Promo Image of 0.3.0 | UPDATE IS HERE! Download on Curseforge.

Citadel 559, The Cyber-City, one of the last big cities standing. Made using mostly blocks from the mod.

0.3.0 is here with brand new mech. Don't forget to check out the Curseforge page to download it.

Most files I hade for this mod (including the workspace) have been erased by Windows. It is currently in pause and will be for as long as I have not recovered my files. For the moment, I'll be developing another tiny mod and a core mod along with it, so stay tuned.

I'm making a fandom wiki for this mod, since there will be a lot of content!

Please help by contributing to the wiki and DON'T DO VANDALISM!

You can visit it here (might be blank for now): https://minecraft-java-edition-battlebot.fandom.com/wiki/Minecraft_Java_Edition:_BattleBot_Mod_%26_Map_Wiki

If the link expires, please inform me of it at Herobrine2td#5033 on Discord.

The mod is currently in beta. You may experience glitchy stuff and some features are still experimental. Please read the version's patch notes before downloading it.

Hello, as this is my second time writing an article about a mod (but first time about a minecraft mod as I haven't shared any until now), I might not be completely clear with what I say. Plus, i'm French, and even though I speak english very well, I may make some mistakes while writing. keep that in mind.

Also, this mod isn't made for survival but rather adventure, as it will be used in an official map by me, and so, most items cannot be crafted or obtained in survival mode.

Finally, don't reuse any of the mod's content and reupload it anywhere. You've been warned.

/!\ IF THIS MOD HAS A NAME SIMILAR TO ANY OTHER PROJECTS, IT IS PURELY A COINCIDENCE. /!\

FORTHCOMING 2085 is a mod made by Mark XIX Games (of which i'm the leader) and its purpose is to serve as the main mod required for a map of the same name, which is currently not available to anyone. It originally was made for Bedrock Edition until I decided to move to Java since it's way more flexible. I decided to upload it here for people to tell me what to make, what to remove, and what to change so that the experience you'll have playing the map is as good as possible.

FORTHCOMING is a science fiction mod based in 2085, and an invasion of extraterrastrial beings named Rebexers is currently going on in multiple human colonies and Earth. You'll have to stop them from taking Earth's resource again. To do this, you'll have a bunch of weapons at your disposal, including those from other alien factions such as The Rebexers, the Infested, the Lazhars (extinct) and many more. You'll even have a Mech at your disposal starting from 0.3.0.

It also has its own unique Official SoundTrack that will play when you are in the maps. As of 0.3.0, To hear any of these, you need to type the following command in the menu:

- This is the full list of currently available musics in order (ranging from 1 to 14):

3.Here they come, our murderer

4.Where is everyone (Unreleased)

5.Don't let them get you

13.This is The Warlord

. The soundtrack is available here:

As mentioned previously, you'll have lots of fancy weapons to help you stop the Rebexers, ranging from concussion rifles to one-shot divine blades. However each weapons are classed by rarity:

There are around 50 weapons as of 0.3.0, and so they will not be listed here. These are some of the weapons available: 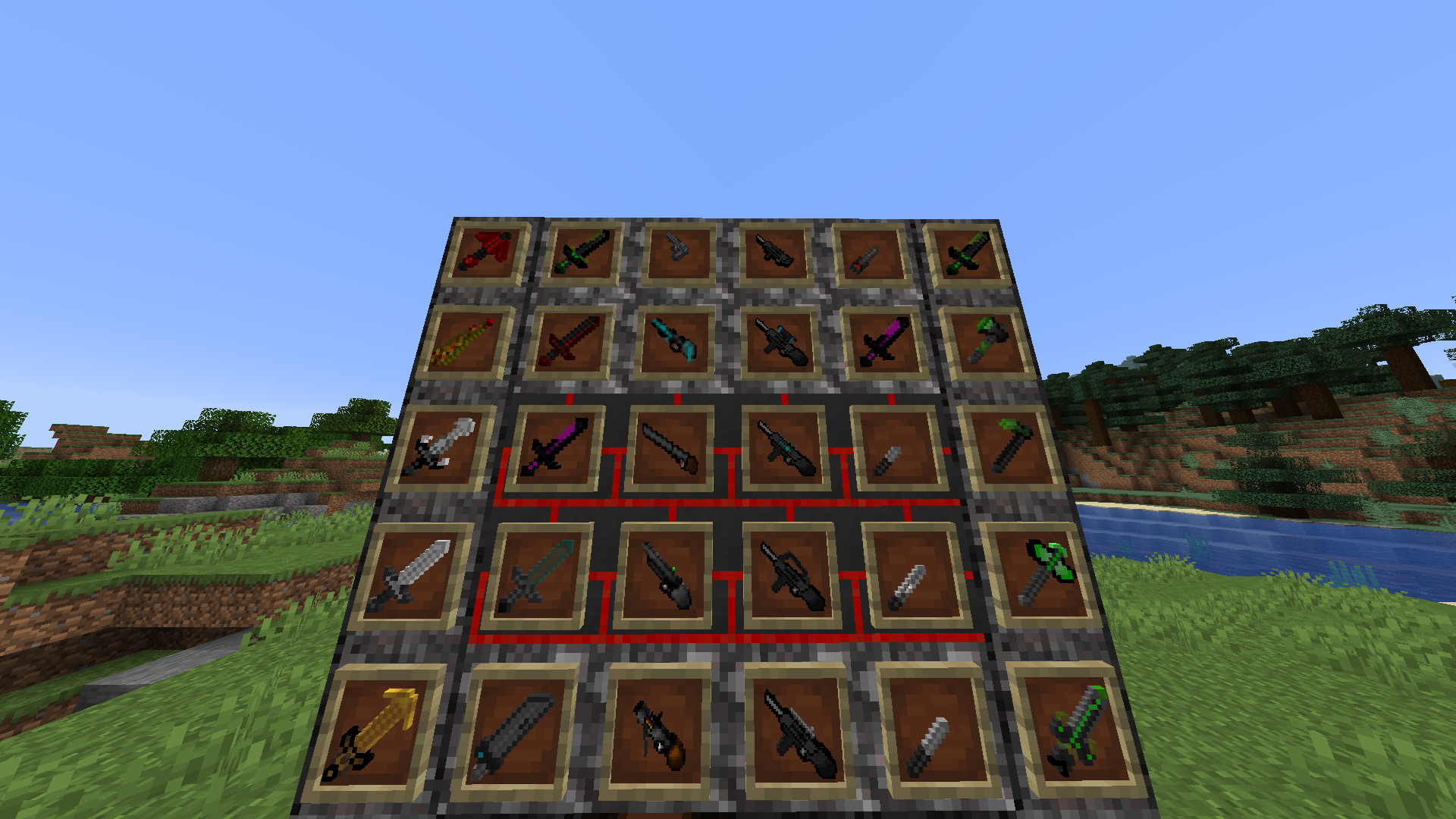 The mod also contains multiple items that, when the mod is complete, will be used to buy, craft, and store items.

- EM: This is the main universal currency in the galaxy of BattleBot. It's used for buying weapons, armors, items, etc. It will be found dropping on some enemies.

- Portable Anvil: The Portable anvil is currently a W.I.P, but its intended goal is to be a... portable anvil, and have a few inventory slots. Pretty useful.

- Energy Potato: The energy potato is a consumable that will regenerate your health but is also infinite. Awesome right? Inside of the map, it will be one of the only food resources available.

- Zero Core: The Zero-Core is currently the rarest item in the mod, it lets you upgrade some weapons greatly! Currently, the Flesh Spike, the Vayking Sword and the Broken Deystrakt can be upgraded with this item.

As said previously, along with the arrival of those shiny weapons, enemies and allies will block your path. Here is the list of all mobs:

- Armored Rebexer (Has multiple drop variants; will soon all be merged into one entity with loot table) -

There are a lot of blocks to build with in the mod. I won't go over them all, but there basically are blocks like Neon blocks and Computer Blocks, but also Marble Plates.

0.2.0 WILL BE RELEASED LATER THIS SATURDAY.

This update comes with tons of new weapons and a few more mobs and also a major texture update!

Added the Combat SMG, that is currently the fastest weapon of the mod.

Added the Arm Cannon, the default weapon of Rebexer Drones.

Added Betalite tools, which will only be available in the beta version of the map, when it comes out.

Added the Titan Sword, a sword of 1.2 attack speed and 23 attack damage.

Added the Quickpull Knife, with 2.5 attack speed and 4 attack damage.

Added the Throwing knife, which can be, well... thrown.

Added the Switch knife, which is the same as the quickpull knife but shorter and with 4 attack speed.

Added the ZC Version of the Vayking Sword, which is red and stronger.

Added the powerful EP Grenade, which could kill you if you are not careful. Uses the Stun effect.

Removed the Keterite Pickaxe and Shovel.

Removed the Lazhar Pickaxe and shovel.

Added the Common and Uncommon crates.
- They will all drop items of the crate's rarity.

Added Hunter, one of the major allies of the mod.
- is practically immortal (might be changed)

Added The Enforcer and his exterminator variant, which are the Rebexer versions of the Iron Golem. The Exterminator Enforcer is a boss variant.

Added the Stun effect
- makes you stop being able to move.
- constantly gives you damage.
Changed how most keterite, titanium, cube dust and Lazhar weapons work.
- Axes are faster but weaker than swords.
- Hoes/Reapers are slower but stronger than swords.
- Swords work like vanilla swords.

The textures of most the Keterite, Titanium, Cube dust and Lazhar weapons have been reworked to look more like what they should look like.

The grenades should now do damage.

The Sunstick should now give the Stun effect.

RX-77's weapons appear to not appear. This will be fixed soon.

ok apparently the images bugged out lol. fixing that now

I like the mod, and I think that if you gave us more explanations in the description for example the Health, Attack, etc of each mob, or the utilities for the items, for example, the crafts, this is a pretty original mod but I think these things can help it become even greater! Gl in MTW (Mod of The Week)!

Thanks! I'll try to make the description more precise. yeah i'll try to get it to MOTW when it's more complete. And as for the crafts, most of the items here are made for an adventure map coming in a long time so it's not truly supposed to be crafted although i'm planning to make a survival mode version of it!

Well I added stuff some time ago but I made an actual wiki page for the mod since it will be quite complex! If you can help contributing to it, it would accelerate the speed of making the Wiki!
It is available here: https://minecraft-java-edition-battlebot.fandom.com/wiki/Minecraft_Java_Edition:_BattleBot_Mod_%26_Map_Wiki
If the link doesn't work, you'll find it at the top of the description of the mod.

Should I try to put this on MOTW?
Tell me below if I should.

Looks really, really good you should submit for MOTW (mod of the week) :)
Sadly I can't download because my computer won't work with mediafire:(
So please sign into curseforge and upload it there so I can download :l

Thanks! and yeah, originally it was on curseforge but since they take so long to approve (don't worry i know they have a LOT of work) i decided to put it on mediafire for now.
I'll submit it now.

Hey, i've finally put the mod on curseforge, and the newest version is available there!
link: https://www.curseforge.com/minecraft/mc-mods/forthcoming-2085-the-invasion