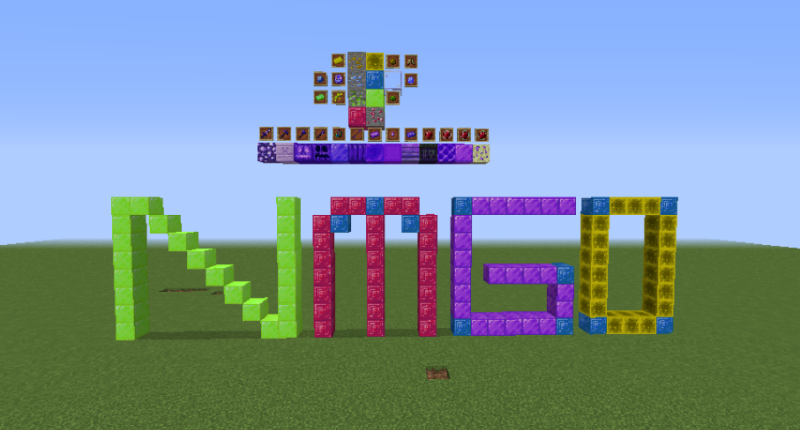 Are you tired of seeing the same old enderite or ruby mods all the time? Well it takes those generic ores and twists them into this mod.

Ruby is a pretty, rare ore found in the overworld, and can be used to make different types of charms.

Those charms are Fly, Swiftness, Jump Boost, and Strength. You might say these are overpowered, but its pretty balanced due to the recipes, durability, and the cooldown.

There will be more uses for ruby soon!

Endium is obviously, found in the end. It can be used to make tons of decoration blocks, for example endium glowstone or endium jack-o-lanterns.

But thats not the only use, if you surround a smithing table with endium blocks you create the Endium Table.

The endium table is used to mix things (not alot of things), for example, putting a diamond or netherite or enderite sword with a uranium gives you a poison tipped one.

But, thats not the main reason why its there, take a endium block and combine it with a netherite ingot and you get a enderite ingot.

Do the old smithing table stuff, and boom. You got enderite tools and armor.

There will probably be no updates other than bug fixes to these ores, i think they are good for now.

Sapphire is a extremely rare ore found in the overworld, and is similar to ruby.

You can make sapphire glass by putting glass in the middle and sapphires on the sides. It is a hardened, blast resistant type of glass that is used for decoration, and trapping?

If you put the three blues (diamond, lapis, and sapphire) together you get an enchanted sapphire, its basically a forever healing charm.

You can make an enchanted

There will definitely be more uses for sapphire soon.

Sulfur is a uncommon ore found in the overworld and found more commonly, the nether.

Breaking one sulfur ore will always give you 2 sulfur.

You can use sulfur as bonemeal.

You can make gunpowder with sulfur with coal.

You can make explosive boots by hardening sulfur, used for dangerous transportation.

You can harden sulfur.

Not sure if sulfur will get more uses.

Uranium is a uncommon ore found in the overworld.

It is ingot based.

If you walk on the ore, it will give you poison.

Its used to poison tip diamond+ swords in the endium table.

You can use uranium ingots and hardened sulfur to create a uranium bow which is basically just a strengthened poison tipped arrow, and it also has a chance to blow up things.

You can crush uranium into dust, its the ammo for the uranium bow.

Will get more uses for itself soon.

Thats all for now, if you can give me any more generic ores put it in the comments.

The best original mod ever :)