We Presents To Everybody The Pr. Villatrick (Modding Help)

Hello everyone! Do you know the Pr. Villatrick? Maybe a lot of people do not know him, but i want to presents to you this teacher, who should help somebody with a issue in modding, or other.

Knowledge with our new teacher

Hello my students! I am the Pr. Villatrick, for help you in modding! I make physics and mathematicals lessons, so i can not help you everytime. Something? A issue with your mods (or quite simply export your image)? I can help you for it!

I exited my village because the technology was very bad, and i go to Multi-Villagers Academy for learn more about the newers inventions made by indie creators, and make me too my myself invention a day. During i made my machine, a Illager Raid go to attack the city, and i must exit my house with my invention for do not lose that i make, and i comes into a base with Iron Golems, and the City Master, who announce a battle for some days, because the Illagers searched a most advanced technology, and i am decided to go far away for make with peace that i want to make.

Nearest of a big desert, i installed my own high technology base, and i work about my project. With some wrong moments who degrade a little that i wanted to make, i finish, with pride, to clear my work, and i released my project in a city. After they joke on my project, somebody defended me the humans make bad fun with our noses, they becomes shameful, and accept the release. After some days, hundred peoples greet me with respect, and thank me very much. It was a Mechanic Nose, with special functionnalities: When you breath with it, you breath a perfume. When you have coals, and if you are in difficult, you can use your nose for breath fire on your enemies. When you use potion for your nose, you can breath the effects into anybody (healing effect for undead, poison and slowness effect for witchs and regeneration effect for your friends).

Now, i work with students, and maybe one of you are one of my students, i do not know, but i would like me too to meet you.

- How to i make mobs with flying AI? It is simply: In MCreator, check the Bat AI, or if you want to DESTROY EVERYTHING, check Wither AI. Okay, but these mobs have also their behavior, but i do not want by example i maked a bird and this last go to be reversed like a Real Bat! Here, i don't have the reply for you, but i have something for made your mod a special mod: When your mob go to the Player, and if this last have a TNT in his main hand, the mob will EXPLODE! Oh! Cool! I want to have this mob in my mod! But how to make this event? For do not make a long lesson, will send here the image quite simply.

Good! Here, i explain to you how to make a procedure who make this action. I explain also other things, for you understand a lot of things in MCreator.

Note: For goodly see this image, you can make a "right click" on the image and open it in a other page.

- I would like make a mob like Witch, but, after put the Witch AI, i do not know how to add the good procedure for this mob have more effects. You can go to "On mob tick update" for this mob have sometimes the effect that you want, or "When mob is hurt" for the mob have effect when hurted. Thanks you, but i know already it. That i want it is a mob drink sometimes potion and have effect (with random probability). I can not make a mob drink a potion, but your mob can have effect with a procedure. And also, i want the mob when it burning in lava or fire have sometimes fire effect for be immune to the fire, and speed effect when it walk. Keep your speed effect in "On mob tick update" without walk action, because your mob will move anywhere, so he will have your effect, just see this procedure for goodly understand.

In this image, you can see below on it we explain ticks in Minecraft, because like many games, Minecraft have ticks, like a lot of programs executed in game. A tick means 0.05s, and a day in Minecraft (or a night) means this operation to calculate: 24000 (Number) x 0.05 (Tick Time Value) = 1200s. The ticks are very important in the game, because they can load the chunks, the mobs behaviors, the spawn of some structures etc... Without this rule and the execution of many programs, the game is locked, and you can make this experience in put "despawn entity (Player)" in "When player collides with this mob". For load the chunks, it is denpending on the ticks, who depending too of the computer's power (puissance in the image), because his power is low, less ticks, so wait very much to load the blocks and entities in the provided chunk. We take for our example a diagram, wth the player in the center, and seven tiles for each direction in cross form. 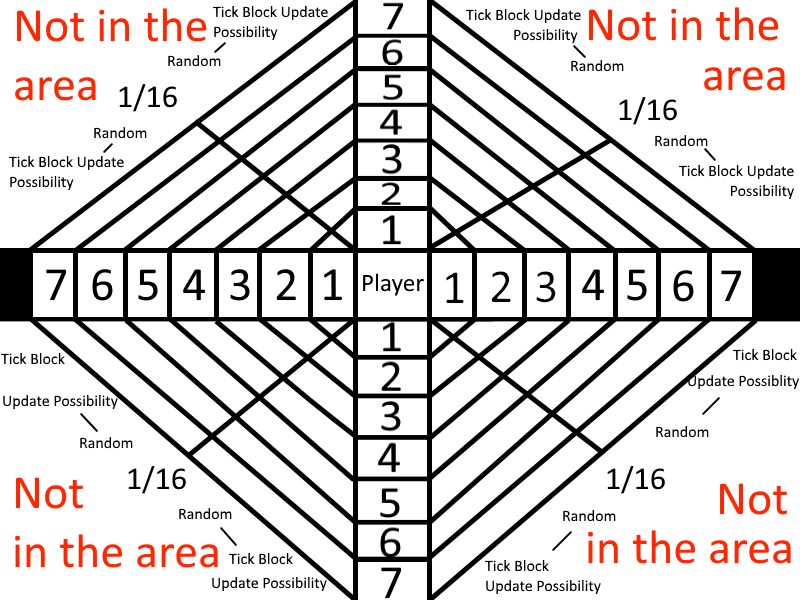 Uh... It is a little long and very hard to read this table!

I know, and i will explain that this table means.

Here is the seven sections radius in this table, with some more things added. The Player is in the center, and a cross in column form with the chunks, for indicate to the machine that is necessary to do. With 1/16 (like writed into the boundary of the table) can be selected, and, to the higher block (chunk) of the column where is to apply a update (by example in an icy biome, the water is transformed in ice block), and with a 1/100 000 probability, during a thunder, a lighting can befall anywhere in the chunk. To each tick, in a seven chunks radius around the player, three blocks positions are randomly selected in each sections. If a block is placed on one of the three positions, he receives a Block Tick, but it is can not be updated (by example a stone block or a sandstone block), this tick is ignored by the blocks who can not be updated. A block who can be updated is by example a Farmland who becomes with water a Farmland dehydrated or without water source a Dirt. It is very important to know that, because the Ticks are together the Time's compositors in Minecraft, so i would like you know i little that i learned to you.

MCreator's other tricks and more about Minecraft

Here is some tricks on MCreator:

Minecraft is mostly filled of blocks, and have entities who can interact with the environnement. The player is the main entity of Minecraft: He can do more than others mobs, and is it who more interact in the game. For interact with the environnement, a lot of programs are charged to make understand to the computer the actions, the conditions (If, Else, Else If), the Models, the Chunks etc... When the player break a block who can be used, he can use it for crafting, the second part of actions in the game and who becomes very important to the progress of the player. That the mostly peoples know in Minecraft it is the Creative Mode (and maybe a little the Survival Mode behind it), because it is not widespread (or very low quantity) before this game going, so a lot thinks this game shows the best for the Sandbox, even later a lot of video games take this important example now known in the video game (even if at 80's and 90's times some video games had a level editor, like Battle City by example). When a game have success, he add more on his game engine for have more players, and you do not know i want to says? When Minecraft launch this mode, the Creative Mode, very much make video games based on it, and the big Fortnite too! Even in Fortnite the goal is launch the Battle Royale Mode like Minecraft launched the Creative Mode, Epic Games want to have more players, even for hurt Minecraft, even the community, for bring them back in their plan, a good trap for make a concurrence between it and an other video game with a special value, like was Minecraft before, so goodly is take that a video game had proposed a very good something before.

Thanks you very much for readed this very long topic, i worked since maybe FOUR HOURS for make it!

You can support me without mention me EVERYWHERE but write message only in my topics (i can know if i have a new message too) and speaks also about the topic title.

Director of the work: Nouyoule

Script (in the first subject): Nouyoule 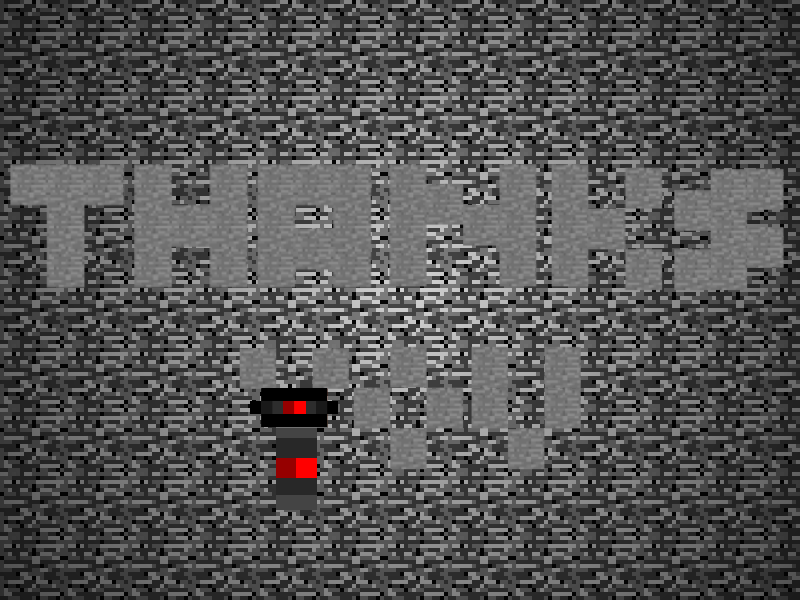