Looking for ideas for a badlands mod

previously, I started a forum topic: a poll on what biome you guys want modded... and the biome that won is the Badlands.

ok, to be honest, I was quite glad (explanation in the last 2 sentences of this paragraph) that the badlands won. I sometimes hate surviving in the badlands as the only good food sources are apples (which are rarely dropped by oak leaves) and fishes (acquired from fishing in rare lakes). but despite that, I like how the biome is rich in gold, terracotta, and red sand, and has a really cool terrain generation with all the hoodoos, mesas, and plateaus. so, this might be an interesting mod to make, I think, and I'll be trying to make this mod:

I've been thinking of what features to add lately and these are the things I've come up with:

and so far, I've already worked on the following features:

but I also need to know the things that you guys want to see in a mod like this (which is the point of this forum topic). let me know what you want in a mod that would aim to improve the badlands biome, and I'm most likely gonna be reviewing your ideas and try to add them :)

P.S. the mod is named "Betterlands". get it? coz it'll be trying to make the badlands better

hmm, u guys want me to add Old West towns, bandits, revolvers, and stuff related to the Wild West instead of the badland civilization? if i will, i'll most likely make original implementations of them to make my mod different in a way from what other mods might have already done. (it's an idea after all; anyone can be inspired by it. maybe the execution of the idea is what matters more and where copying code and assets is unacceptable, but of course i hate to copy those kinds of stuff.)

but if i do all that, i might scrap the idea of making a unique race (the one that built a badlands civilization from the ground up) inhabiting the badlands but still keep the structures (such as temples) they built so as to be "looted" by the bandits (by that i also mean bandits might spawn near badlands structures w/ loot).

so, which idea do you guys prefer? Wild West, or an entirely new civilization? coz i'll only be adding one of them ;)

i think that you should make the new civilization, Wild West is something that people is used to see, but the civilization is something new and you won't have limited things for it like with the wild west idea, because everybody knows how wild west is and would espect what you are going to make. Also, creating the new civilization allows you to create revolvers or bandits if you want, so that is not something that only wild west can have. I personally don't see any reason for no creating something original that, if you make it well, people is going to love.

And my mother language is not english, so if I have said something wrong or that doesn't make sense try to understand what I'm trying to say.

ooh, good thinking! as for the Wild West being something that people are already used to seeing, for the past 2 days I've concluded (after remembering SystemZee's video about cool badlands update ideas and also checking out badlands themed mods) that the wild west is something quite predictable in a badlands mod, so it's great that you also pointed out something similar. yeah, this WIP mod isn't named "Western Additions" or something similar and be focused solely on it, but since people might be able to already smell new wild west content just by looking at this mod's title once it's released and possibly assume that the mod might touch on the said ideas/theme, i guess the thought of adding the original civilization is something that would break their expectations but would still make the mod fun nonetheless, if I do it right.

And my mother language is not english, so if I have said something wrong or that doesn't make sense try to understand what I'm trying to say.

it's fine, i understood the things you said. i appreciate your English-speaking effort very much, and thanks for sharing your thoughts on this! i will be brainstorming stuff about the civilization now :)

yes all of those ideas are good, but maybe could you also add flowering cacti variant? this would make cacti more beautiful

What about some structures similars to the dungeons (you know, the monster spawners) but with some type of bad villager of your new civilization? I think that it would be a good idea and could be the only way of getting some rare item, like the heart of the seas in the buried treasures.

yeah, a flowering cacti variant will most likely be added, as well as other cactus variant/s i can think of, and all of em will have custom block models to not look odd

interesting. I'll keep that in mind!

just here to disclose some updates about this mod

about the civilization I mentioned, I've already started "worldbuilding". so far... I've only thought of the qualities and appearance of the new race, as well as how their communities would look and operate, and already started building prototypes for the structures that their village will include. also, been thinking about how their crafts would look like. i'm trying to make all of it be based on the theme of the badlands and how they dealt with the biome's conditions. all in all, there's been some progress, but I'm just halfway there, and this is kinda hard ngl :/

as for the mod's release... I feel like releasing a pre-alpha version soon. maybe once I finish retexturing/remodelling some stuff and adding a few more features/functionalities ;)

You could add some plat in the badlands that provides food to the civilization, so they adapted to the to eat that (the plant is probably a bush because its a badland) or there is some type of bird or lizard that they hunt for food. For the structures, badlands have a great color palette that you can use in your favor. They won't have a lot of wood, but they're surrounded by awesome blocks that would create some great houses. And also there is a lot of gold in this biome, someshing that you can use for decoration blocks or even the village buildings.

Sorry, i wanted to write plant.

@bananarang_mods, in your opinion, does this look good for the topmost block of a flowering cactus variant? :) 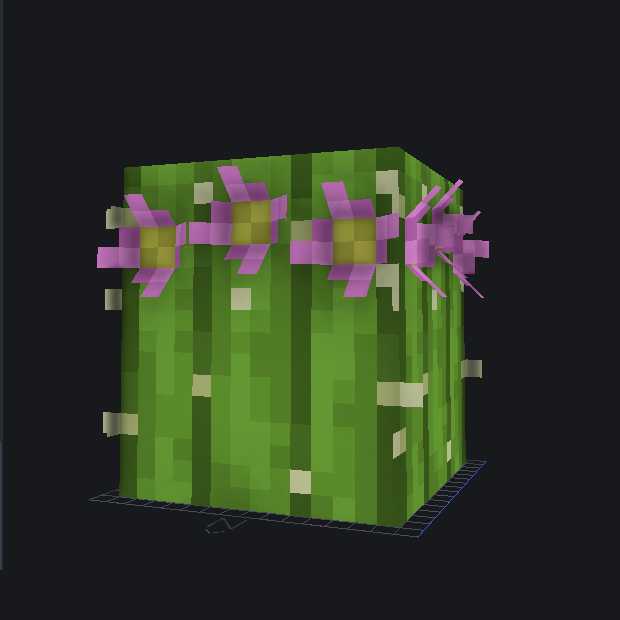 Well, I'm not @bananarang_mods, but I say that that looks great.