In this forum topic I will write the main ideas, categories and additional information about the mod which is in progress. This is an adapted version of an idea that I got, which had a lot of support but ended up being an unrealeased project (https://mcreator.net/forum/43534/hand-god-mod).

This mod consists of bringing mythical beings from different mythologies (although 8 are the main ones) which will be used to make offerings and receive blessings in the form of resources. The main mythologies are Japanese, Chinese, Celtic, Norse, Egyptian, Greek, Mayan and Hindu. Each of them has its respective ore, tools, decorative blocks and gods. For this mod I took as inspiration certain references from videogames like Pokemon (for the name of the elements of the spirits), Smite, Myths and Legends TCG, Age of Mythology, Megami Tensei, Valheim and animes like Record Ragnarok and Vinland Saga. The main mechanic is similar to the bees in the Forestry mod (which is not yet available for version 1.18.2), that is, naturally generated materials that must be obtained with a specific tool in order to create sustainable farms of basic resources through merges, but in an easier and more sustainable way.

All of them are found in the underground of any biome, under a certain depth and with a variable rarity. 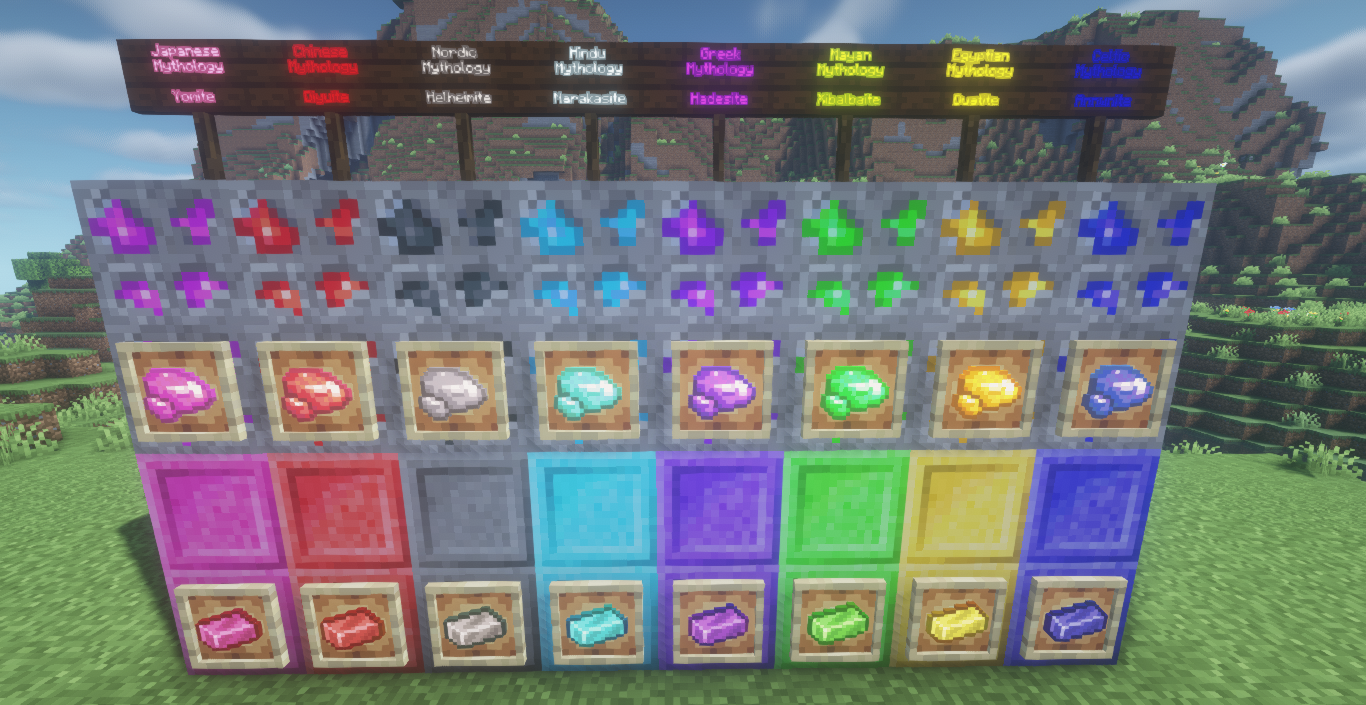 Even if it seems like quite a number of ores, each of them has a constant use, which can be used in weapons, decorative blocks, and as the main material for offerings. Each of these weapons are found to be higher in quality than iron but lower than diamond, and their usefulness varies in number of uses depending on the rarity of the ore. This does not affect the natural progress of Minecraft, allowing the iron to be used for other functions, such as armor, tools or items from other mods.

In-game Screenshots (Each weapon and decorative block are placed on top of the respective mythology and ore it uses): 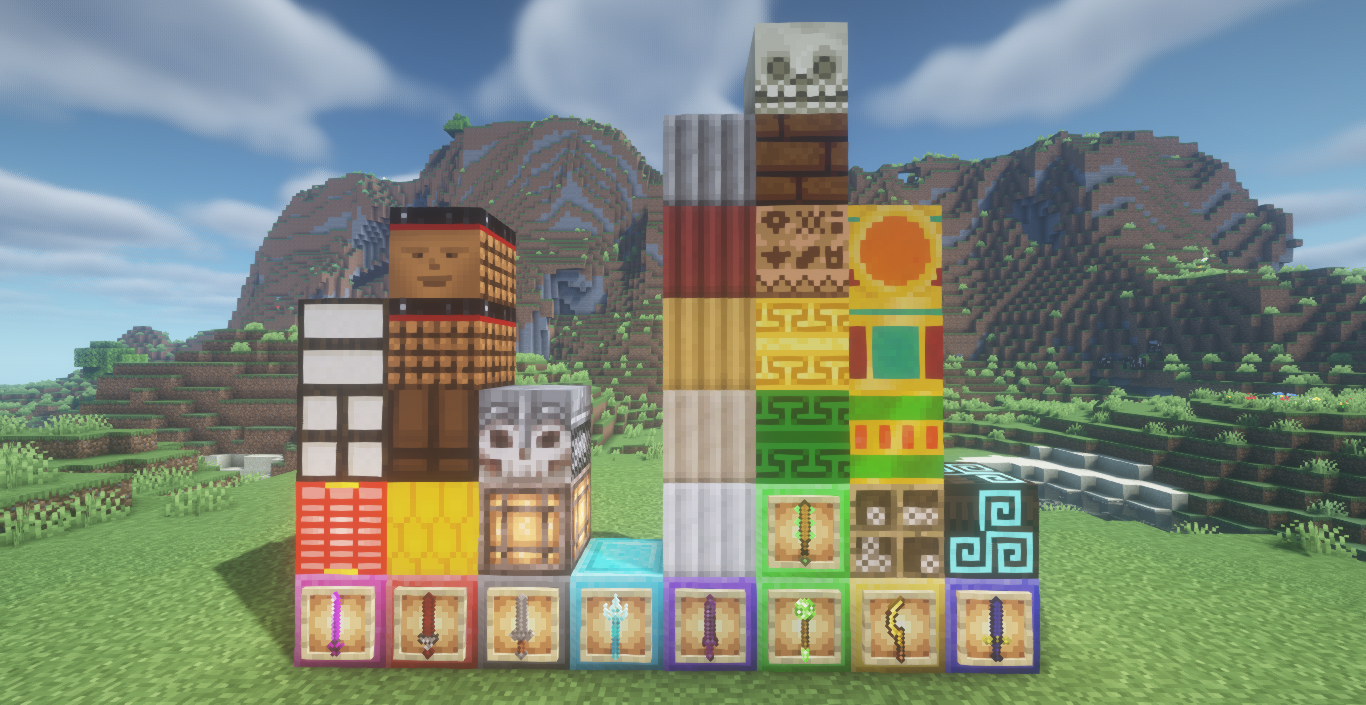 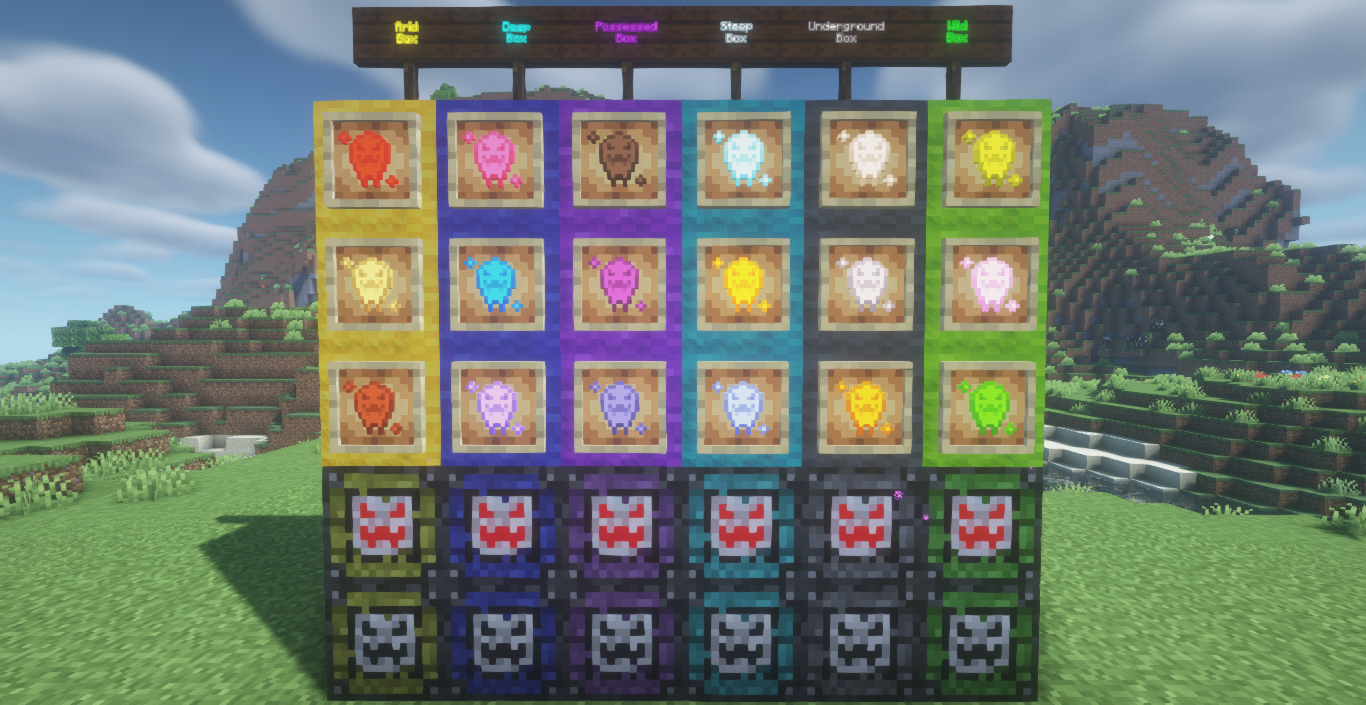 Once the respective spirits have been released using the grimoire that works as the main resource for the other two most important blocks of the mod, you can start creating gods through specific spirits. 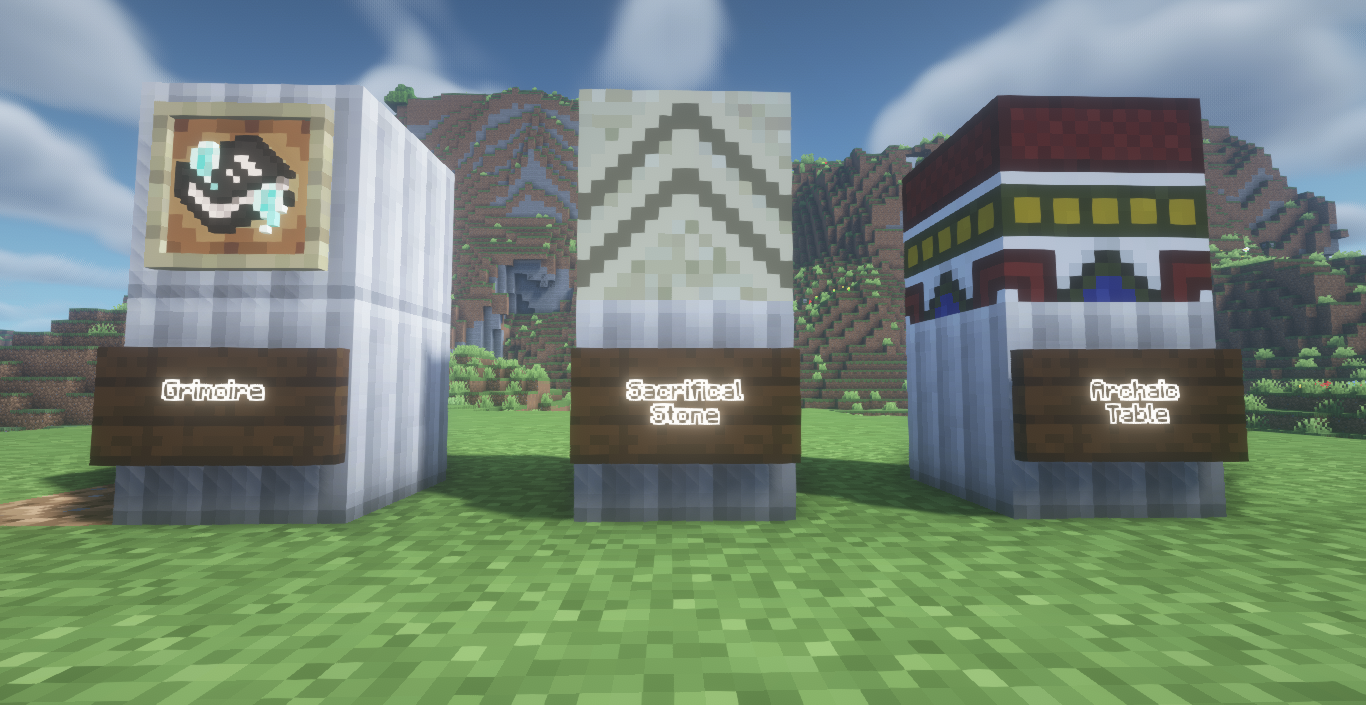 The sacrificial stone is used with the right click on it, using different spirits we can create gods following patterns of specific spirits (those that will be specified below in the recipes). 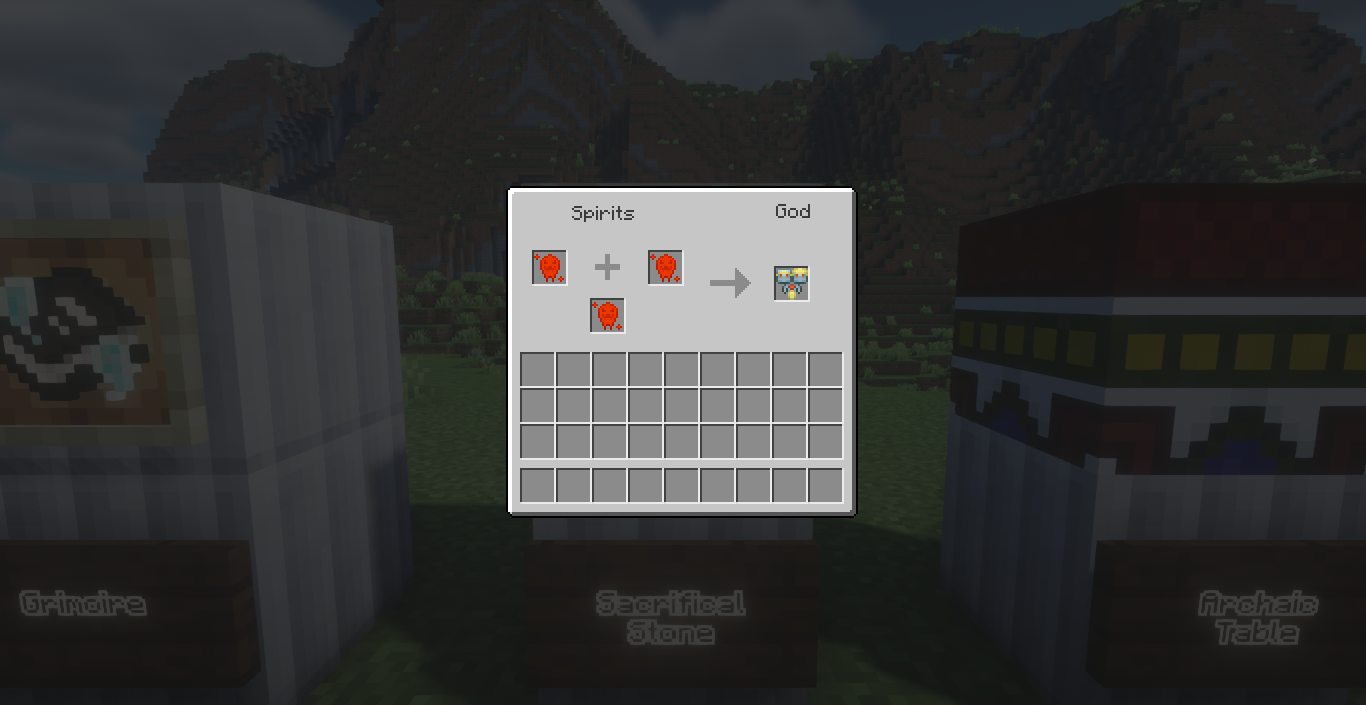 Once the god has been successfully made, we can right-click on the archaic table, which will allow us to make tributes and if the correct one (from the corresponding mythology) is used, we will be able to obtain resources constantly, since through this action the god it is not consumed and the process can be repeated as many times as you are willing or able to pay. 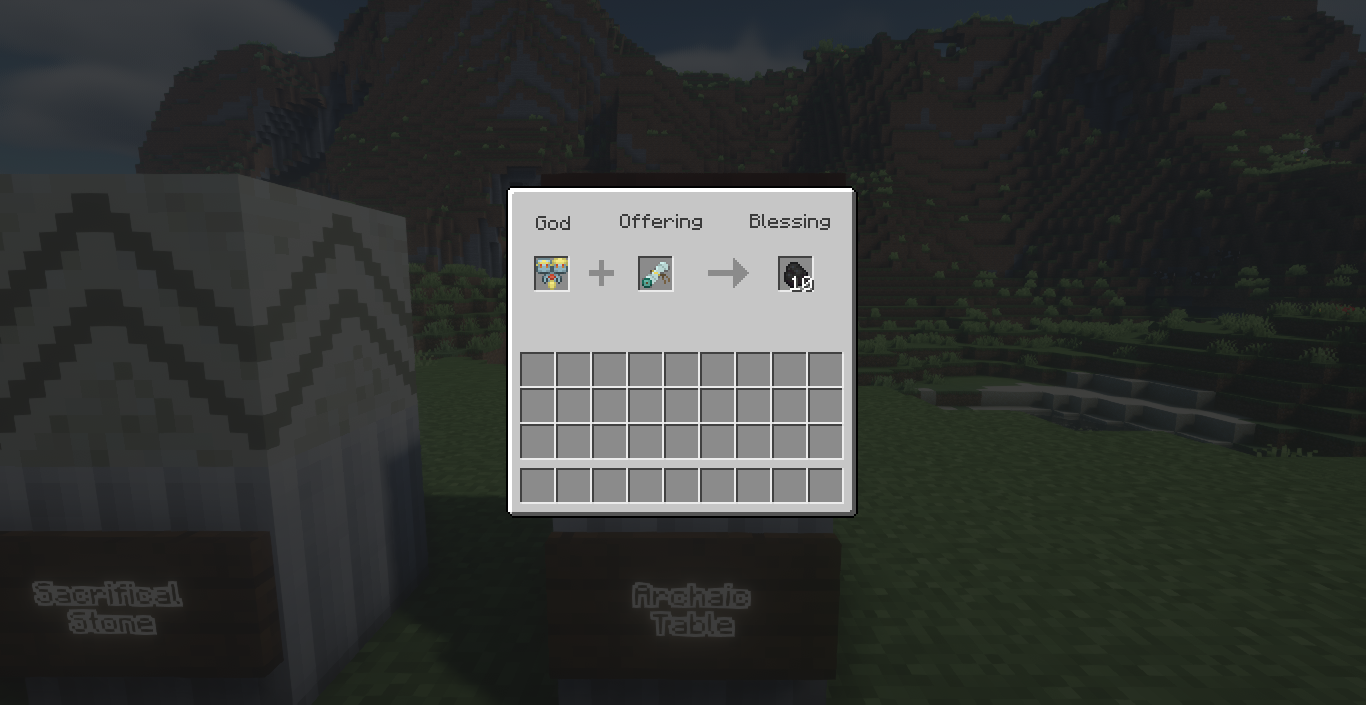 Each god offers its own resource as well as each god is created with different combinations of spirits. Gotta catch em all! (The gods in the image do not reveal the current amount, only those made at the creation of this topic are found). 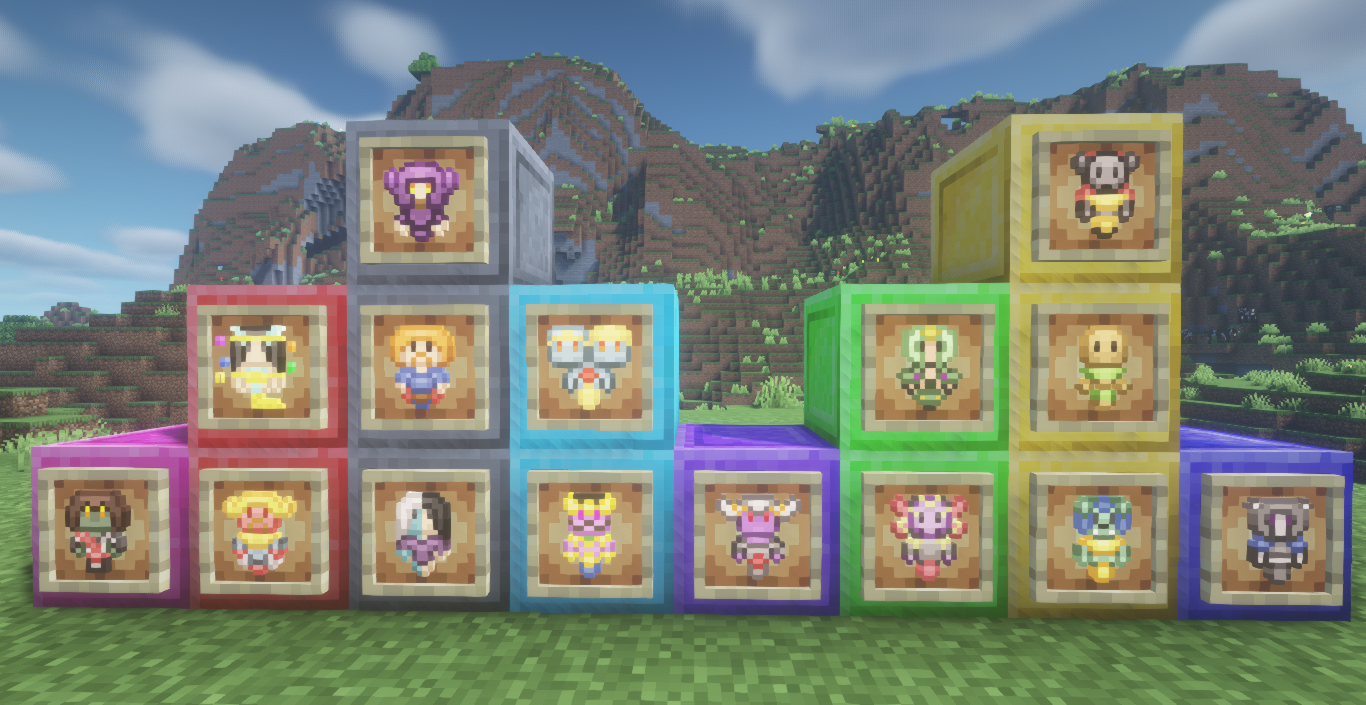 This mod is expected to be played with the integration of Just Enough Items or any of its variations for any crafting done on the conventional workbench. The recipes and results for the archaic table and the sacrificial stone (the spirits will always be in alphabetical order to make a sacrifice, so you can try to make any combination you want!) will be found in this category: 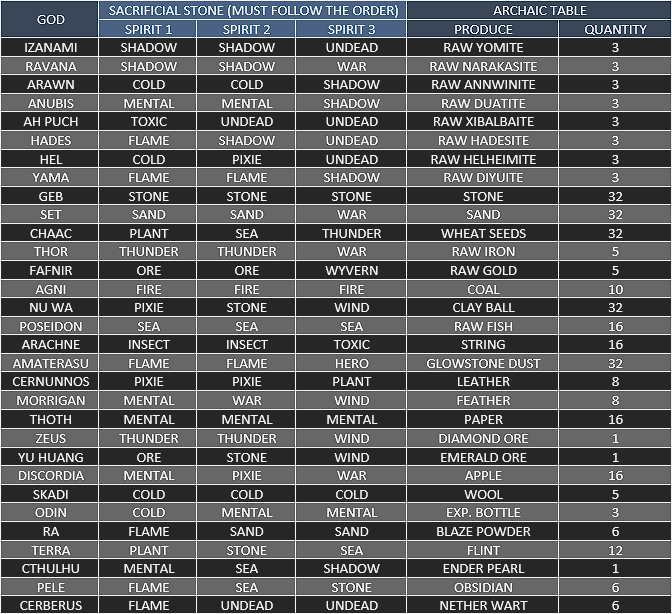