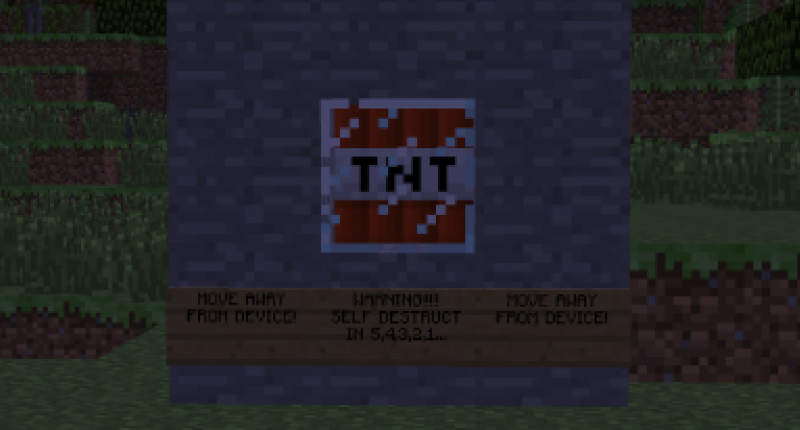 This is my first Minecraft mod with Mcreator, and I know it is nothing too great, but it's something for a first mod. This mod does what it sounds like it does, it adds a command to self destruct. You may be wandering why anybody would need a self destruct mod in the first place. Well, there are likely more reasons, but for example. Lets say you were stuck in a Mineshaft, and you just wanted to get up, even if it means losing all with you at the time. If you didn't have a pickaxe, then you couldn't dig up to the land, and that's not a safe idea anyway. This command might be your only option, so you might as well use it if you are that desperate for the above world. This command will blow up blocks around you, since you are self destructing. That is the only thing in this mod, and I will more than likely make more mods in the future, so stay tuned, and also tell me if there is anything you might want me to make in the future!

How to install the Self Destruct Mod for Minecraft 1.6.4

1. Install the recomended version of Minecraft Forge, but make sure it says that it is for 1.6.4 before downloading.

2. Install Minecraft Forge by downlading the forge installer. (You can use the real file,but I would use the installer)

4. Go to search and type %appdata%

5. Go in the .minecraft folder.

6. Go to the mods folder. (If it is not there then create a folder called "mods" but don't put quotes in it.)

7. Put my mod's zip file inside of this folder.

8. Go to Minecraft and select the version that says forge.

9. DONE! You are ready to play Minecraft with my mod! Just launch the game using the forge version and you are done!