Murky March of the Elder Things 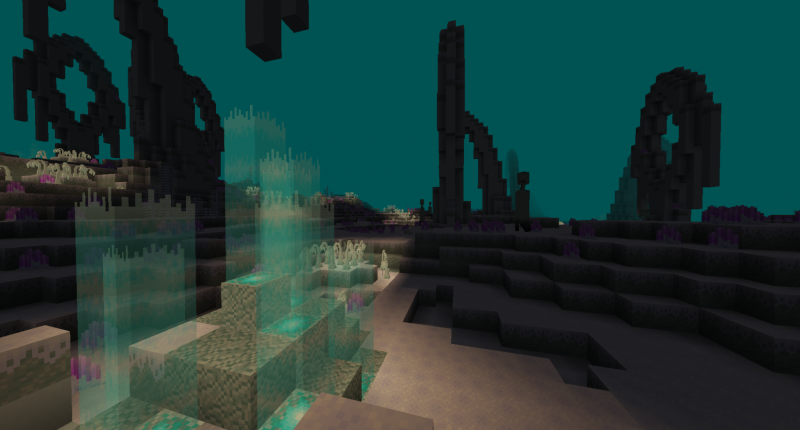 the core of a long lost compound, hidden away in the eidolon plains 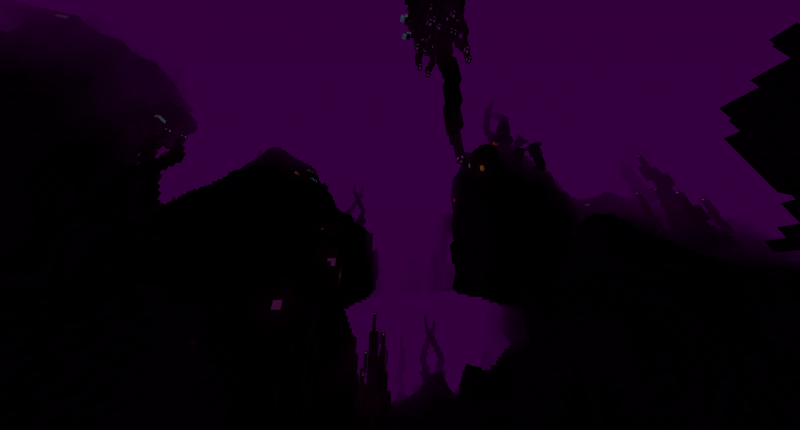 the void, a border dimension made of other collapsing dimensions and governed by elder things

It has always been known that the overworld was not the only world that existed, the nether, the end, there has to be others. other places with there own stories to uncover, resources to exploit and landscapes to explore. getting to those worlds is a different story, but as the sun starts to set you see a strange construct embedded into a hillside you overlooked. a structure made with materials you have never before seen in any of your travels. a structure that reminds you of a portal to a place you have already been. you get an idea and try to replicate these alien resources and repair what you think to be a portal. as you place the last piece of the structure a small blue and green stone sticking out of some foliage falls onto the base and creates a spark that travels the inner perimeter of the construct, lighting it up and proving your theories correct. standing there, washed in a murky light that's spilling out of the eldritch gateway, you wonder what is on the other side. after a few moments of wonder you suit up grab some basic gear and step through into a new eldritch world...

The murky mod is my first mod that i am submitting here and its one that i plan on working on a lot more. it has been inspired by multiple adventure and lore heavy mods and will have its own story told the more you explore and progress through the mod

This mod currently adds three new dimensions with there own biomes and structures dotting the land, along with new mobs to defend them, or to help you out. along with tons of new building blocks, new foods, new tools and equipment and multiple new crafting stations, along with some blocks with beneficial affects. adds multiple new metals and there respective ores along with different variants of other metals and ores. also four new gems.

due to the size of the mod I had to upload murky on curse forge, here is the link:

the murky mod has lots of hints in the form of structures and notes that can be found throughout the overworld and murky dimensions.

to get to the first dimension you can either stumble across a ruined murky portal and complete it or build your own murky portal frame using murky obsidian and lighting it using an Eerie stone, both of witch can be crafted.

to get to the murky depths you need to make a portal frame using icy murky stone and light it using an Eerie depths stone.

to get to the void you need a frame of void glow and light it with a void anchor.

-note: this mod is currently in its early stages and has quite a few bugs and unintended effects and mechanics I plan on refining and changing at a later date.

-note 2: Its also highly recommended that you use JEI for mod recipes.

added more ruins to the murky

added new structures to the nether

added a mystery candy with good and bad effects

changed the placement of new torches to mimic vanilla torches

made the piano encounterable in survival

changed the recipie for the void anchor to require shadow fabric

removed respawning in the murky dimension

made festering vines quicker to mine

added a missing recipy for the murky crate

fixed essence condencer so that it eccepts essence from more sides

re added lumiburst item as a projectile for the runic caster

tweaked the model and texture of the stalker mob

changed murky nettle so its quicker to harvest

added sounds for the gargantua angler

added magmablock structures to the bottom of the murky depths

made some mechanical blocks properly update when blocks nearby are changed

made crimson fruit pods easier to mine

added sounds for the amalgamation

fixed the colision box of some elixers

changed the icons for some creative tabs

changed the recipe for the void anchor

added a third machine, the alchemical burner for purifying flasks of water and making elixirs

added luminus flasks that can be filled with water

added the ability to purify water in a lumiflask

added the ability to place lumiflasks and elixirs as decorations

elixir of the traveler

elixir of the attacker

elixir of the defender

elixir of the hungry

added 8 types of pikes for combat

cleaned up and organised creative tabs a bit

added new foods (some with effects)

fixed murky nettle pod not breaking when the stem is broken

added new drops to some plants

tweaked the spawn rate of a structure

mimic: a creature that waits for you to make a mistake, hostile.

possesed sentry: a being of soul and machine, manufactured to defend there home, hostile.

gargantuan angler: a creature that stalks the frozen over parallel murky dimension , waiting for some unfortunate soul to try and steal its treasures, hostile.

lumiwurm: a wurm of unknown origin made from lots of energy souls and luminus stone, hostile boss.

Wow! Looks like a very cool and interesting mod! :D

if you find any problems or balancing issues please comment about them here, i'm currently trying to stomp out all the bugs i have currently run into and re-balancing some mobs and items. And thank you for checking out my mod :D

I haven't played much, but I saw that there is a lot of block in the portal structure in overworld that should destroy if block below them is destroyed, but they don't. Examples are Biomass Torch and Festering Vine. I hope this gets patched (also I hope that I don't have an outdated version on the mod...).

Haven't had the chance to play it but looks very cool :)

Awesome mod! The models are fantastic, both the plants and the creatures. I especially like the spider-chest-mimic animation. The dimension is vibrant and interesting. I would submit it for MOTW if you haven't already. Well done!

Clearly I spoke too soon on that YouTube video of yours!! I saw this in my own mods "Similar Section" and just found this! Now I might actually get a good view of the mod from the inside! Guess I'll update my own comment when and if I get a chance to try it out!

Congratulations for winning Mod of the Week :)
This mod is just... wow. Every dimension deserves a MOTW on its own, but together they are the perfect trio. Great textures, awesome models and just overall a great package :D

Me and my friend are putting together a personal modpack that we are going to use on my server. All mods in it will be Mcreator Mods, including our own, and I am definitely going to put this one in!

Awesome mod and congratulations for MOTW :)