The rusted abandoned set that can be found 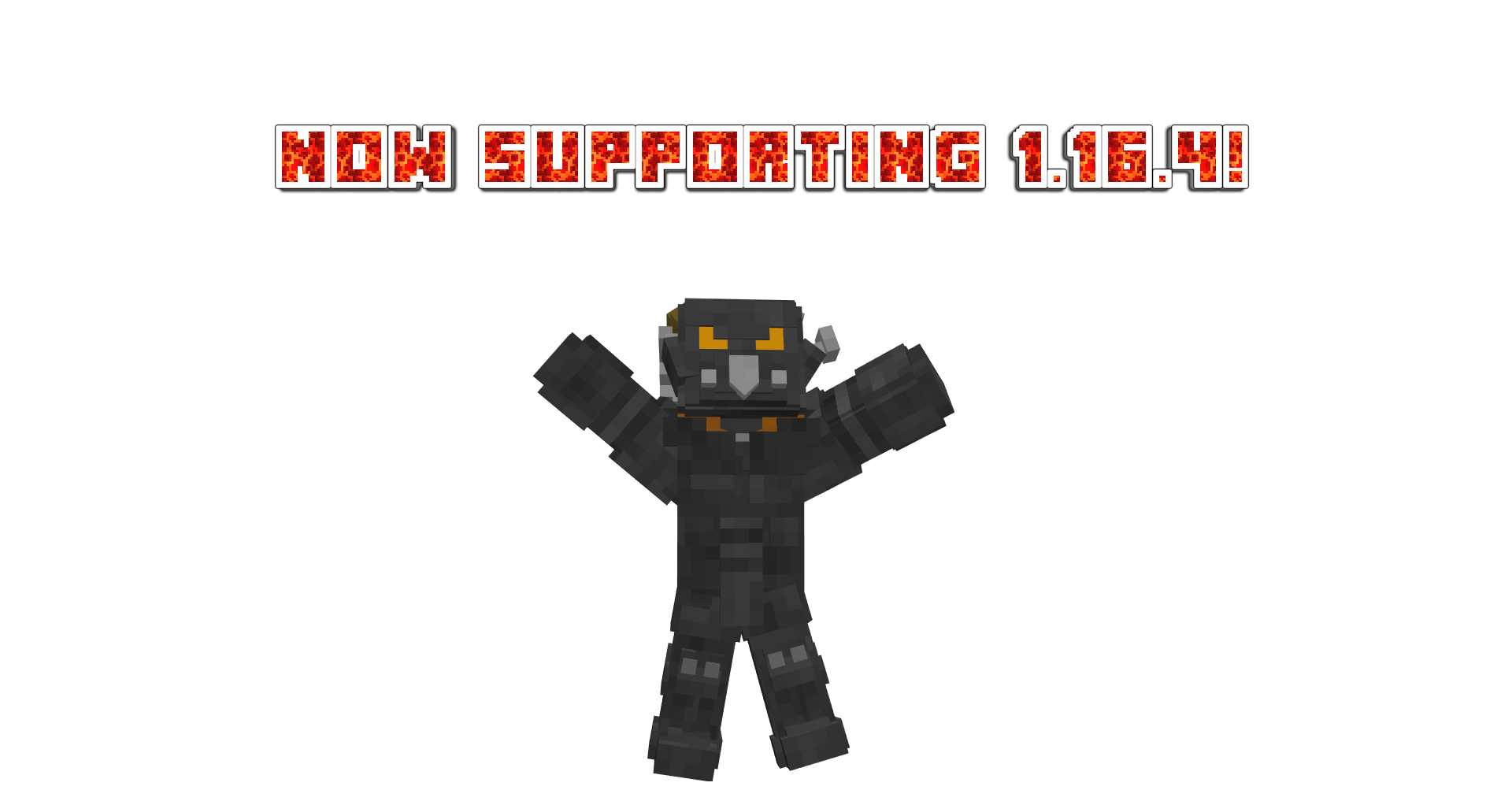 Minecraft 1.16.4 is now supported! there are no differences in content from version 1.15 to 1.16 just the version update this mod can be downloaded on curseforge, its not on mcreator because it is too large so thats my reason for it being on there.

Have you ever though minecraft needed a little extra armor? because diamond armor just isnt very good at protecting against gamma radiation, and lets be honest you have always wanted to strike fear in your enemies with a set of power armor. The armors are modeled after the fallout 3 and new vegas versions because I like the less bulky look

I am a fan of the fallout franchise and I wanted to bring that to minecraft so here are 4 of the popular sets of armor T45, T51, X01,and X02.

The T45 set provides decent protection as it is one of the older sets, Its ability is servo assistance this gives the player increased strength at the cost of hunger.

The T51 set is a well made piece of military hardware and is better that T45 in protection and bulkiness, Its ability is night vision at no cost.

The X01 what i would call my favorite, Its an advanced set of armor that provides much more protection than the T51 and its ability is regeneration at no cost

The X02 a set of armor that would make any raider run in fear, It is the most advanced piece of armor and provides great protection, Its ability is Turtle Shell this ability makes the wearer temporarily invincible to all forms of damage for a short period of time at a heavy cost to hunger.

The X03 a set made by the Enclave after the bombs fell, it was made in an effort to aid in the war against the brotherhood during operation anchorage, it is one of the most advanced sets of power armor to ever be made. It provides the most protection out of all of the sets, its ability is fire walker, on use burning gas will be released from the armor burning all nearby creatures, the cost is a hit to hunger so use it wisely.

UPDATES: my computer fan broke and my computer wont turn on so I may try to extract the workspace from the hard drive, but this has happened before so I think it will be okay and turn on once I let the battery die.

HOW TO FIND THE ARMOR: So you wanna know how to get this stuff, well you can just walk around and find a rusty ol abandoned set in the ground, once you find and unearth the armor you can use 2 steel or composite to turn the armor into a functional piece, the armor can sawn anywhere in the overworld on the surface the armor blends in so i suggest searching the desert or plains biome to see better. Also the armor rarity it T45 uncommon T51 rare X01 a little more rare and X02 very rare.

[IMPORTANT] Some features all sets have are lights that can be toggled on and off with L and K, all of the helmets provide water breathing, and a full set of any armor reduces the damage of fire at the cost of increased damage to the armor To toggle the armors abilities press M and N.

In this update there are many new things but one important thing that I should mention is there is a new dungeon, this dungeon is a bunker that will randomly spawn in the plains forests and desert, in the bunker can be found the ripper armored raiders and at the end there is a vault that requires a keycard to be opened this keycard can be found in the main room table, once you have it right click with it in your hand on the door control panel and the vault will open, and within lies a well preserved piece of military hardware.

if you would like more pictures and a better description here is the curseforge link  https://www.curseforge.com/minecraft/mc-mods/fallout-inspired-power-amor 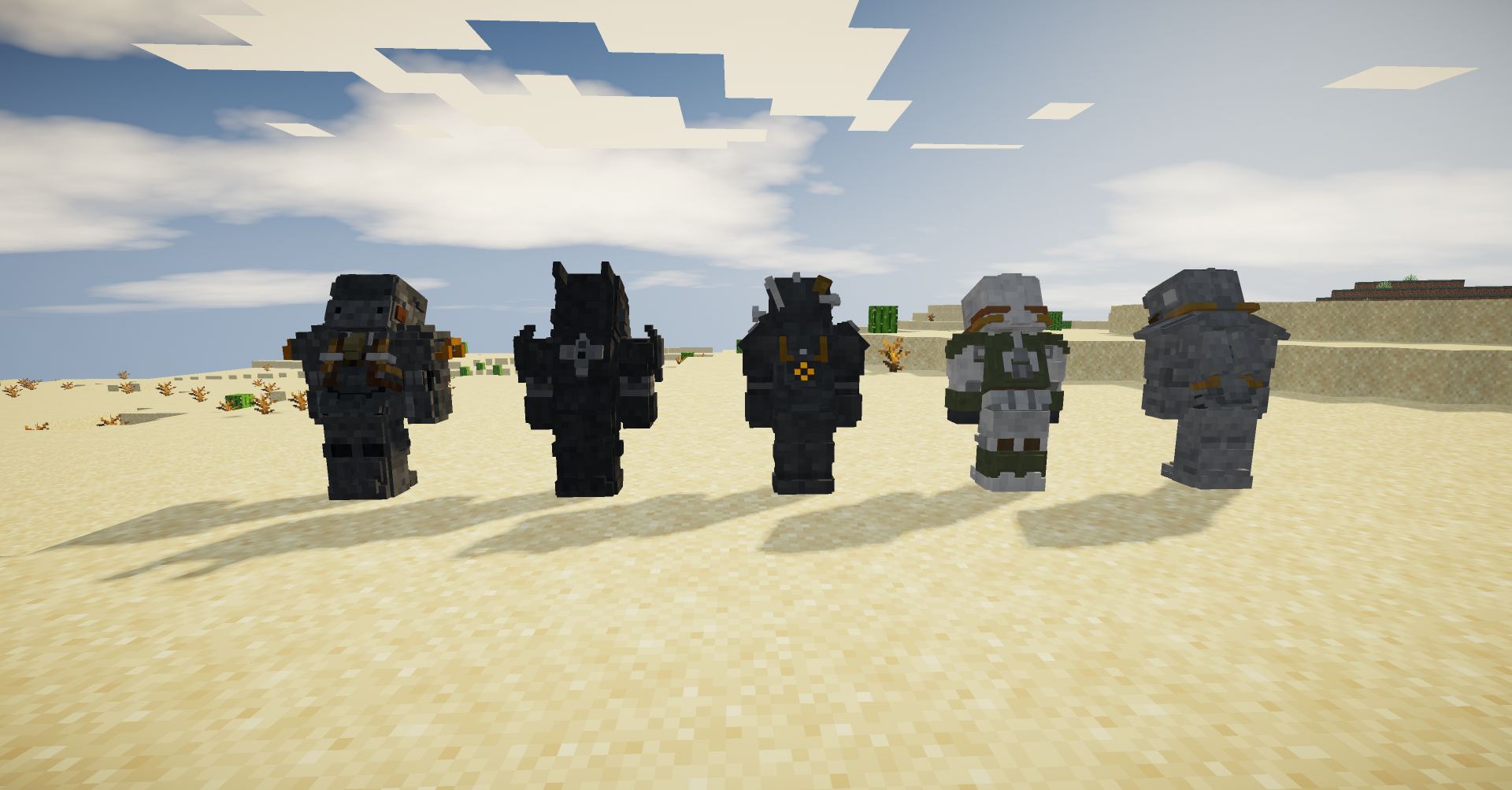 These are the placeable sets of power armor that are found in the dungeon they can be right clicked and they will be equipped with some sounds to make it feel a bit more cinematic. 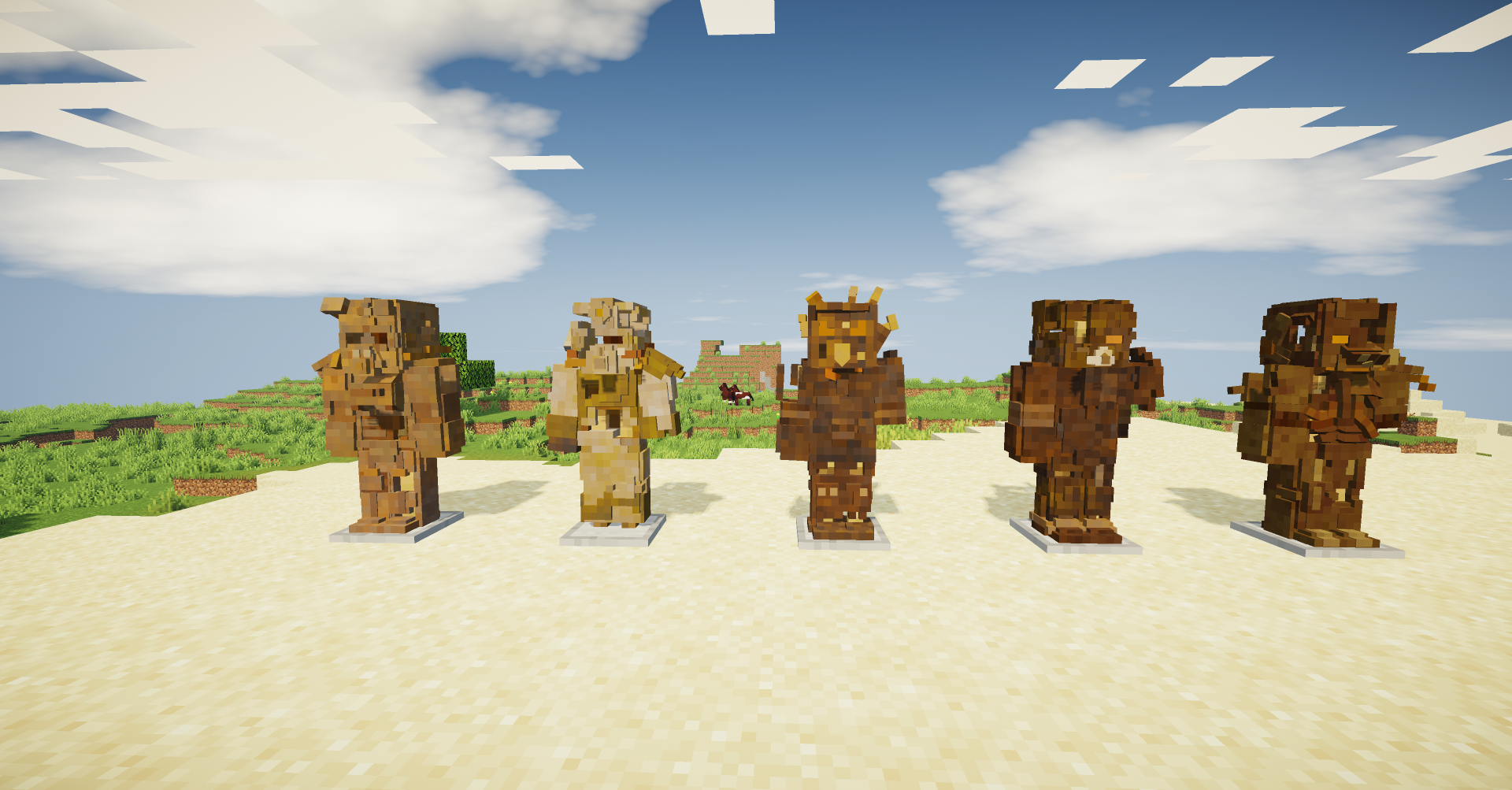 These are the new warped sets, these are old sets worn by raiders and if you happen to get your hands on a piece it can be turned into a functional piece of power armor  by putting it and a piece of the corresponding material like t45 and t51 use steel and the x0 sets use composite, so add more material until it can be made into a functional piece. They provide much less protection than their functional counterparts so repairing them must be a priority.

The new Ripper weapon which can be found in the new dungeon. It is as powerful as an iron sword but is much faster. 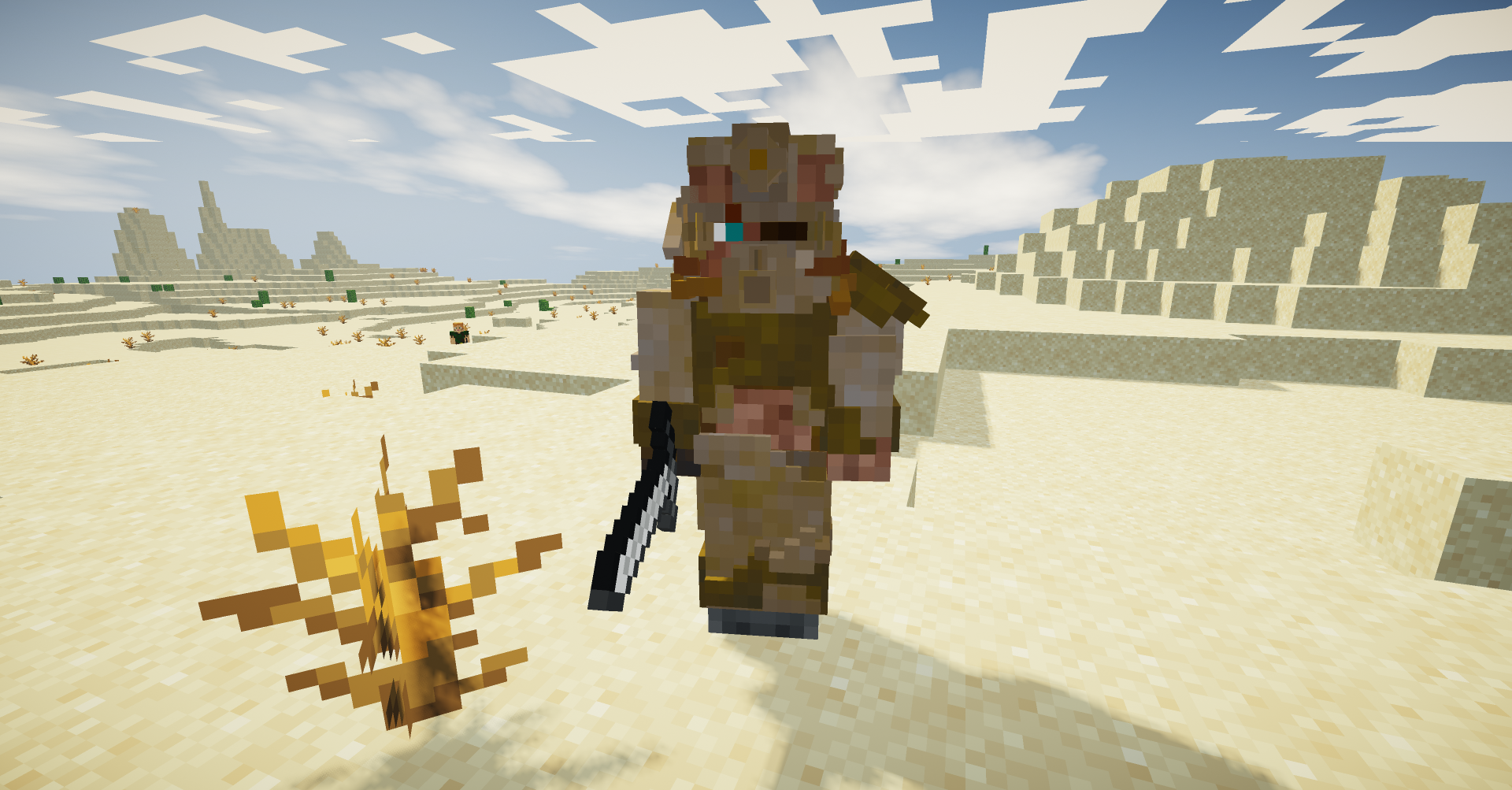 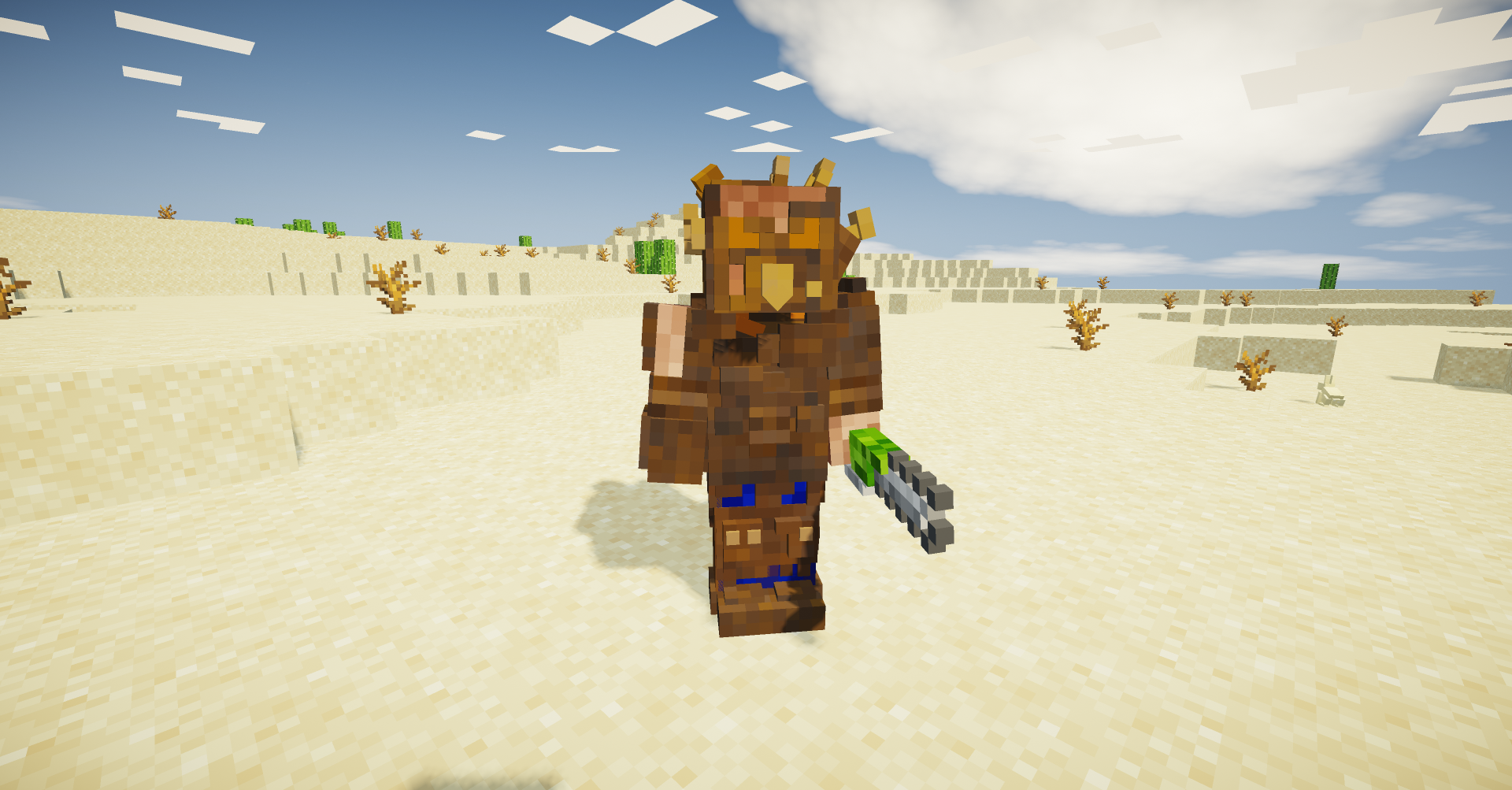 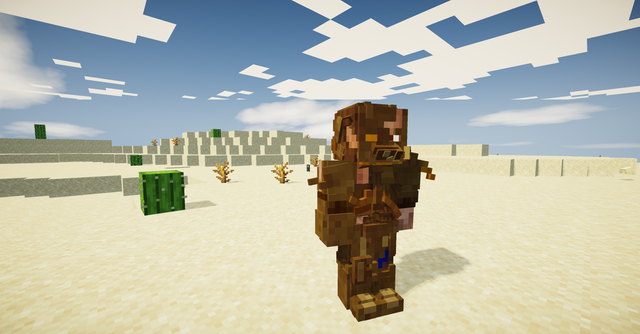 These are the new power armor raiders, they can be found all across the world so be wary. 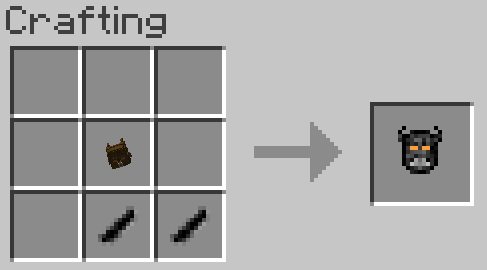 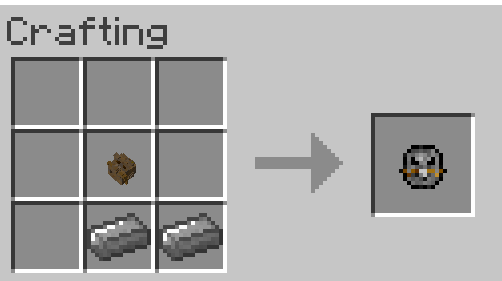 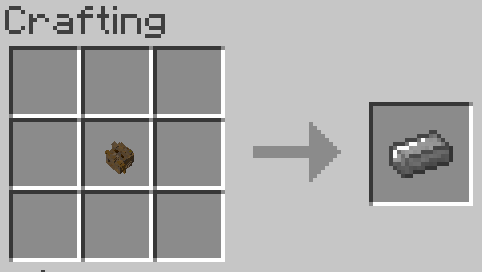 Find and extra piece or armor? all rusted armor pieces can be turned into the material they are made of. 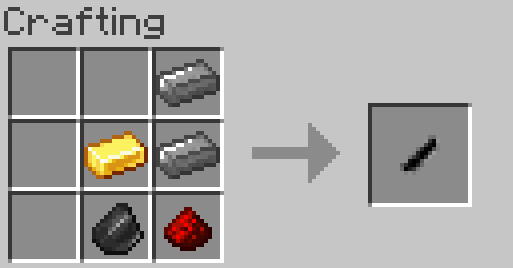 This is how you make composite 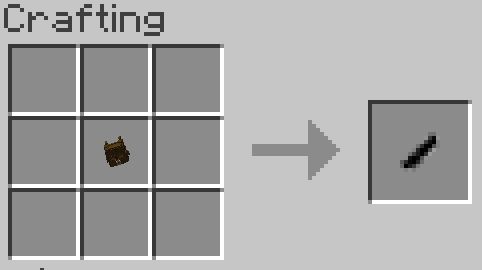 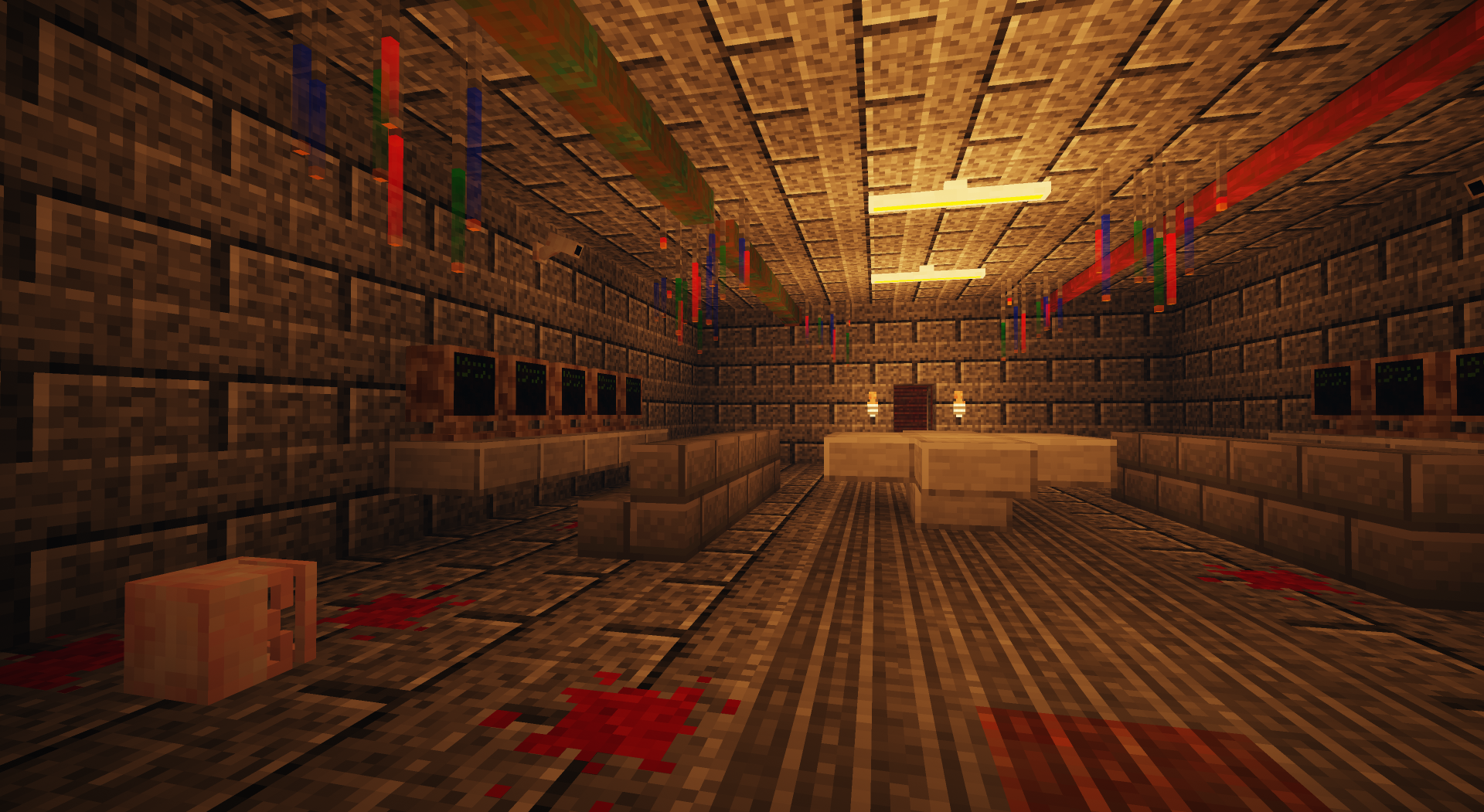 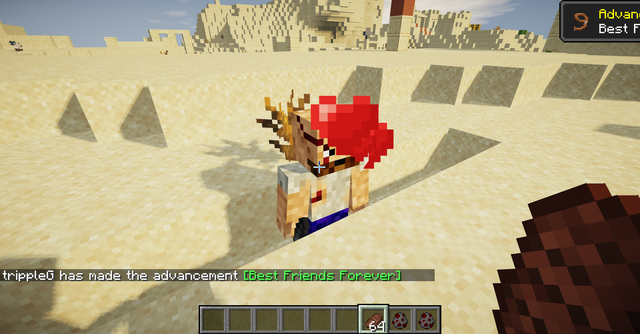 This is one of the 2 new companions that can be tamed with any kind of meat, raw or cooked they dont mind. These survivors will follow you around and aid you in battle, they can be found anywhere but are rare. 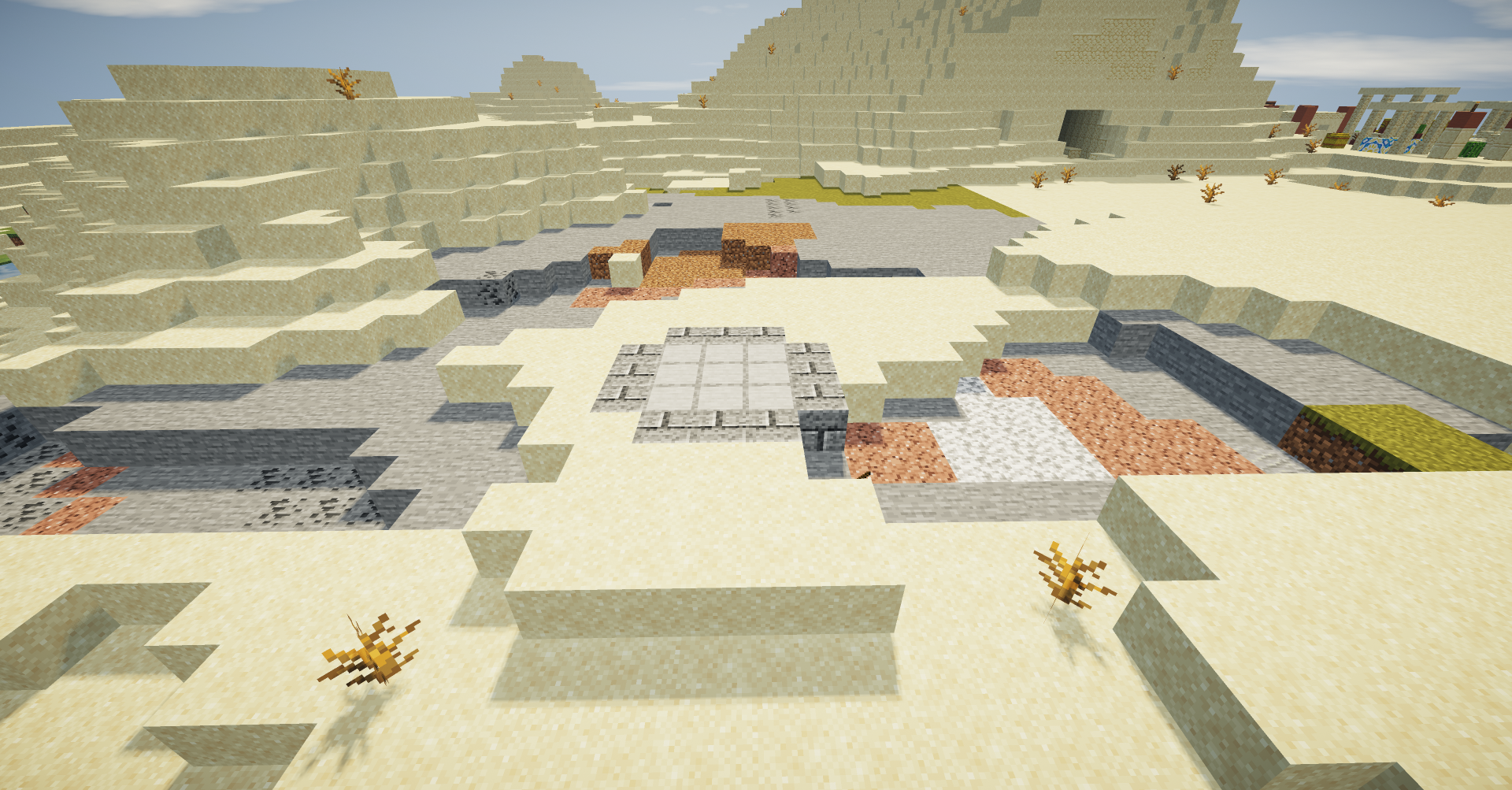 This is the bunker entrance, when searching for a bunker look out for this  or a vent. Whats is the bunker? well the bunker is an old military base used for power armor research, everyone who was in it had been taken out by and invading raider force searching for power armor to aid their actions. The only issue is that they dont know how to enter the vault that seals the power armor. 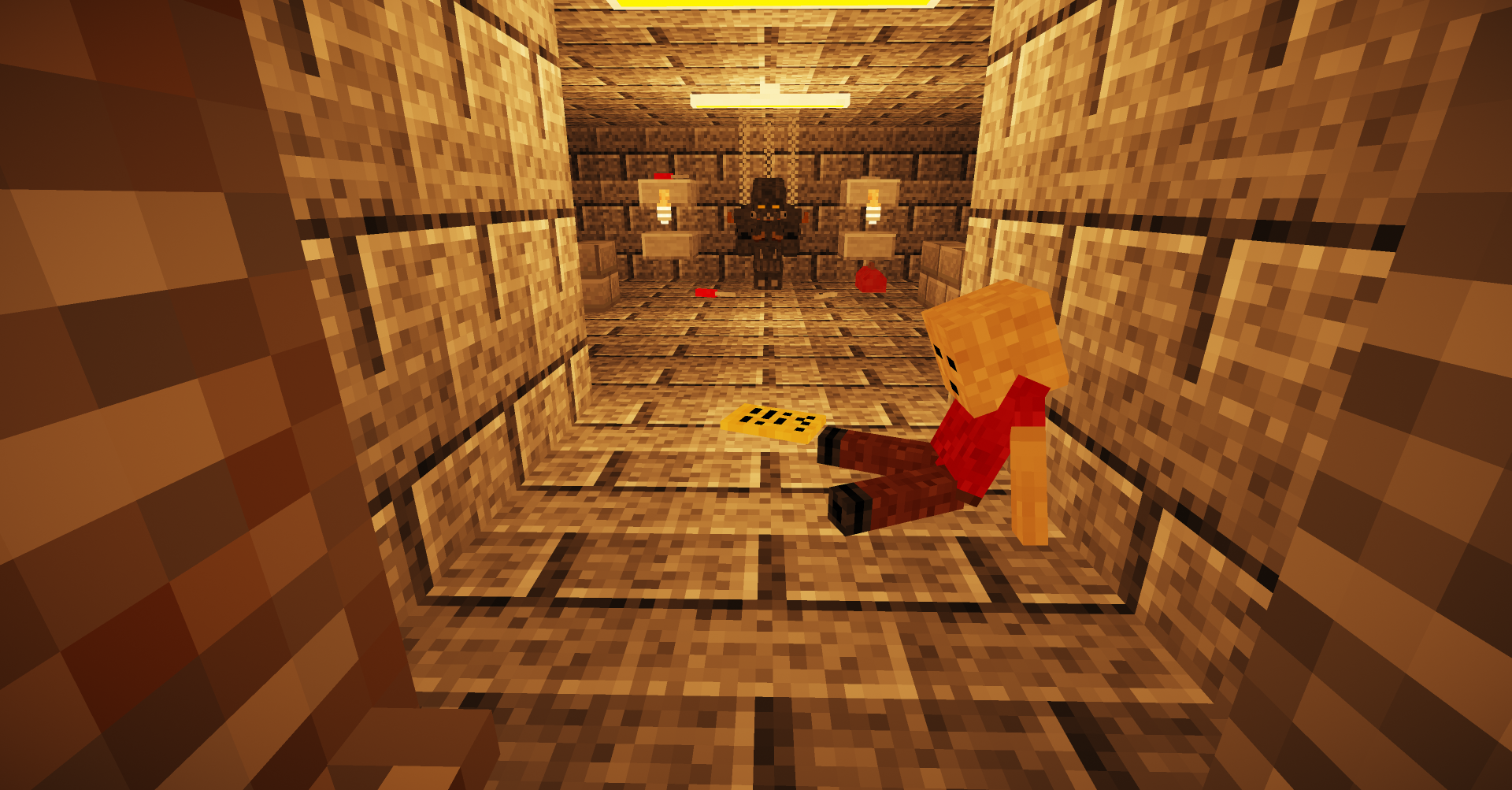 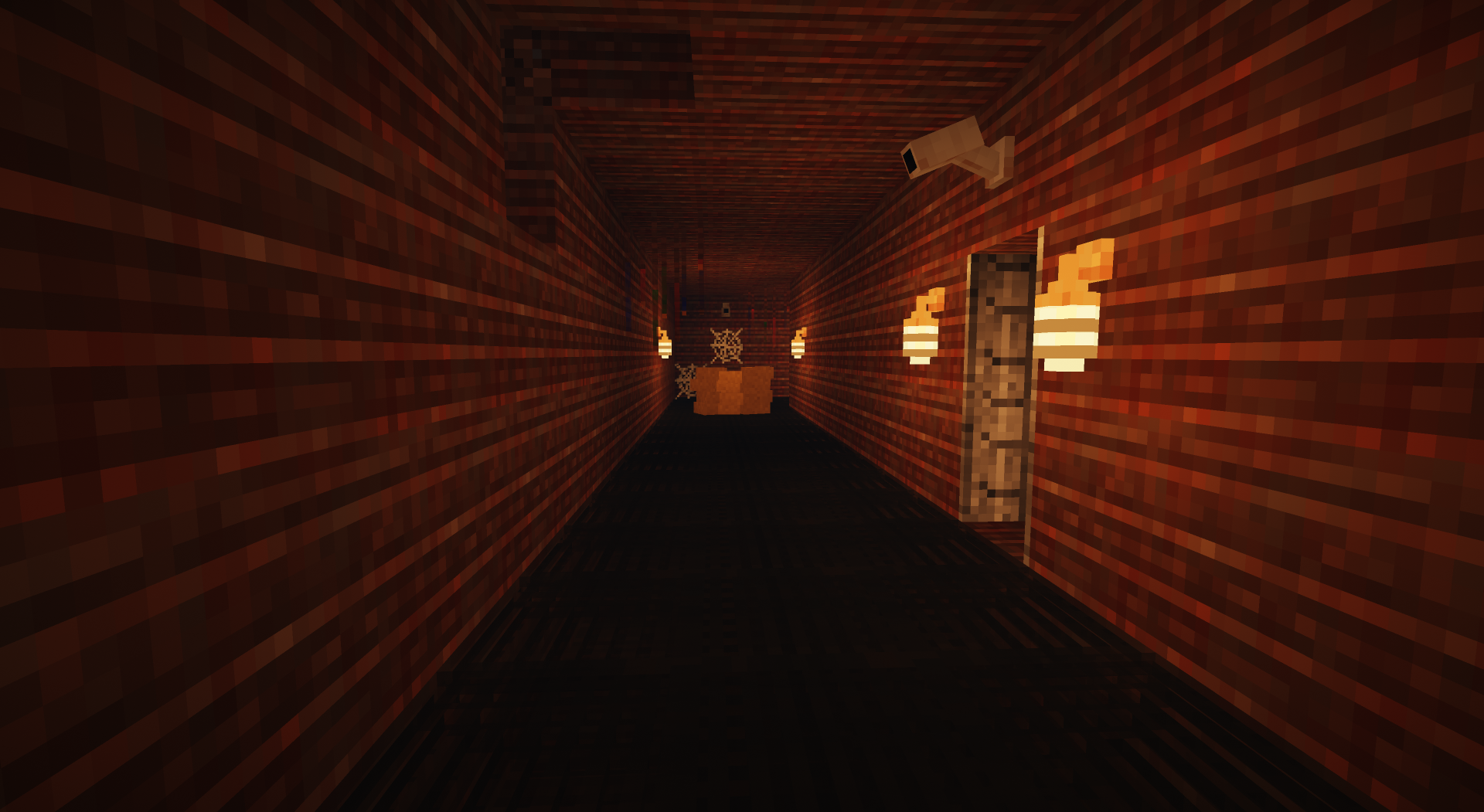 and if you want more progress updates feel free to join the discord https://discord.gg/Fscf4nGswR

Here is the T45 overlay all of the power armors have their own unique visor, I would put them in the description but they dont work so here in the imgur link.

VERY IMPORTANT THIS IS THE DOWNLOAD LINK TO CURSE FORGE https://www.curseforge.com/minecraft/mc-mods/fallout-inspired-power-amor

Thank you very much!

how can I find the armors in the world?

You can find the armors by exploring, they have a chance to spawn anywhere in the surface of the overworld, so keep an eye out for it. Also to Matej Thank you!

This mod deserves more downloads. The textures and models are awesome!

As you have no FPS drops with these models of armor?
It is possible to contact you?
My Discord - ZHUZHALKA#5877