MCreator 2020.4 adds support for the energy system. Default Forge generator uses the FE/RF energy system for this and is compatible with any other mod using this system and following common conventions.

This page explains some basic principles of this system.

The following terms are used with the energy system:

Block with energy enabled can define initial energy level when the block is placed in the world, the maximal value of energy the block can store (block capacity), and input and output energy transfer rates. 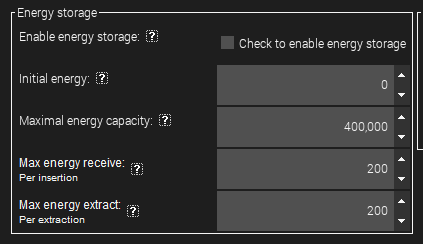 Blocks need to have a tile entity enabled to use energy storage capability. The current energy value can be shown in GUIs bound to this block too.

To make energy systems compatible between mods, a push energy concept has been adopted by most of the mods.

This means the block can only push energy to another block and not pull energy from it. While technically pulling is possible, it should not be used.

This means your block should only provide functions to push energy from it and not logic for getting energy from neighboring blocks. This prevents things like one block trying to pull energy while the other block is already pushing the energy into it.

To explain the concept further, check the image below:

If you prefer to watch the video, you can find the wiki page above summarized in a video:

See also
How to Make a Block