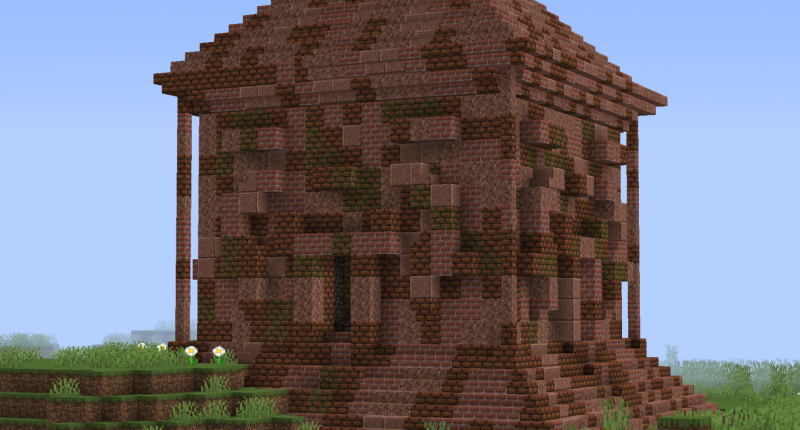 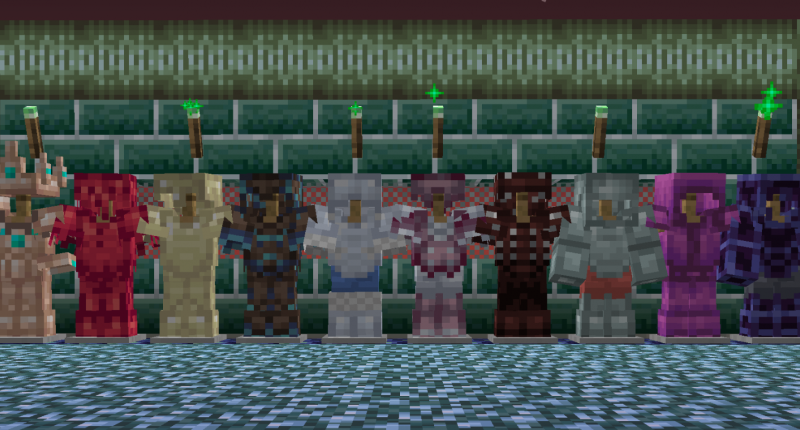 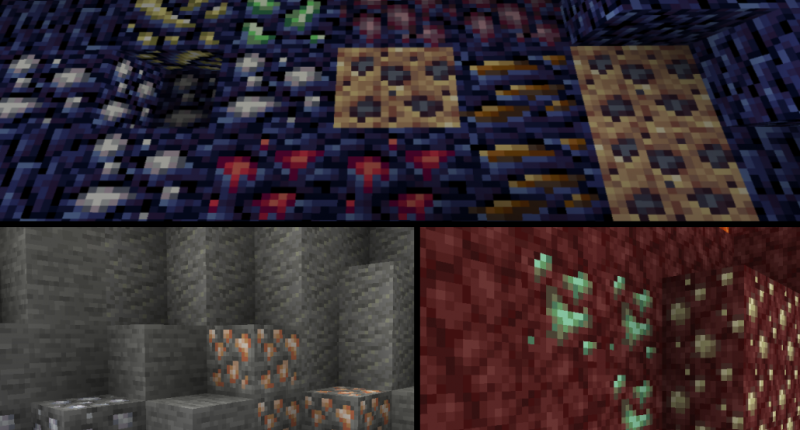 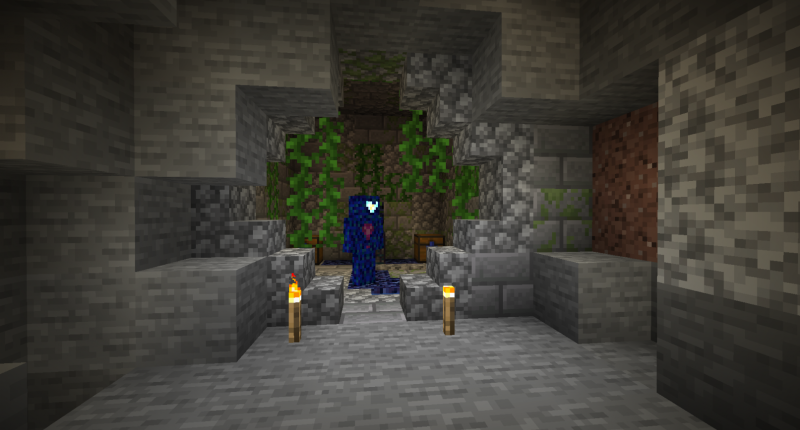 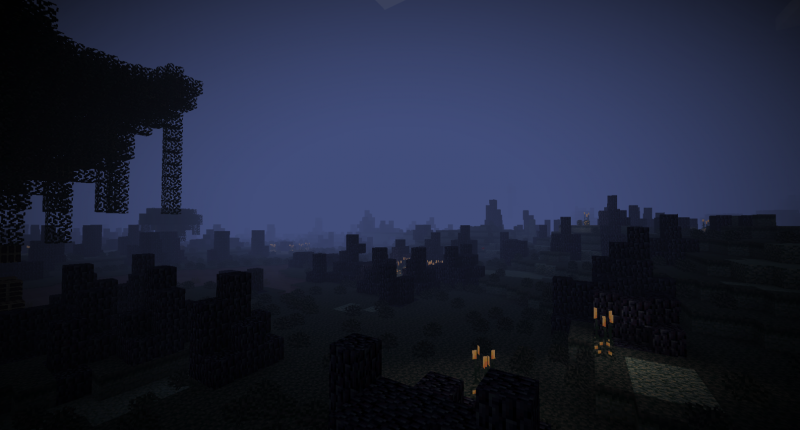 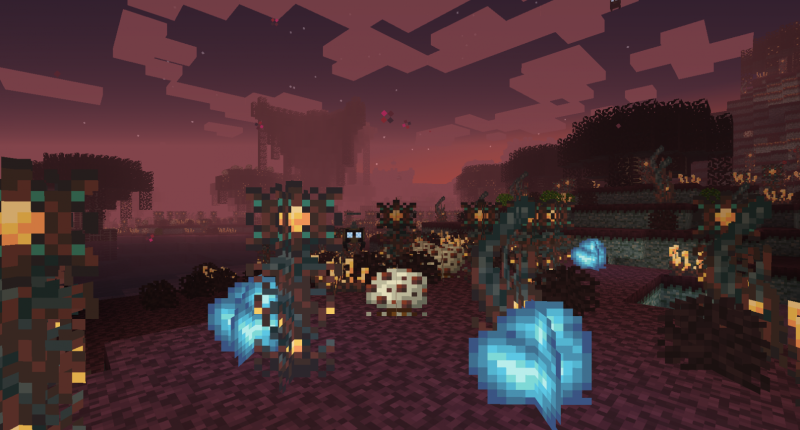 This mod adds some new materials, weapons and a dimension. AAAAND a Boss! (more in the future).

The current materials added are:

-Steel. An upgrade to iron, with better durability, damage, armor points... It's made with 7 iron ingots, 1 coal and 1 lava bucket. To make the tools you must put the iron tool and the steel ingot in the crafting table (like if was netherite with diamond).

-Silver. It came with its new ore. It gives you a bonus under moonlight  [try right-clicking or mining stone ;-)  ]. Also the armor damages Undead mobs (similar like Thorns).

-Pyrite. The other new ore. Has autosmelting and sets foes on fire (with Fire Aspect affect mobs in a little area).

-Goorium. A stone-tier like material found in Tandra. It has some sticky and bouncy properties.

-Wave. A magic material. Magic ignore defense points (it's a little buggy, I'm working on it). Magic attacks are affected by Endurance points.

-Tenebra. An upgrade to Steel. Now it can be optained by killing Ancient Sentry, but in the future it will be find in loot too.

-Cruorum: An upgrade to Silver. Provides new bonuses in the darkness.

-Soul-furic Steel: An upgrade to Pyrite. It is more durable and sets foes on fire and wither effect.

-Rose Gold: An upgrade to Gold. Can mine extremely fast and with better durability than Gold.

-Copper: Better than iron but oxidices over time...

-Tandrianite: An enhancement to Wave tools.

-Wootz Steel: A legend grew into its blade.

Furthermore, there are 5 new weapon types:

-Maces. Deal extra damage to mobs with armor points and armor, but they are slow. Now they have support with other mods. If you give an item the NBT tags MaceDamage and MaceCool with some value and tag it in forge:klsts/maces, it will work as a mace if you're playing my mod. The only cons is that you can't enchant it with Armor Crusher.

-Daggers. They deal less damage than a sword, but they hit faster and have a "Combo" effect, when you hit mobs faster (respecting the cooldown) you will gain status effects for a while. Also when dual wielding daggers you gain Haste and Speed

-Whips. When right clicking they get extra reach (7 blocks) and hit multiple entities. Currently, the Critical hit particle shows the path that the whip follows.

-Lances. Deal more damage when you are riding any entity and against riding entities too.

-Sais. They hit fast, and when dual wielding sais, they can block passively little amounts of damage.

-Greatswords. Deal hight damage and can strike further than swords, but they are two-handed.

-Knives. Have the same quirks as Daggers, but some extra bonuses.

-Greathammers. Can mine faster than a pickaxe (but without a drop) and dealt increased knockback.

There are new structures too, home of a strange creature . . . Maybe from other world?

To enter the new dimension you need to place the ThunderEgg block (found in the structures) in a Nether-portal-shape like and ignite it with a Thunder Wing.

Also working in some compabilities with other mods!

Thanks a lot for checking my mod~! I'm a newbie in the mod community, so if you find some bugs or think that something is unbalaced, please let me know it. I will love to hear opinions and feedback. Also, sorry for my English, I'm Spanish. I'm also so glad that I won the mod of the week, a thousand thanks, guys :3

[Bugfix] - Daggers and Maces could activate their special effect with projectiles.

- Added a rare drop for the Heems.

- Added a new mob, the Heem Corpse, an undead version of the Heem. They use magic attacks.

-Added 2 new toolsets and armor sets: Wave and Tenebra (an enhancement of Steel).

-Added a new potion effect: Cursed. It will lower your Magic Points.

-Added a new SkyLord drop, which it can be used to craft Boots.

-Working on lore. Click F6 to open the GUI (currently only Heem entry is available).

-Added a new fish entity in Tandra: the Spotty Fish.

-Added a new food, the Spine Berry, that restores Magic Points. It can be acquired from Spine Leaves.

-Added 2 animal entities, the Borg and the Paridea. Borgs are neutral and spawn in Tandra's surface. Parideas are passive and spawn in structures underground.

-Added more portal structures and 2 dungeon types, one more vanilla-like and other more similar to the bastions.

-Added Diraqua farmland and a new crop. The farm system will be upgrated in future versions.

-Added compability with the Ore Dictionary. Silver, pyrite and steel are compatible with other mods~!

-Updated the version of Mcreator, if you find any glitch report it please.

-Added a little Sneak Peek of the next update ;-)

-Removed the enchantments: Reaper Reach (and the Hoe reach attack, because of Whips), Shoot Down (because of the Goorium Javelin).

-Added support in the Ore Dictionary to Maces.

-Added a new crop, the Irofu (not obtainable in survival yet).

-Added new Wasp entities.They will have a lot of updates.

-Now Ancient Sentries are invulnerable to projectiles when they are at half of their max HP.

-Added Wootz Steel and Electrum, it'sjust a demo, it will be completed in the future.

-Working in compabilities with Tinkers Construct, but there are none yet in this version.

[Bugfix] - Pyrite and Soul-Furic Steel tools could mine any tier block and succesfully spawn the drop.

[Bugfix] - Tandrian Wasps "sticked to you" after a strike and dealt damage even far away from the player.

[Bugfix] - Alchemy Enchantments could be sold by Villagers.

Wowow! The textures look nice, the idea is nice... Please make updates and you have my upvote for MOTW!

If this ever gets popular, you have my upvote for motw, nice textures and ideas, keep updating :D

Yayyy, you got motw

What an amazing mod! I love the concept, and the textures.