Welcome to the Official DovahCraft Topic Board. Any and all documentation concerning DovahCraft will be held here.

(All version updates will be in the comments down below. The only thing that will change from this post is the Current Version.)

If you are not familiar to DovahCraft, this mod offers 16 new Ores to be generated in your new worlds, as well as new Mobs and items. Explore your Minecraft worlds, mine through dungeons and craft your tools with new sets including: Ruby, Cobalt, Titanium and even Emerald.

⦁    Added Smithing Table. Vanilla Minecraft Swords, Pickaxes and Axes can now be reforged to become stronger tools, up to +5 per tool. Shovels and Hoes are omitted from this, as they are neither combat oriented nor used for mining any important materials for tools.
⦁    Added Smoker. The Smoker can only smelt raw foods. Appropriate fuels are Coal, Charcoal and Block of Coal.
⦁    Added Gunpowder Ore. Will explode upon mining.
⦁    Added Lithium Ore. Contents are required for Nano Cells and can only be found in the Nazarr Dimension.
⦁    Added Nano Cells and Nano Cores, a very strong fuel capable of lasting for a whole Minecraft hour. Nano Cells are required to craft Nano Cores. Only used for vanilla Furnaces for now.
(72,000 Ticks = 60 real minutes)
⦁    Added Stripped Wood. Currently unavailable until I can find a workaround for Vanilla tool use actions.
⦁    Added Hard Magenta Glass, a block that was not present before due to an oversight.
⦁    Added recipe for Nightstone Brick.
⦁    Added Command:

Have any suggestions or comments? Sound off down below! There are a few rules, however:

Do (Things you should do, but not limited to):

Don't (Things you shouldn't do, but not limited to):

The next big update for DovahCraft will be releasing soon (looking for a Friday 19 release date, but could be pushed to Saturday 20). Most of what this update has in store consists of:

There's some more that I want to try to cram in before the scheduled date, however after this big update, I'll be working on the mod to bring out updates slowly. (Gotta make sure there's no bugs in there, right Bethesda?)

So, just to let anyone who has viewed / downloaded my mod -- This mod is NOT dead. I have been really busy as far as work goes, and I'll hopefully be able to get back into working on DovahCraft very soon. I've got some ideas in mind (like bringing 1.13 assets into 1.12.2 and so on), but if you all have an idea, please let me know!

There will be a hotfix released in the next few hours that will fix some noted issues within Update 1.5 Beta. (Official changelog will also be posted here when the hotfix is available.)

This hotfix will change the following, but not limited to:

If there are any other issues, please let me know!

Known Issues:
- Dusty Logs no longer rotate. Due to 1.8.1's structure, it will give the block a compile error.
- Tanning Racks leave the tops of blocks completely black. This will be corrected in the next update.
- Breaking the Ore blocks in Creative Mode still triggers the Advancement for the respective Ore.

For all recipes, please use an Inventory mod such as JEI or NEI.

There's still plenty more to do, so keep checking in!

Update Version 1.6 Beta should be rolling out within the next week or so. Have a lot of things being added, changed, revamped, and so on and so forth. Looking towards a February 18th - 22nd release date. 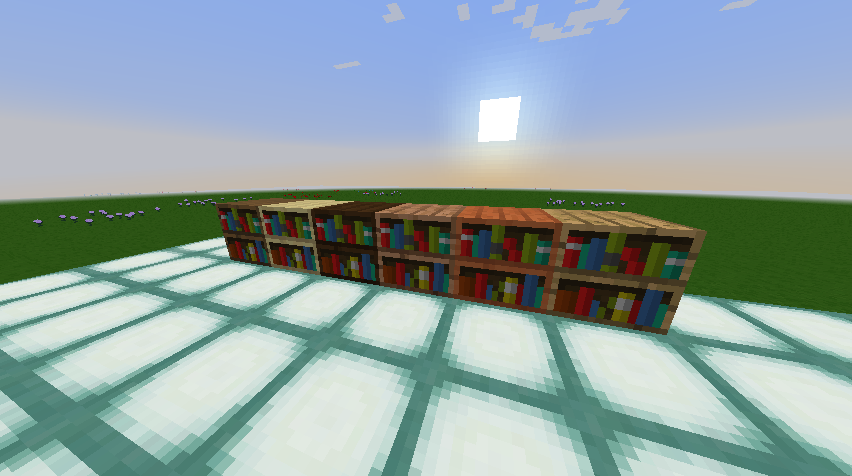 With my changelog I try to make it similar to how Minecraft's changelog flows via Gamepedia. It's easier on the eyes to read on what's been modified.

do you know you can easily edit your topic page and no post new comments each time an update comes ?

Yes, I am aware of that. These are all sequential updates, therefore each new update will have its own post. I understand editing just one post to create an astronomical block of text, however, for me and for organization purposes, the format I've chosen is one I plan on keeping. And, if the MCreator forum in the future supports web anchors (which might already be a thing, I don't know), then navigating to certain posts for a certain update would be much easier to view. Otherwise, these separate posts can be used for observation and bug tracking to see if a certain version of a mod element caused an issue, and with what object.

I appreciate the feedback!

Changes:
- Reducer now has Vanilla tool support.
- Removed Rods. All custom tools that previously needed Rods to craft can now be crafted using vanilla Sticks. All custom tools that needed Rods all have their textures changed to reflect the change.
- Updated Scaffold texture.
- Updated some material block textures.
- Updated Creative Tab titles.
- All custom material blocks can be used for beacon bases.
- Removed glint from Obsidium Ingots and Nuggets.
- Increased spawn chance of Nightmare Castles and Nightmare Pillars.
- All Pickaxes will now break if their respective abilities are used too much.
- Emerald Pickaxe's passive ability now has a 10% chance of adding 5 durability points.
- Emerald Pickaxe's Money Wise ability now uses 125 durability points. (Was 50)
- Adamantium Pickaxe's Fire Strider ability now uses 200 durability. (Was 150)
- Enderium Pickaxe's ability is different.
- Osmite Ingots no longer need Crystals for crafting.
- Pigs now drop Bacon.
- Enderium Nugget texture is now darker so it doesn't look almost like the Gold Ingot.
- Revamped Sky Dimension.
- Removed tooltips for Cobalt and Enderium items.
- Revamped Life Totem.
- Changed mod image.
- Modified all Ore generation values so that more Ore can generate in the Overworld and in the Nether.
- Nether Core structure now spawns in the Nazarr dimension. (placement is a little bugged at the moment, meaning it can spawn in trees)
- Right-Clicking the Nether Core block (given the structure requirement is met), will convert the structure to a Converted structure, with Glowing Obsidian for the frame.
- Converted Nether structure now spawns three Wither Skeleton and one Wither Golem.

Fixes:
- Fix for Materializer and Trash Can for their achievements not popping up.
- Fix for Ender Sword now breaking if its ability is used too much.
- Fixed an issue where the Blast Furnace would consume Coal 100% of the time.
- Fixed an issue where the Human mob would not have any sound.
- BUGFIX: The Materializer now stacks items.
- BUGFIX: Glowing Obsidian now has a light level of 10.

** PLANNED: Add a reforge system that would affect Vanilla-only Swords, Pickaxes and Axes, up to +5. i.e. Diamond Sword +5. **

As always, if there are any issues, please let me know so I can look in further detail! Thanks!

I think it's actually a nice idea to have an official topic where you speak of updates (unless you release updates at an insane speed).

I think the mod changelog should be synthetic (yes, my mods' changelogs aren't that synthetic XD) and the comments in the official topic should be like news that tell more about the update.

Fortunately, or unfortunately, depending on how you want to look at it, my updates usually come in random time intervals.

I usually try to stick to only releasing big content updates, meaning updates that actually contain visible changes, such as new items, blocks, mobs, gameplay changes, etc., with the exception for Update Version 1.5 (which that name prefix will be overhauled to something much more friendly).

1.7 Beta's release will probably be far away, given what project I've given myself. Trying to figure out a reforge system, in terms of balance, should be fun, and hopefully a feature that will be very nice to use.

Surprise! No, I am not dead!

I know it's been an extremely long time since I have publicly said anything in regards to DovahCraft's progression, and I apologize for that. Due to summer hours, work has taken a lot of time out of my day. In addition, my computer recently suffered from a hard drive crash, rendering my computer mostly useless. Thankfully, I was able to recover all my data in regards to MCreator and DovahCraft, as well as install a new SSD, so progress will continue. I realize at this point DovahCraft might be dead, but maybe a surprise update will bring it back. And, no, it won't just be a new Reforge System (which is fully working)... This new update will add some new Blocks, Fuels, and a new Ore that, well... Might be a bit touchy.

I plan on having the new update of DovahCraft out anywhere from tomorrow (Saturday June 22) to Monday.