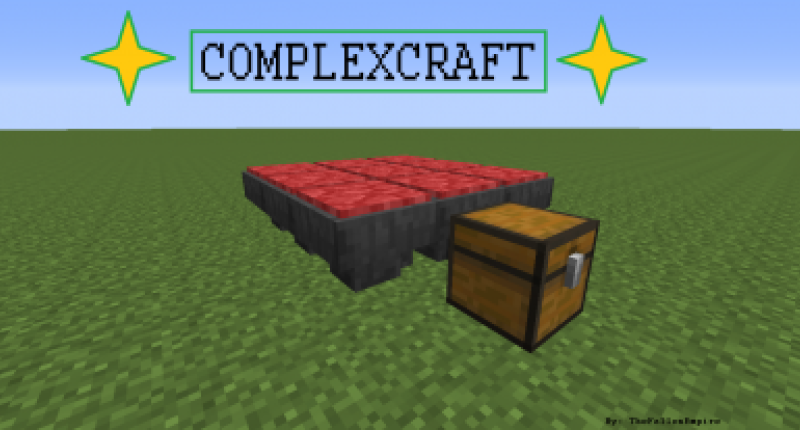 HEY EVERYONE! I'm Back with another Mod.. This time it's all about Complexity! Hope You Enjoy my second mod! :D

This Mod adds in Alota cool and Complex stuff that can also be used in Industrial Mods....

I DID NOT COPY ANY OTHER MOD! THIS WAS ALL DONE BY ME AND ALL WAS MY IDEA!

Lets Hop into the Mod:

So firstly There are Two new ore: Graphite is formed from layer 43 till Bedrock..

It can be Smelted into Graphite Ingots which can be used to Craft Graphite Tools, Sword, and Armor.

Right clicking any Graphite Tool, or Sword with a Solar Panel with Recharge it (Higher the Duribility again) !

Here are the recipes:

Exorite has no use for now other then smelting into exorite gems and then crafting it into The Exorite Multitool (Which is Buggy)...

Here is the Recipe for that:

Other then the Ore, Tools and stuff...

There are Two New Mobs. There is also Something new...

They are called Spikes. They hurt any entity (except Items) at 2 Hearts of damage. They work like pressure plate so they do give of a redstone signal. Here is the Crafting Recipe:

They can also be placed on hoppers which makes it easier for Mob Trapps, With a little hoppers and a chest you'll Be able to make an automated mob-Farm in no time!

Any Entity that touches the spikes will get hurt until it dies.. The drops then fall to the hoppers which collects them and routes them into the Chest. This my friend is a Solar Panel (A Bit Buggy, But might work fine for you): Right clicking Graphite Tools and Sword with it will recharge it (Give it Duribility) .... That is the only purpose of it for now. Maybe more Stuff later.

Now to Revolutionize Mcreator's Abilities i have Custom codded my own TANKS!

Here is an Empty tank: Right clicking it with Water (Right click in Survival Mode, Creative may crash the game!): And Ofcourse Right-Clicking an Empty Tank with Lava: Here is the Recipe of the Tank:

Here is the Recipe of the Portal Frame: I Might lower the Particles a bit latter.. :D

This is now the Actual Dimension: To make it you will need Empty Canisters... Here's the Recipe:

And the Diffrent Recipes are Here:

That's it for Canned Food..

Now you can smelt Zombie Flesh into... Well Cooked Flesh!

Also you can make a Chicken Block.... (Added just for fun)

That's it for this Mod.... New Updates will soon be here.. Thank you guys for Viewing. Please Rate and Comment more stuff to add....

Bugfixes will soon be done...

How did you make the water tanks? Just out of curiosity :) I would like to know

I'm not sure if you noticed my canned food mod which was published before this.

@#5 No Problem Keep the canned food. Plus you have much much better textures. Are they HD? Great mod idea! Keep up the good work.

I'm doing a mod showcase on it later today.
But, it's danish language :I
But you can watch it without sounds, if you want to. (when its out)

How do you make rightclick functions (for the tank) sorry for my bad english...