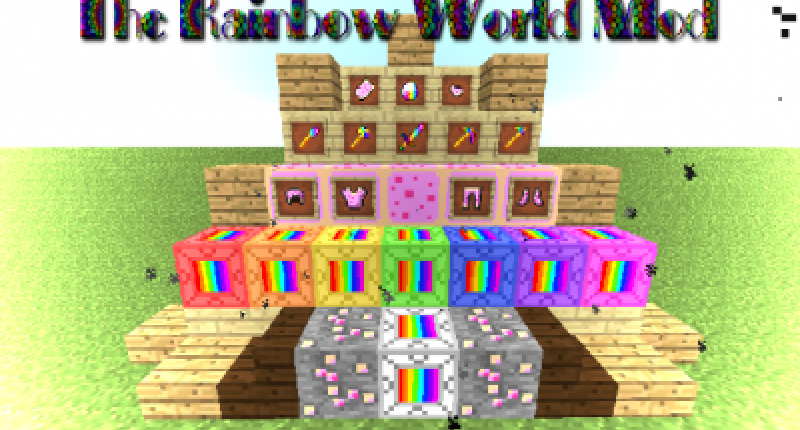 Ever felt like Minecraft needed more rainbows? If so, this mod is for you! Now I know what you're thinking... rainbows are girly! Well, with this mod, you can be one of the most powerful players that have ever existed! With the new, awesome-looking rainbow tools, you have the ability to summon lightning at will!

Overview I got the idea for this mod a while ago. I had just learned how to create mods, and, inspired by an animated rainbow sword texture I've almost always had, I decided to create this mod. Shockingly, I managed to do it in only ONE DAY! *** *** ***           Nyan Ore

Nyan ore is the base and support for the whole mod. They drop around 4 poptart crumbs, the main crafting ingredient for everything in the mod. They are rare and spawn very deep in the ground close to bedrock, so you'll have to look hard to find one of these! (Note: In an upcoming update there will be new mobs that drop the crumbs and/or whole poptarts, making them easier to obtain)

Nyan poptarts are made from 9 poptart crumbs (both of which are edible, by the way!). When eaten, they give you speed and jump boost for around 15 seconds. They are the main crafting ingredient for everything included in the mod.
You can also craft them into blocks, which is useful for storing them!

Nyan armor is crafted the same way any armor would be, using nyan poptarts. Altogether, this armor is just as strong as diamond, and, even better, they give you potion effects and they never break! The helmet gives you night vision, the chestplate resistance, the leggings haste, and the boots speed! Now I know this all sounds too OP, but the poptart crumbs are so rare, I don't think it matters.

Spectrum blocks have no use other than for decoration or to craft the rainbow gem used for the rainbow tools. When placed on the ground, they emit a few smoke particles. They can be dyed 7 colors.

"A highly concentrated amount of rainbow light and power. Handle with care."

The rainbow gem is what is used to apply extraordinary power to your normal everyday tools to turn them into rainbow tools. They are super DUPER expensive, but are worth it.

Total amount of ingredients needed to make it:

(Note: In order for you to craft the gem, the dyed spectrum blocks must be in the exact place and order shown.)

Rainbow tools are crafted simply by upgrading diamond tools (enchantments will not be transferred). Place a rainbow gem above the tool and a blaze rod below the tool to transform it into a super rainbow tool. All of these tools never break and right-clicking the ground causes you to summon lightning onto that spot!

Rainbow Hoe (Why would you even want this, anyways?!)

Crafting this gives you the achievement, "I'm such a noob, lol: Craft a rainbow hoe (Hoes are worthless, duh.)"

DOWNLOAD THE MOD! ~Minecraft Forge 1.7.10~ (Directly to MediaFire. Not an adfly link.) If you find any bugs, please report them below, and I'll do my best to fix them for the next update of the mod. *** Plans for the future of the mod: -Mobs that drop poptart crumbs/nyan poptarts -A whole rainbow dimension -Possibly a new boss -Animated rainbow armor -The RainBow (a rainbow bow) -Anything that you guys suggest enough that is possible for me to do *** If you liked the mod, please do the poll at the top of the page or comment your opinion below! I want to know what everyone thinks of this mod so that I can improve it in the future. You can also make suggestions as to what else could be added in future updates!   All textures included in this mod are made by me (well, rainbowfied by me). Do not steal them or use them in your own resource packs or other mods. If you wish to include the Rainbow World mod in your modpack, you don't need my permission. :D