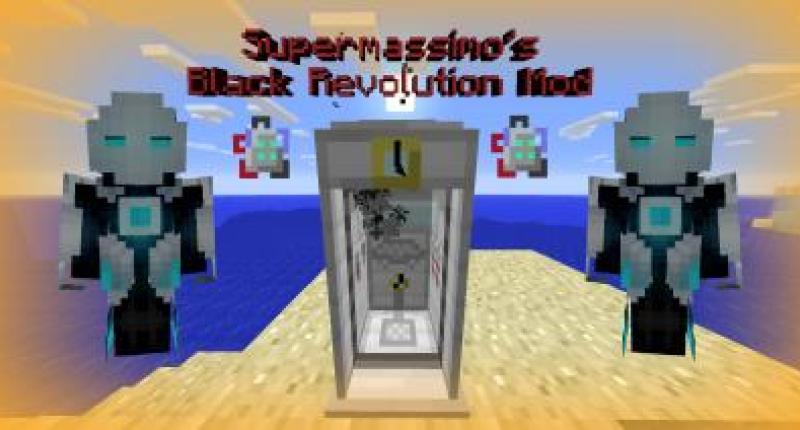 This is the Black revolution mod 1.1.0 made by supermassimo

The future of minecraftia
is in your hands, uncover the secrets of the robots and arm your time machine to travel through the eras!

This mod was made for the -Future of the planet earth contest-  and may be updated after the ending of the competition.

This is the time machine, right click it to open!

This is how the opened time machine looks like

if right clicked, the opened time machine will pop up this gui
(Warning: Because of mcreator problems this gui can't be used to teleport to the future)

as a substitute to the time machine, i had to create a portal

this is how the future looks like!
(This dimension is suposed to have structures, but again, because of mcreator problems this cant be done)

Here are some of the structures that are suposed to spawn

This is the peacefull robot, he is just a normal robot living his life

This is the hostile robot, this robot will atack the peacefull robot and any players nearby

This is the Robot defender, this defends robots from anything that atacks them, like hostile robots or eaven players if they atack the defender or the peacfull robots

-Added Story and use to the old Note
-Balanced AI
-Bugfixes!

I am making a mod showcase its really coooool mod

I will send you the link wen its ready

I cant believe i got mod of the month twice

Great Mod! I made a review of this mod and I am uploading it now! Congratz on another Mod of The Week!

Here is a review, of the mod. https://www.youtube.com/watch?v=H-CroK9mIPM&feature=youtu.be

looks cool, but my computer is crap so I can't play unfortunately. :(