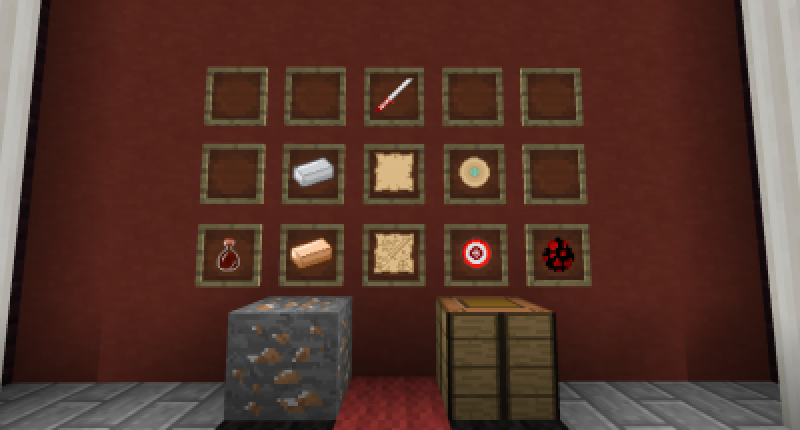 Hey guys how is everyone going?After some time without playing Minecraft I decided to start a new mod called Akame Ga Kill! This is other mod based on one of my favorite animes so I hope everyone enjoy it like my SAO mod.For now this mod only have a few addons but its still cool.

Teigu Book(Bugs/Crash)
PS:Akame its soooooooo OP for now(1 hit kill,speed and 7000 of life) but it will be balanced on the future don't worry xD To research a recipe of a weapon you need to get a essence first(for an example Murasame Essence) by killing a boss (Example:Akame drops Murasame Essence) and then click on the "Research" button(Teigu Research Table)

Its highly recommended to use Not Enough Items!

I will be updating this mod every time i can so stay tunned :D Also when i get more items/mobs/swords I will be posting here a special mod showcase map that im working on.

PS: AKAME SKIN NOT OWNED BY ME!(Going to make my own soon)

@#2 Thank you very much lunageek :) .And yeah im going to use coding for some little things that can't be done on mcreator(For an example the "pumpkin" shot)

Neat Mod, I really liked AGK. I have always wanted to make an anime mod but cant due to my terrible texture making. Best of luck to you my friend! XD

what is the show could and what channel is it on

@#5.1 Hey florian,idk why it is crashing but sadly im not going to update this mod on the next weeks because im currently working on new projects

How do you upload images?

@#6 I uploaded it on imgur then I just copied the images URL and posted it here with the "Image" button on the "Edit" mode :)

When I open GUI (MCreator 1.5.9) the gui haven't got texture - it's pink and black color