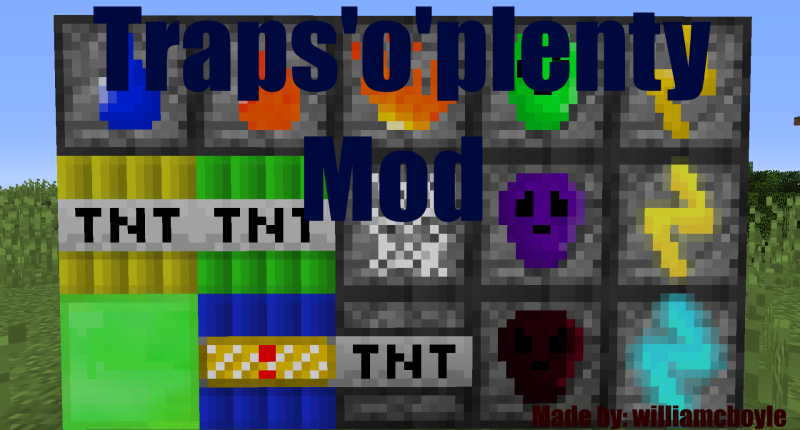 This is Trap'o'plenty, a minecraft mod that add tons of traps. There is curently about 70 mod elements in this mod. So let's get started with the diffrent traps;

The Electric trap deals constant damage when stepped on.

The poisson trap poisons you when stepped on.

The fire trap will spawn fire when it's stepped on.

There are the liquid traps, one with lava and the other one water. When stepped on, will create a water or lava source depending on wich one your're using and will empty the trap. You can

refill it by right-clicking the empty trap with a water bucket or a lava bucket.

There are the explosive ores. When destroyed, will explode.

The mines will explode when stepped on.

Quicksand will slow your movement down.

There is a new ore called Uranium, it is used to make some traps and new TNT. It's kinda rare to find some, but it glows in the dark. You cook the ore to get the ingot.

You can make Uranium blocks and Uranium apples. The uranium apples will give you tons of negative effects.

There is the rediated block. These blocks will poison you oppon stepping on it.

There is the web trap wich will spawn webs when stepped on. Also, you need to refil it with balls of web. There's a web gun wick will shoot out a web. When the web lands, it will spawn a web

That's pretty much the mod.

Hi just a quick question from a fellow Mcreator user, how do you make explosives (like tnt) in mcreator, ive been looking online and not found any help.

Go in events while your making a block. Click on :Redstone On or on block rightclicked. Find the explode event and there you go. Make sure when you make explosives that it has a resistance to 0.

I saw much mods in 7 months and 3 weeks and i can say : this is one of the best mods i every seen!

Okay, this looks like an AWESOME mod. But Above, all the pics of recipes are not showing up! I would really like to know how to craft the traps. can you please help me?

Wait patiently, it sometimes does that, they will pop up randomly. Or maybe it's just your Wifi being really slow.