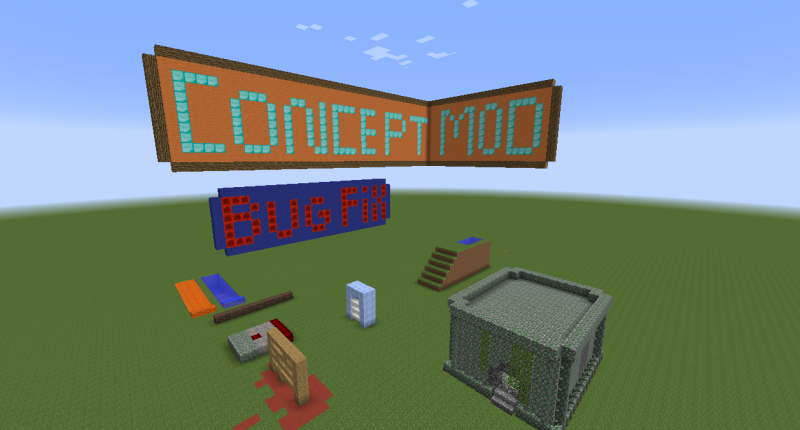 I wanted to see the capabilities of MCreator as a  modmaker. Knowing a little bit of Processing (Computer Language) I thought what if I could Make a mod that could Add in Space Manipulation(Teleportation), Clocks that can change the time instead of reading it, And Time machines. So I did the only thing logical: I created a mod to test out the Capabilities of MCreator. NOTE: the video might be a little outdated.

Oh, And I need Ideas! Concepts, Things that can blow up!:). If you have an idea that's just neat/awesome, Tell me! You know what they say: "Any idea is a good idea with the exeception of Thermonuclear Rockets or Hydrogen Bombs.". Or at least something like that. So Regular Rockets that blow up might be O.K.

Eventually Each element will Have a home for itself and others within it category. Hoverboard --> Transportation mod Portable Lantern --> Utilities mod Quantum Matter --> Adventure Mod/Sci-fi Mod

Fixed a few bugs with the Hoverboard. They Now fly Semi-well on Water and Lava. Press Spacebar to increase Height.

Decreased Hoverboard speed and Modified the Hoverboard to actually Hover. Press Left Control to speed up.

Added Hoverboard Failsafe to prevent Hoverboard from Translocating you. Seriously. A glitch in the code(Don't worry! I fixed it!) caused the Hoverboards to Accelerate Indefinitely. I traveled Hundreds of Blocks within a matter of Seconds. Minecraft was unable to Calculate Fast Enough and I couldn't find the spawn, So I executed the /kill Command.

On the other hand, It was a very fast way to find villages.

NOTE: this is simply a concept. Some things might not work.

Using My Knowledge in processing js and mcreator(Obviously), I created the Following:

Portable Shrinking Device: Can change the player's hitbox. (Sorry for the bad image. I accidentally left the hitboxes on)

Quantum Clock: Teleports the player to the highest block within a 255-block radius when X is pressed.

Lightning Staff: I think the name speaks for itself

Classic Hoverboard: You don't take fall damage when you're on it. Fire resistant. Can float. Glows in the dark.

Quantum Matter (Anomaly). Can cause strange things to happen. Because of how Buggy/Weird it has been lately, I'm not even sure what all the effects are.

Can change obsidian into lava. Can also transmute stone into iron, coal into iron and cobblestone into mossy stone.

How do you feel about Structures?

Maybe that could go in a seperate adventure mod:)

The Portable Shrinking Device will shift you for a split second when you use it. Quite buggy.

Let me know If you notice any bugs!

If you made a video, post it in the comments section!

Quantum Matter Damages Any Entity that walks inside of it Execpt the player. Weird.

You should add modular armour. So if you add (for example) a lantern to the helmet you get night vision when you where the helmet.