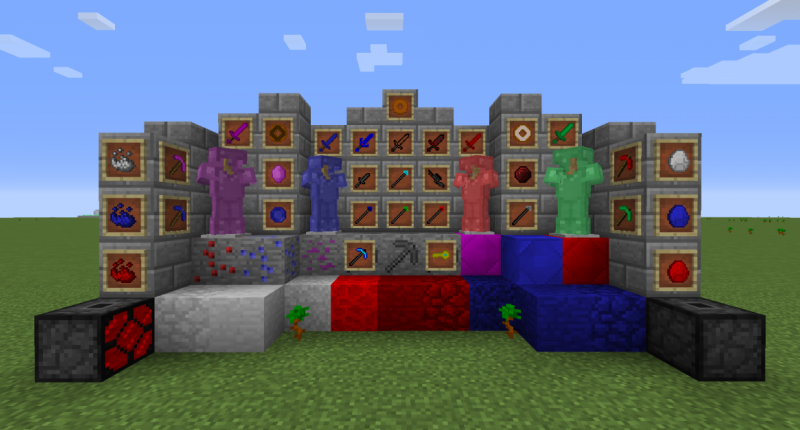 This is a mod full of random ideas that I believe make minecraft just a little bit better. I plan to slowly update this mod whenever I am given any free time.

Sapphire, ruby, and amethyst. (Each found at different levels)

Chain armor can be crafted with iron nuggets.

2 new redstone components, the stone generator and a smoke machine. (Thanks to SngLol for help with the smoke machine)

An assassin, which is only found in forest biomes, that has a new weapon called the dagger. (Right click with the dagger to get a temporary speed boost)

You may find a buried pickaxe underground which can be smelted to make a haste pickaxe. (Right click to get a haste effect temporary)

A brand new dimension called the boss dimension that has 3 new biomes in it. (Use iron blocks and a boss key to create the portal)

Fire, water, and ghost spirits/gems dropped from the new mobs.

A powerless staff used to create the 4 staffs.

A gun to snipe enemies from afar, but the ammo isn't cheap.

Donuts! Can be turned into chocolate or sugar donuts for special effects!

Sapphire, ruby, amethyst, and Obsidian armor, tools, and sword should be obvious.

Sapphire, ruby, and amethyst blocks should also be obvious.

Smoke Machine: Put gunpowder in the middle, redstone in the middles of the bottom row, and put cobble in every other spot.

The 4 staffs are crafted by surrounding a powerless staff with water, fire, ghost, or plant gems.

Gun: Put a dispenser on the left side of the middle row, then fill the rest of that row with iron ingots, then put an iron ingot on the right side of the bottom row.

Everything else is obtained by finding it in the world or from mob drops.

That is all that the mod has, at the moment. Look forward to future updates, and also feel free to recommend something for me to add and if I like it, I will probably add it. (Some ideas I might have to put off until I can learn to program well)

Nice work! I will try it out later today. Now I'm the first to ever download it :D

@#2 Ok, I can get to work on that. But I probably won't put in the recipes for the sapphire, ruby, and amethyst armor, tools, and swords because they should be obvious.

Hey, I can make crafting images for you if you want

I'm working on the crafting recipes, and they will be appearing here:
https://imgur.com/a/ibx5b
For now I only have the gems done, but the other thing are on their way ;)