I made a new mod, called Some New Features mod!

Compatibility problem with some mods!

+ This mod has a new ore, the Derium.

+ You can dig it with a Diamond Pickaxe. It will drop a Derium Gem.

+ It's the same difficult to find than Diamond. 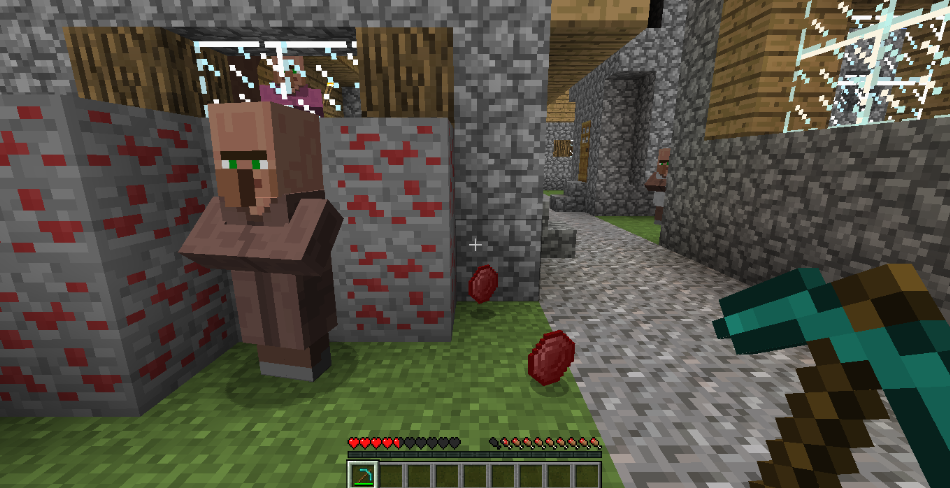 + You can make a Derium Block with 9 Derium Gems in the Crafting Table, making a squared shape.

+ You can cook the Derium Gem in a Furnace, and you will get a Derium Core.

+ You can put 4 Derium Core in a Crafting Table, making a squared shape. You will get Derium Ingots. With this, now you can craft your favourite tools! (And they are better than Diamond!)

+ You can cook again the Derium Core, and you will get a Burnt Derium Core.

+ Also, this mod have a new mob. It's my personal signature. (It's me, with my skin) You can kill it and it will drop a Derium Gem.

+ Derium Armor. Crafting is like normal armour, but with Derium Ingots.

+ Fish mob! You can kill it and it will give you one Raw Fish. And very quiet now...

+ Ore recipes! You can now craft ores and bedrock!

+ Added the Retro Dimension! The portal frame is with Derium Blocks, and you have to use the Derium Flint'n'Steel to activate it. It is WIP, so don't go there and place your definitive house yet...

+ FIXED: Retro Dimension is finally without that creepy darkness!

+ Add new structures, with treasure inside

* Compatibility problem with other mods.

If you find some bugs, please, report them to me.

> Go to .minecraft\mods, and put the mod file here.

If you know how to install mods on MacOS, please tell me!

> Just go to your server folder, and put the mod in "mods" folder

The "Not downloadable" versions are not available because you can't find them at the download section.

+ Changed some stuff of the Retro Biome

+ Solved the quite loud noise for fish

+ Derium Block has now a Lapis Lazuli Block texture, but in red.

- Derium Blocks no longer spawn particles around them.

+ Confirmated: Derium is easier to find, but you have to dig it with a diamond pickaxe

- Removed Dimension. Still working on it.

+ Added New Dimension. Still working on it, it isn't complete

This mod is a WIP mod. Don't add it to a Mod pack! It isn't complete and it can cause bugs and/or crashings.

This mod was make with MCreator Mod Maker. This mod uses Forge Mod Loader. Thanks to Forge and Pylo.

If you find bugs, report them to me! Doing this, you can help me fix the mod errors for you and for other people.

This mod has compatibility problems with some Forge mods!

I accept suggestions. So, if you have some ideas, tell me.

Excuse me if I'm speaking some wrong English, I'm Spanish.

Ask me anything you need below. Thanks to all the feedback!

@#1.1 all portals made by MCreator generate a lot of pigmen. it will be fixed soon

@#2 Updated to 1.7.2, new dimension and craft recipes, but there are texture bugs...
The Buggy Textures Update! v0.4a Alpha

There will be a new update of 0.4 that will solve texture bugs, but I'm having some difficulties to fix them. Wait for it!

Now there are pictures! You can now look at the Ores crafting recipes...

Could you make the crafting materials for the ores a little cheaper? Because a diamond ore will give you only one diamond if you break it with a regular pick. (What about this, put the <name of material> right next to stone instead of four of <name of material> inside five smooth stone.

@#5 Hello, and thanks for your feedback!
I actually know that the ore recipes are expensive. I think I'll change them for the next major update or bugfix update. Thanks again!

Could you make the crafting materials for the ores a little cheaper? Because a diamond ore will give you only one diamond if you break it with a regular pick. (What about this, put the <name of material> right next to stone instead of four of <name of material> inside five smooth stone.