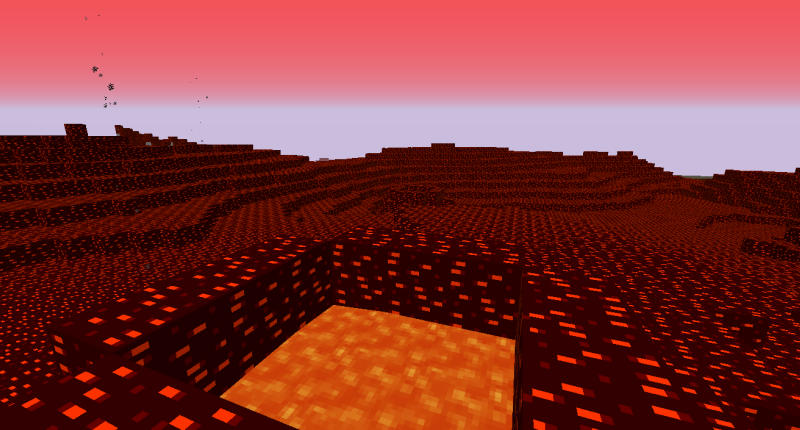 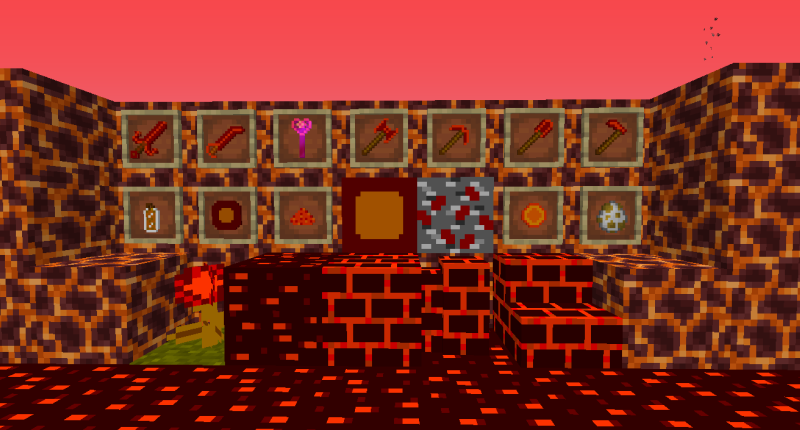 All original blocks and items 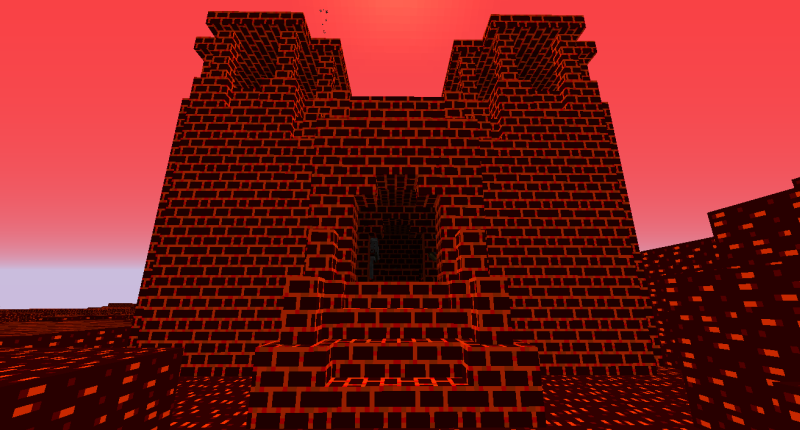 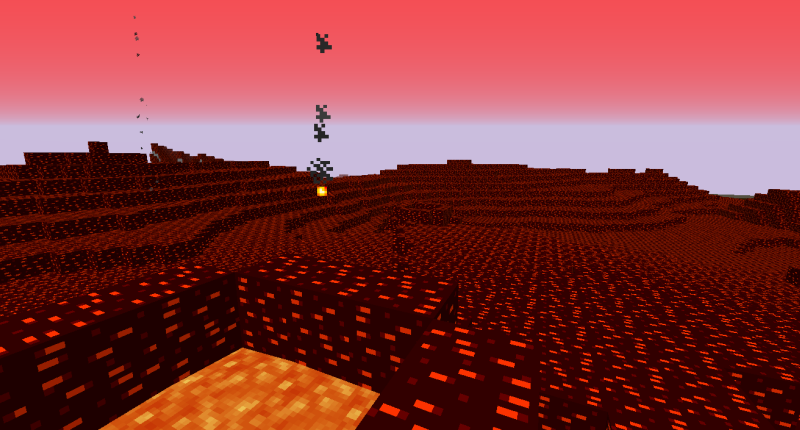 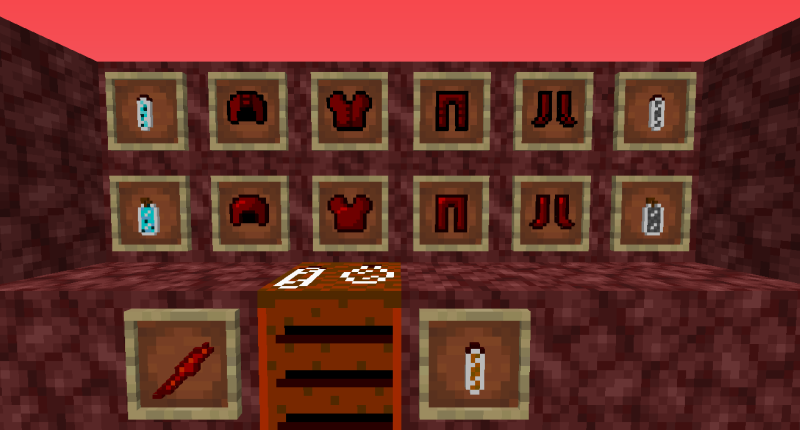 This fiery and volcanic themed mod is fairly small, with 54 mod elements. Here's a rundown:

This is one of the main features. It adds a new, reddy-orange ore that generates in the layers under Y11. If you know your Minecraft, that's the layers where air is replaced with lava at world generation. He he. Anyway, mining it gives you Hellsteel Core, which can be crafted into a bunch of tools, all stronger and more durable than diamond. The sword, axe, pickaxe, shovel, and hoe all craft in the normal way, using Hellsteel Cores instead of ingots. The scimitar deals only 5 damage but attacks faster than any other melee weapon. Craft it using the same shape as for the sword, but move the top Hellsteel Core one to the right. The staff rapidly shoots fireballs. Craft it with 4 Cores and one Blaze Powder in a T shape, with blaze powder in the top centre. Two armour sets have been added in the Alchemy Update. The first one is the standard armour, with the same armour toughness as diamond but four extra armour points and Hellsteel durability. Craft it like any vanilla armour, using Hellsteel Cores. The second has the leather texture, but red, and gives same armour toughness as diamond again but has only 2 extra armour points (on the helmet and boots). The second one is crafted using Hellsteel Shards. What are those? Items needed to craft the lighter armour. 2 Hellsteel Cores = 3 Hellsteel Shards. You get an advancement upon mining it.

The other title feature, this rare biome gives an advancement upon discovery. It's made out of Volcanic Stone, with tiny Volcanoes dotting the landscape. No passive mobs spawn here. This biome also is the most dangerous, as Magma Cubes spawn at all times, with Skeletons, Wither Skeletons, and Husks at night. The other mob that spawns here is the Ambulatory Thermal. It is completely invulnerable to all attacks, including Void damage. This is because it has no hitbox (but can still get afflicted with potions) and regains all its health every time it gets damaged. It has no drops and appears as a very tall column of smoke. You can smelt Volcanic Stone into Volcanic Brick, a building block, which can also be crafted into stairs and walls, but not slabs. The Alchemy Update changed the sky colour to red in this biome, to fit better with the theme.

This dangerous structure of Volcanic Brick only spawns in the Volcanic Plains. It's also quite rare. There is two towers, a front room connecting to them, and an altar room with two Firelilys (see below) in planters made out of Volcanic Brick Stairs. The altar room also has a Wither Skeleton Spawner, which is good for getting Wither Skulls. It also has a lucrative chest, but I won't tell you where it is. The two towers each have a Skeleton Spawner. The altar room, unsurprisingly, has an altar.

Firelily: A plant that spawns in Deserts, Badlands, and Plains commonly. It can be used to craft orange dye, and Burning Pastry (see below).

Burning Pastry: A food item crafted with four wheat and a Firelily. Restores 4 hunger, or two drumstick thingies. You get an advancement upon eating it.

Hellsteel Core Block: Made of 9 Hellsteel Cores. Can be used as beacon base, and gives off light, but not enough to prevent mob spawns.

Cocktail: A potion effect that automatically sets creatures on fire. Do not drink.

Cocktail Flask: The only way to get Cocktail in Survival. It can be thrown with the same force as potions. It doesn't create a potion effect cloud, instead auto-setting creatures on fire for 15 seconds if it hits them.

Hellsteel Core Dust: Craft out of 1 Hellsteel core. Can be used as fuel in furnaces, and is 4 times better than coal for that purpose.

The Alchemy Update added two new armours (see the Hellsteel paragraph), a decorative block for science labs and anywhere else you need a beaker and a bottle, two new throwable flasks, beakers, Hellsteel Shards, two new food items that should NEVER be consumed, and an item.

The two new flasks are single use ranged weapons. The first one, Lightning Elixir Flask, causes a bolt of lightning to strike whatever it hits from the skies. The second, Gunpowder Flask, causes an explosion only slightly less powerful than TNT. Due to their low range, be very careful not to blow yourself up. Beakers are an item crafted with 2 glass for 3 of them. Beaker + water bottle + 3 gold nuggets = Lightning Elixir, in a beaker. Beaker + water bottle + gunpowder = Cocktail Beaker. Beaker + gunpowder = Gunpowder beaker. Add gunpowder to any of those three to obtain their flask. This does mean Cocktail Flasks have had their recipe changed.

This is my first mod, and others may come. Please try it out!

- The sky in Volcanic Plains is now red.

- The stone in the Hellsteel Ore texture has been darkened.

Please tell me if there is any bugs or other problems with my mod or if you don't like something. Also please give me feedback on the textures, whether good or bad, but still productive.

If I get at least 5 downloads, or a lot of asking for an update, the Alchemy Update will come, adding new potion effects, items, GUI, and blocks!

Forget I said that. The Alchemy Update is here!

Downloader, why thank you for upvoting my mod!! The Alchemy Update will come as soom as possible! ^v^

Would also be cool to add a fire lizard mob

Sky colour change: Sure! I'll include in the next update. Thanks. As for fire lizards or other firey mobs, I'll try my best. Might take a little while to make, cos I don't have access to model editing software, so my best bet might be a pig model. Thanks for your suggestions!

Also, are you the one who downloaded? Just wondering.

Nice. The fire lizard's a cool idea but maybe I could add something a little easier to make. Like a volcanic bug or something, with the silverfish model.