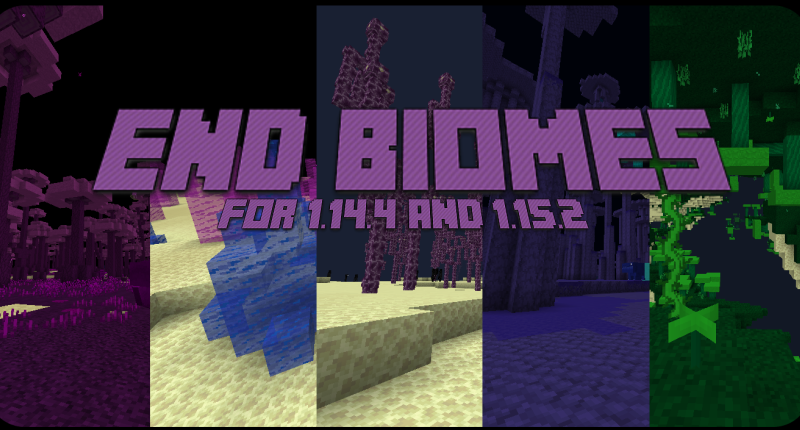 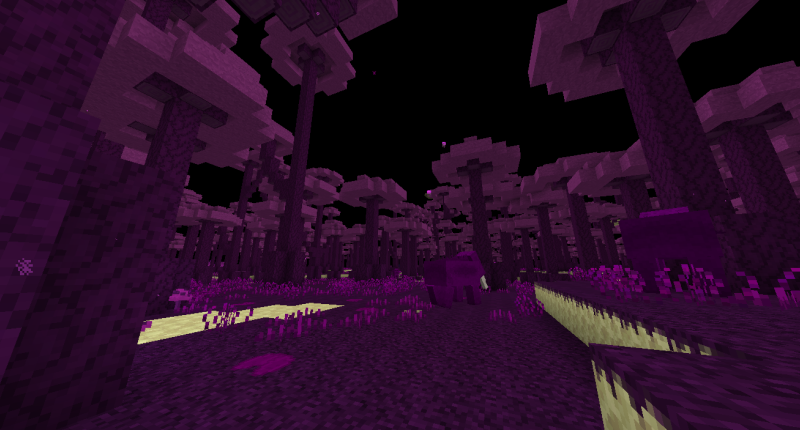 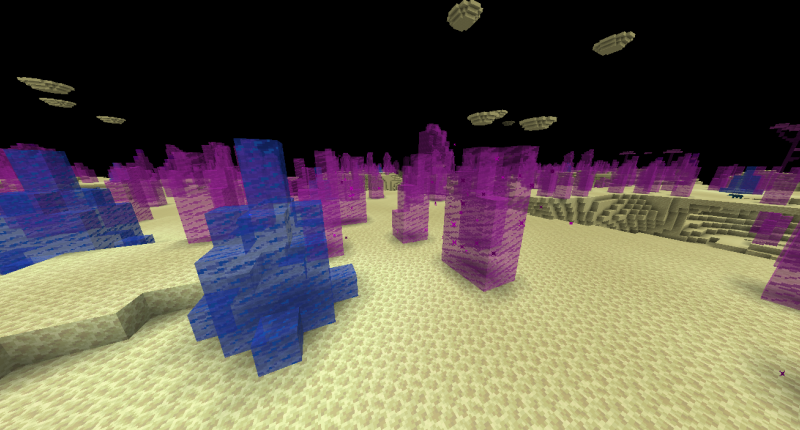 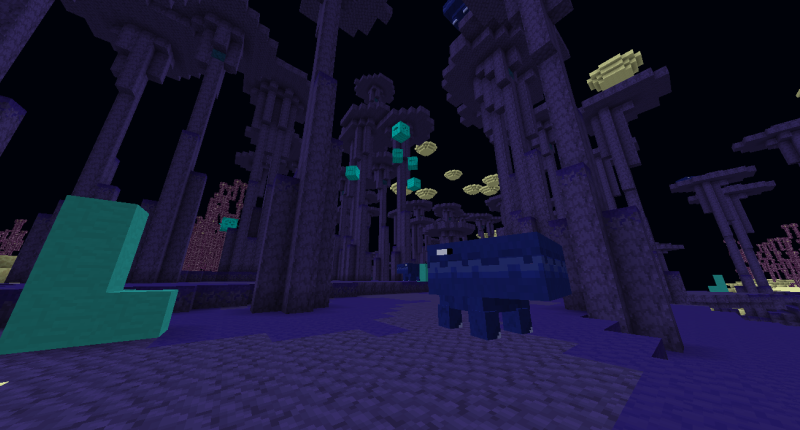 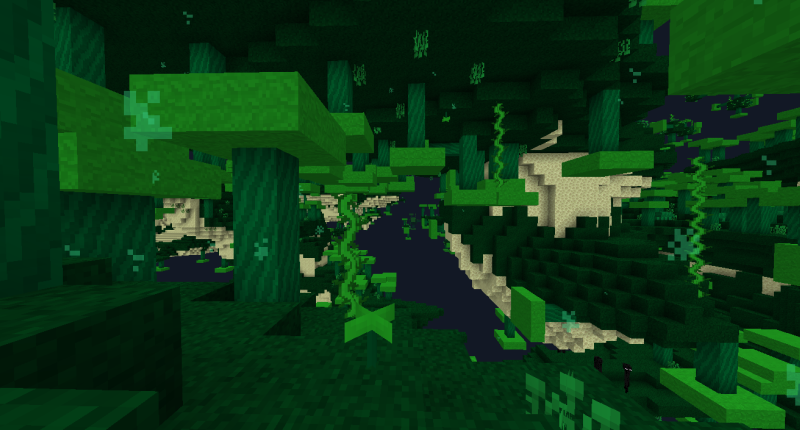 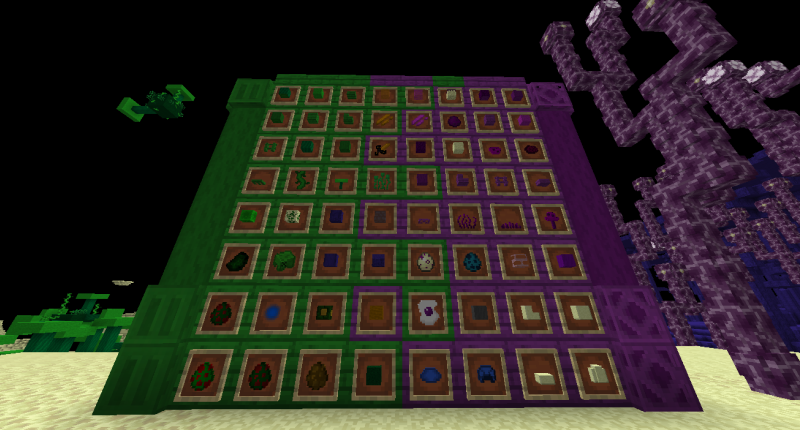 This mod adds over 63 blocks found primarily in 4 brand new biomes (+End Wastes) in the Improved End. Unfortunately it currently isn't possible to create biomes for the actual end but instead, when the Ender Dragon dies a portal made of End Stone Bricks will spawn along with the End Gateway and portal to the overworld. Going through it will bring you to a new dimension called 'Improved End' which mimics regular End Generation almost perfectly except no End Cities :(

If you're looking to mess around or start a survival here I'd reccomend just making the portal and lighting it using the currently uncraftable End Portal Igniter.

But once having gone through the portal you'll find yourself in 1 of 5 biomes listed below:

The Lavender Jungle - The End's funky new, tall biome, a new wood set, a new "Lavender Canopy" leaf-esque block that can be instamined with shears, a new Lavender Fungi, Lavender roots and Lavender Sprouts. It also has Sumarium (pretty much just a purple Nylium from the 1.16 snapshots) and some new mobs, Jelly Fish (which drop jelly for jelly blocks) and Goliaths (which I recycled almost entirely from a previous mod). These Hoglin-esque giants roam the landscape and are neutral towards you. These mobs drop lubaradinium, a unique uncookable meat that can always be eaten, allowing you to fill up your saturation bar more efficiently. Lavender Shrooms spawn in tall and short variations, with the tall ones spawning branches, using the spring lillies that dot the environment, you can move around the branches. This biome is relatively peaceful, sounds the best and makes the up backbone of the new End.

The Twisted Forest - By far the weirdest biome, here very simple, green fungi dot the landscape but it doesn't stop there, these Twisted Fungi can grow not just straight up, but also on their side and even upside down! You can also do this with the Twisted Fungi (sapling), Twisted Vines and Twisted Roots. These can all only be placed on Manubrium which makes up most of the biome. Walora, 4 legged and one eyed mobs roam the forest, these are pack neutral and drop Waloradinium, a food source, twisted mini jellies float about and look neat too. Here Twisted Islands dot the sky too. It would be unnecesarilly dangerous to go to the down facing forests but if you want to get Uranium blocks (a very intense new fuel source) you'll want to come here.

The Crystal Valley - The most in depth biome, shows very frequent spawning of Rose Quartz Crystals, the new, tortoisy Axodile and many, many Endermites. This includes a beehive-like block, the Endermite colony. These blocks house up to 5 Endermites and will occasionally produce and spit them out if there is an air block above it. If there is a Rose Quartz Crystal block below it, it will sometimes spread downwards. If you try to mine it or a block next to it, it will intiate an attack, moving all it's mites up to the next block, be it air or another colony, it will also intiate attacks in the blocks above and below it too, usually causing a horde of mites to appear at the top of Endermite columns when mined. Axodiles hunt Endermites for their eggs (which they occasionally drop and can be used to craft colonies too) and destroy colonies by trampling on them. Colonies also have a 'Jaspar Level' which causes them to occasionally spit out Jasper shards (which I have some ideas for future uses) as they grow and produce mites. By protecting Endermite Colonies, you can farm Jasper and Endermite Eggs. Endermite Eggs are useful since when fed to Axodiles, they have a 25% chance to shed an Axodile Scute. 5 Axodiles Scutes + 1 string (which they drop when fed Endermite eggs) creates an Axodile Shell which gives you levitation 2 while you hold shift with it. In this biome you also have a rare chance to find Crystal Dungeons which have Jaspar blocks on top. Endermite colonies can die at any time and can be returned to life by being right clicked with endermite eggs. These blocks can break themselves in the overworld too and have gravity. Azurite crystals spawn too and kill Endermites that step on them, use this to help farm them.

The Mangaroa Heights - Giant basidium pillars go from a Mazaedium floor to a roof. Inside the tops of these you can find Mangaroa, a crystal block that is only breakable by Chortle bullets (a new mob found here, basically an adorable flying balloon). The other mobs found here are Anklors and Baby Anklors, both neutral, Anklors drop Anklor Jaws, 4 of which in combination with 4 basidium and an orange glowing rock citrite in the middle craft a spawn stone. Spawn Stones are powered by jasper and function identically to the new Respawn Anchors. Mazaedium functions like dirt in that it drops basidium which can be crafted into polished basidium (like basalt). Feeding enough Mangaroa (like 6ish) to Baby Anklors causes them to become Tamed Anklors which are rideable (this feature is still unfinished). Chortles drop Chortle Leather when killed, 8 of which can be used to craft Chortle balloon blocks. Use 1 Anklor Jaw, 2 string and 3 Chortle Balloons to create a Chortle Airship (A flying boat woooo). Schist patches spawn lower down, dropping schist cobblestone which can be used to craft stone tools and furnaces like blackstone.

The End Wastes/End Low Lands - This is pretty much the old End, occasionaly spawns chorus forests. Patches of End Rock which can be crafted into Polished End Rock (similar to granite/andesite) can also be found.

Thanks for reading, I was quite surprised when I saw how few good End mods there were and with 1.16 around the corner and many good End mods in sight, I hope this makes a nice addition to the pile :)

I'll update the mod for the final time when MCreator updates to 1.16 (however long that takes).

those are some of the best biome ideas I have ever seen...

How did you code to grow on its side?

I created a custom cross model using block bench which allows you to keep the basic cross model but change it's direction then using procedures on update ticks, placement, neighbour changes and addition it's checks if any of the blocks around it are Manubrium (The green stuff) and changes it's direction accordingly. Definitely took a while and the downloadable version still has a bug where the item isn't visible in your hand but it's possible

Can you send a fragment for this?

How do you made the generation of the basidium pillar and the twisted shroom (spawning horizontally) ? Also 10/10 for your mod

I appreciate the kind words :)
The basidium pillars are just structure that spawn only on a specific block in a specific biome, a structure like desert temples in the overworld but just much more common. If you'd like to do it yourself you'll have to google how to use structure blocks. The Twisted Shrooms were much harder to make, the current procedure for their spawning is like 600 blocks but essentially it checks first for which direction to check in, then 4 blocks in that direction to see if it actually can grow and finally, if a larger variant is chosen, another block too. In order to make that feature common in natural generation I created a new bottom up detection that starts at y = 0 until it finds a non-air block.

Ok thanks for your answer and good job for MotW!