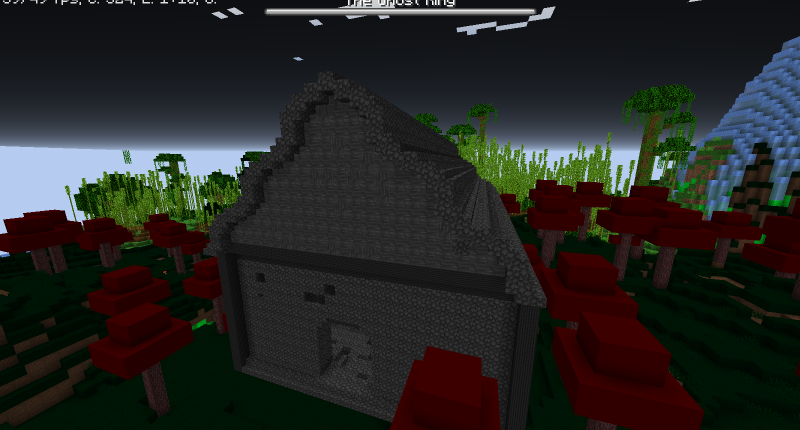 The Ghost Mansion in 1.0

Also 1.1 is out. Also as with all of my mods you can use it in any modpack.

Upcoming Features: saplings, and a new boss and more mobs and a use for hardened ancientstone (originally called darkstone) and ents (living trees). More biomes are also coming.

Tips: Before finding the ghost king you need the following to have a good chance of winning; a least some diamond armor or iron armor(preferably diamond), lots of food, torches, some weapons, and most likely a few golden apples. And if possible some potions; slow falling, strength or regeneration also if possible a boomerang. If you don't have a boomerang a bow will work but boomerangs are way better.

Mobs: - Ghosts; have the same health as a zombie and fly around. - Ghost King, a boss with around the health of a wither and shoots boomerangs, a new ranged item, at his targets also has pretty good aim with his boomerang. The ghost king is very powerful I tried to speedrun the mod and without full diamond and the ghost king does like 3 hearts even with full steel armor.

-fixed issue where it is impossible to get the portal item in survival.

- renamed darkstone to hardened ancientstone since Raolcraft has a block called darkstone :)

- steel can now be used to craft shields

- added doors for the wood types

I made the forum yesterday

I am sorry that the update is late it’s going to be a big update. 1.15, new biomes, mobs, and thats all I am finished so far. I will add the beta really soon

Also there will be the boss tower (not official name) with the teleporter. Also in 1.15 the textures might be a bit different.

I am just building the structure. It is taking forever. I hope it looks okay. It is now a huge house. it will have good loot including the overworld teleporter. 1.15 version is about to be finished. I just need to add a new block and mobs also a boss! The boss will guard the overworld teleporter and there will be a lot of mobs :D

I am doing a good job at the structure but how do I send an image to show you????

it will actually have detail

The ghost king ( the new boss for 1.15 ) will drop the overworld teleporter. I will also try to add an interesting boss fight.

I am updating the Ancient Forest to 1.15 now

I forgot to mention 1.0 has been out for a few hours

I think you could call this boss originally/original :) I can not write well in English

Thanks and also you did a pretty good job with English. The sentence made sense
:D