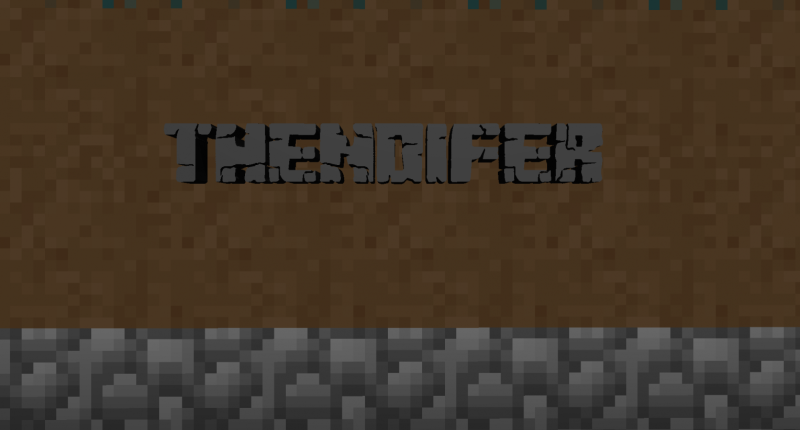 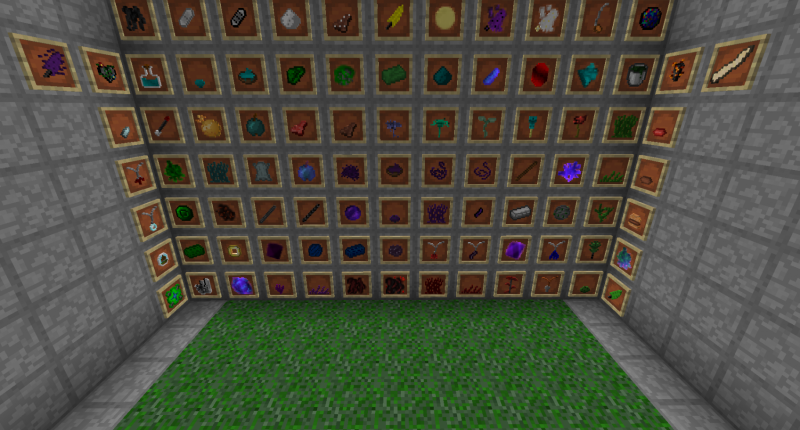 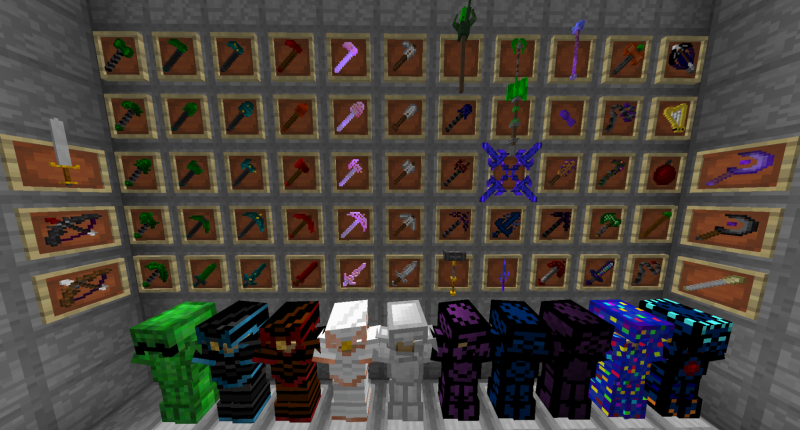 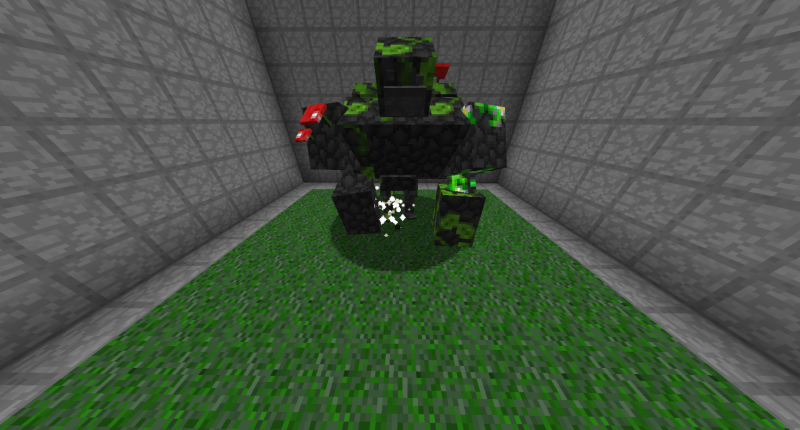 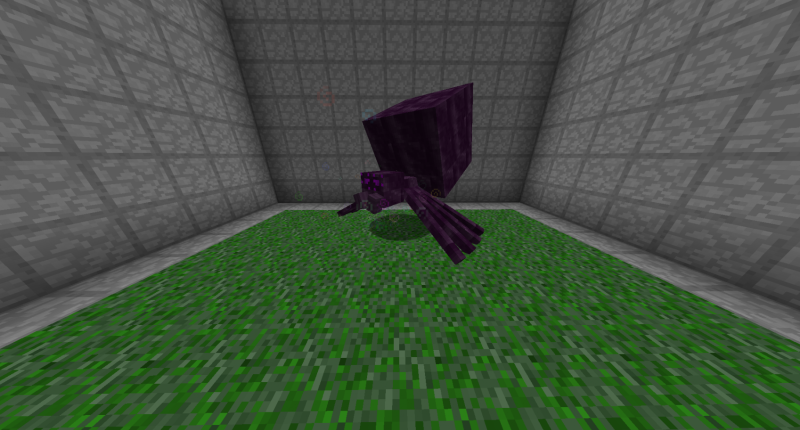 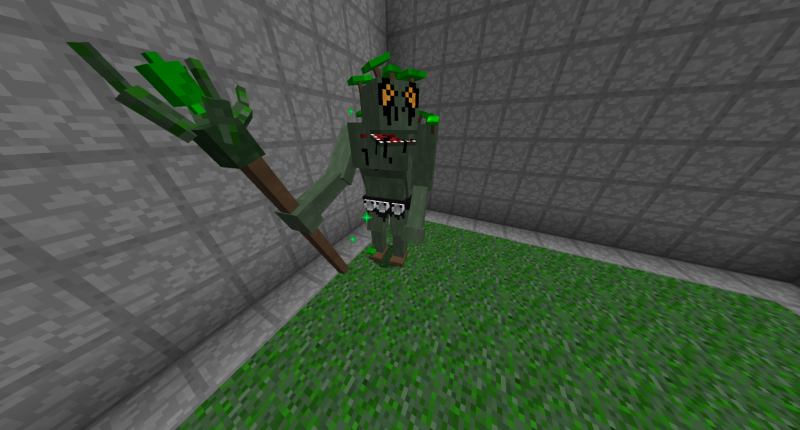 This mod "Thendifer", is an exploration, RPG mod with a fairly high difficulty level.

Goals for the future

2. Adding a brand new 5th tier featuring abyssal enemies. It will probably go along the lines of crafting and abyssal conductor, feeding it dark souls to summon and abyssal horde. With this horde will come 5 waves of enemies exclusive to the abyssal horde upon reaching the 5th wave you will fight the horde's respected abyssal reaper (the reapers will vary in size appearance and abilities). After defeating the reaper it will drop a void fragment. When combining the fragment with a dark souls it increases the chance of the fragment being successfully applied the any of the swamite and star metal weapons to increase both their damage and attack speed and possible granting them special abilities. The fragment can be combined with two fragments to create a void conduit. This conduit will increase the stats at a higher strength and succession rate then the void fragment.

4. A new mob who's name is undecided. The mob will be capable of refining Flesten for you at a higher speed and efficiency then the blast furnace can and maybe a few other features included.

To get started the player is going to want to locate a portal structure spawning anywhere on the surface in the overworld. After locating a portal structure the player will then want to continue to craft a "Thendifers Portal Igniter". After doing so ignite the portal as you would a Nether portal and enter!

Upon entering the Thendifer realm you will most likely see the Thendifer biome, containing a large variety of brightly colored flowers and other plants along with teal colored grass overlaying the "Thendifer Rock". If not this biome there are two other possible spawning locations such as the; Windroot and Twisted biomes. These biomes both have a higher difficulty scaling then the Thendifer, so watch out and take care. The player is going to want to be entering this dimension with a minimum gear recommendation of iron or higher.

After the player has a quick look about they are going to want to start mining for a variety of early game materials such as; Flesten, Thoylium, Tabril and finally Craisten.

To begin tier 1 of gear progression the player must have a diamond pickaxe and begin to mine craisten and tabril ore(s). After collecting a large sum of each material they will then craft either tabril or craisten armor, weapons and tools. After the player is geared up with the previously listed items, the player will then continue to either search for a "Stone Henge" structure contained the first boss spawn block and mine the block. Or they can hunt and kill "Baby Golems" with a chance of one dropping an item named "Birth Stone Fragment" and then use this item to craft a "Birth Stone". Breaking the birth stone will then spawn the first boss.

After defeating the Thendifer Golem numerous time the player will ha

ve built up a large sum of essence of strength. If they have not already they will then want to begin mining essence of war. After collecting these materials the player will then use a workbench to craft the essence of power. The amount of essence of power required to craft all of the essence of power gear is a total of 6. After the player has finished crafting the armor and tool, the best/recommended weapons for this tier are the "Swift Ancient Hammer", the "Enchanted Craisten Sword" and the "Repeater". It is also recommended that they have a "Darkrot Charm" because it will grant the player immunity to the poison given to them by the second boss and her minions. Once the player has all of these items if they choose to they can then proceed to kill multiple twisted spiders located within the Twisted biome in hopes of collecting a few of the boss spawn items named "Egg Sack". When spawning the spider boss it will continually spawn minions to fight along side it and drop webs on top of you. So it is recommended that you keep your distance.

After defeating the Twisted Witch numerous time the player will want to use the "Dark Matter" collected from the boss to create "Essence of Darkness" by combining both a dark soul and dark matter within an "Ancient Forge". They will then proceed to combine the essence of darkness with their armor and pickaxe of power to create the dark matter upgrade of the gear again within and ancient forge. The Twisted Witch will also drop a "Rotted Core". They will then after preparing themselves right-click with the rotted core in hand to be teleported to the Swamite dimension. After exploring this dimension they will want to combine their rotted core with any enchanted book within a crafting grid (either inventory or crafting bench). To create the "Enchanted Rotted Core". When right-clicking the ground with this item while it is in hand it will then summon the Swamite Lich.
Tier 4

After the player has defeated the Swamite Lich the player will then want to mine in the Swamite dimension for "Swamite". They can then construct the swamite into ingots using the "Swamite Hammer". After crafting the swamite tools the player will then search the Swamite dimension for fallen asteroids. After mining the star metal within these asteroids the player can then use it in combination with the swamite ingots to craft "Star Metal Ingots" they will then use these ingots in combination with all the "major" armors sets to craft the star metal armor. The star metal can then be further improved into "Astral Armor" by combining it within a flesten forge along with a large sum of the charms collected throughout progression.

Note - Ores without biome specifications will spawn in all biomes within their respected dimension...

Vanilla Ores - both iron and coal can be found in all biomes within the Thendifer dimension at their vanilla Y level coordinates.

Flesten - Flesten is the dark green ore found at the Y level coordinates of 1-17 best digging level being 10-12. After collecting this material with a pickaxe that has a harvest level of 2 or higher (iron having 2), the player can then refine the block material into Flesten using a blast furnace.

Thoylium - Thoylium is a whiteish grey colored ore found at the Y level coordinates of 1-100 though it's best found on the surface and can only be located within the Twisted biome. After collecting this material with a pickaxe that has a harvest level of 2 or higher, the player can then refine the black material into Thoylium ingots using both a furnace and blast furnace.

Tabril - Tabril is a red ore found at the Y level coordinates of 1-16 best digging level being 10-11. After collecting this material with a pickaxe that has a harvest level of 3 or higher (diamond having 3), the player will receive a tabril.

Craisten - Craisten is a light blue ore found at the Y level coordinates of 1-16 best digging level being 10-11. After collecting this material with a pickaxe that has a harvest level of 3 or higher, the player will receive a craisten dust and can craft it into a craisten shard while using a crafting bench.

Essence Of War - Is a dark red pulsating ore found at the Y level coordinates of 1-64 though its best found on the surface. After collecting this material with a pickaxe that has a harvest level of 4 or higher (the earliest harvest level 4 pickaxe obtainable is "The Collector"), the player will receive an essence of war.

Swamite - is a dark green ore found at the Y level coordinates of 1-35. After collecting this material with a pickaxe that has a harvest level of 7 or higher (The only pickaxe before swamite capable of mining swamite is the "Dark Matter Pickaxe"). the player will receive a swamite.

Thendifer Golem - The thendifer golem is the first main boss of the land and can be spawned by breaking a "Birth Stone". Its is recommended that the player has either tabril or craisten, or a combination of both of the gear sets to defeat this boss. The golem is immune to ranged attacks, fire, fall damage, and drowning.

Twisted Witch - The twisted witch is the second main boss of the land and can be spawned by right-clicking the ground with an "Egg Sack" while it is in hand. Its is recommended that the player has the armor of power gear set. It is also recommended that they have a "Darkrot Charm" because it will grant the player immunity to the poison given to them by the second boss and her minions.

Swamite Lich - The swamite lich is the final boss of the land and can be spawned by right-clicking the ground with an "Enchanted Rotted Core" in hand. It is recommended that the player has the dark matter gear set before facing down this final foe.

Frost Warg - The frost warg can be spawned by right-clicking the ground with a "Frosted Tooth" in hand. It is recommended that the player has either armor of power or dark matter armor before facing this foe.

1. Why the horse is in the thumbnail (+ no bg)
2. Seems, that author copied and pasted the same text in the description.

So change it faster than moderators remove your mod.

this looks really good! haven't tried it yet, but i will soon!