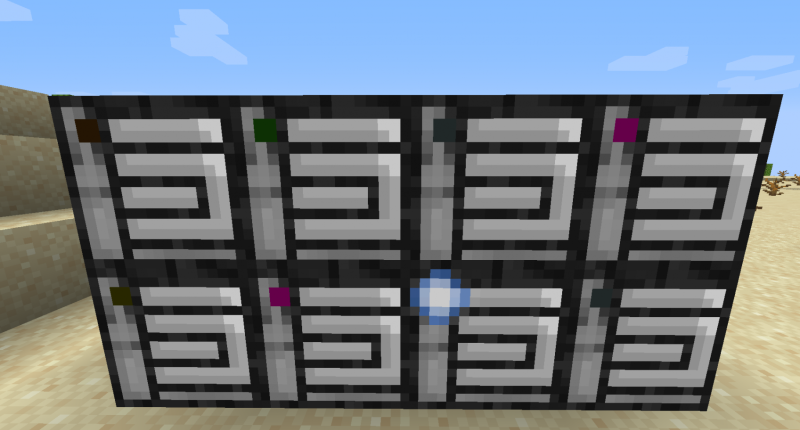 Growth Spore Mycelium: three bone blocks and a mycelium. It spreads to dirt quicker than grass; but if no dirt is nearby, it becomes normal mycelium. If there's not enough light, it goes dormant.

Aggressive Mycelium: a mycelium in the center, a nether wart block on top, redstone dust on the sides and a diamond on the bottom to make Aggressive Mycelium. It actively attacks grass and other types of mycelium. If there's not enough light, it also goes dormant.

Powdered Mycelium: a highly-explosive type of mycelium. Formed when a snow layer goes on top of the Agressive Mycelium. Explodes when broken, blown up or with redstone.

Extremophile Mycelium: it spreads exclusively on stone, netherrack and endstone. However, it can attack Curator Grass. It is crafted with a mycelium in the middle, netherrack around it and then the stone and endstone in the corners.

Curator Grass: attacks any other myceliums, though vulnerable to Extremophile Mycelium. After it completes its job, it becomes normal grass. A grass block and a potion.

Air Mycelium: can transform dirt into mycelium from above. It looks like a cloud of spores. Mycelium in the middle and gunpowder elsewhere for 16.

Mutant Mycelium: put a Growth Spore Mycelium in a blast furnace for this one. It very quickly destroys flat areas of grass or normal mycelium. Use the Curator Grass to stop it.

Nano-Mycelium: an artificial variety of Mymoss. You need a Scorched Mycelium, 2 obsidian, a nether star, 2 white stained glass panes, one light gray stained glass pane, and 2 observers to craft it. It can be configured to spread through dirt and its variants (using dirt), stone and its overworld variants (using stone, not cobblestone nor smooth stone), sand (using sand), sandstone and its variants (also using sand), wooden planks (using a stripped dark oak wood, not log), wooden logs (also using a stripped dark oak wood, not a log), or other miscellaneous things like pistons or pumpkins (using a dry sponge). Just avoid putting a dragon egg into it...

The mod also puts a 'mycelium' tag on all the mycelium-related blocks.

.1.0.1: fixed Scorched Mymoss dropping coarse dirt instead of itself

Welcome to the beautiful world of Hermits and creafting... mycelium war have taken over the world now