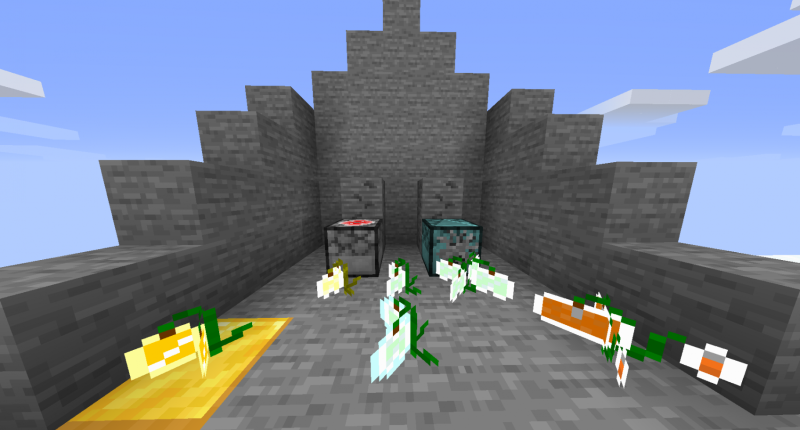 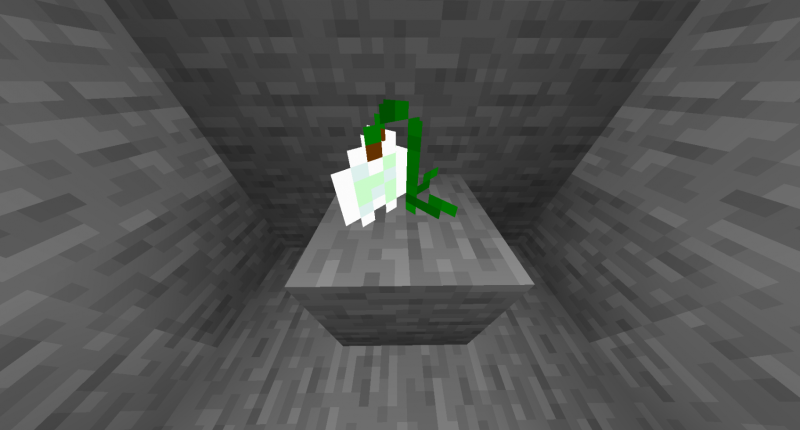 Gaspepper, the star of the mod! 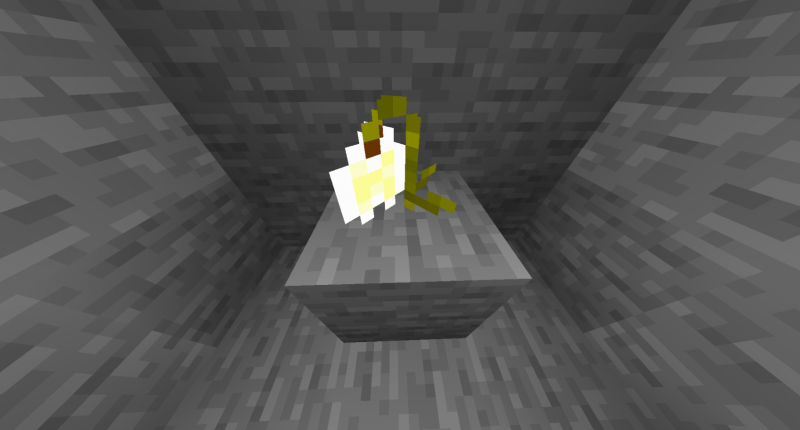 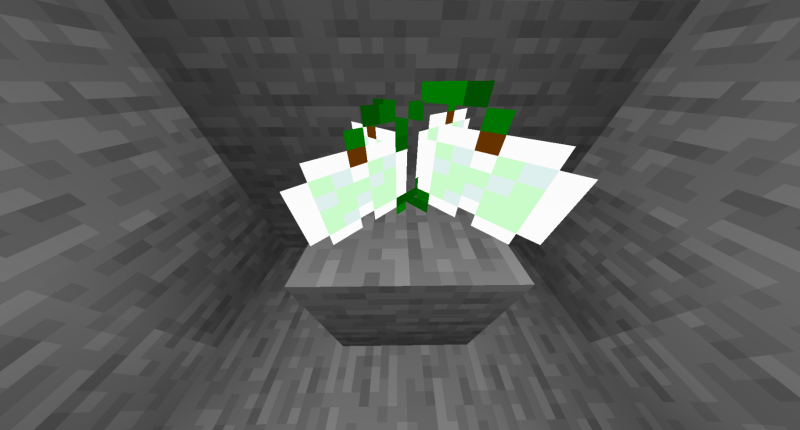 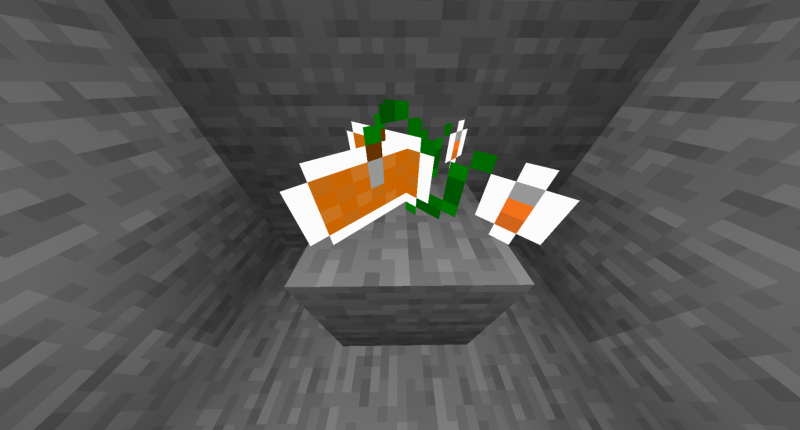 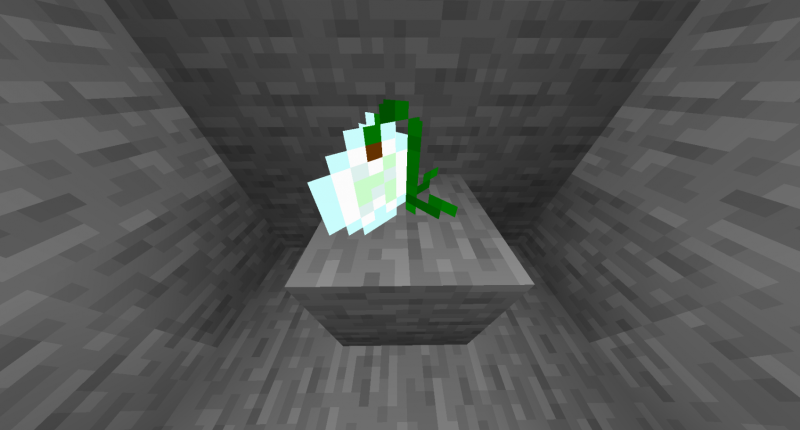 To clarify: this is not a stolen idea from someone else, rather I decided that the gas feature from my Herbs & Spices mod would do great on its own as an independent mod. No one has copied anyone, I own both mods.

This mod brings a new plant into Minecraft: the gaspepper. When right-clicked with a glass bottle, it will become a spent gaspepper and give you a gas bottle. Each gas bottle will smelt half a stack (32) of items in a regular furnace and will give you back your bottle. VERY IMPORTANT: once you've collected your gas, it's extremely important that you right-click the plant again, otherwise it won't grow back. This applies to all but two of the variants of the plant. (Immortality and Chester)

The gaspepper, however, is not alone, it comes with seven new variants and more coming in the future. They are made in one of the mod's new machines called the Masher. You put a gas bottle in the yellow slot, a gaspepper in the grey one and a specific item in the black one. The pink ones are just storage space. Trident = Thunder Pepper (Gives Slowness 5 and damages anything that touches it. Don't collect its gas or it'll go back to a normal gaspepper)   Dragon Head = Megapepper (gives two extra bottles of gas per collection but only consumes one)   Ancient Debris = Golden Pepper (gives 16 gold nuggets, bottle required, can be boosted up to 21 by enchanting your bottle in an anvil with 'Metallurgy'')   Ender Chest = Chester Pepper (has 12 storage spaces)   Totem of Immortaliity = Immortality Pepper (Resistance 5)   Bell = Bellpepper (put harvested veggie in a crafting table to get a seed or eat it, fast eating speed)   Creeper Head = Ghost Pepper (takes 3s to eat and sets you on fire for 10s but gives Strength 3 for 3min). However, if you break the gaspepper, you don't get it, you get more seeds. Blow it up with TNT or creepers or whatever to have a chance at otaining the plant itself. Luckily, gaspepper and most of its variants can be planted on stone, the outliers being bellpepper which needs farmland and golden pepper which needs a gold block. Chester Pepper's main purpose is to be a versatile storage container that can be placed anywhere, and so doesn't require any specific block to be placed on.

In order to even obtain the gaspepper you're gonna need the other machine called the Fossil Reader that uses expensive Reader Cores to 'read' the fossil and instantly give you seeds. You may also use upgrade slots 1, 2 and 3 by shift-clicking in some Efficiency Modules, each one makes you get an extra seed per reading. Slot 4 is reserved for the Versatility Module, which allows you to use the Coal Filtering feature to extract a plant fossil from coal (20%) or coal ore (45%). Each reading damages all Efficiency Modules, which have 10 uses, by 1 and each attempt at coal filtering damages the Versatility Module, with only 5 uses, also by 1, no matter the outcome. If you want to, you may also craft a Portable Fossil Reader, which just has the fossil reading and one space of storage, and items inside don't stack over 1. The other way to obtain plant fossils that doesn't involve wasting nether stars and netherite scraps is to go to a Jungle, Jungle Hills or Jungle Edge biome and dig down to y=25 or lower, and mine around. Ravines are your best friend here. Down there, you may come across a vein of 1-4 fossils that each give one fossil when mined with iron or above.

Lastly, two new enchantments have been added for the glass bottle. They are Gas Collection (obtain an extra free gas bottle per level each harvest; 3 levels) and Metallurgy (obtain an extra gold nugget from harvesting golden peppers per level; 5 levels), and because enchantment tables won't allow you to directly enchant bottles, you'll have to enchant books and then put them together in an anvil. Once you use the bottle once, the enchantment is gone, so use it on megapeppers to get 6 bottles from just one!

For the recipes, just use JEI, it works fine.

Let me know if you have any cool ideas you'd like added to the mod in the comments!

Oh well, it seems that this mod absolutely flopped. I'll leave one last update (1.2) that adds a new boss and a new machine. Goodbye.

1.1.2 - fixed a minor bug and gas bottles made unstackable