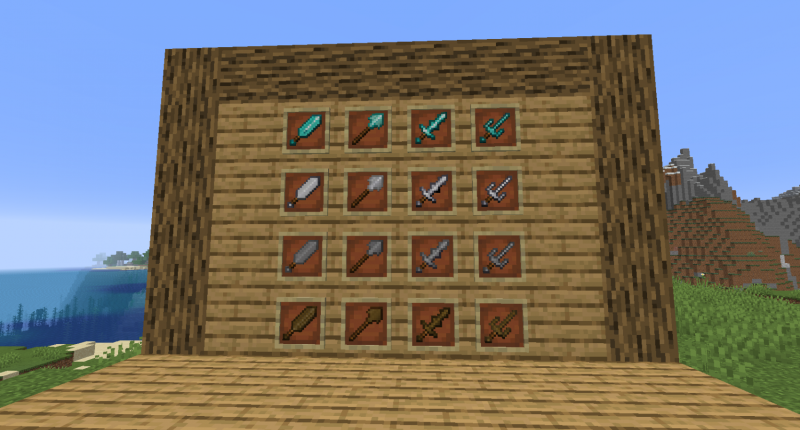 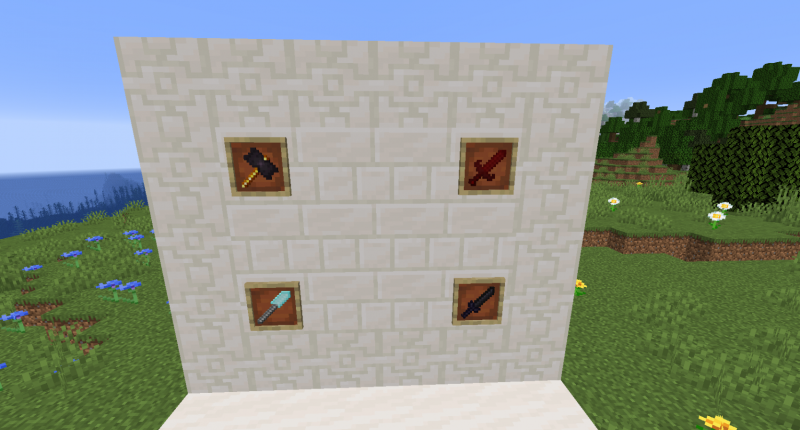 This mod adds  8 new types of weapons, all of them have unique features. Four of them can be crafted with the regular Minecraft materials (wood, stone, iron and diamond) whereas the other 4 are quite harder to craft, however these have unique powers and are much more powerful than any other regular weapon.

The common weapons are:

Bone breaker: a heavy and slow weapon which applies  "incapacitation" on hit (a debuff which doesn't allow the enemy running).

Spear: it's a melee weapon which can also be used as a ranged item such as bow.

Chopper: a sharped sword which applies "bleeding" (a debuff that deal damage over time, but if you have low health it will deal more damage )on hit.

Sai:  this is probably the most complex common weapon, it’s a fast weapon which applies the "expose effect" when you hit an enemy, if you hit an "exposed" enemy, you will deal extra damage to him, but he will be no longer exposed.

The legendary weapons are:

Ares Warhammer: a heavy hammer that deal an insane damage and incapacitates de enemy. When you press right click, you will shout, getting a huge buff and summoning a lightning (this ability has a large cooldown).

Thunder spear: this spear is much faster than the regular ones, when it hits an enemy it applies to it the "electrified" (a debuff that makes increases the chance of getting struck by a lighting during rain, it increases even more during thunderstorms) status effect and has a chance of summoning rain.

Crimson sword: a short durability sword which applies bleeding to enemies and has much life steal, you can right-click to repair the sword by dealing some damage to yourself

Night edge: an incredibly fast sword which exposes enemies and allows you to run faster and be invisible briefly by clicking right click (this ability has a short cooldown).

there is also a new command that i made during tests you just need to type wrath_of_the_gods to summon a thunder storm and make lightnings strike all entities including yourself.

I'm happy to receive constructive criticism and feedback. this mod is available on both Spanish and English