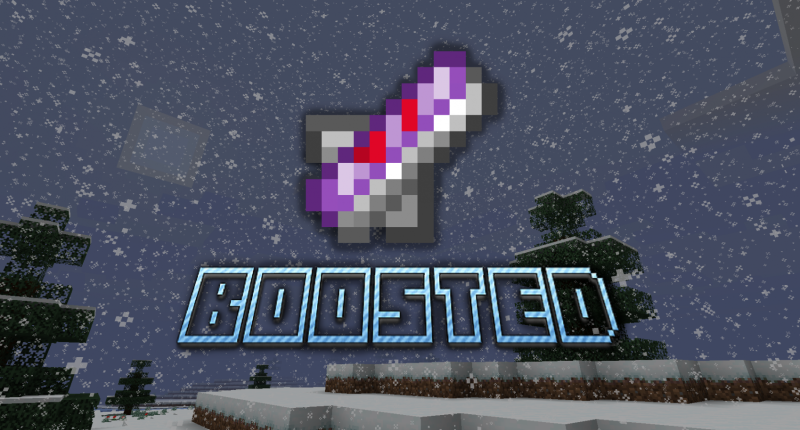 Hi there! It's FireWorks_CreepeR and I'd like you to introduce my new mod: Boosted.

This is a small mod aimed at creating simple gadgets that change your movement. Yes, boosters won't launch you. They'll be modifying your movement in all the directions by their own multiplier. Those are ranging from x0.0 speed up to x8.5 speed which has many potential as long as you use them correctly and get into timings.

- Empty Booster: Crafted with 2 pieces of paper and 3 iron ingots it is the key to crafting the rest of the boosters. Each following one after the primitive one will require the booster from the previous tier to craft.

- Accelarating Boosters (Primitive/Advanced/Powered/Radiant/Blasting/Crystalline): Each one of those will require 8 sugar, gunpowder, redstone, glowstone, blaze powder or end crystals correspondingly and the previous booster tier to make. These will accelarate the player's movement velocity on right click in all the directions (x1.5/x2.0/x3.0/x4.5/x6.5/x8.5). That applies to any movement of the player being either simply running, jumping, falling, flying on an elytra and so on.

- Sticky Booster: This booster is made with an empty booster and 8 slime balls. It will instantly stop the player's movement for a short amount of time and limit it with the "Sticky" effect for 3 seconds.

-Sticky Effect: Sticks entity to the ground. While having this effect on them the mobs will not be able to jump normally (significantly less than a complete block) and will be moving much slower than the usual. That also affects swimming and flying. The potion of adhesion which gives this effect for 0:10 is made by brewing a slime ball into a thick potion.

That's it for my mod at this point. Hope you enjoy jumping from mountain to mountain or whatever you would want to do with these boosters. Don't forget to keep up with the mod and update it as it's quite likely to become bigger in the very near future. Bye!

Pov: you are late for school

How did you get the 'sticky' and 'adhesion' effect? Cool mod btw!

Thanks! So basically the adhesion is overwriting the entity's x,y and z velocity to 0 speed every tick the entity has the effect active on it.