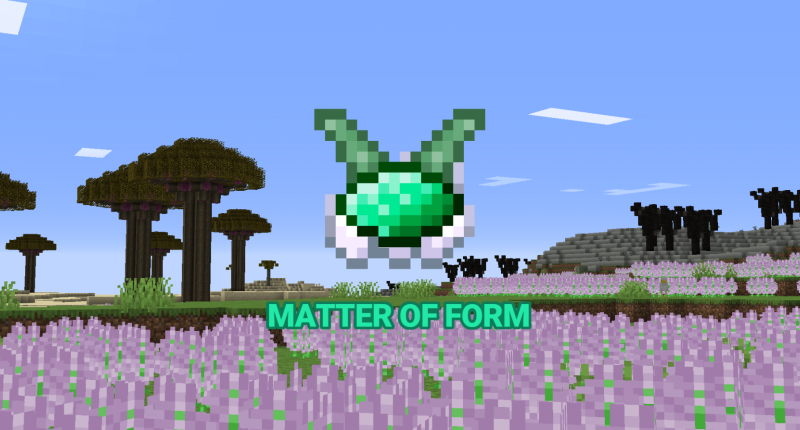 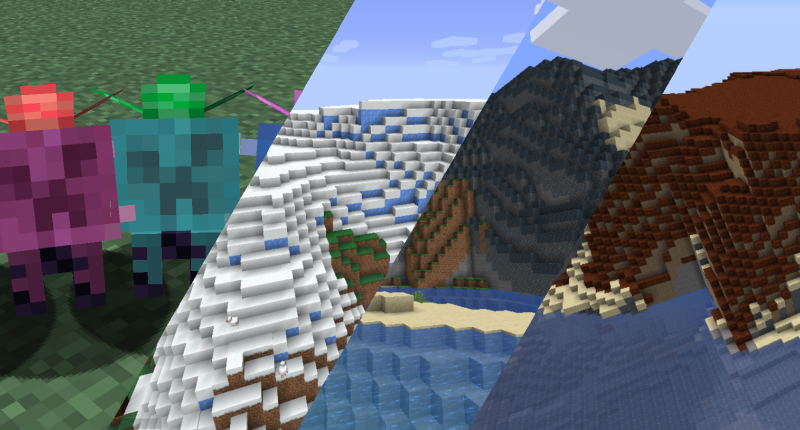 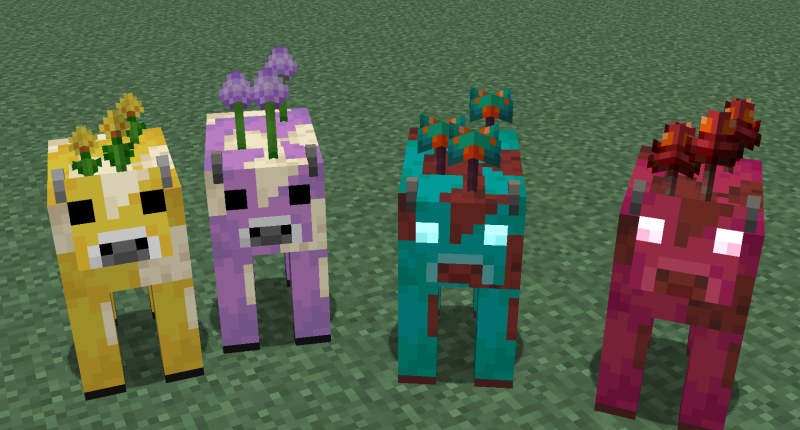 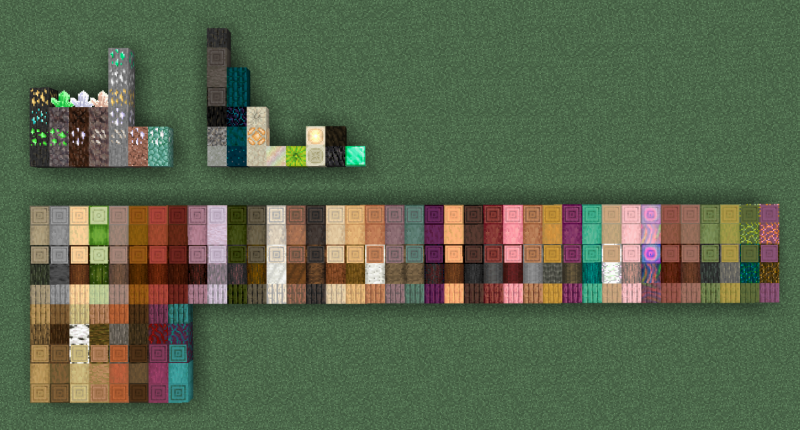 Some of the blocks to expect in version 1 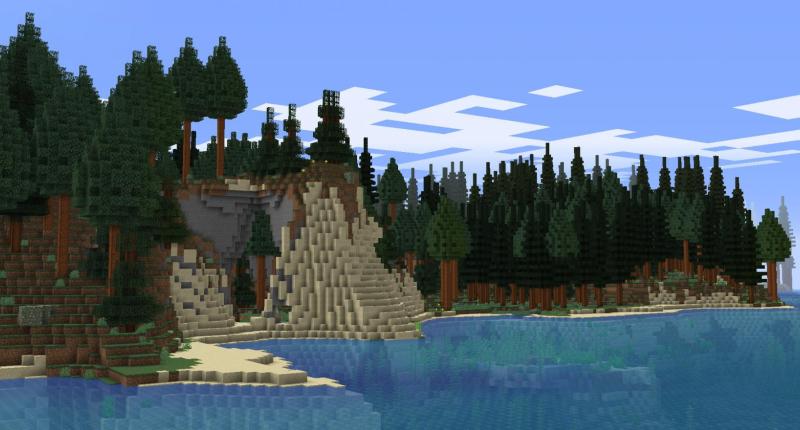 A Fir Forest meeting a sea 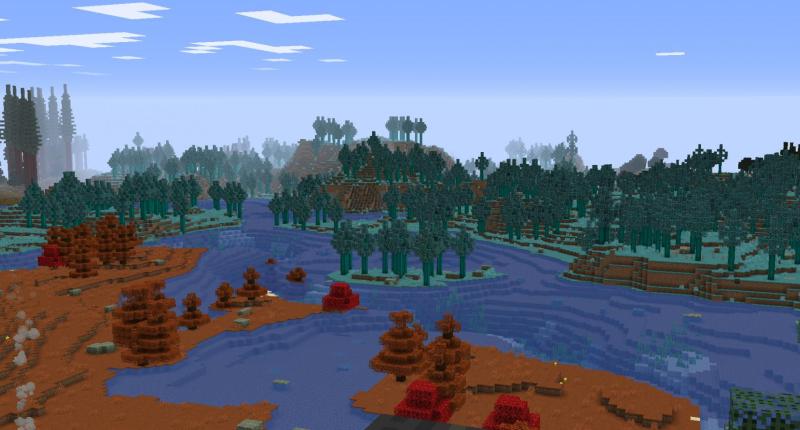 Sprouts are an Ecological species of passive "creepers" that cultivate unique plants to the biomes they inhabit. Jasper Sprouts specifically have a unique crop known as the Jasper Bulb, which can be used for regeneration potions that do not require going to the Nether.

11 New Biomes were added including the new (seasonal) biomes like the Gourd & Boneyard. - These are the final new biomes of the mod, and no more will be added in new updates.

Matter Of Form is my largest mod to date featuring 77 new biomes, an enormous amount of wood types, many new resources & so much more that pictures simply cannot capture all that is here. You can explore the world throughout & potentially come across a new biome you have not seen before!

(THIS MOD IS NOT COMPATIBLE WITH REVERSION OR IMMERSION)

Any Bug Reports or issues with having both Matter Of Form & either Reversion or Immersion (my 2 previous mods) will not be considered
This is the official sequel to both, and will eventually suffer an enormous amount of conflicts with both mods.

Choose your destiny in this game-changing mod
- Explore the world as a nomad, collecting each unique type of wood to sell to fellow player
- Protect the irreplaceable Boojum Trees from exploitation - or wipe them off the face of the overworld
- Find the ultra rare Jasper & Aum forests & live out your life as the protectorate of magical biomes
- Or for the most epic of all - Explore the remains of what came before in the Ashen Biomes, discover the secrets presented & find uses for the unique resources found there.

The choice is yours Traveller

On occasion throughout your world you will discover new & unique items that may be of use to you
Things like Jade, Rock Salt, Overworld Quartz, Uraninite, Sulphur & Nitre can be found across various biomes and can be used to take the edge off of farming creepers for their gunpowder or building with Quartz & Jade to signify purity. Or go after the rare Ashen Stone, Latite, Pholite & Alum to build unique structures from.

Throughout the world you can come across peaceful creatures such as the Mooblooms or Sprouts - Sprouts are Ecological Preservationists & will occasionally plant native or unique plants to the biomes.

The world is forever changed by 77 new & unique biomes dotting the landscape, ascend to the top of the Granite Peaks & Claim the top of the world as your own, burrow in the Mud Flats to dissuade all but the most patient of travellers. Or perhaps get lost in the Eldritch Forest or simply go searching for the exceptionally rare Aum wood.

With over 20 different wood types & a wide variety of new resources exploration is a must, each specific wood can be found only in their specific Biomes.

In future versions, plans for additional Biomes will be created, and I will always reserve those biomes until a massive version change, there will be ample warning to any additional biomes about a week before the update is planned to release. I will always be sure to keep an open channel concerning changes that can mess with worlds.

So you might be wondering - What are the plans with this mod, the plan is to make this the most expansive & unique mod for minecraft & include within it several submods that all change the game in new & unique ways. Each update will attempt to flesh out each & every biome that has been added, and eventually create an immersive & atmospheric mod that allows the ultimate level of creativity with no loss of Form.

As of Version 1 we have only just released - and while the mod currently focuses on adding wood types & biomes, we intend to flesh out every single area of the game to make a totally transformative experience of minecraft.

Future updates will further flesh out these biomes.

Very nice mod :D. I havn't never seen so much type of wood in a mod

Thank you! I wanted to go bold & far with the wood types so adding tons of unique ones was the idea since the start!

i wish i was as creative as you are! i made a mod with 3 different biomes and the mod's name is: New Biomes

Woo, another mod by our dear Aethelwyn, and looks awesome :D will you drop Reversion, though, or just migrate its features here?

A bit of both, Reversion isnt receiving anymore updates, and most features (except most food ones) will end up over in this mod. Essentially Reversion is being dropped into this mod with vast improvements. (Ducks & Palm Wood have already been transferred over with various improvements)

The plan is to just make the more specialized things (nether, food & farming, etc features) into a different submods & addons

Great to hear then! I loved both Immersion and Reversion, and seeing that you are on your way to find right path is really uplifting ^^
If you still want me making a translation into Polish, I'm totally open for it ^^ (I had tough time lately, so couldn't finish the one for Reversion, but maybe that is for the better now)

I wont need translation for quite a while i'd say
I'm hoping to start the translating work well into the future, but for now im not too worried about it

This is the new Biome You'll Go of MCreator. I can't wait to see the progress of this mod!

I'm flattered to even have a mod called anything remotely comparable to BYG, thank you so much!

Palm, Jasper & Boojum now have recipes again
Mud has been changed to Silt (thanks 1.19), and both Silt & Peat now have a use
tons of new fixes have gone through, aswell as compatibility with other mods using forge tags
and much more!

I have added a couple of new things, including the beloved MOOBLOOM (+3 variations of it)!

You can create a moobloom with the correct flower/fungus type, or find them naturally

Wow nice, I'd suggest you reduce the amount of killer ducks in their biome, they can be quite resource intensive 😅. Would love to see more mob diversity (as well as making them useful in one way or another) in these biomes though, mooblooms are a great start :D

Thank you Matej! - I did find the Killer Duck spawning this morning, and while it'd be fun to have a biome full of Ducks that may or may not be out for blood, I have reduced it like was needed. Hopefully getting that fix out with some extra biomes this weekend.

I'm currently trying to figure out how to get bees to collect nectar from the Mooblooms, but so far haven't figured it out; I'll take the mob diversity & usefulness idea to heart though! Working on 2 new useful mobs at the moment to spruce up some of the more unique biomes.