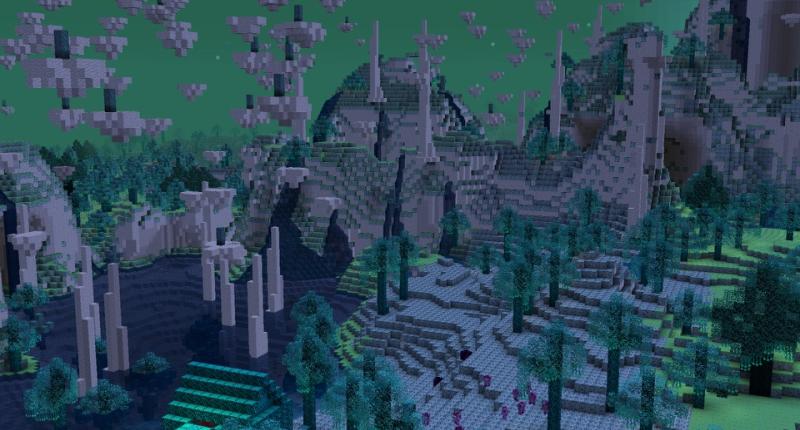 Some Aether biomes coming together 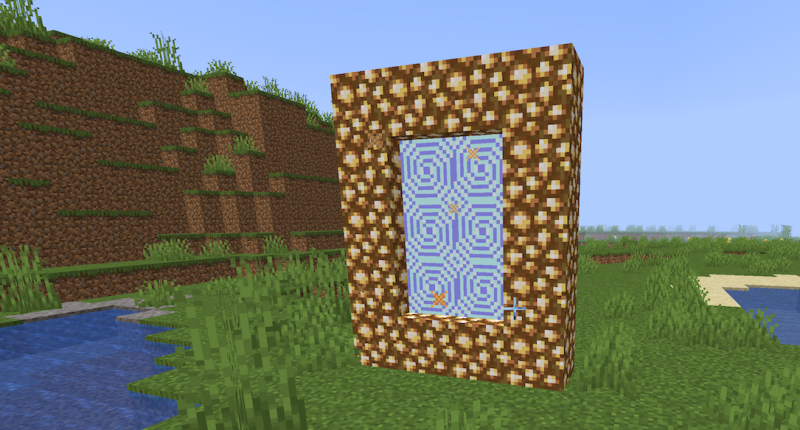 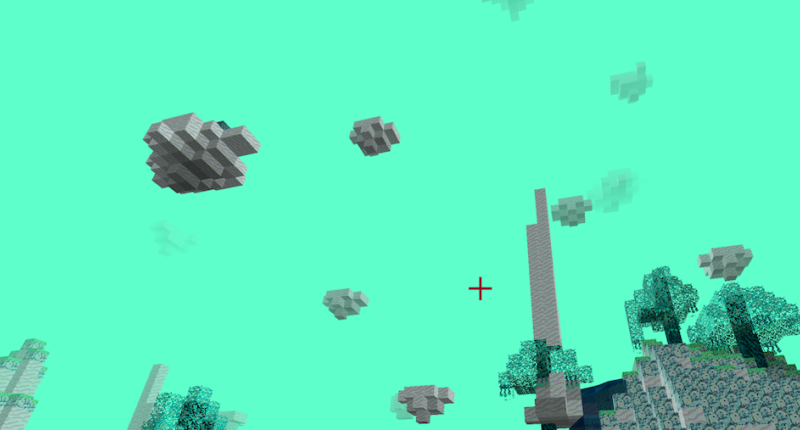 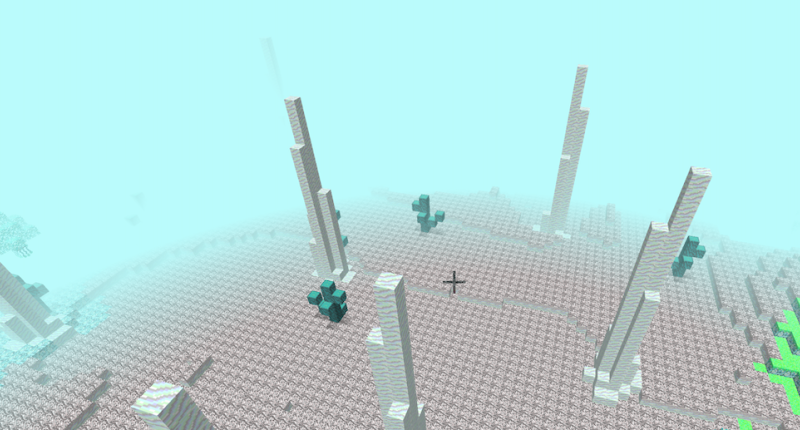 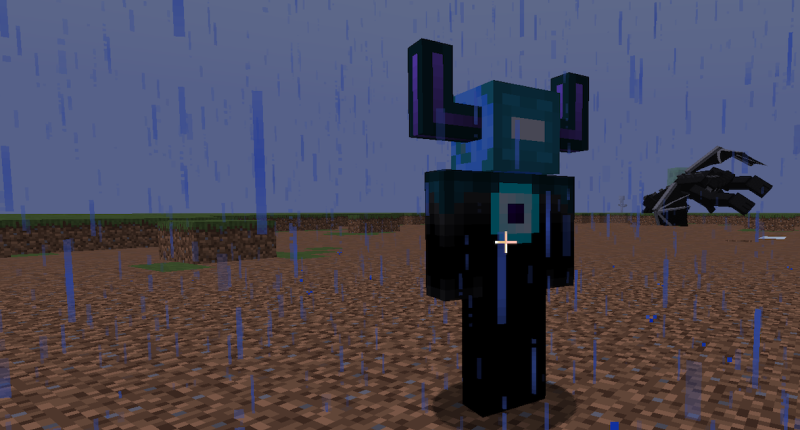 Welcome to my take on the Sky Dimension!

The Aether is a custom dimension made by me very loosely based off of the mod of the same name popular in 2014. It adds several new features to the game and is still in development haphazardly by me, so stay tuned for future updates.

The Aether is a dimension set in the sky with an overall theme of blue and turquoise in contrast to the oranges and reds of the Nether. Trees generate here and you can set your spawn with beds and place water.

The Aether is sustainable with food sources and regrowable trees.

To access the Aether, kill enough Watchers to get 4 Aetherwave Charges. Then, combine them with an Elytra on a crafting table. Use this item to light a glowstone portal designed like a nether portal and you’ll be there!

All warnings aside, be careful about the Aether at night. It can easily become the most dangerous nighttime dimension as it is the most peaceful during the day.

The Aether has four biomes. The Lush Aether has a bright theme and generates trees and Mage Houses. The Dark Aether Forest is a variant that has more trees and bigger trees, plus (hopefully) more upcoming features. The Aether Barrens is dry with dead trees and has fossils. Finally, the Fractured Aether has massive tall spires and floating islands.

Bacon is a passive mod that enhabits the Aether while Exe is a very dangerous one that spawns at night. Watchers are flying mobs that will attack you, but they have very valuable drops needed to get to the Aether. In the Void dimension, beware of Void Squids which float about and defend themselves with lightning. There are also various joke mobs and a unfinished boss mob.

6 new ores. The Aether has four: Sky Iron, (which drops regular iron), Shardium, (which is kind of a mixed fuel source and redstone component), and Glowstone (which is self-explanatory) Osmium is the diamond of the Aether - the new super-material that is rare and makes powerful equipment. Finally, AEternium is an ore found in the End. It is similar to Osmium but slightly weaker with some interesting properties.

Void Steel is unique to the Void dimension and is used in advanced crafting and commands, but those are not yet finished.

The mod was originally intended to be a joke mod, until I added the Aether. The content is still there in secret Overworld biomes and a secret dimension. Don’t worry about it much, though, because it won’t negatively affect your gameplay.

Enjoy! Don’t get mad at me if you don't like it.

Updates will be made semi-sporadically.

0.0 - Existence of the mod as simply the joke portion of the mod.

0.1 - This version added the basic dimension and a few tree structures and limited resources. Not all Aether recipes were implemented by this time. The ores shardium, osmium, sky iron, and glowstone were in the game but with little accessibility and functionality. Added the Exe and Bacon mobs.

0.2 - Added more variants of trees and a Mage House as a rare structure. Added the Shardium and Osmium blocks and added wood as basic fuels in the game.

0.3 - Retextured everything related to Osmium and the Shardium item. Added fossil structures in the Aether Barrens biome. Also added the Aether Wood stairs, fence, and slab. Made all wood objects in the Aether smeltable and added Blasting recipes for every ore.

0.3.1 Fix - Balanced structure generation and made Exe burn in daylight to prevent hordes of them existing at all times.

0.3.2 - Added AEternium as an ore on tier with Osmium and found in the End. A few other tweaks might have also been made. Also finally figured out the texture for Enriched Dirt.

0.4 - Added the Fractured Aether and Dark Aether Forest as biomes. Added Large Trees, steeples, and a lot more custom bits+pieces. Made the Error arc of the mod better with a new potion.

0.7 - Finished the Amogus portion of the mod while adding a new biome for the Overworld and a new dimension with another high-tier building material. There is also a secret boss in the game but only available through the Creative Mode inventory or through commands.

0.7.2 - Added more Advancements and reorganized them. Also fixed an error in the Ejected/Void dimension.

Hey everyone! Before anyone mentions it, yes, I am aware of the major 2014 minecraft mod of the same name. This is not a rip-off of said mod, I just liked the name and concept, and then made it my own. Thanks.