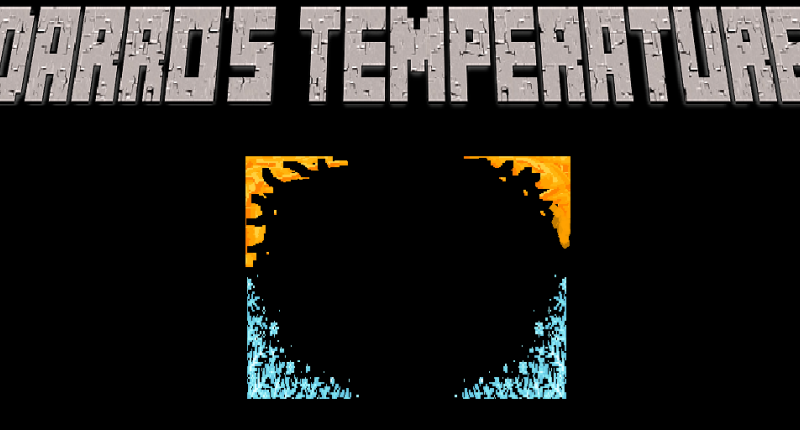 Darro's Temperature is a mod which attempts to inject some interesting mechanics into the game - namely temperature! This comes in two parts - player temperature and crop temperature.

In addition, I tried to make this mod very configurable. Nearly all variables can be altered via the config file that will automatically populate in the config folder.

The various parts of of ambiant temperature are all configureable. So if you want a world where the sun is unbearably hot, or the water viscously cold, you can make that!

Living in a world with temperature means that you need ways to alter the player temperature. Here are some of the ways this can be done:

Armor: Wearing certain armor raise or lower your temperature. Gold cools you down (thats why do the piglins like it so much!), iron warms you up! Additionally, you can enchant your armor with temperature based enchantments to help!

Eating: Eating certain food, like cooked beef, will warm you up. Eating food like apples will cool you down!

Building: If you want to build a base in the frozen peaks or deep in the nether, you might want to think about how to the blocks to use on the interior.

Potions: Fire resistance and cold resistance potions will make you immune to temperature effects for a time.

Thermometer: The is an overlay which broadly describes player temperature and ambiant temperature. You can build a thermometer that will give you a lot of data about about your current temperature.

This effect is toggleable by configs. Now crops will break in unfavorable conditions. Growing wheat in cold weather is a no go, growing carrots in hot weather will fail. The changing of the seasons (configureable) will also have an effect on this.

Again, this is all done by tags, so datapacks can be used to add in or change what plants break under what conditions.

- 0.2 Made some updates to overlays. They should now display properly.