Hello fellow MCreators,
Recently I started to organise my ideas on mod I planned for almost half of a year (as I discovered existence of MCreator).

It's going to convey my small steampunk universe I'm making for years (created mainly for books/game creations), but I thought it's perfect use for mod Minecraft was lacking as far as I was searching. Weapon mods are often OP, steampunk mods are too vanilla-unfriendly and aimed on different things that I wanted. Also I wanted to add some things that are crucial for Minecraft, but Mojang never tried to incorporate them (yet).

So, long story short, things I want to invent in WoB are:

- airships (structures on air across Overworld and End, being source of new items)
- firearm weapons (balanced and with various aesthetic & gameplay features)
- various other weapons I miss in vanilla (swords, ranged weapons and all between)
- some new mobs (mainly illagers travelling on airships)
- new herbs & small decorative stuff (plantable)
- new blocks in steampunk vein
- renewable sand (from herb called "sand veil")
- two tiers of armor/tools (lava and cirtain, being on respectively diamond and "above netherite" tiers in my universe)

There's already mod page on MCreator with latest version!
I will be happy to get your feedback - you can write it here, on mod page, or on Google Docs survey I made for that.
If you don't know how to use this mod, you can also look at wiki / guide I created. I hope you will enjoy it! More changes still to come :)

There is also bug tracker available, if you are interested in more in-depth vision of mod, or if you don't know if bug you encountered is known.

(In my mod there is a lot of steampunk stuff in the overworld but it is very futuristic when you go to space.)

This mod sounds pretty nice and I hope to play it :)

Great that you liked it, FreddyFoxGam3r :) which mod you talk about? It can be inspirational for me, not to mention I love futuristic stuff, as long as it's not in my "vanilla-friendly modpack" :D

And as for your playing, it would be great! I will create mod page & make public test version soon, when everything basic will be available (mostly talking about working firearm crafting & use). I hope it will be soon, but I have yet two private snapshots to finish (v0.a3 adding new stuff, and v0.a4 cleaning bugs & making further gameplay features with weapons)

After all that time, I changed some plans, and seems it's v0.a5 being the first "public release" - bug-related update was moved due to ideas coming to my mind. The good thing is - mod will be more complete at that v0.a5, because I already added most background I needed. Even greater thing is - in v0.a4 (currently working) I added airships, which I absolutely adore and am proud of! Just take a look: 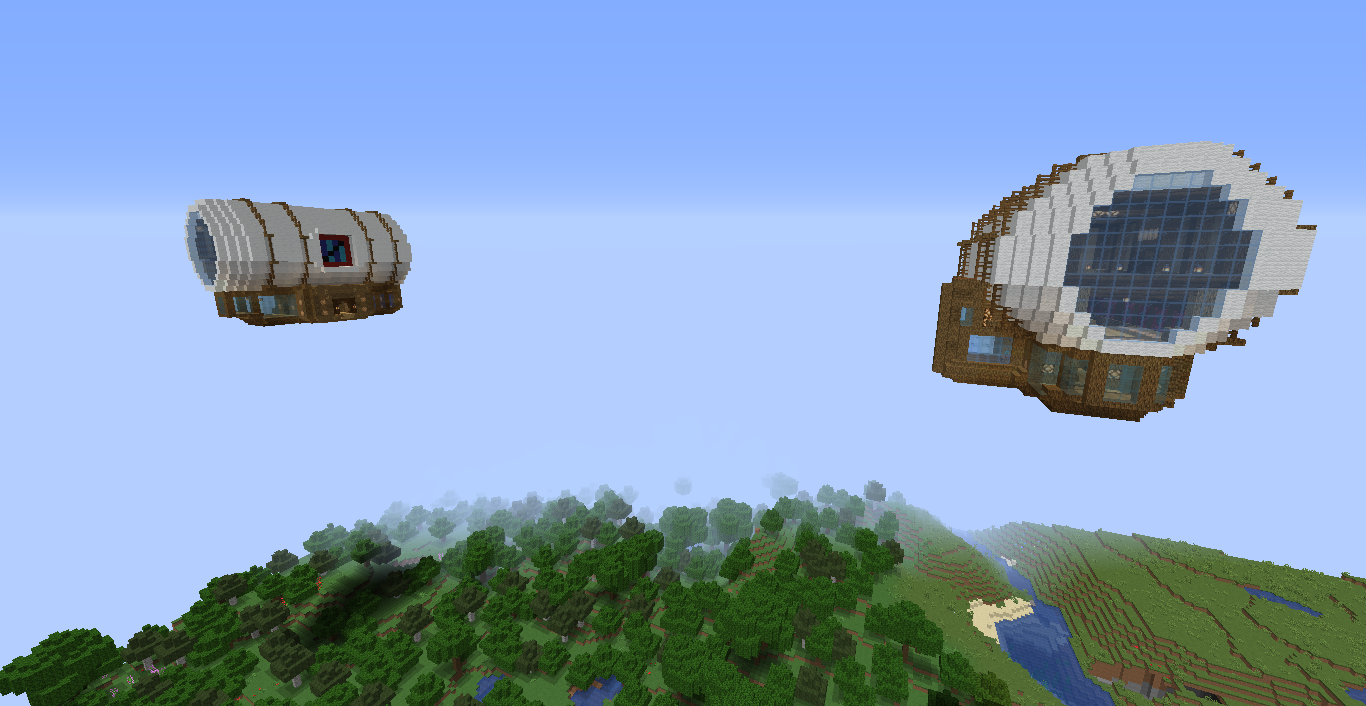 Version v0.a4 is going strongly, and depending on how much "bug-aimed" I want it to be, it will be finished really soon, or a bit later.

Mechanics on firearms and waraxes are still placeholder-like, but that should be fixed in v0.a5.

This looks incredible so far! I can't wait for a public release!

I'm more than happy to announce v0.a5 being released and published on MCreator page!

As I promised, v0.a5 focused mostly on bugfixes, and most crucial bugs were fixed. Unfortunately different bugs appeared instead, but with progression done by far, I couldn't wait more, so here it is - unpolished, but quite complete public alpha version.

From v0.a4, most important changes are:

Wallpaper screenshot for not leaving you with just plain text: 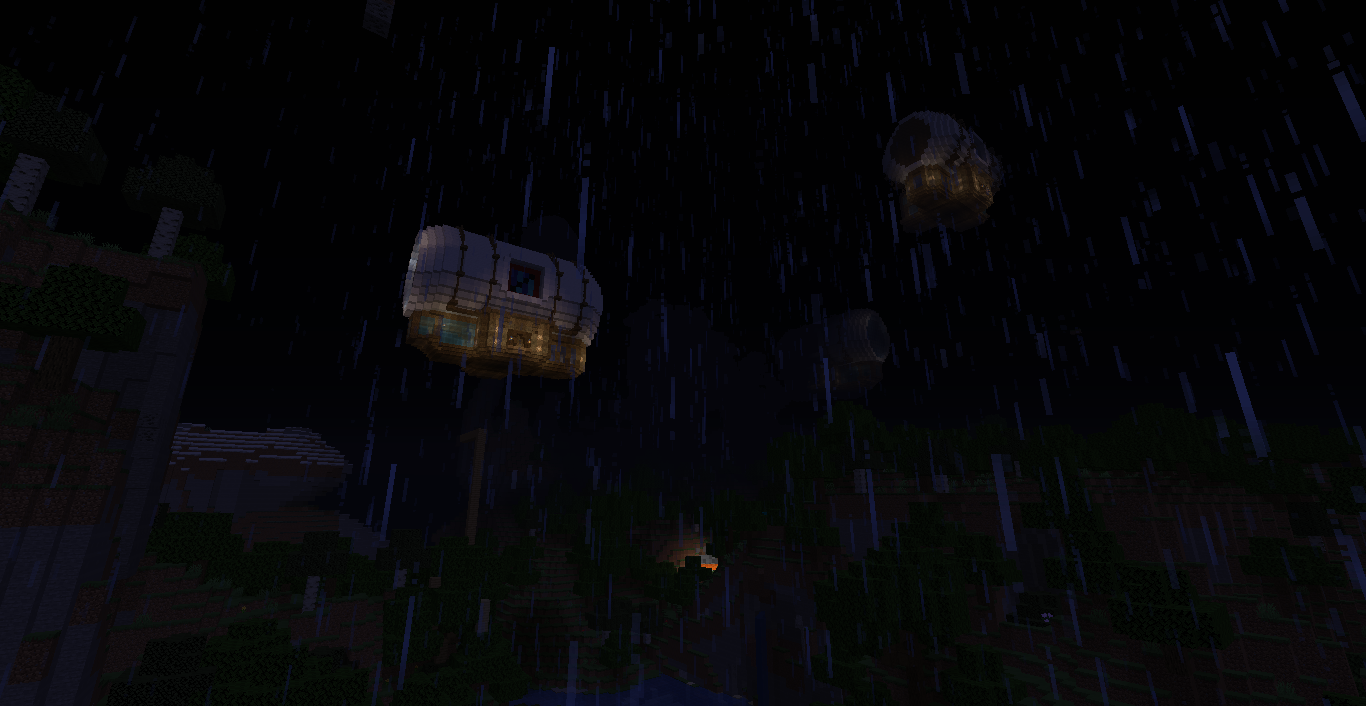 Also thanks a lot for being here and motivating me with your kind comments :) I hope v0.a5 will be at least fulfiling half of your expectations, and that with next versions I will make this mod even better!

Hotfix Update (v0.a6) is here! Much faster than I anticipated, but releasing previous version with crucial bugs gave me motivation to sacrifice two days and work everything out fast.

After that, I will probably take a short break to catch up on my life, but of course I'm always loving to read your feedback and ideas ^^

"I will probably take a short break to catch up on my life"... I am never good at such promises. New update is coming very soon, and I expect it to be that week - it will make further accesibility features for firearms (such as checking out how much ammunition you have, unloading weapons and.. something unexpected which I won't spoil yet :3). Other than that you can expect new weapons and subtle things that can make life easier.

I have also thought out about v0.a8 version. So you can expect both updates quite fast, as I already know what to implement in next one, and the one I'm currently working on is almost complete and without bugs, as far as I checked. The only remaining thing is to revamp firearm sounds, as most of them have no dedicated ones.

But announcements aside, I'm happy to announce that actual version (v0.a6) for 1.16.4, is compatibile with BetterEnd mod for Forge! I played it recently and didn't find any bugs by far. Though shooting endermen with firearms is totally lost cause.
Below is the screenshot of airship generating in End dimension, with BetterEnd mod generation loaded. 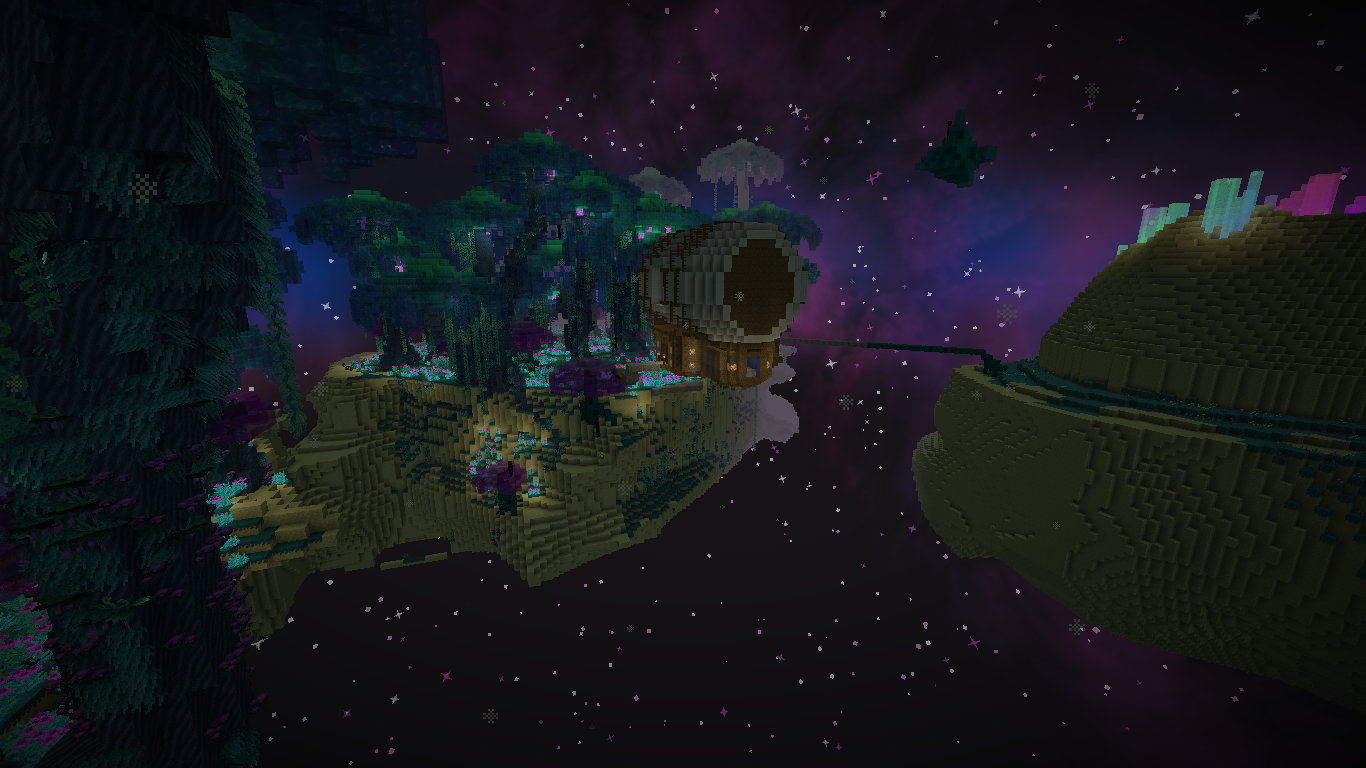 It's especially huge event for me, because I created WoB mainly thinking of it being used with BetterEnd and BetterNether mods (which I strongly recommend, by the way).

As I promised, I deliver! Today is the day when v0.a7 is released, introducing firearms mechanics going much further!
This post will be long, because I have many things to share, but if you are here to just know what's new, I will separate different topics and you will be able to focus only on update, if you want.

Reload Update, as I called v0.a7, brings much more accessible firearm use, some minor fixes and, of course, new weapons. And actually, new tier of firearms, which is shotguns. Basically, in v0.a7 you will get:

In previous post I mentioned that I have already plans for v0.a8. It will be called "Glass Update", and it will be biggest WoB update to date, introducing huge amount of new glass panes/trapdoors, and change with airships. This will be also the last update I will make before longer break to regain my energy.

Shortly, but surely, you can expect:

I decided to stay with 1.15.2 Forge generator at least to v0.a8, so if you prefer that version of Minecraft, don't worry about 1.15.2 support. I also started to make additional port since v0.a6, so currently there are two versions of Minecraft supported.

The thing I mentioned since the beginning, that I want to have port for Fabric, seems to be quite difficult to make. Since I don't know which MCreator files answer for API generation, and which one for mod's content, I see two paths I can go:

Since new version will take long time to make, I will try to test first option as long as I can. But, if I don't find anything, I will be forced to reimplement everything. Better now than at the end, huh?
So, if that second option will be the only one, I will take a really long break, but in that time I will be making Fabric version, to reach the state of development of Forge one. After finalising that, both versions will be developed in the same time, meaning you will have slower updates, but both APIs supported.

This is just small announcement, but I also started side-project that I feel doesn't fit Wastelands of Baedoor that much.

Spires of Baedoor is "magic update", and while there are lots of better mods adding magic to world of Minecraft, I will try to make it as much vanilla-friendly as WoB. Spires of Baedoor should be seen as a standalone expansion of WoB, being made on the same lore and principles.

Development process on SoB, though, will be really slow and I can't even promise SoB will come to public alpha stage. It's just something I planned, I started, but no idea where will it lead.

What a grind! But well, everyone, I'm happy to announce.. v0.a8! There is an update adding so much, that I don't even have words to list. In that update, you get 221 new blocks alone! :D I wasn't joking when I was saying it's biggest update so far.

Now I'm taking a break which I announced already, but as much as I am exhausted, I am in the same time so happy.
Next update (v0.a9) will mainly be bugfixing one, but you will also get new weapons - more early/middle game firearms, and finally more classic ones, which I will not spoil yet. Maybe also new herb, with very useful feature.

For Spires of Baedoor case I announced before, I think it will be my next mod. Working on it is very relaxing, and I can transfer some less-fitting ideas from WoB to SoB. But for the public alpha stage there's still a lot to do, and there's no option I will do it before taking Wastelands of Baedoor to late beta stage.

I estimate v0.a9 update for late April, and it will be much bigger than I anticipated, not only bugfixing, but also adding a plenty of things connected to hunting. Main aim is still on bugs, anyway.

Therefore though, I will really appreciate playtesting, and if you come across bug, writing tickets here, because my main focus is to improve as many things as I can. And for now it's less than I expect it to :D

I can also share a snapshot here, so you can report me bugs even from newest version (just include that note in bug ticket - that can help me). Actual changelog is available here.

My estimations are always foolish, but what can you expect, I love too much working on that mod :D

Version v0.a9 is now here! It adds a lot, despite being "bugfixing update" as I thought at first. It changed, because bugs I planned to fix are just a bit too much for me, and none of them are really serious in fact. So I decided to focus more on real content.

What you will see in Hunter Update, being v0.a9?

Also I added compatibility mark for Oh The Biomes You'll Go, because no bugs appeared for quite long time of play. You can see it on screenshot (yeah, there is long time since I uploaded a screenshot :D) 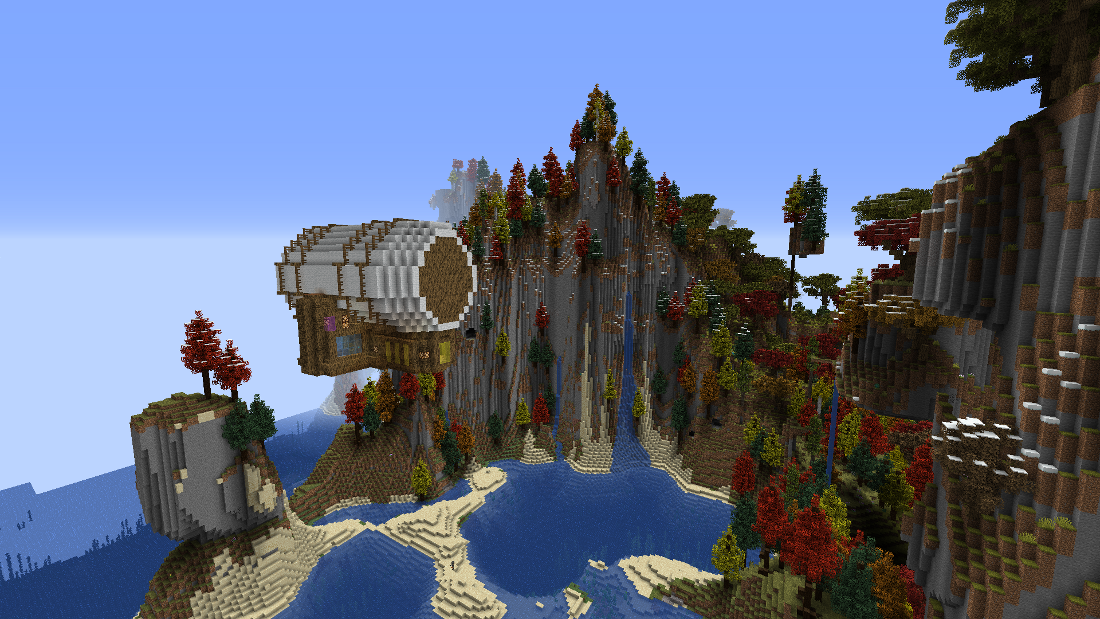 For the future plans, I expect v0.a10 version much later, as it will be massive update, adding first new boss, NPC, new type of airship, probably a lot of new blocks, items, and all of that. There's a chance I will even release snapshot versions here to get any feedback, if needed.

After that, WoB is most probably entering beta stage, and that will change some of my publishing guidelines, meaning less frequent, but bigger updates. But that's everything I can think of for now.

hey, I have a few ideas for this mod that I've been brainstorming for days, but just finished and decided to share them now. so here they go :D

(if you think the damage values are too high/too low, feel free to change them!)

Man, these ideas are brilliant!

The only problem with your ideas is that, I am still noob at MCreator x) so definitely will try to implement them in the future, but I can't say how far that future will be. But this is extremely helpful, so thanks a lot for the brainstorm, and don't hesitate to share more ideas if you have any! <3