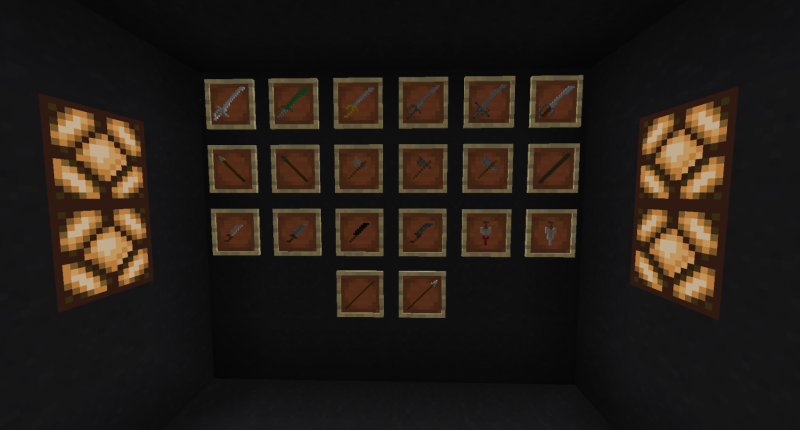 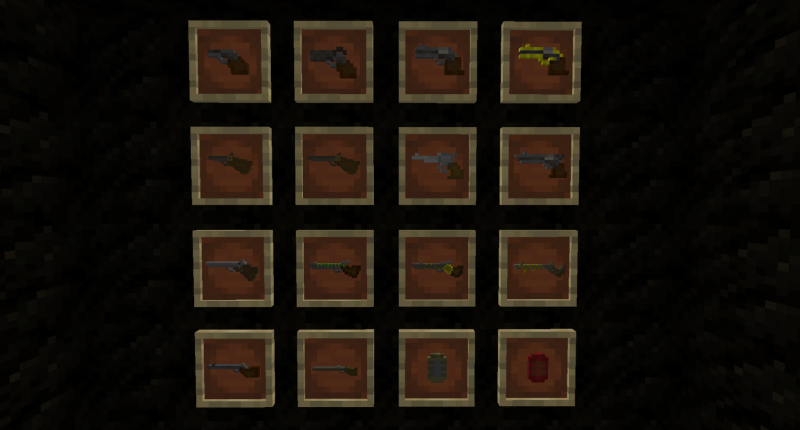 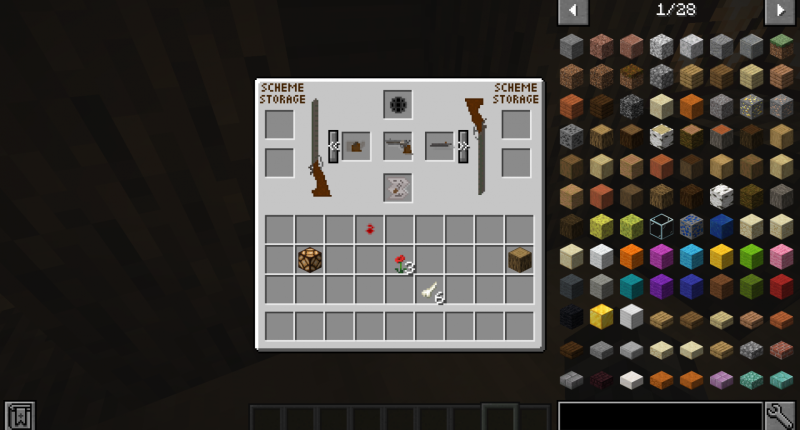 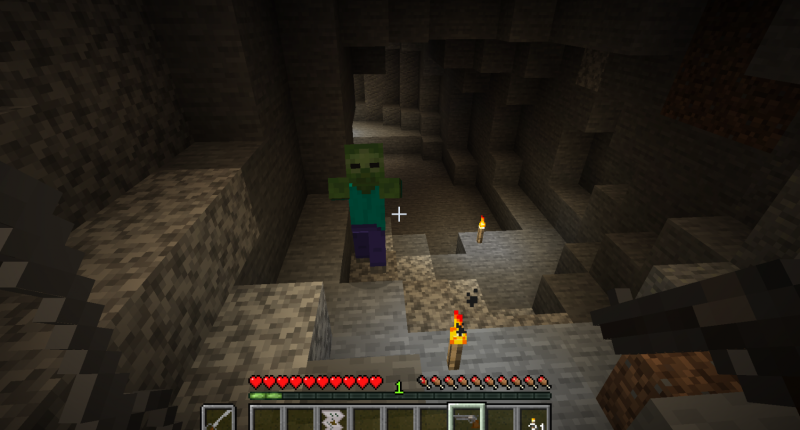 Then fight your enemies 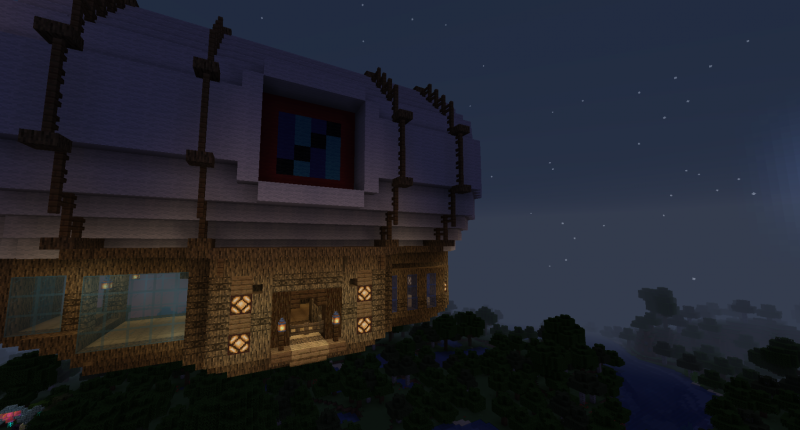 See new structures and use new kind of blocks!

Wastelands of Baedoor invents my own steampunk universe within Minecraft vanilla experience, adding new weapons, materials and mechanics, with subtle care to not ruin vanilla feeling.

Thanks so much for Mod of the Week!

Want to follow mod's development? You can join Discord channel or help by filling this survey!

Version v0.a11 features add-on support (allowing you to create your own firearms, sabres and spears), as well as some integration features for other mods to use.
You can create these already, but they will work only on snapshot, since v0.a11 is not fully released yet.
(Guide)

First of all, you get various new weapons, ranging from classic ones - knives, throwing daggers, throwing axes, javelins, spears, sabres:

To revolvers, shotguns and rifles, all with various mechanics (explained in wiki which will be at the end):

There's also a possibility to use a leghold trap thanks to Hunter Update! You can trap mobs to make your hunting easier. 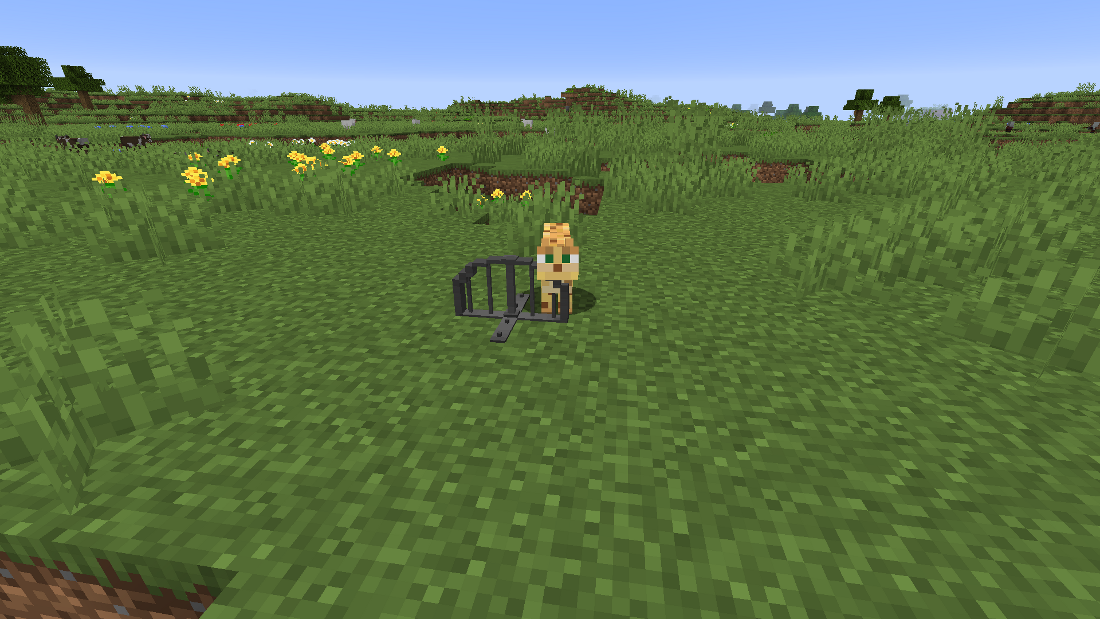 There are five types of airships floating in the sky of Wastelands of Baedoor mod - you can try to conquer them, if you have enough curiosity. Though be aware - its crew isn't the easiest enemy! You can also try to meet new civilization living in some of these airships... or even establish trade deals!

Some of these airships can also be cursed... but psst, don't talk about that here. You have to find it by yourself. Or read the wiki.

There are lots of things vanilla Minecraft is missing, and while this mod is mostly steampunk-y and wild west-y, it also tries to fill the holes of vanilla game in parts where there isn't much impact on gameplay itself... but there is much impact on player.

For example, now you can farm sand! It's finally renewable resource! 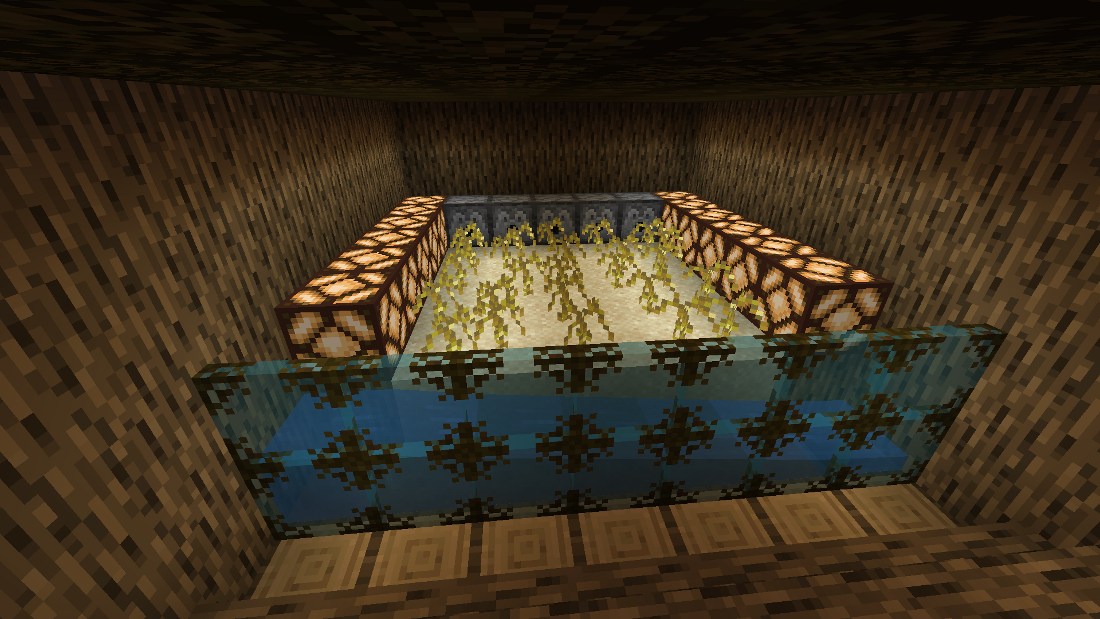 Maybe you are a city builder, or mega base builder, and want to have spawnproof base, with moody light and without placing carpets/slabs everywhere? If you ever dreamt about beacon having "mob proof" effect, then here you have. Something maybe even better. This little pillar is able to obliterate any night mob in vanilla:

Since v0.a10 version its effect can be extended on other mods' mobs, and also customized slightly (read the wiki for details).

Wastelands of Baedoor mainly focuses on steampunk stuff, so you get, of course, various wood variants which weren't in vanilla before. 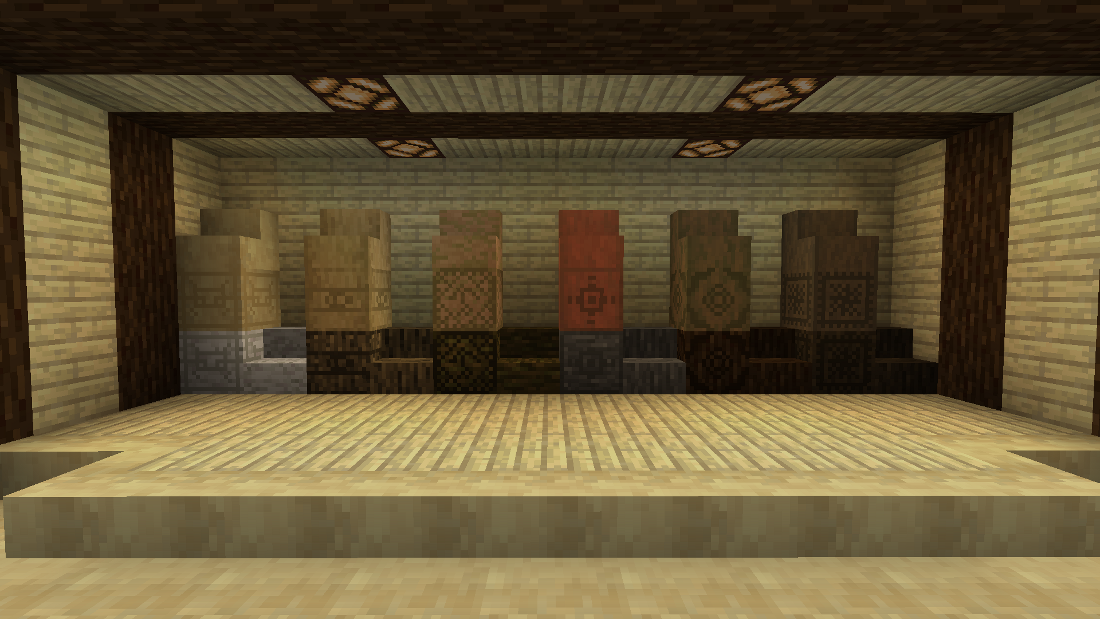 If you ever needed new light sources, there are also a lot of new lamp blocks:

You also get different green types of blocks - from the most expensive block (cirtain) which does not have any purpose now, to new type of quasi-wood: bamboo.

Oh, you got new music discs too!

You prefer blue? Perfectly, I prefer too. In this colour you will get many new blocks - lapis crystals, lapis lamps, or poor, abandoned blue nether bricks. 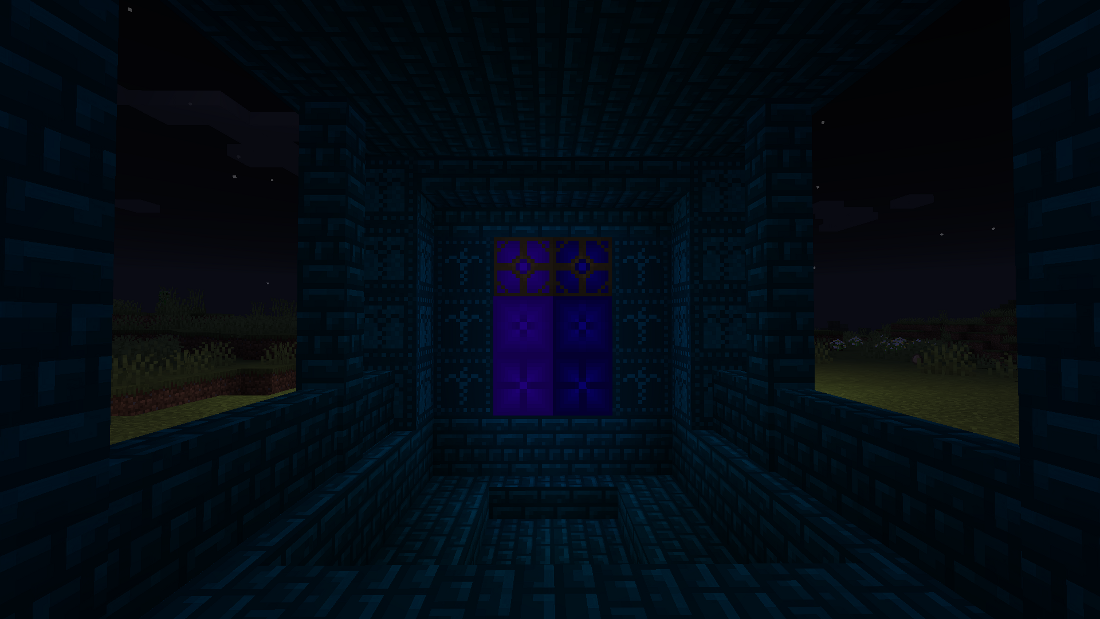 Do you like red better? Well, I have something for you anyway. 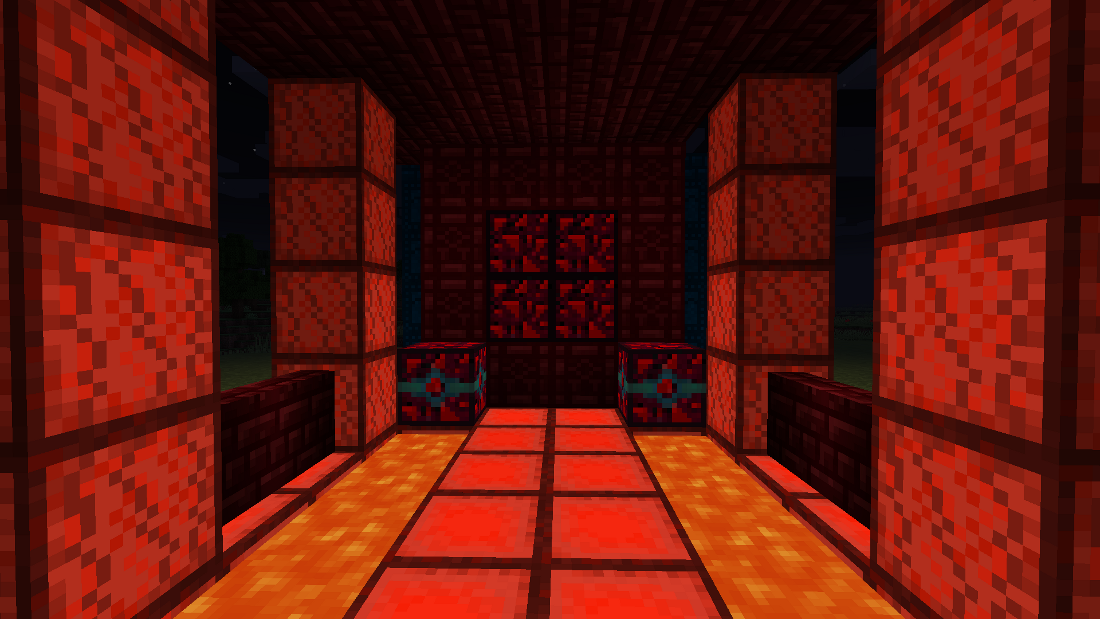 And yes, you see perfectly. There is glowing obsidian returning to game, and - I hope - I explained reason for it in mod "lore" enough. Of course you also get chiseled version of red nether brick, because that's outrageous vanilla is lacking it!

If you like building with black pallette, then you also got something more to build on. Black sand, and its hardened, polished, smooth and chiseled versions are waiting! 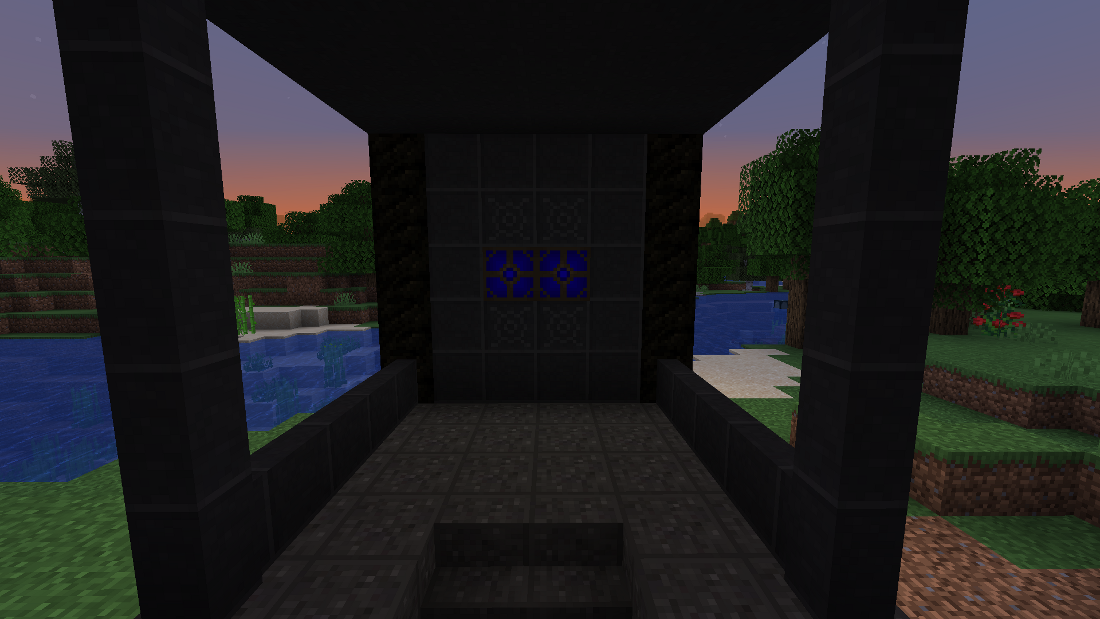 There are also yellow blocks added in v0.a10:

If you are tired of all these blocks, there is also a powerful dose of glass variants: horizontal ones (simply glass trapdoors) and 11 different framed versions of them (one for each wood type + two stripped ones + of course, bamboo one) 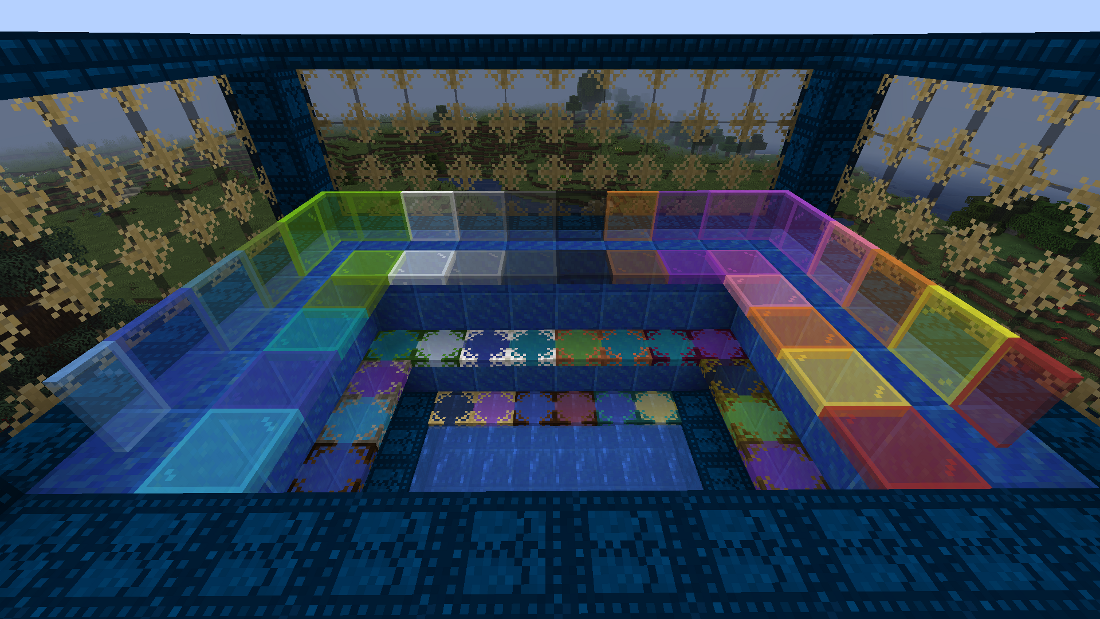 There are also new decorations, which will be extended much more in the future. For now though, we have lapis towers, representing Elven Lapis Tower, the home of all mages living in West of Moon Continent. They are decorations, but can be used as a stronger alternative for bookshelves, as shown below.

Finally, we also have new types of chests, which can be locked with key. So, noone except for people having key will be able to open it!

There are many subtle changes not mentioned here which you can also find useful (for example, chainmail armor being craftable). But for that I recommend reading the wiki... or finding it by yourself while playing!

In v0.a10 version (12v0.a2 for 1.12.2) there are introduced huge cross-mod integration/compatibility features, enabling mod creators to use Nether Avoider and Dismantle enchantment. For more information how you can use them in your mod, you can either use this guide or message me.
Compatibility details (such as mobs affected) can be found in mod's guide.

Wastelands of Baedoor is slowly coming to beta stage. I will make one more alpha version, v0.a11, polishing technical aspects, bugfixing and adding few details, maybe something more if I have time and feel right for it. Update will certainly fix firearms rendering and (a bit placeholder-y) small textures in 1.16 version. There's also a possibility that it will add support for some other versions, such as 1.14.4 and 1.17, but it depends on how many bugs I encounter (1.14) and on MCreator development (1.17). So no promises. 1.14 support, if ever, will be exclusive for v0.a11, I don't plan to support it further.
In the same time, I will try to port some things from WoB to its 1.12.2 version, at least to make that ported version worth using, at best to be as close to v0.a11 as it can be.

After all that jazz, we will enter the beta stage, where I will focus much more massively on steampunk theme. You can expect much more machines/automaton-related stuff, airships being more diverse, and possibly expanding the amount of firearms, to make them use more widely all mechanics involved. Of course farming and decorations/blocks won't be forgotten.

Aside of WoB, you can expect two standalone (yet integrated) expansions. They will most possibly be created, but its development depends on my free time, so I can't promise anything:

Survey for next updates

If you want to participate on my development more actively, you can join Discord!

Aside from most direct talk you can get with me, you will be able also to present ideas for wider audience, get non-public snapshots or archived, older versions of WoB, not published on CurseForge.

If you have older version of mod and you upgrade it, you can get "missing items" error. Don't worry, it's nothing to care about, it just makes projectiles or test items disappear. I don't delete any important feature since first public version, so these errors appears only if something was changed for performance/mod weight sake.

All rights reserved except for vanilla textures, which are obviously created by Mojang. Glowing obsidian is taken from old versions, and is a tribute for developers and early stage of game which I was able to be part of. Some other vanilla textures was used to create "extended vanilla" features, such as wood variants of blocks.
Some WoB elements were also made by friends of mine, so these are also under their own rights.

You can use WoB in your modpack freely! It's not required to mention any links, but of course it would be really nice addition :)

Port for 1.12.2 started 4th June 2021, and will try to add everything main version provides. Port development is separate, meaning versions will have different changelogs (but aiming for future parity as much as possible) and 1.12.2 version will rather use politics of small updates than huge ones. So, as 1.15/1.16 alpha versions will end on v0.a11, expect 1.12 port reaching much higher numbers.

Remember that since I'm single developer of this mod and I know Java pretty badly, porting it will be slow. You can expect third public release in July, but that date can change, even radically, depending on my coding progress and free time.

If you use MCreator 2020.2 and know Java, you can also help with its development (use feedback report or join Discord for that).

Thank you to amazing people on MCreator site, for being so wholesome community, and to Pylo of MCreator for letting me make this mod without a whole lot of coding knowledge.

I would especially want to thank:

Thanks a lot, and see you on airship! 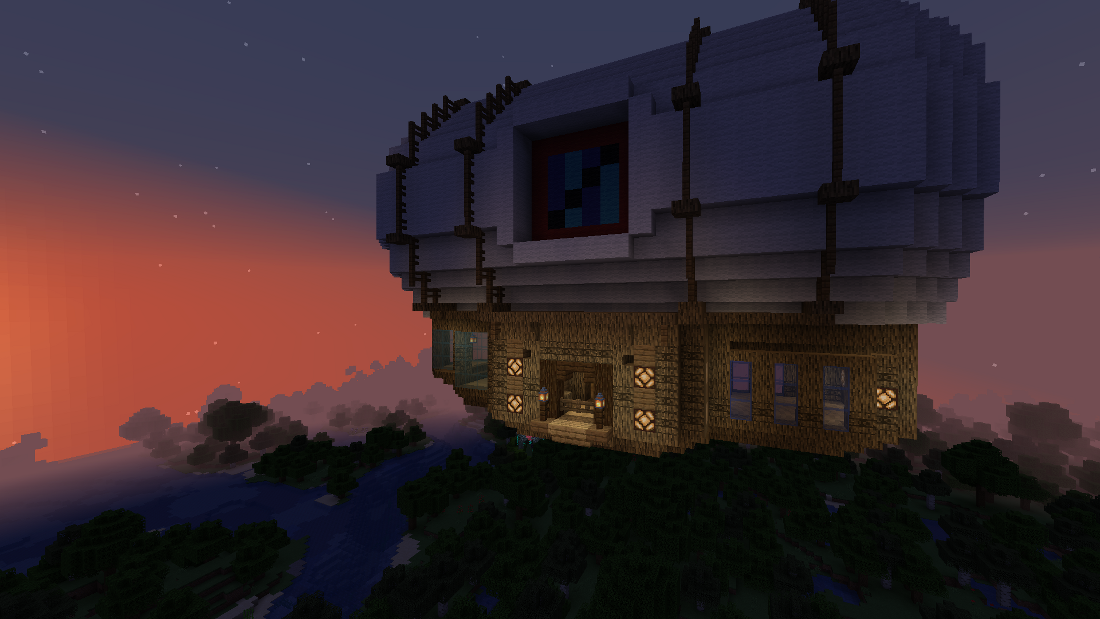 ~ 1.12.2 porting process and changelogs can be seen on CurseForge/Discord ~

More detailed statistics can be found on CurseForge changelog or wiki.

Awesome! it's finally here! You earned my upvote!

Thanks a lot for kind words, I hope you like it :) I just added updated version, which (I hope) changes much in previously difficult accessibility. So I recommend checking it out too!

Next time I play Minecraft, I'll play it with this mod. (;

I'd love to hear your feedback on it! ^^
By the way, just warning you if you downloaded first 1.16.4 file (title without "_0" at the end) - I messed up generators and file uploaded previously can be not working. Actual version should be fine, though.

Gotcha, thanks! I was going to play the 1.15 version, though.

I played it and it looks fun. I have some suggestions to make it better. It has a lot of potential!
-3D Models for Guns
-The Bandit should hold a gun in the model
-varied reloading time
Other than that this looks really promising

Thanks for the feedback! Glad you enjoyed it ^^
For the model case, I am total newbie in both modelling and coding, so it will take time until I can make what you suggested. But still, that's what I plan to develop somehow. For now I am struggling with nice diagonal textures, as it would make firearms better (as long as they are not models, at least).
And reloading times are varied! On wiki there are time differences listed, ranging from 25 ticks to even 100. Though maybe you mean having these times even more varied, or that shot delay & reload types make you feel it's no difference between them? Would be nice if you explain that more ^^

It just feels as if they reload at the same time

Also, I could make some 3D models for guns. Im not very good with models though XD

Okay, so if adding more guns in the future isn't going to solve the problem, I will try to make them diverse enough to feel. For now it can be misleading, because I wanted to show all types of reloading, haha. By the way, I guess it was you writing me answer on Google Docs, and I love your idea for the boss!
And about 3D models, you can try it if you want :D I'm open for contributions. With my time & skills at modelling, 3D guns will be at the earliest near v0.a11-12 x)

Works on new update are going smoothly, but I have one question for type of block I am not sure of. What do you all think about implementing new quasi-wood tier, being bamboo? Here there is an example of blocks' textures, as
a green temple (don't mind the monotony of colour, it's more if this wood fits overall feeling of the mod, or if it's out of place): https://i.pinimg.com/originals/29/6e/0a/296e0a77fb6b60240a7792e52527c886.png

I like the different wood variant. I think it would look great if one of your airships was made out of this wood.

Thanks for the feedback! I was thinking about airships exclusive for some biomes, so there's a chance I will make extra rare bamboo airship in jungle ^^