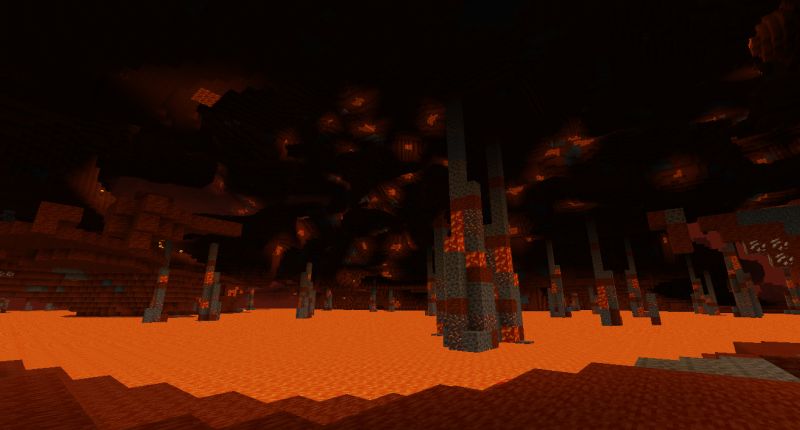 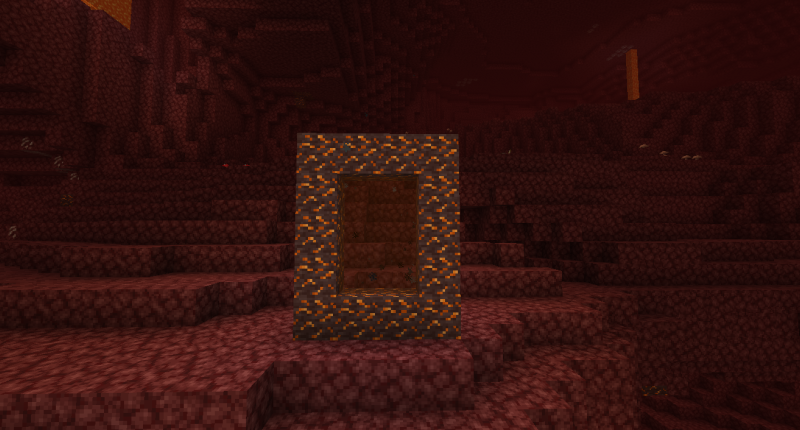 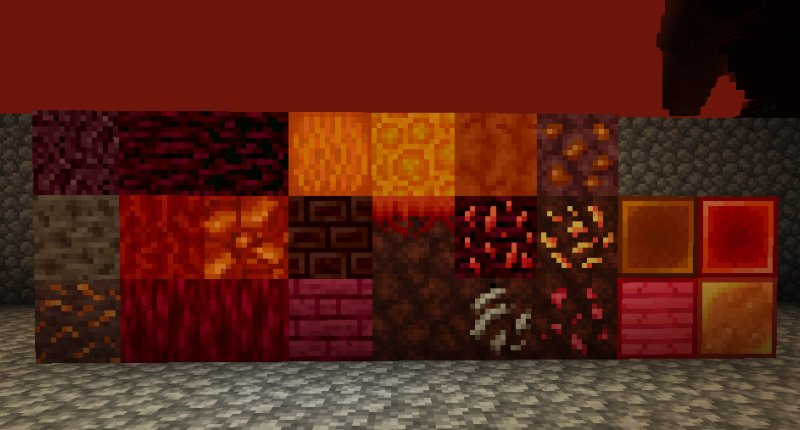 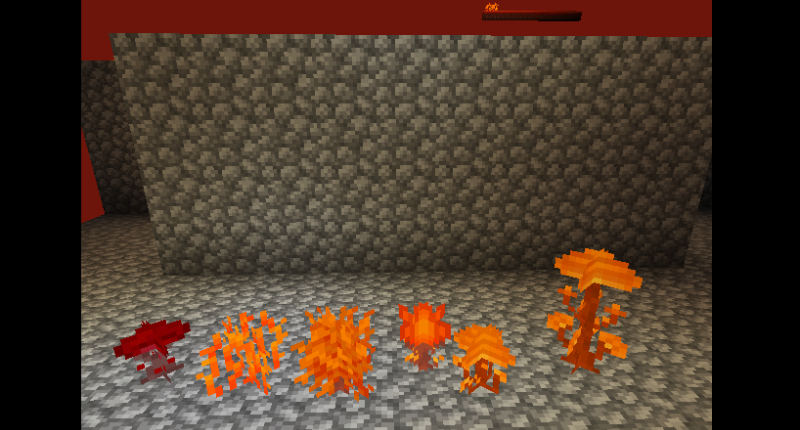 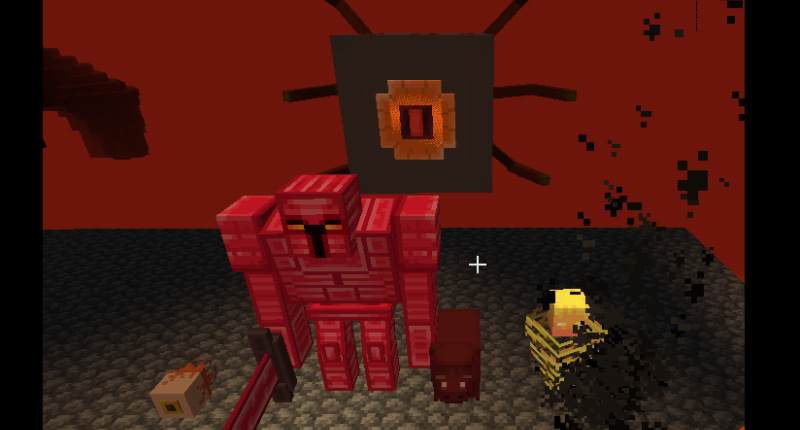 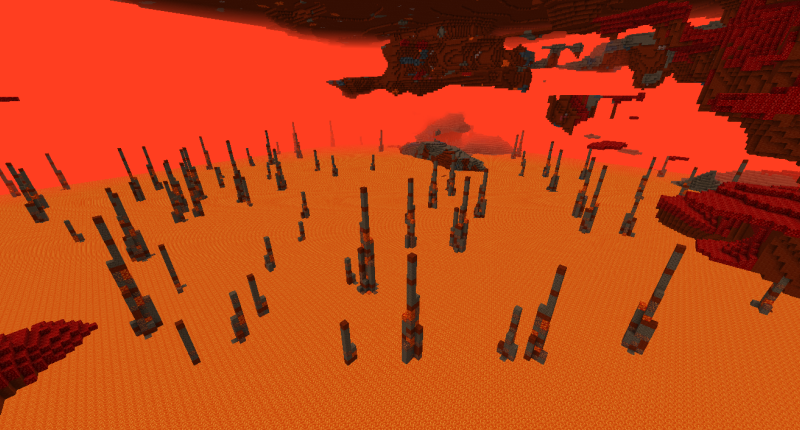 Spikes on a lava ocean

On the sultry Nether upon which your ardent desire for exploration has led you, your peripherals detect a strange ore with orange gems in it. Out of your desire for discovery and collection of things on all the adventures you embark on, you mine it with your half-durability iron pickaxe and keep it in your near-cluttered inventory. You called it "vulkatite".

As you continue your travels upon the nether, you see a strange broken frame of burning stone. Seeing that it's broken and incomplete, you keep track of the strange stone's appearance; after which you start to mine some more of that stone's kind in the vicinity until you had enough for fixing the broken thing. You remove the unnecessary blocks surrounding it and fix the rectangle shape it once had, using the newly acquired blocks you came to know as vulcanstone.

So you tried igniting it with your worn-out flint and steel, but nothing happened. Then you attempted to combine the vulkatite gem you mined with an ingot of iron to see if it'll be the appropriate tool to ignite the strange portal. You ignite the frame with it and are proven right. Before that, you started to think of what horrid surprises might await you on the deeper parts of the Nether, but without saying a word in your head you hastily enter the portal. But at least you're already prepared for the worst, right...?

Welcome to the Infernal Depths, crafter.

This is Upon Infernal Depths, a mod that adds a new hellish dimension, which is in a sense a deeper version of the Nether we all know and love, taking a few inspirations from the Nether Update itself. This time around, it's gonna be way tougher than the good ol' Nether we've always known. Do you dare to explore the most maddening of depths for greater power and reputation (and also for the fun of it), at the cost of your sanity?

IMPORTANT: I currently have a lot to do in online classes, so I hope you all understand if updates will come way later than expected.

Sorry for the late upload, I was really occupied w/ online classes for the last 2 weeks or so :/

Everything's calmer though, for now.

I'm planning to change the minimum supported version of this mod to 1.15.2, and considering reworking this mod by coding everything on my own starting June 2021.

Still no mod version updates this time (sorry if I excited you, haha), but I do have news about the current state of this mod's development.

Hi, I'm back again, and with a new snapshot version this time! The said snapshot, 210405b, is the first snapshot for a major upcoming update called "One Hell of An Update". (see what I did there?) Hope you enjoy!

(If there are some bugs I may have missed, feel free to tell me about it! I aim for this next major update to be as stable as possible, so feedback is very much appreciated.)

P.S.: Please don't ask me to backport this mod to old/obsolete versions, as I'm really focusing on newer ones. Thank you!

the dimension looks amazing, but the yellow color of the ground looks weird

yep, i see you don't really like the infernrack burnylium's texture. i'll find a way to retexture it so as to make it fit in. thx for downloading and trying the mod! :)

super cool. like a nether update but better because it adds a new dimension instead of adding on to an existing one.

thanks! that was exactly the idea I had in mind

That yellow grass block is a bit out of place though :P

It's still super good though :D
For some reason I automatically like anything that has glowing blocks in it :P

I see you finally got the mod into the alpha stage

that's right! in my case, I'm still waiting for that alpha/beta release of What Lurks Below, i just love Minecraft's oceans for some reason ;)

it's a good mod. I like it. and I think over time it can be a very good mod. only a few updates are missing.

this is only the beginning, so i'm thinking of making many cool (or should i say hot) updates eventually, and i'll stick to keeping it a good, balanced mod as well. thanks for sharing your thoughts!