Hello, MCreator community! Hope y'all are having a good day/afternoon/evening/night. I'm Sajevius (duh), and welcome to the official basic guide for my 1st mod, Upon Infernal Depths!

The version covered in this tutorial is snapshot 210410a.

First things first, your adventure will start in the Nether, so once you're decently equipped and ready for the dangers that lie ahead, head to the Nether.

There, you'll eventually come across some vulcanstone veins that look like this: 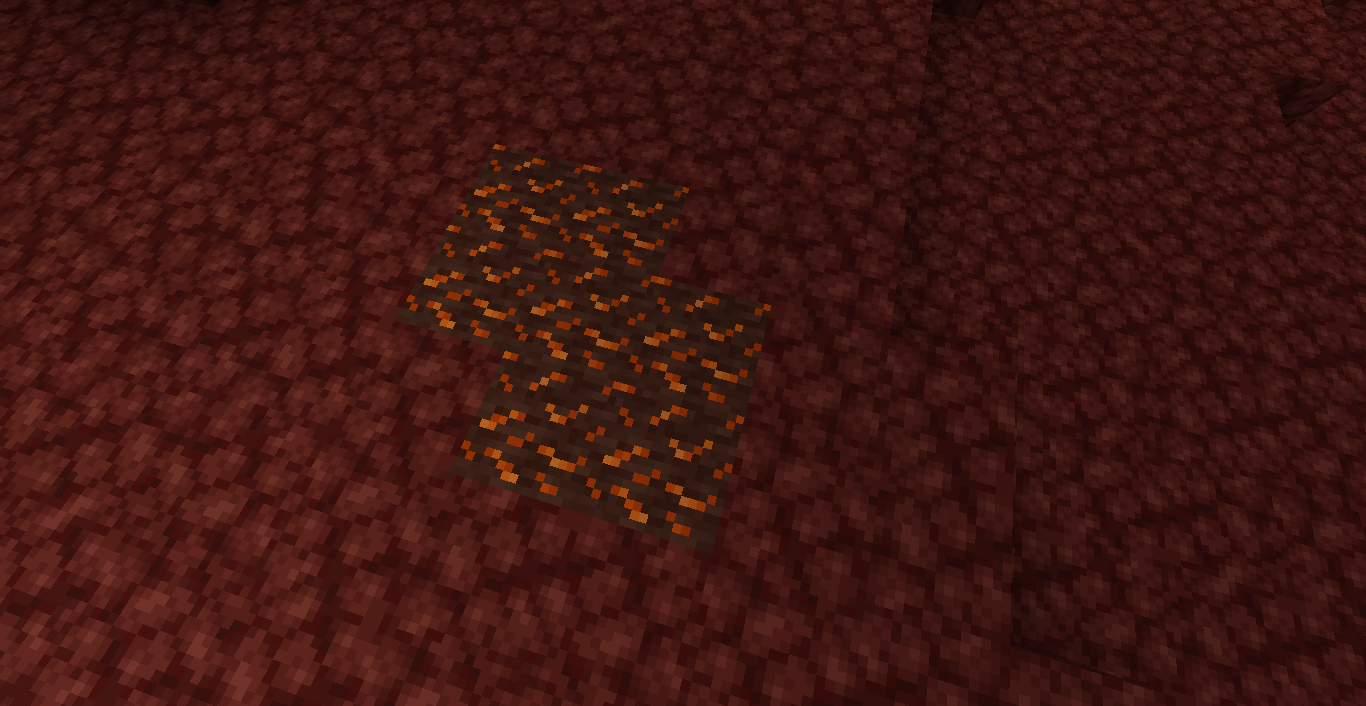 Mine a sufficient amount of them (at least 10), as we will be using them to make a portal frame leading to the Deep Inferno dimension in case we can't find a broken portal in the Nether. (They're super rare, and most of them probably even generate buried in the vast netherracks, but if you're lucky to find one exposed to air, they have a chance to contain a chest with loot!)

After that's done, let's look for some vulkatite ores. Go to the shores that meet lava oceans to search for them, as they'll only generate where there's lava nearby. Mine them with at least an iron pickaxe to get a vulkatite gem. They're pretty rare, but if going to the dimension is the only thing you want, you'll only need one at this point, as it is required to craft vulkatite and steel, the Deep Inferno portal's igniter. However, if you manage to find up to 30 vulkatites, you can craft vulkatite tools & armor, which have special abilities linked to fire (e.g. the tools burn enemies you hit while you're burning, and wearing a full armor set protects you from fire once you've lost 2 hearts, in exchange for durability), and it makes for a better tier than iron, being way more durable and even going as far as rivaling diamonds in damage dealt. So if you wish to survive in the fires of the Deep Inferno, I would recommend you to invest in a full set (or two) of vulkatite armor. 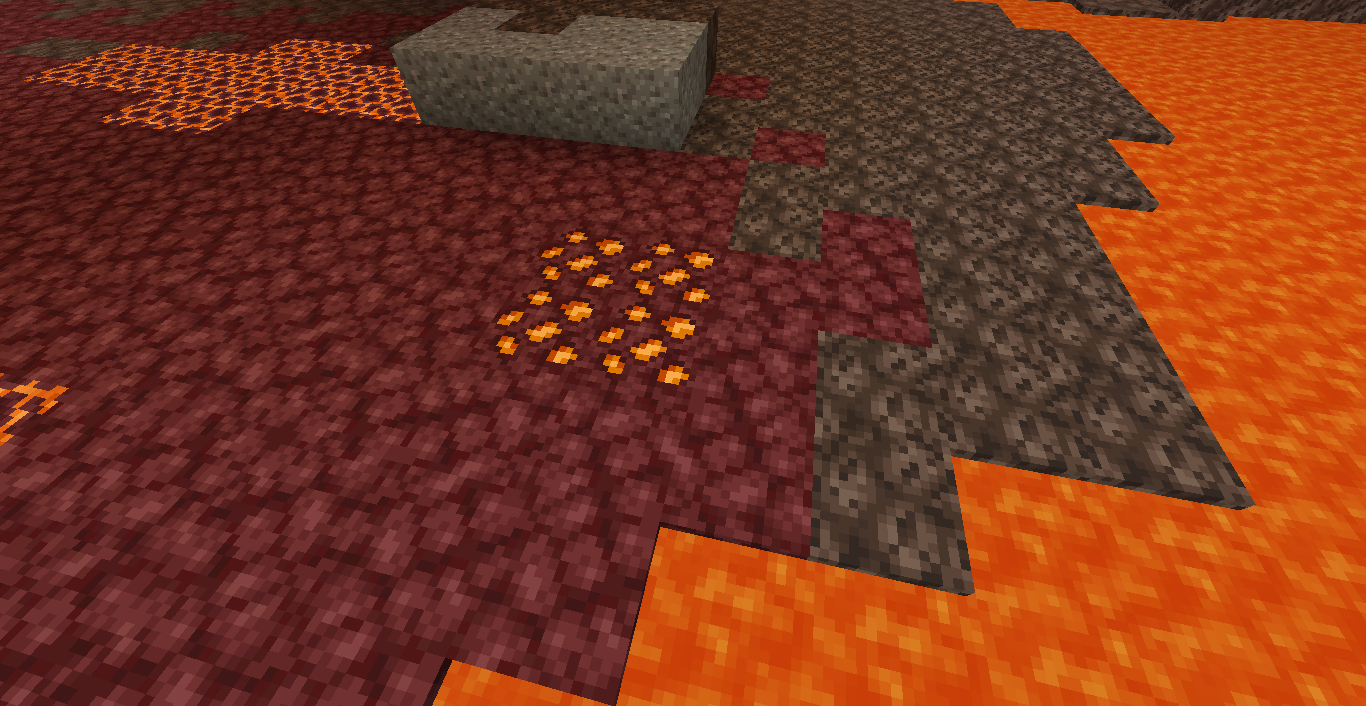 Those are the two things you need to accomplish before you can enter the new dimension. But remember this, too: you also need to be in the Nether (or Deep Inferno if you wanna return) dimension to successfully create and enter a portal; otherwise, it wouldn't work and you'll just waste vulkatite & steel's durability.

Anytime that you're ready to travel into the depths, create a portal frame from the vulcanstones, light it up with the vulkatite and steel, and witness the portal activate before you. Make sure to bring along plenty of light source blocks as well (night vision potions would be better to bring), as most of the biomes in the Deep Inferno are dimly lit and it's hard to make out the details of anything.

See you there, and hope you spawn in a good place!

For starters, there are currently 5 functional biomes, each of them having unique blocks, entities, and other features: 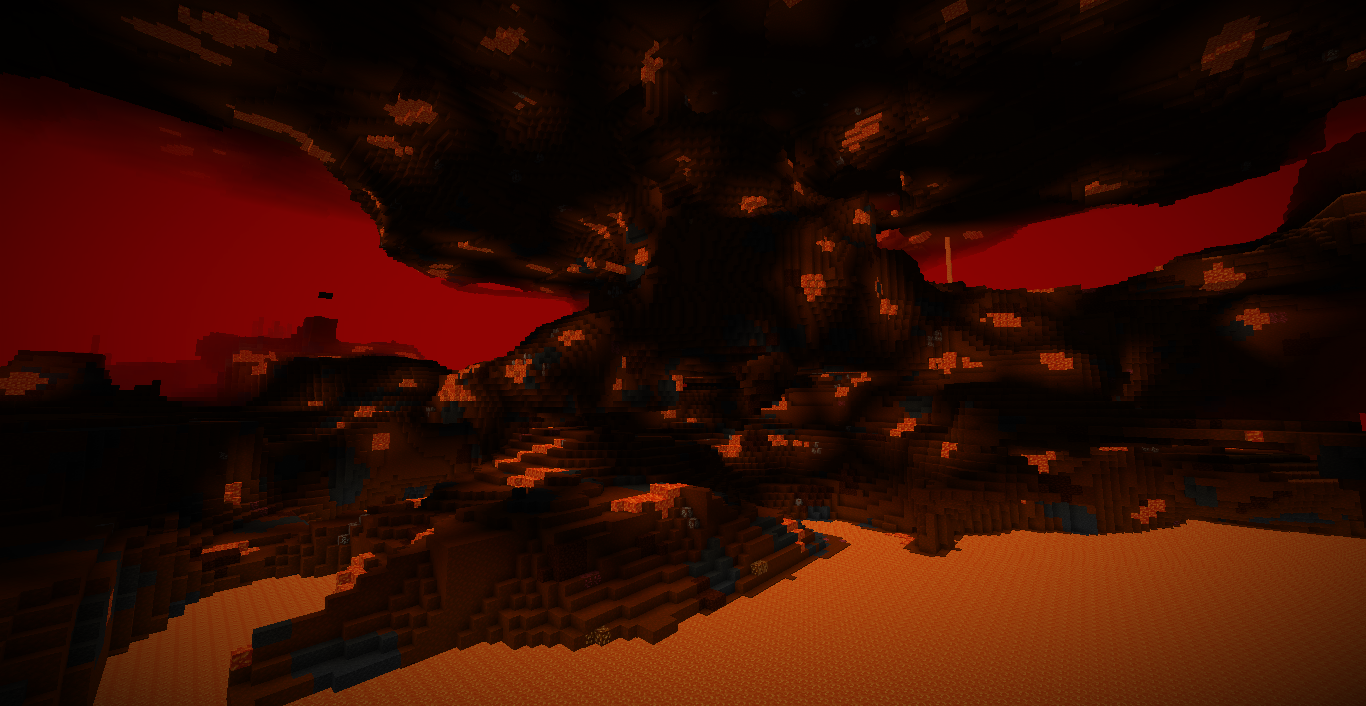 The Infernal Wastelands is the hottest and most common biome in the Deep Inferno. Zombie pigmen roam the grounds, while pyroculus fly in the dark red atmosphere, often staring at unwelcome visitors. Brimstone veins are present almost all around, and infernash can occasionally be found on the ground. Here, you can search for and mine three ores: infernrack quartz (still drops nether quartz), depthferrum, vulkatite, and pyrochitum. 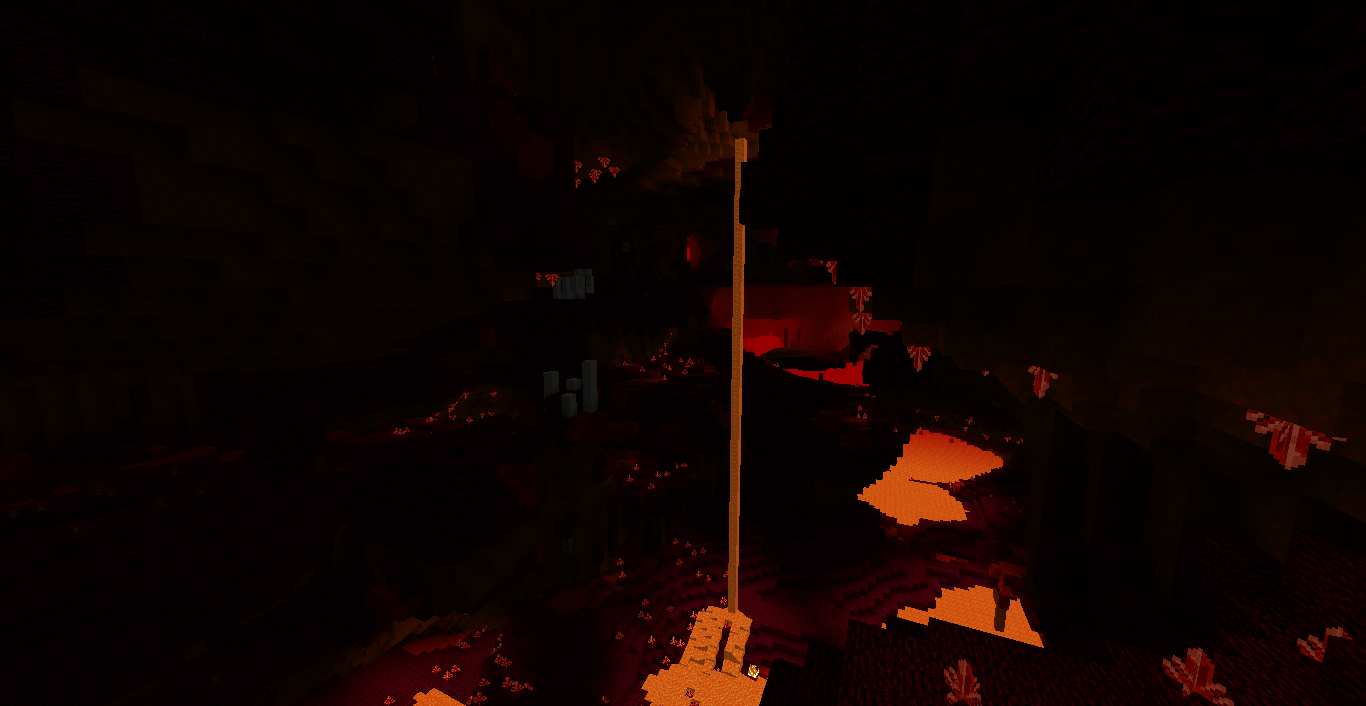 A dark place themed with blood, flesh, and anything else macabre, the Sanguine Grotto is one of the most spine-chillingly lonely biomes of the Deep Inferno. The stone here is called sanguistone, formed by the eventual piling of unimaginable horrors that transpired way before you. Here, one can find plenty of sanguicite clusters growing from both the ground and ceiling, which can be mined with an iron pickaxe and above. A few fossils, which are the remains of ancient colossal beasts, can also be found lying around. This isn't a place where you can survive on your own; this is a "grotto" (a.k.a. cave) after all. But if you wish, you can gather the flesh blocks from the ground, turn them into flesh strips, and eat them if you have the guts to do such thing. It wouldn't benefit you though, flesh strips are meant to be trash foods. 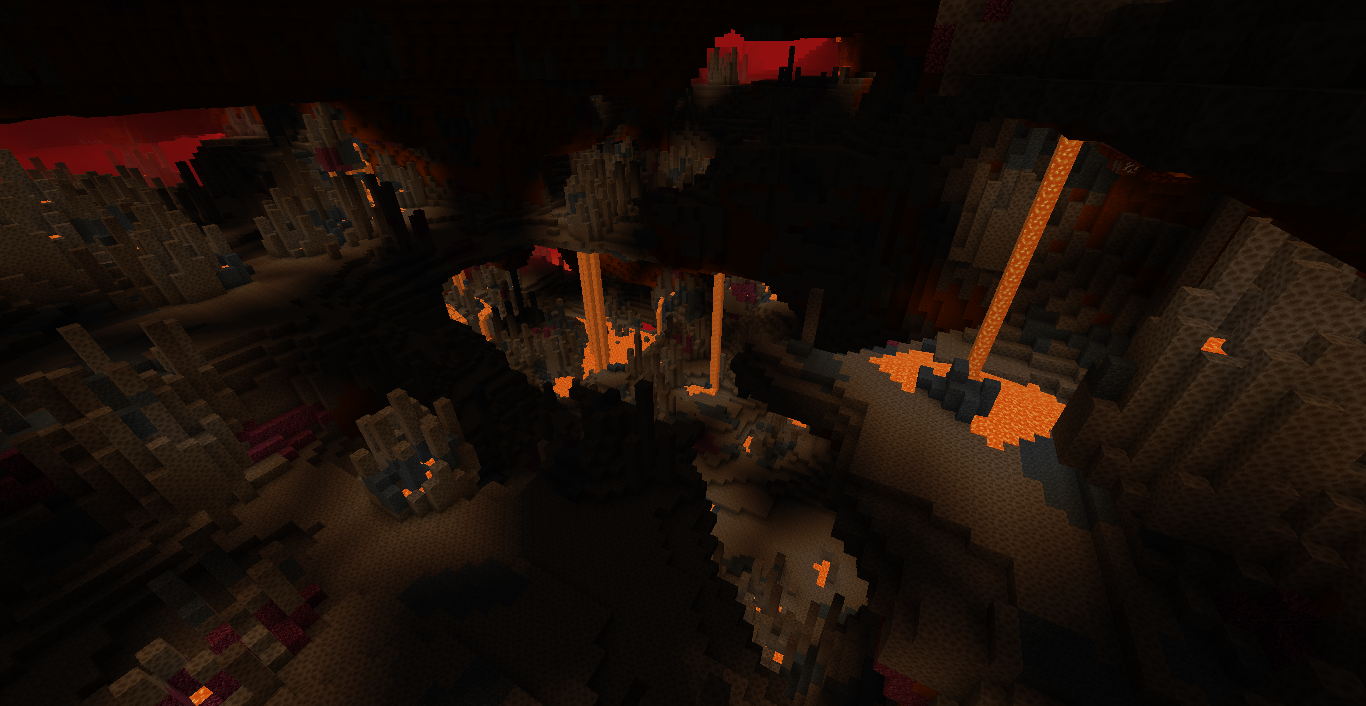 Volcanic in origin, the Cinder Barrens is, just as its name suggests, quite barren, with lava falls almost everywhere. Cinderstone forms the ground, and komatiite can also be found lying around. There's not much to say about this hot and boring biome for now. And I hope you didn't spawn here... 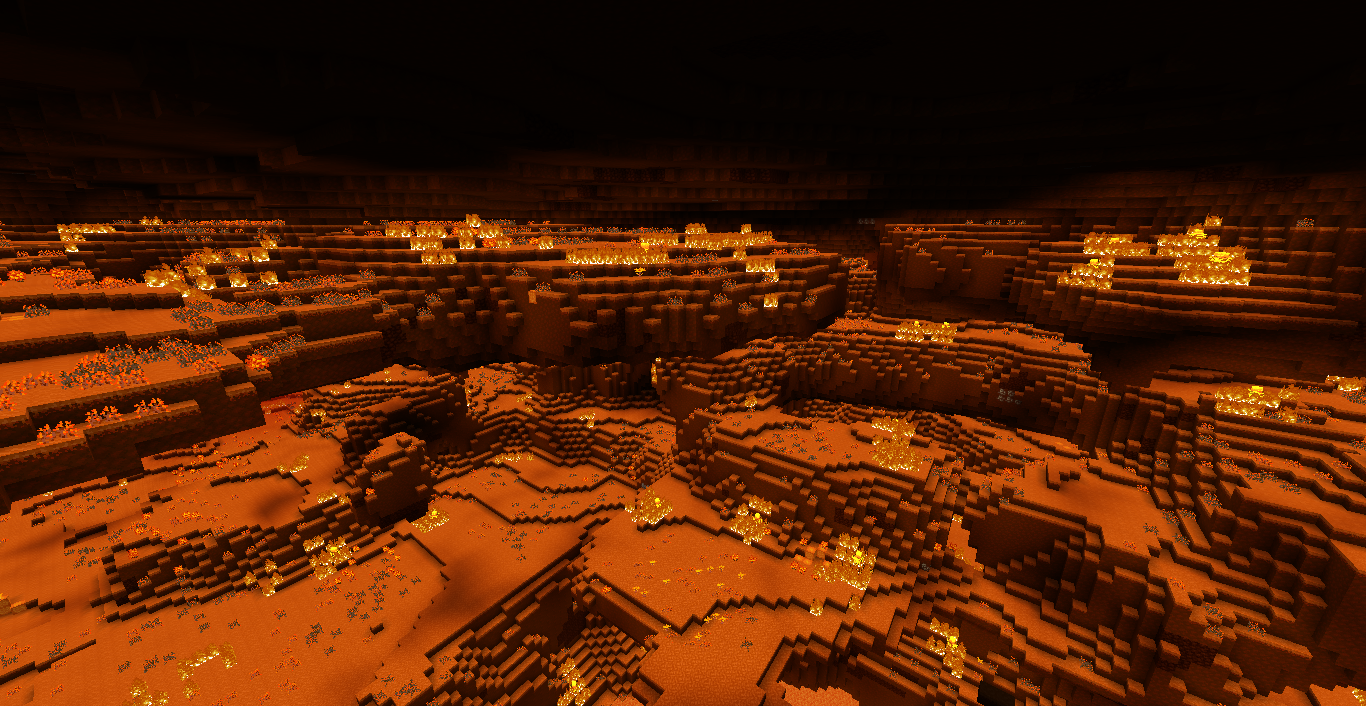 This biome isn't called the Burning Fields for nothing. Deadly burnstorms roam the area, setting the grounds on fire and seeking to engulf players in flames. This is a biome you should best avoid or at least be very careful and hasty around, lest you'll likely end up going up in flames. But for the daring, burnfruits, which are gourdlike fruits, grow here; you can gather them, turn them into slices & eat them if you wish for your stomach to burn (unless you have fire resistance). Fireberry bushes also grow here, which you can gather fireberries from, and as their name suggests, will set your insides on fire if eaten, too. 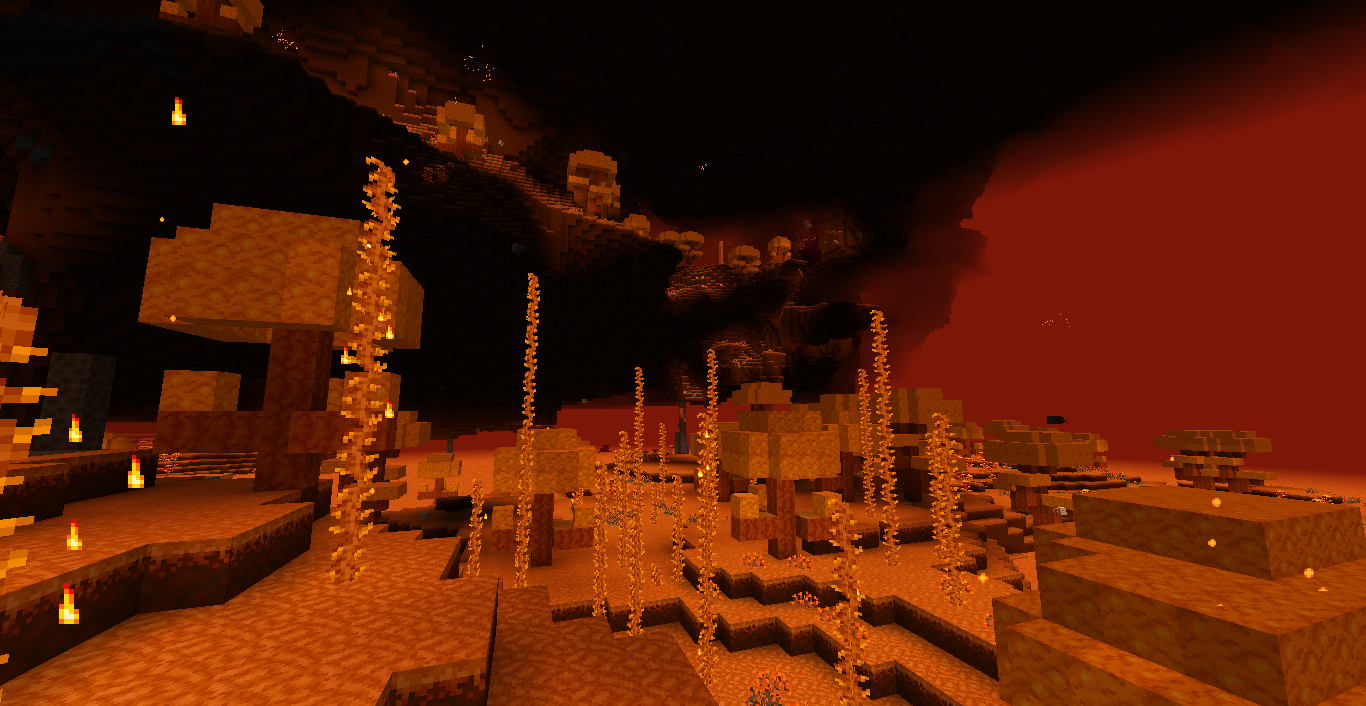 Warm and filled with quirky fungus life, the Burnshroom Forest is the only biome so far that's welcoming to newcomers (just like the Warped Forest from 1.16.) Tall flaming vines rise from the ground, while burnshrooms, flamesprouts, and flameroots grow in the burnylium. Small and adorable burning sporebugs commonly fly around large burnshrooms, enchanting the warm atmosphere. Burning glunguses, which can oftentimes dodge most projectiles shot at them, glide around these areas too. Here, you can gather fungus-like wood offered by the large burnshroooms that dot the landscape and gather burnshrooms to make a nice warm and delicious stew. You can live in peace here and build a house for yourself and your friends, knowing that the (not-so-threatening) glunguses are neutral mobs.

And moving on, here are some of the unique mobs exclusive to the Deep Inferno dimension: 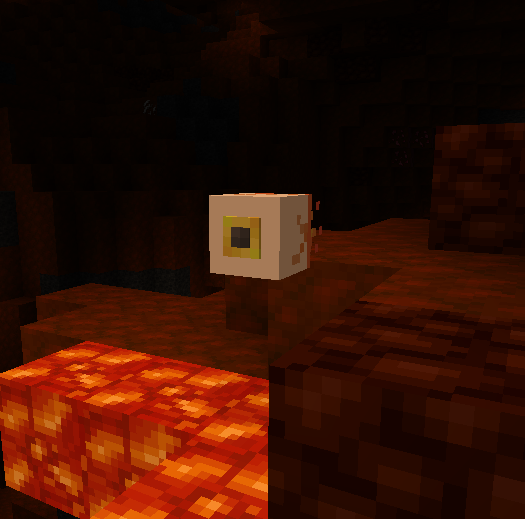 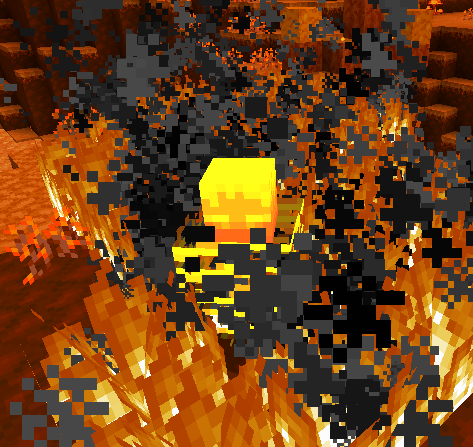 Special: Leaves a wide trail of fire on its steps; sets attacked entities on fire 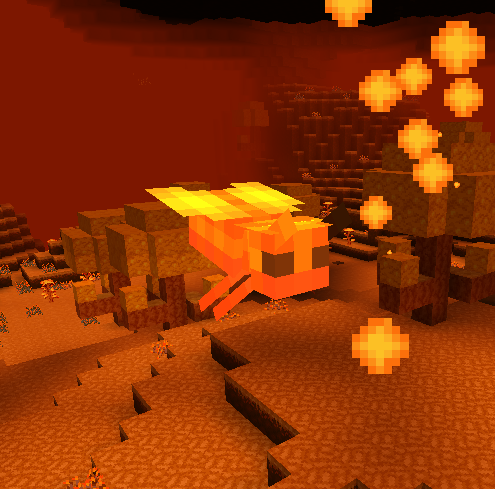 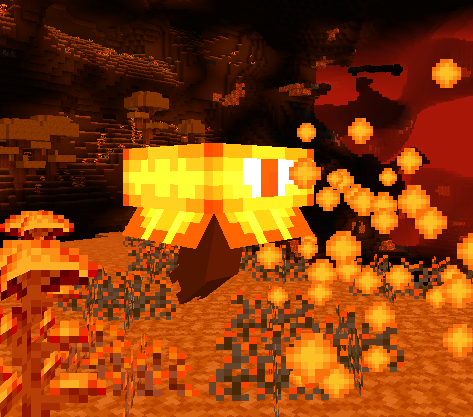 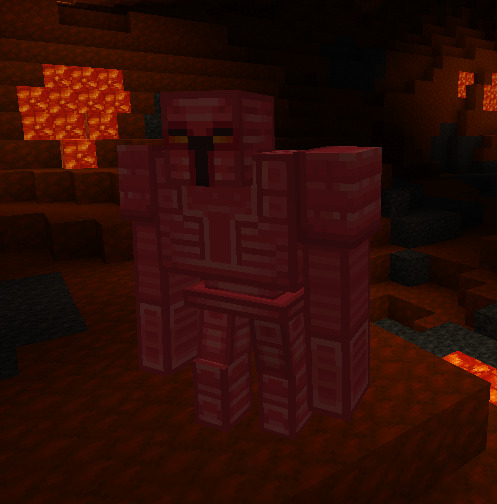 Habitat: None (player-created only) 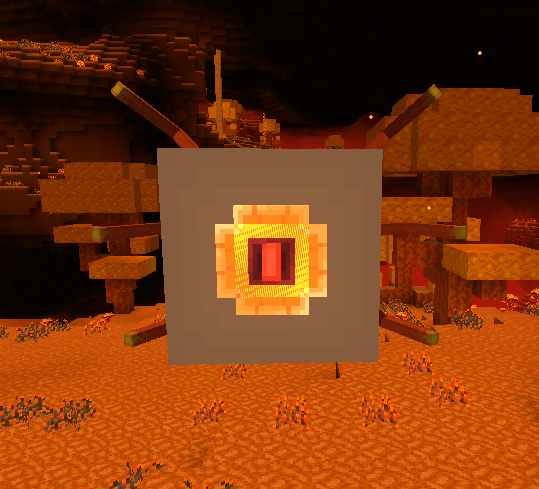 Special: Sometimes heals itself when an enemy is successfully shot; knocks players back on contact and deals substantial damage

How to summon: Craft an Ardent Lens using the following pattern:

NOTE: Ardent Lenses can only be used in the Deep Inferno, require the player to look at a spacious area, and have a cooldown of 3 minutes after a successful summon.

Following are the tool tiers added by the mod, ranked from highest to lowest:

At most, you're gonna want to get your hands on vulkatite tools and armor as soon as you have an iron pickaxe while travelling in the Nether; a full set is worth the search.

You may want to bring a diamond pickaxe if you want to mine pyrochitum ores.

If you're planning to start in the Deep Inferno:

That's pretty much it for now! Hope you like it!

Wanna share your thoughts? Alternatively, you can drop them at the mod's official forum topic: https://mcreator.net/forum/66818/upon-infernal-depths-mod-discussion

P.S. A more detailed PDF guidebook, or perhaps a publicly accessible Google Docs document for the mod, will be available sooner or later, that is, if I have adequate time to make and finish it. Also, golden rule to remember: don't mine the vulkatite and deep inferno ores near zombie pigmen.

Very nice quide for a very good mod. (I commented on the mod page as well) I see you've worked very hard on the models, particularly the Ardent Oculus and Burnstorm models. The biomes fit very well together too, I like the names you have for them. The flesh grotto giving me some serious Terraria crimson biome vibes doe