[TUTORIAL] How to Create a Vertical Movement Controller for Rideable Entities

As someone who loves experimenting with MCreator's procedures, I bring you guys a workaround for allowing your entities to move vertically, without writing any code whatsoever! Just in case you can't find any code help or are not good at coding and have been looking for help on this matter, you can follow this tutorial. This works well with flying mobs as far as I've tested, so here goes! 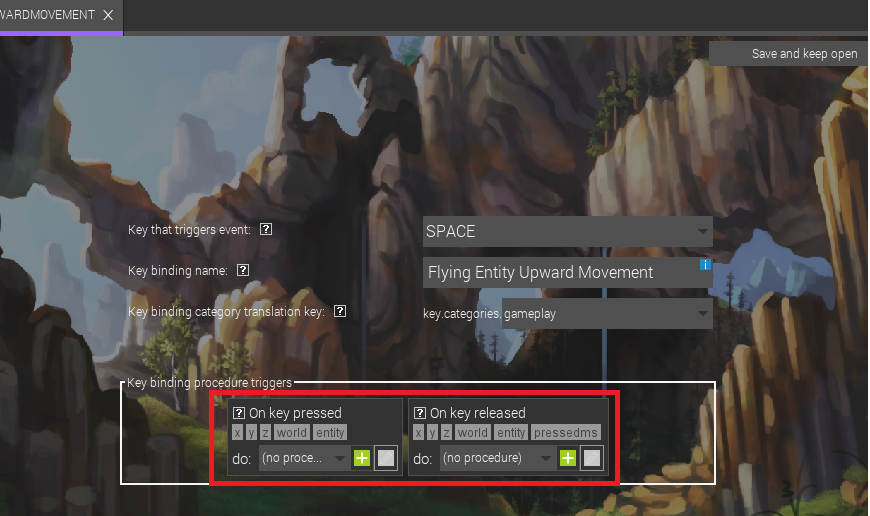 For allowing your entity to move upward 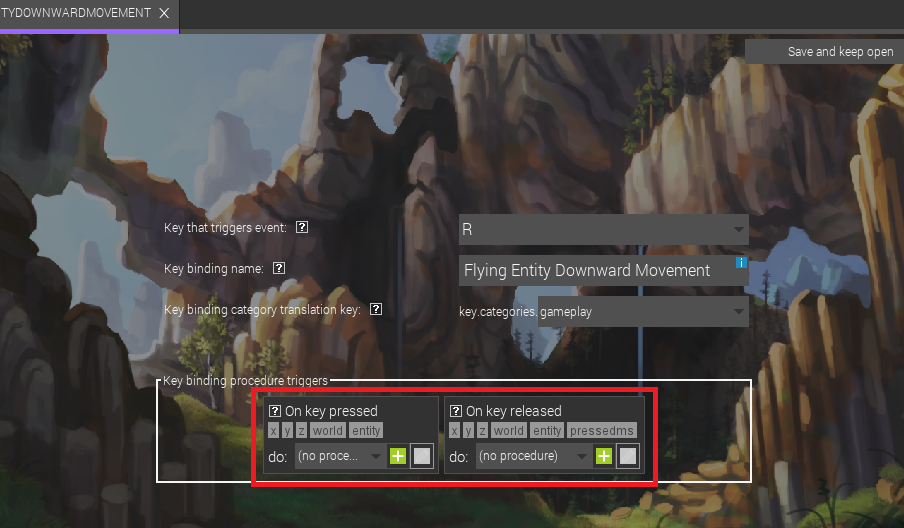 For allowing your entity to move downward

These key bindings, when used, will alter an NBT variable that will be utilized for our entity's vertical movement, which we'll talk about soon.

And here's how it starts. Hold on tight!

Go to the upward movement key bind (spacebar) and use its two triggers.

In its "On key pressed" trigger, make a procedure that checks if the entity being ridden by the player is a (sub)type of your flying entity. If true, then set an NBT tag with name "VerticalMovement" type "number" of the ridden entity to value of "1", which value would signify that the entity is currently flying up.

In its "On key released" trigger, make a procedure that also checks for the entity being ridden by the player. However, this procedure should set its aforementioned NBT tag "VerticalMovement" to "0" once you let go of spacebar.

Go to the downward movement key bind (R), and just like in the spacebar key bind, use its two triggers.

In its "On key pressed" trigger, make a procedure that... once again, checks the ridden entity's (sub)type. This time, set the "VerticalMovement" NBT tag to "-1", which would signify that the entity is flying down.

Here comes the best part: actually letting the entity fly up and down in response to the keybinds the player presses! This procedure is where the magic happens. And I promise, this is the last thing we'll do.

Go to your entity, go to its Triggers tab, and add an "On entity tick update" procedure.

Edit the procedure, and do this: 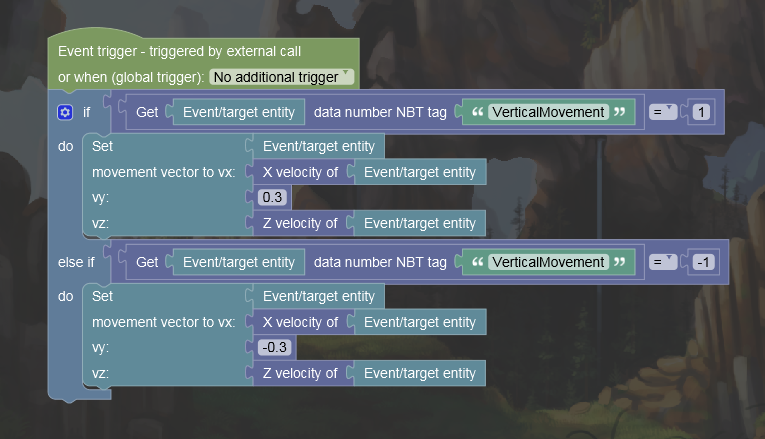 Now save it, build the workspace and run the client, test it in-game and see if it works!

That's pretty much it. I hope this tutorial helped you, and happy modding! :D

P.S. if there's anything wrong, if you have suggestions, or need further help, let me know in the replies!

let me explain. I just realized that I got some things wrong in this tutorial. like, since I basically created a global variable, that means just one player pressing "spacebar" or "R" will alter that variable, thus causing flying entities that are ridden by other players in a multiplayer scenario to also fly along with the one you're riding, even if they didn't tell theirs to fly XD

well, there's a good news tho. I found a way to fix this multiplayer problem using NBT tags, and I'll be redoing the wrong/inaccurate parts of this tutorial! stay tuned.

I was gonna say this but you beat me to it. Good tutorial anyway.

just updated the tutorial btw, so I believe the entire multiplayer problem is fixed. I should really be mindful of what things/procedures I use next time around...

Nice tutorial, I'm sure it will help some users :D

This is the same method I used for turning and accelerating in my mod, Nate's Cars (figured it out myself), although yours is even better because it sets the keybind directly to the nbt of the entity being ridden!

For anyone that wants to do this, it works perfectly in multiplayer, so no worries there!

Finally, I'd suggest the mob to only apply the movement it is being ridden, otherwise you can dismount while holding a key and the entity keeps going (easy fix, just a "Is (entity riding (event entity)) type PlayerEntity").

Where is the "set vector movement" block?

CyberTuttel, are you on 2021.1? if yes, I believe they've changed it to "attempt to override motion vector of [entity]" on that version, but it should still be under "entity management".

Got it, thank you

I have a question. In step 1, you have 2 photos on which there are 2 places to choose the procedure. Where can I find this in the latest version of mcreator?

makxspa, that's the "Keybind" mod element you saw, it contains 2 triggers for when a keybind is pressed and when it's released which you can check yourself. i made this tutorial for 2020.5 and now I'm on 2021.1, but it should still be there, perhaps even on the latest snapshot as I don't see a reason why they would remove it

I have one more question. Where in version 2021.1 is the block "Set Movement Vector to vx: vy: vz: " ? But if it's out of the question, is it possible to replace it with something else?

uh, have you read the replies in this topic? if yes, you'll know without having to ask me. try to read the 9th reply (the one before the reply that's on top of your first one) and you'll find out