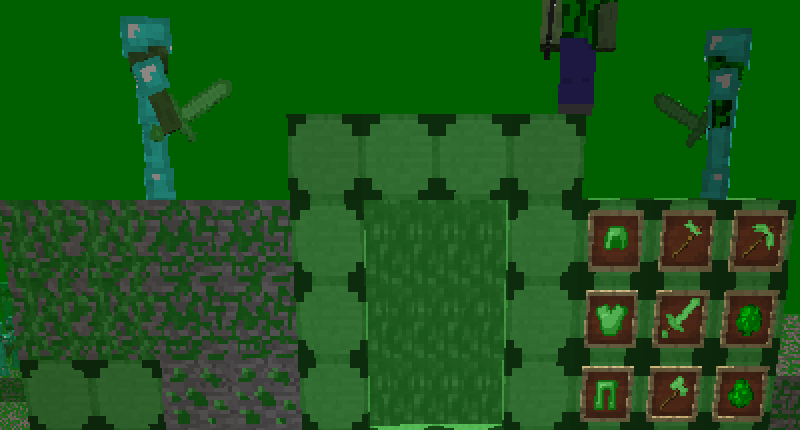 Scientist have done something awful to the world of minecraft. They preformed an expirement that birthed Pattanium, a new mineral/ore that spontanously appears throughout the enviroment. Even worse they have droped Pattanium bombs across the land turning some boimes into Pattanium biomes killing of all of the creatures and causing the water to turn green and only the strongest of enemies to survive. These crazy scientists (Lead by some evil Dr. T) have also discovered that this Pattanium could be turned into a block to make a portal into another dimension that is highly infected by Creepers, Pattanium Zombies, Pattanium Skeletons, and a few scientists (Villagers).  Pattanium Enemies offer a new challenge due to there numbers and strength. Pattanium Skeletons no longer offer range support as they now carry swords to destroy you with and are just as brutal as the Zombies. Think you have what it takes to rule the Pattanium Dimension, assuming you are brave enough to even get there?

This mod adds Pattanium Ore to the world that can be cooked into Ignots.

These Ignots can be used to make:

Also turn the 9 Ignots into a Pattanium Block to make a Portal or have a End Stone Strong Block.

Armor and Tools are made the same way.

Convert 9 Powder to get an Ignot (Powder is a drop from Pattanium Enemies).

Reports of bugs or Requests for this mod should be emailed to patrickdsly@gmail.com

@#1 No it was intended for the Villagers to spawn in the dimension :D Makes it a little more interesting

Great mod,thanks for creating it!

Very Nice mod, I love the dimension and the mobs

This is OP. Just OP.