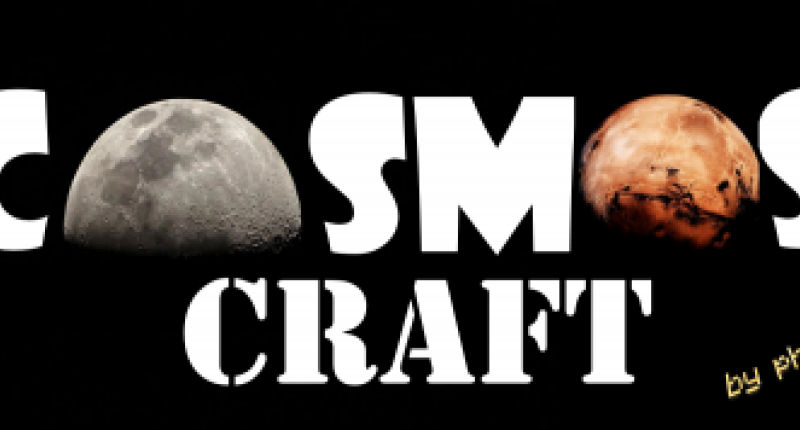 I couldn't fix a bug, and then my computer got broken and I lost everything of this mod. I lost my patience and then I got away from modding for a few months. I'm preparing to create the 2nd version of this mod. Thanks for your support, stay tuned for version 2.0 of Cosmos Craft. :)

Hiiiiiii Everyone!!! Im back with another cool mod!

And after the non-success mod JSMB (Just Some more bricks), I've made Cosmos Craft (that probably will be a success =P)! Now you can explore different planets!

Please use Not Enough Items for the recipes, because they're too much to put here. Thank you!

And remember, mods are made to be played, so download and play! And don't forget to comment, any suggestion or feedback is welcome! Just don't forget that the mod is on BETA, so report ANY kind of bugs. Thanks again!

To travel to the planets, you need to make the portals and the igniter. Each portal have it own igniter, so don't forget to check the recipes on NEI

All the portals: //prntscr.com/6idecj (note: on this picture, ceres portal was made using coal ore. As of Beta 1.1, is made of coal blocks)

NOTE: Venus dimension is very laggy (a bug, probably). Plz remember that the mod is on Beta, so it's normal to have bugs.

Moon is the natural satelite of the Earth. Portal to the Moon is made with stone. Moon Creepers and Moon Cows spawns here. Moon Cows drops Moon Beef that can be cooked. Moon Creepers only drop Gunpowder. Revive the Neil Armstrong moment and be the first minecrafter landing on the moon!

Sun It's our star. Blazes and Zombie Pigman spawns here. Portal is made with gold blocks (Very expensive !!!). You can put 4 sun rocks on the craft grid to make a gold nugget. Watch out with the lava!

Mercury is a planet with lots of iron. Iron everywhere. That's why the portal is made with Iron blocks. You can also smelt the mercury rock to get iron dust. But watch out with the mercury zombies, they will not leave you take their iron!! muahahahahahaha!!!!

NOTE: VENUS IS BUGGED, IT HAS LOTS OF LAG, SORRY. IF YOU CAN TO HELP, CHECK THIS POST: //mcreator.pylo.co/forum/11728/annoying-lag-problem

Mars. The Red planet. To get there, you need to make a portal out of Iron Infused Rocks (Check recipe on NEI). This planet is famous because of his red color, provenient from the ferric oxides of the rocks. You can smelt mars rock to get Iron dust. Mars its also famous for the myths about life on the planet. And those myths are true, at least on Cosmos Craft. Mars is habitated by Mars Chickens and Creepers. Creepers drop gunpowder, while chickens drop Chickens meat that can be cooked. Very rarely, chickens drop Iron Feathers, that can be used as ammo to the Iron Bow (a very powerful gun).

Ceres was the first asteroid discovered. Later it was classified as a dwarf planet. On this mod, its a land with lots of coal. Ceres silverfishes spawns here, and they drop coal.

Those are the Giant gas planets. On the real life, these planets have no solid surface. But on Cosmos Craft, they have (imagination has no limit :P). They don't have nothing special YET (they will have on the next updates).

Uranus (no it isn't made out of diamond blocks, it's just uranus rock):

Europa is one of the most curious moons on the solar system. It's a moon from Jupiter, and it hides a big myth. Cientists say that behind all the ice of the surface, it can be a liquid ocean, maybe with life. Humans are also planning to make expeditions to this planet. Want to be the first one arriving to this planet? (NOTE: It currently have nothing special. I will have LOTS of stuff on the next updates)

Pluto is the most known dwarf planet. Discovered in 1930, it was classified as a planet during 76 years, until 2006. Now it's angry and want to recover it's place next to the other planets. Watch out with the danger on this planet! (NOTE: currently don't have nothing special. It will have on an update).

Sedna is a recently discovered planet. It's very far from the sun. Nobody knows how it is, so in Cosmos Craft it's a completly new amazing planet with awesome landscapes. Currently it doesn't has mobs (But they will be added soon)

- Fixed the bug of Ceres generating an empty world.

- Ceres Silverfish has no AI

- Zombie pigmans spawns off the portals (This is a MCreator bug, not a bug from my mod)

On the next updates:

- Villages on (almost) all planets

- Better texture for the portals

- More mobs on the planets

- (?) Change the portal system to a machine that teleports you to the dimension (?)

This mod looks awesome! Just one idea: You maybe should make an interface GUI that lets you to teleport to these dimensions instead of making portals.

Maybe you should create a block that triggers the GUI When right-clicked?

@#3 But instead of make a block maybe I'll make an item, so we can get back to the overworld (nobody wants to be stuck at the moon, right? :P)

@#3.2 Good one! Though, If its going to be like a mobile teleporter, its gotta be quite expensive, right?

@#3.2.1 Yeah, sure. But I don't know how to make a GUI with buttons to teleport to the dimensions, do you know how I make that?

You should remove the sun or edit it, the sun is a big ball of gas, it's not solid

@#4 I know. Jupiter, saturn, uranus and neptune has no solid surface to but imagination has no limit :P