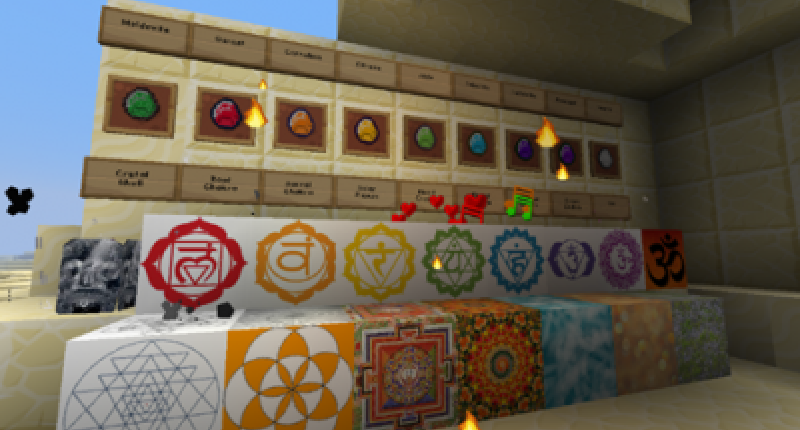 I searched for a while for a themed mod/modpack that catered for meditation and spiritualism.

as minecraft is a great sandbox platform I decided to make my own:

OmMod is my first mod. Other functionality to be added as I update. I haven't seen anything like this yet, and built it for my own use, hope others find it useful. may add meridians, crystal grids, sacred geometry, passive helper NPC's, meditation quotes, binaural beat and solfeggio frequency soundtracks, redstone connectivity etc later. I will add a video showcase at version 1.0. feel free to download and comment.

v 0.5 added playable finger cymbals and custom bookshelf with crystal guide for current gem items though TooManyItems2014_07_15_1.7.10_Forge doesn't seem to be playing nice with my custom GUIs at the moment. any ideas?

v.04 added crafting recipes for most items. Nested recipes structured for non-combat game progression (recipes images are in the zipfile), Can now mine Gemstones from randomly generated (be sure to create a new world) Crystal blocks  (Garnet, Carnelian, Citrene, Jade, Celestite, Amethyst, Lepidolite, Quartz and Moldavite) for crafting. *Caution* gathering mystic sage may invoke sacred geometry to summon a meteorite and bring you some moldavite ;) with useful positive high vibration potion effects when used. Randomly spawning Stone temples and Crystal skulls (no functionality as of yet). New particle FX. 10 new Achievements.

I havent seen anything like this before... I will try it out to see how it functions. I LOVE PEOPLE WHO ARE ORIGINAL!

thanks for the interest. im at the texturing phase ATM, so functionality will come later, recipes etc

@#3 I opened a new document in photoshop with dimensions 128x128 then scanned and resized the image to fit. then saved it out in PNG format with layers flattened. Pylo recommends 16x16 when importing, but 128 seems to work fine alongside the vanilla textures