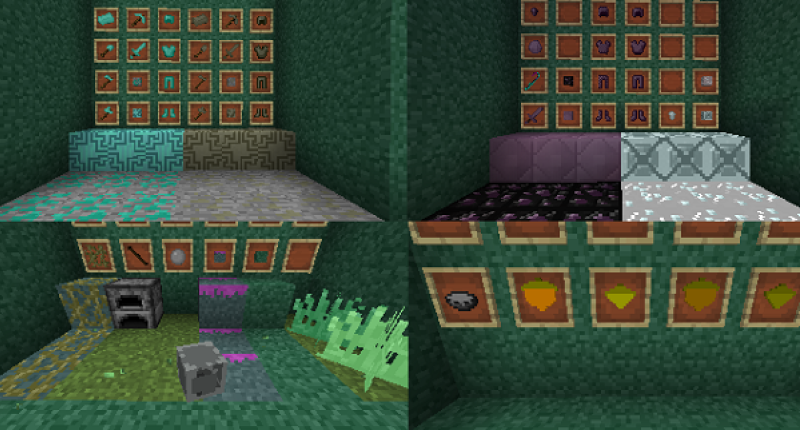 Hello, everyone. This is my first ever mod, though technically its a modpack. This is the Ashranite Mod, and it adds many new blocks, such as a lower than Iron metal, an enhanced Iron called Black Iron and several post diamond tier sets including the Mod namer, Ashranite! This modpack is very in developement, but all the blocks and items do render correctly when I tested them. The purpose of this Mod is to increase the amount there is to do in Minecraft. This Mod adds in items and blocks that I wish to see in Minecraft or have been suggested to add.

Mertrite, a metal between Stone and Iron. Comes with Ore, Ingot, Block, Armor and Toolset.

Ashranite, a gemstone that is post Diamond and will be the key to the not-yet-added Dimension, the Inferis! Ashranite comes in Ore, Shard, Gemstone, Block, Light Armor and Heavy Armor, Sword and a new tool, the Ashranite Scythe (Texture is a work in progress)!

Obsidian Rods, used in all post-diamond recipies. Made by smelting Obsidian.

New Mob, Liquid Mercury. This Slime variant is native to icy regions and drops Mercury Gel, which can be crafted with a bowl to make Mercury Broth (Broth restores hunger. Will eventually cause multiple status ailments, but for now does not.).

Covered Stone, a glowing rock found underground. These can be put into the crafting table to recieve Depth Vines, another fuel. The rock itself gives off a fair amount of light.

Infiris Dirt, the green dirt that Cursed Grass grows on top of. Native to Desolate Wastes, eventually will become solely an Inferis block.

New Mob, Slush, another frozen Slime. Slush drops Melting Ice that can be crafted into Soft Ice, that when touched transforms into a water source block.

New Mob, Infernal Bison, a red and black cow. Drops Beef and Tough Leather that can be crafted into a post Ashranite armor. Will eventually drop a new type of beef, Demonic Steak!

You will recieve an Achievement for discovering each of the new Overworld ores and for making their respected Ingot/Gem, however you must acquire them in order. Mertrite --> Black Iron --> Ashranite.

Added items and blocks that are only available in Creative mode:

Bloodsap Wood. A new type of wood that will become available in the Infiris. This wood requires the Ashranite Scythe to cut down, and can be crafted into Bloodsap Tools. Currently the most powerful Toolset added. Bloodsap Leaves are also added, and will eventually drop an item upon destruction, but so far do not.

Ancient Stone, Ancient Cobblestone, Ancient Stone Bricks, and Chiseled Ancient Stone. These blocks are the second part of the post Ashranite items that will be found in the not yet included Infiris Dimension. They can only be mined by Bloodsap Tools.

VI. Extreme ores in "The Infiris" (Requires "Ashranite" to cut wood, then 4 more ores in that Dimension, staggered like in Over World)). Ingots, blocks and related items. ("Demon Bone Spike", "Block of Souls", "Block of Armageddonite")

Loading this mod in Superflat is the best way. In Default World Type, the lag is incredible and more often than not the world will be unplayable. Superflat mode works best in the default Superflat type, however even Tunneler's Dream works, though may experience blocks not breaking after destruction or mobs not moving. These are temporary problems and will go away if you do not attempt to interact with them. This problem seems to be caused by the number of new blocks and items being added to the world, as all blocks and items work in default Superflat with no problems. UPDATE: This problem is mostly resolved by lowering the render distance to 8 or less.

Occassionally, Light Ashranite armor will not load its texture. Simply log out of the world and log back in.

The new ores spawn throughout the world. This is by fault of mcreator itself and not the mod. Mcreator's program has a bug that resets the maximum natural generation height. This will be fixed as soon as Mcreator is kills the bug. Mertrite is supposed to spawn in the upper half of the Surface world, Black Iron should have a max height half that of regular Iron, and Ashranite should not spawn above y ten.

As always, please report any issues to myself, Darkest_Mawile. You can reach me at my email address "delilah.cummins@gmail.com" to report problems with The Ashranite Mod or give advice or ideas for future updates. This Mod will recieve updates periodically to fix issues and add new content. As it is, the mod has taken me five days to get from cenception to this state.