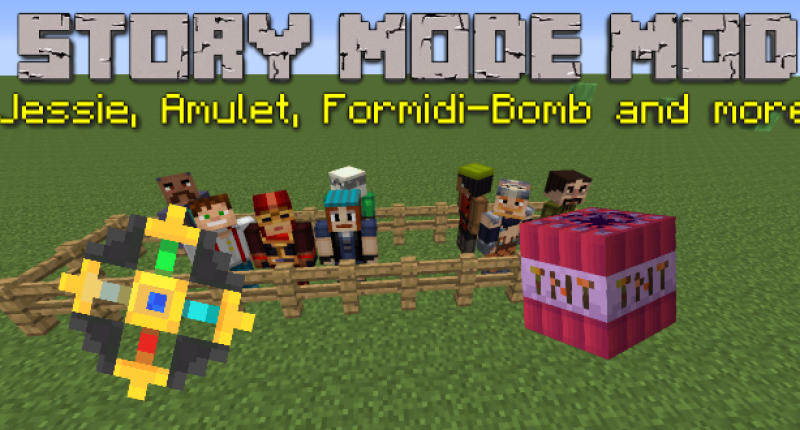 Do you know the game called Minecraft Story Mode? Good, because now it comes to minecraft as a mod!  This mod adds the main characters like: Jessie, Axel, Petra, Lukas, Olivia, Gabriel, Ellegard, Magnus, Soren and Ivor. It also adds some items and blocks like Formidi-Bomb, the weird Commandblock or Enderman suit. More comming soon :)

Fixed bug where when the command book wasn't disappearing after enchanting tools.

Now when you want to destroy the commandblock using ultimate tools you have to hit it 3 times, also it will be pushing you away.

Now all ultimate tools have 1561 durability

Added witherstorm block, this is what the witherstorm is made of. Currently you can get it only on creative.

Added CommandBook! (don't confuse with commandblock  [:)]  ) Craft it using a story mode command block 3 books and a nether star. Use a diamond sword on it to "enchant" it, after enchanting you can use it to destroy a command block, it also has pretty op damage

Added the black nether star! Now when you defeat the witherstorm it will drop this star

Now when you use a gold ingot on the amulet it will spawn "the new order of the stone" (jessie, petra, olivia, axel and rebuen of course)

Changed the creative tab for the armors

Ivor now deals 1 heart of damage instead of 1,5

Soren now drops carrot instead of nether star cause it was too op  [:)]

Improved the Guide, now it leads to the guide website instead of being bugged.

Added Witherstorm (WIP)! Craft the witherstorm spawner to summon it.

Replaced Gabriel's texture with one made by me

Fixed bug with Soren having 10 hp instead of 20

Fixed Ivor having 16 hp instead of 20

Added guide item, it shows the info about every item in this mod

Now you can place the Amulet on the ground

@#1 I wanted to add it, but I'd like to add the wither holding the command block too, but I can't find wither model anywhere

@kiriot22 how about u make it with PhotoShop Cs6?

@#2 You can make models for minecraft in Photoshop? 0_0

No offense, however the "teleportation brew" is actually an invisibility potion. Anyways, great mod.

@#3 what do u mean? it doesn't give me any invisibility effect, I tested it about 15 times before I released it same as everything

@#3.1 THEhippo72 sayed that Ivor didn't used a tp potion but an invisibility potion.

@Kiriot22 you can make WhiterStorm in Techne and importi it you can fid how to do here https://www.youtube.com/watch?v=XADFA5HJSWw

that means anyone can help

How did you make the TNT?