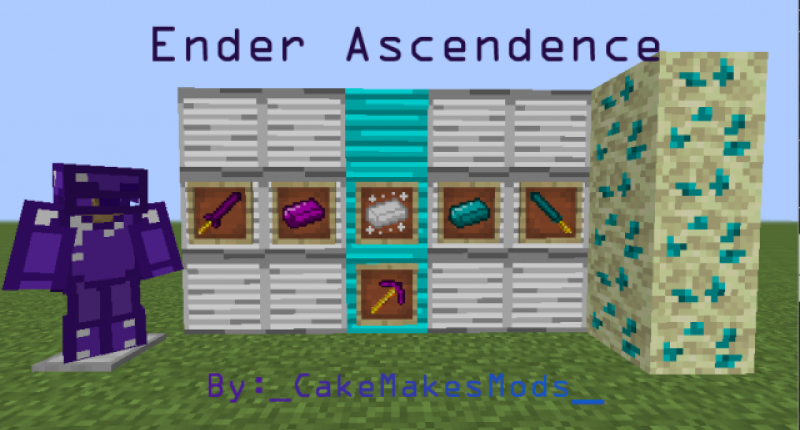 Hey, Its me, Cake. I wanted to tell you all that this mod is Cancelled, It was going nowhere and it was merely a test mod, It was Litteraly my first mod with MCreator. I want to thank you for the support you have given this mod, and i want to especially thank R3DSTON3_MAST3R for leaving a nice comment under here. I really didn't expect for such a well known modder to comment on my little mod, Thank you so much! And with that being said, see you untill i release my next mod. -Cake

Hey Everyone! This is my first mod. It is HEAVILY W.I.P But i did add some stuff that i think would be ready to release for now. It is FAR from done but school (DUN DUN DUN) is coming for me soon so i will have less time to work on this. Anyways Here it is.

First, The Story. Basically whats happening is TheEnd dimensions is LEAKING into the overworld. Causing Ender Steel to spawn.  Ender Steel can be found underground. This is what it looks like: This stuff can be cooked in a regular furnace. It gives you Ender Steel Ingots. They look like this: This Stuff is great. It is what you NEED to battle The end and stop it leaking. With this, you can make the Ender Blade. This is the recipe:

The Ender Blade does 19+ DAMAGE! and can 1 hit any passive and aggresive mob except the iron golem. HOWEVER! You can go one step further by super charging the ender steel and making the ultimate weapon. However, It'll cost ya. This is the recipe for Super Ender Steel:

You might be thinking to yourself: Woah Woah Woah! 2 NETHER STARS??!?! NO WAY! THATS TOO EXPENSIVE!... Yes, that is VERY expenisve, but considering the SUPER ENDER STEEL BLADE does a whopping 78+DAMAGE!!!! You miiiiight wanna rethink that.. Heres the recipe for the Super Ender Steel Blade:

Theres also ANOTHER thing you can Create with the Super Ender Steel... Well actually 2 other things.. Those being the SUPER ender steel Pickaxe and the SUPER Ender steel Armour! The armour is ridicilously OP as the helmet alone ALMOST fills up the whole armor bar. Heres how you craft the Armour.

That was the Armour.. Yeah your gonna have to kill ALOTT of Withers for that. Anyways heres the pickaxe.

Ok so thats the Super Ender Steel weapons. I Forgot to mention you can make a Decorative-for-now block. It is the Ender Steel block. It is litteraly crafted by filling up the crafting grid with Ender steel ingots, But i'll put up a picture anyways :3

Alright so thats that. Theres another item and block in the mod right now, As of NOW they have no use but in later versions they will be used to travel to another dimension. This is the Pure Ender Steel Ingot. It is crafted like this.

Ok so thats the Pure Ender Steel. With that you can create Pure ender steel blocks. Again, as of NOW they are purely decoravite but will have more uses in later versions and updates. You fill up the crafting table with Pure ender steel ingots and you get your block. Heres a picture.

Ok so thats it for Ender Ascendence mod. Obviously WAY more is going to be addded. As of now there is only this stuff. As you might have guessed, this is more of an End-Game mod but i tought it was fun none the less. Sorry if my english was bad. It is Not my main language.

Please do not claim this work for your own. It is down right rude and lazy.

If you make a mod review, Please tell me in the comments below.

Alright, thats it. See you in the next update! Ciao!

Very nice mod! I love the textures and the description!
However it's a bit unbalanced. I know that the recipes are quite expensive, but... Doing 20 damage makes you invincible against any mob and 80 damage simply makes you consider the Wither as a creeper while super ender steel armors turn every aggressive mob in a passive one...