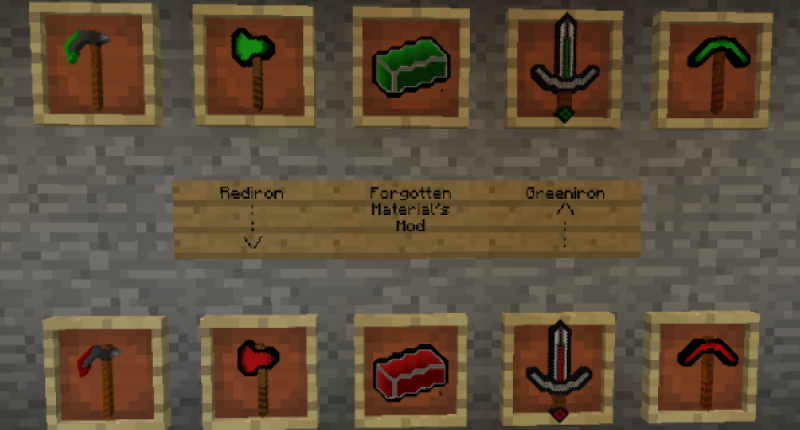 Forgotten Material's adds more of a use for items that were previously, viewed as, quite literary useless. As this is the very first release version of it, there are currently only 2 tool sets. The first is "Greeniron" the ingot required for making Greeniron tools is made out of an emerald surrounded by 4 iron which gives you 4 Greeniron Ingots. Greeniron tools have 4x the durability of iron tools, making them a sutible replacement for diamond tools should you be unable to get enough diamonds. Greeniron armour (planned/not yet added in) has various buffs for each piece of armour, a Greeniron chestplate gives you resistance 1 for example. while im still figuring out the basic plans for each im trying to make it worthwhile to make yet not unbalanced or overpowered. so once i add in the armors if you feel that any of them need to be nerfed/buffed. Say so in the comments and i'll see if i can make a poll so people can agree/disagree on it (majority rules), same thing if you'd like a tool nerfed/buffed. And as always any mod suggestions are welcome*.

*Except for bows, i'd already started making the textures for them but then realised mcreator doesn't have a bow feature yet. so until that's available bows are off the menu, although soon as they add bows i'll start making some.​

You only need to add more stuff.

"Create material themed mobs (for example: a "reaper" wielding a modified rediron hoe. as everyone i've shown this mod to says the hoe looks like something a murderer would use) - NI" you can use blockbench or other modelcreators to make models for mobs, maybe give the "reaper the ability to weaken attacked entities or to livesteal