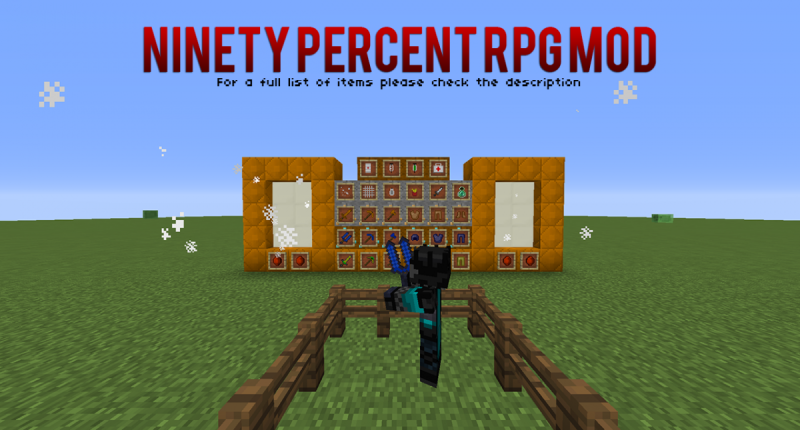 Over 100+ Downloads (There were more versions before, 7 in total.)
This mod was mod of the week in the Christmas Week, thanks you guyz :)
UPDATE : This mod is kinda discontinued, there will be future updated, for sure, but i want to move to another projects.. I ran out of ideas already. :| So, you may be wondering, what is this mod all about. This mod is about upgrading your gear and exploring new dimensions, along with defeating new mobs and finding new generated structured. This mod features over 70+ Mods and it's work in progress

In every spoiler i write what's new in every version, and since Release 2 i write my tought about the changes too.

- Yeah, i have a problem with miss spelling. Hope you guyz don't mind it :)

For the first crafting recipes, you will need end stone and eye of enders. If you don't have one of these, you can craft them :)

There are End Tools and End Armor. End armor is a little big better than diamond armor, and the end tools can be compared to efficenty 2 diamond tools (respectivly, sharpness 3 diamond sword).

The armor recipe is the same as vanilla, but you use End Ingots.

Do you have troubles finding that gold or mining that endstone? Why don't you make a miner's elixir. It's not very expensive, and it gives you Haste II for 200 Seconds (1:40 Minutes) (You can drink this only when you are hungry)

Are you an adventurer and you need help in your adventures? Why don't you bring some medkits with you :)?

Build 2
"Things are getting random"

The first feature that this version features is a structure.. It generates only in forests and you can find many treasures ;). This is how it looks like. This version adds two more ores to overworld. The first one is Rilmite Ore, which will give you 2 Rilmite fragments when breaked. You can make gems with them, then you can make armor and tools (Crafting recipe same as vanilla)

.
If you want to explore caves, i recommend crafting a Glowstone O'Helmet.

It uses the rilmite helmet for this. Sorry for that black pixel, next version will fix this, i promise!

The second ore is Salt Ore. This ore will give you salt.
You can also craft salt, but you need Water and an Water Filter.

You will have to place this salt in a bottle :{.

With Bottle O' Salt you can craft French Fries, but first you need a "box" for them.

, and you also need a knife to cut the potatoes

. If you got one cooked potato, one knife, one Bottle O' Salt and one french fries box, you can make french fries (it gives you 10 hunger points, like rabbit stew.

. Of course, you don't need all the salt to make just some french fries. When you craft french fires, you get "Half Bottle O'Salt". You can put some salt and make a full Bottle O' Salt

This was the update, the rilmite tools are very good for their price, and colect many rilmite gems, the next version will include a new dimension ;)

Do you want to explore a new dimension? It's time for Rilmite Dimension!

. Pretty Cheap if you ask me. You will have to do a portal frame (Like the nether one), then ignite it with an Red Rilmite Gem.

. I suggest crafting two of them, you will know exactly why soon.
When you enter the dimension, there will be Rilmite Stone and some Azurite Ores. You break them and they give you only one Azurite Fragments.

. For what is this thing usefull? You can make tools and armor with it, and it will help you summon the Boss.

(The Light Blue that you see is Azurite Gem, but the texture for it got some changes)

This update adds the first boss, called "Blue Lord" - This boss has an Azurite Sword and throws it at the player..It doesn't deal that much damage but Blue Lord has 100 Health ,it will be quite challanging ;).

- This is the Blue Lord Eye. You use it to summon the Boss.
This is what this update includes, i will submit this mod to Mod of The Week, maybe i have some luck :)

I hope you have an amazing day :).

Build 4
"Well i think i messed up with my MCR"

This mod adds a new dimension, a new ore, new armor and tools and a unexpected think
For the dimension you will have to create a Portal Frame (5x4) and you will use an Azurite Bar to light it up

In this dimension you will find Drivite Ores. They are better than Azurite, but they are not tottaly overpowered

- This is how you craft the sword
The Pickaxe, The Axe and the armor have the same recipe as vanilla minecraft.

This is the most unexpected thing in all the world. So, you know that this mod is called Ninety Percent RPG Mod, this is not a fully RPG Mod :P
Before scrolling down
i want you
to think
what will be
the
unexpected
thing
pls
don't scroll that
before
you think that
-
-
-
-
-
-
-
-
-

And i want to tell you something very important. I will release Magic Mod soon, in January.

For short : This update implements 25% of my magic mod, which is a scraped mod.
This update adds a ton of new things, the first being Nitherite Ingot

You will make tools of Nitherite using shadowed bars.

- This pick is just overpowered. I made it overpowered beacuse the next dimension which will come in the next update will have resistance 30 blocks..Good luck breaking these!

Do you remember the Pocket Command Block from the last update? It's a powerful item. But you can make a more powerful item with it. The Magic Keeper.

- This keeps 21 Runes inside of it. Right click to get a rune.

- The items near the Azurite Gem are Runes ;)
All staffs and all future magic things will use mana. You can craft mana with this recipe

When you got some mana, it's time to create some magic staffs.

- This is the Staff Base

- The Lighting Staff. Right click on a block to summon a lighthing for a Mana. That's really cheap if you ask me.

- The Staff of Levitation. It gives you levitation for 4 seconds and invincibility for 5 seconds for a Mana. Can be usefull

- The Staff of Healing. It gives you regeneration 3 for 3 seconds for one Mana. Underrated
A new dimension will come soon, if you have an idea be sure to leave that in the comment section!

Release 2
"Bug Fixes over everything"

"The bug fix was needed, bvut the buff and the nerf were kinda needed. I don't want players abuse those staffs for their cheap price" - IuStrenght"
Staff of Levitation and Staff of Healing - Solved a bug where you had to rightclick on a block to get the effect rather than in air. The Staff of Levitation was also buffed (One more second of invincibility), and the Staff of Healing now gives you only 3 seconds of regeneration.

"Just giving a little reward, you know ;)"
Blue Lord - Now drops Drivite as a normal drop and Nitherite as an uncomon drop

his version added : One new dimension, one new boss (An Wizard), One new OP Pickaxe, One new OP SWORD and some bug fixes writen up there.
To get to the new dimension you will have to make some Nitherite Blocks (10), them make a portal frame like the nether one, then ignite it with a Shadowed Bar MK2

- This is the infused pearl. It stores 50 Runes for you
I said this mod adds a new boss . To spawn the boss you will need an Wizard's Eye

"Rilmite is very expensive if you ask me, and his rarity is big, so why don't increase the drop of the fragments?
Not really a bugfix, but i buffed the Rilmite ore to drop 5 Fragments, soon we will get rid of those. BTW

- This is the Nuclear Coal. It's four times better than a normal coal.(The Stabilized Uranium texture is almost identic with the Nithril texture)
"I think is the time to add two more staffs"
I added two more staffs, the Staff of Combat which gives you strenght for mana, and the Nuclear Staff, which makes an explosion when you right click a block. Sweet
To craft them you will have to find Saphrite Ores (They are blue mysthical ores). They will drop Saphirite Powder

- The Staff of Combat

- The Nuclear Staff
"An overpowered Ingot, with overpowered tools. What a briliant idea!"

- This is the Nithrivite ingot.

- This is the most efficient Pickaxe that you can have, with infinite durability!

And oh, i almost forgot, the TNT Thrower, which uses TNT as ammo

Why do you rate it with 1 star if you didn't even downloaded the mod? Lol

A great mod! P.S. When you are making random stuff, add a infinidiamond block that is super expensive, like 4 beacons 1 dragon egg and bedrock in corners (can be crafted using 9 compressed obsidians, which are crafted with 9 obsidians) or something else that is expensive.

And add that recipe for bedrock anyways please

Also an item that when you rightclick a block it breaks, gives you drop and takes the item(could be called mining essence)

Thanks you for the ideas.. I think i will never implement that mining essence but i will think so.

Now you got French Fries.. The new version "Build 2" is out !

When I saw the mod image, I was saying "what a bad mod" but after reading the desciption I can only say "what a cool mod". Can I take inspiration from this mod?

The Boss Update is coming. Two new bosses will be introduced! And new ores + Some bonuses

This is a cool looking mod. You should update the cover photo then submit for mod of the week. I think you have a good chance at getting it.

@#8 Thanks you really much xXMCXx, i will change the cover soon, but i don't plan on getting Mob of the Week that soon, i want to make some more updates :)

Done, i Updated the cover, i updated the mod :)..All shoud be working nicely.

What do you want to be released in the Build 5 Update guyz?

The new version is out. It's a huge update so be sure to check that out. If you have any questions please feel free to ask them. This mod adds over 70 items to your world (Including the test and "easter eggs" one which will probably never be used)
So, magic mod is scraped, but why? Here's the reason - I don't have time to work on two separate big mods. I'm sorry

Just a quick update for you : The next update will make the rilmite ore drop mode fragments, or scrap the idea of fragments, don't really know.. But for now the Rilmtie gems are very expensive for an early game item. Pease tell me what you guyz think