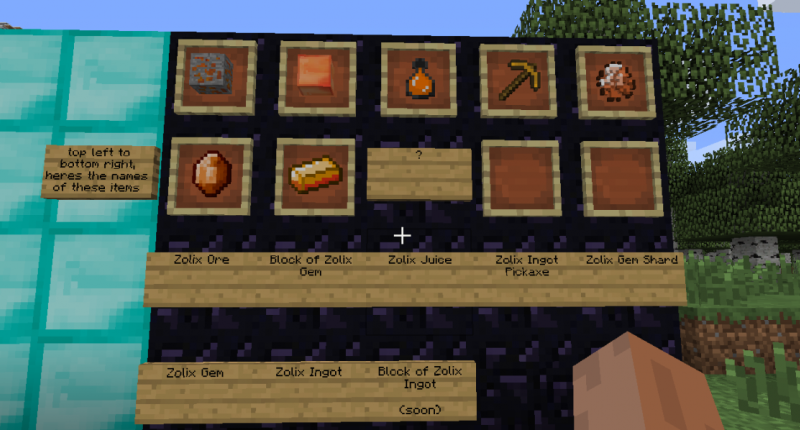 These are the materials on version 0.0.1d

This mod adds new tools and items to the game, like a drink or some bulding blocks. As of now there is only a few items, but more are on the way. So far I have the textures made, but there are some minor issues I have to fix before every version is finished. That's why theres only a few items at a time for a while. Only recommended alphas are public, but ALL betas are public. Oh right! Take a look at the versions so far...

0.0.1a - Pre-Alpha - Zolix Ore, which requires a diamond pickaxe to break.

0.0.1c - Pre-Alpha - Zolix Ingot, surround a Zolix Gem with gold. You cannot undo this for right now. Zolix Juice is drinkable and gives you strength, heals your hunger fully, but the cost is one heart of damage. There is also the first tool, the Zolix Ingot Pickaxe. Can mine obsidian faster, even faster with Efficiency V (5), and is very enchantable. Zolix Ore is less rare (it was way too hard to get).

0.0.2a - Pre-Alpha - Zolix Chest, the rest of the tools and their gem counterparts, Zolix Gem and Ingot armor, and a new biome.

0.0.2b - Pre-Alpha - Infused Coal, Zolix Bow, Infused Coal Block ,and 'Demise'. Demise is a great combo tool, which combines a bow (infinite ammo), a pickaxe, and a sword all in one. It has insane damage and range. As soon as you craft it, you are invincible for 30 seconds.

0.0.3a - Alpha - A lot of stuff including furnace fuel and storage units.

I have started resource pack support on Vattic's Faithful, so be expecting it in Beta. Leave suggestions for new items (not tools and armor, I already have those in mind) below. Also, please give me the link if you want your mod showcase below. Feel free to check out my YouTube channel: www.youtube.com/channel/UCriKmJmtHvnGSn7s9gsyTxg  &nbsp; Minecraft 1.8 version may be created, but it will be much different. For the crafting recipes, you can comment or wait for my mod showcase to cover it all.

This mod is officially out of Pre-Alpha. Hooray! Now it's in just Alpha... XD

If you need the crafting recipes, please reply to this comment.

Hey , I Know that you summited a idea for my mod. because of that, i have an idea for your mod. You can probity add some Zolix Armour to the mod.