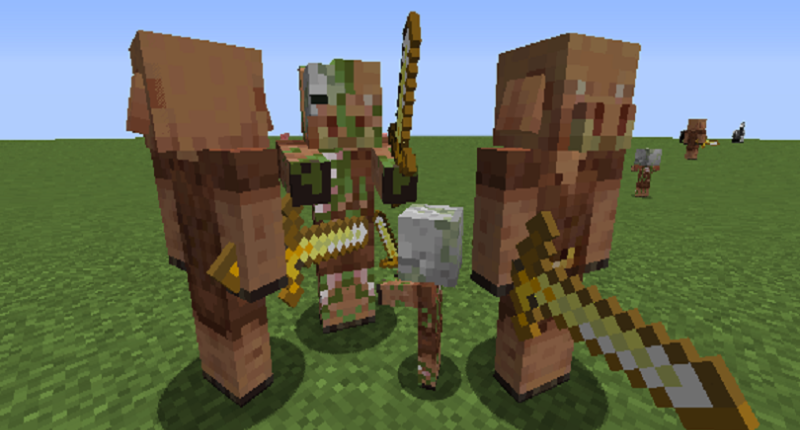 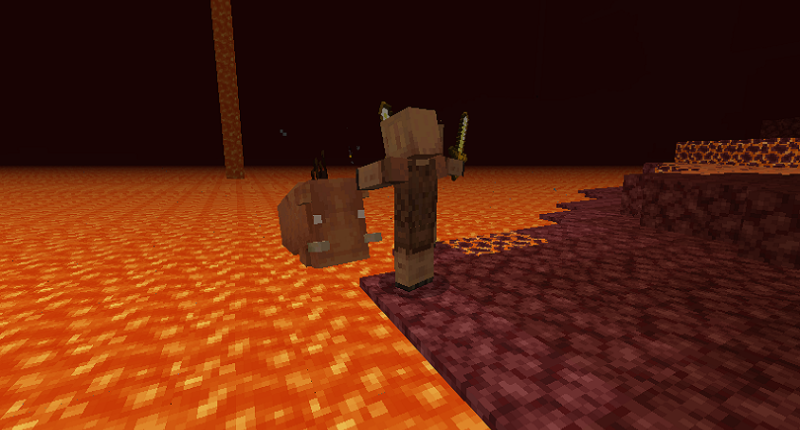 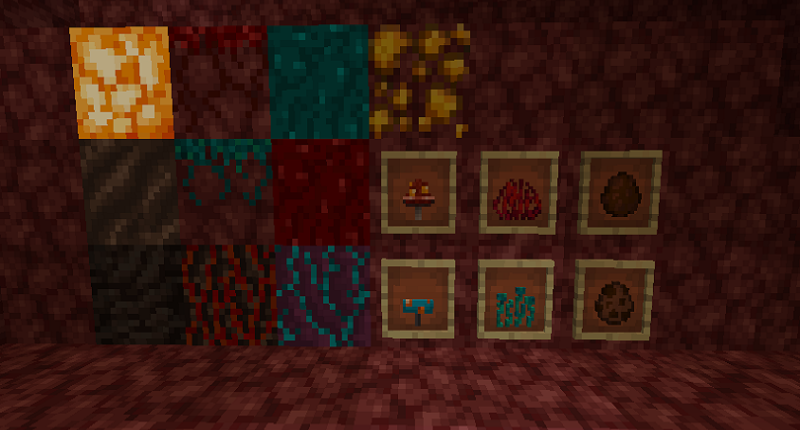 all the blocks and items for now (some have recipes included) 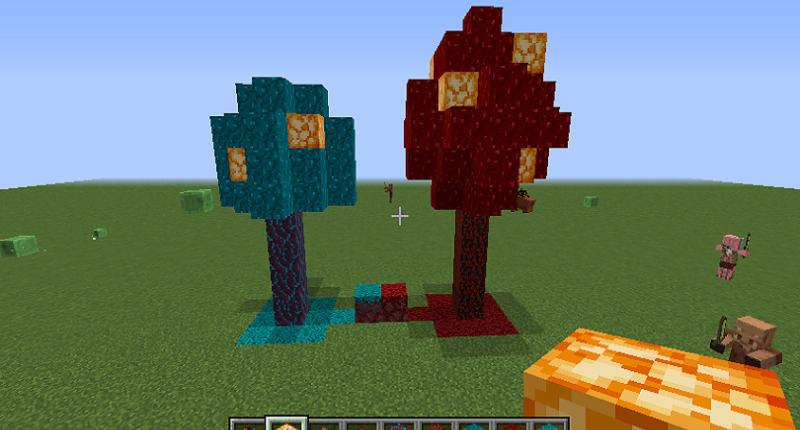 Spoiler for the next update (blue and red netherwart mushroom growths) 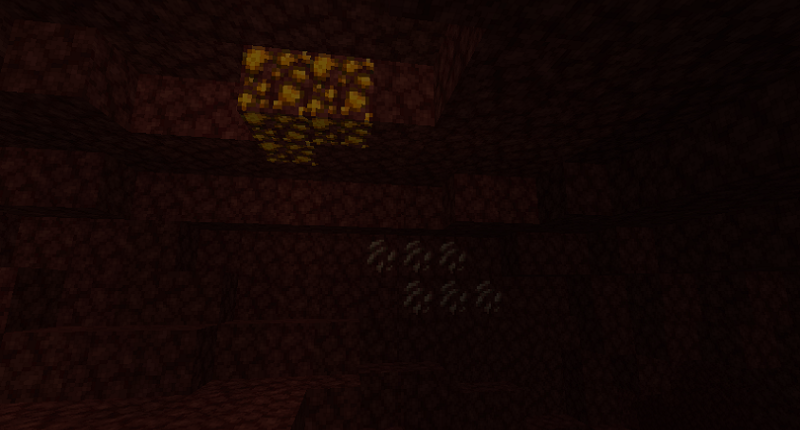 gold ore of the nether (it is very difficult to ayar, it has a small probability of exploding, when it breaks, it also releases a block of gold and a lot of experience) 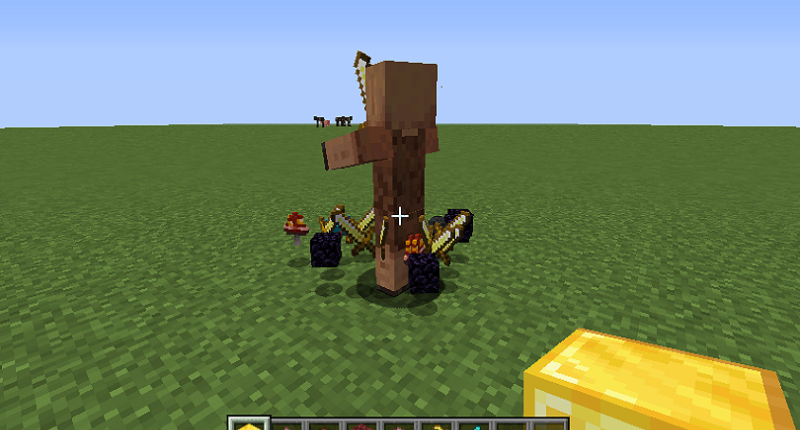 exchange system with the piglins, in the example of the image for a large number of gold blocks they will give you a large number of items (you just have to right click them with a gold block and they will release the item to be exchanged and a little experience like the villagers, there are several exchanges) more exchanges and improvements will be added in the next update

This mod is to give life to the next version of Minecraft (Nether update 1.16)

Did you ever want to see the live pigman zombies?
Well, this is your chance, this mod brings the dream of many (this new mob is known as piglin)
also once you wanted a variant of the pig for hostile?, because you think this mod also brings it and is called hoglin

+ This mod contains the following languages:

-1 variant of English = en_us (English from the United States)

-Hoglins love to eat pigs (be careful to take a hoglin to the overwold, it will end your pig farm)
-The texture of the zombie pigman (zombified piglins) has been adjusted for baby zombie pigmans (and my signature has been adjusted in texture)
-Now the piglins flee correctly from the explosion of the wither boss
-Nerthwart mushrooms (red and blue) now behave similar to vanilla mushrooms, they can only be grown with bone meal)
-It has been added to the mob D The floating hell (for now it is only a test, it is a new type of super dangerous boss is a kind of summoner of creatures of the nether, it can sometimes fly and throw fireballs that do not burn but do a lot of damage, with its 4 shields you can avoid receiving damage from an attacker and use the force of the nether to regenerate and become faster to it, (I accept restraints to improve it)
-Piglins are generated correctly but are rare to see (adding bastions will be more common)

* working on the bastions for the next update, it will be soon (possibly next week, if someone wants to offer their help with models of this structure would be perfect) *

* working on the bastions, the mob "the floating hell" and arrangement of netherwart mushroom (blue and red variants) for the next update *

(I regret that this update is so small and has taken so long, lately I did not have much free time and had many problems with my computer)

Mod Start
-This mod adds the following:
* New creatures, recipes, objects and more such as:
-Piglin (it is the live version of the pigmans, they exchange things in exchange for gold blocks by right clicking them, "In the next version I will bring a better model more similar to that of the minecon")
-Hoglin (is a kind of wild boar, a hostile and strong mob although somewhat silly, has a small bug in the neck will be fixed in a next version)
-Crystallized glowstone block (and its recipe)
-Dense soul sand block (and its recipe)
-Soul root block
-Netherrack block (red and blue variants)
-Gold block of the nether (it is a compacted block that when broken it releases a block of gold, but be careful it can explode because of the high pressure inside it, it is very difficult to find, this block I did to give logic to the golden swords of the zombie pig men and the pigmans)
- Netherwart block (they are impure versions made for the blue and red netherwart mushroom)
-the wart fungus of the nether (red and blue variants, have a small bug, suletan sugarcane when broken, will be fixed in a next version)
- netherwart lawn (red and blue variants also have the same bug as mushroom)

*working on the previously mentioned settings and more epic and interesting things (for the next version the biomes, growths of the mushrooms of netherwart and the bationes in which the piglins will be generated will be introduced, and the mod D of the minecon 2017 the floating hell)

Looks cool!
You can only have your description in English though. mcreator.net/wiki/modification-publishing-guidelines

thank you, and ok i already arranged the description so that it is all in english

Do you already have the models for the piglins, and hoglins? Because if not, i could recreate them and send them over to you in google drive.

I already have the hoglin model (it appears in the images) but the piglin model I still have to put the golden sword in the model, but the body is ready

but if you would like to help with the bastion structures, it could be very good

Great mod, it looks very similar to the trailer :D

thank you, I know it seems like it, it took me a long time to do it (and there are still many more things to come)

hi, really cool mod! does the new nether biomes exist in the mod?