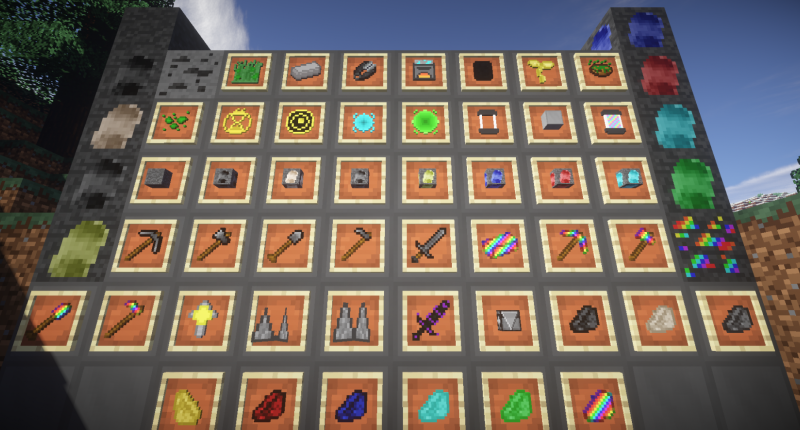 All Items from the modification.

A Minecraft mod that'll make your life MUCH easier with several stuff.

It contains a bunch of useful tools, items, blocks, etc. that can help you to survive and have fun playing Minecraft!

TIP: Use JEI or NEI to get recipes!

Tungsten Ingot: The base material of the modification. Can be obtained from Tungsten Ore and transformed into Tungsten Block.

Wood Handler: Transforms saplings (from vanilla Minecraft and this mod) into logs of that tree type.

Time Locket: Used to change time (from day to night and back).

Totem of Weather: Used to change weather (begin or stop rain). Drops from Witches with 50% chance.

Emblem of Panic: Gives you speed and jump boost when you have less than 8 HP. Drops from Villagers with 100% chance.

Golden Clover: Regenerates you when you have 5 or less HP. Drops from Evokers with 20% chance.

Soul of Flight: Allows you to fly. Drops from Bats, Blazes and Ghasts with 2% chance and from Ender Dragon with 50% chance.

Ore Extractor: Extracts chunks from ores (from vanilla Minecraft and this mod) (2 chunks from 1 ore) so they could be smelted into final product.

Forsaken Mines: Dimension with skeletons, Dry Stone and Dry Ores that drop 3 pieces of material instead of one. You can get there using Miner's Battery.

Rainbow Ingot: The best material of the modification. Can be obtained from Rainbow Ore (hidden in the Forsaken Mines).

Void Blade: Over-powered endgame (or not?) sword. Drops from Ender Dragon with 100% chance.

That's all. I wait for your opinion. Write down here if you want to say sth or report a bug. More stuff soon (not sure). Goodbye and thx for your attention!

Hey! I enjoyed your mod as it added a couple cool things. I still don't understand the dry ores though :P, but anyways I was wanting to use some of your ideas in my mod, would you accept that if I give you full credit for those ideas, and if you allow me, see ya soon thx!

Hello! Sorry for the late answer!
Thanks for your opinion. Yes, I allow you to use some of the things with the full credits. Furthermore, it would be really nice if you leave a link to my mod c: (it's not necessary tho)
P.S. the dry ores are just give you more materials than the common one (for example, dry coal ore gives you 3 coal instead of 1)

nice mod, and the textures are looking good.