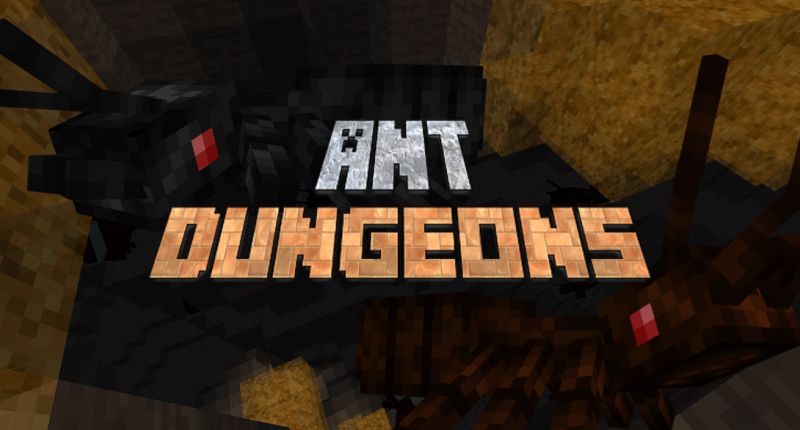 Three ant species with various castes as of now. 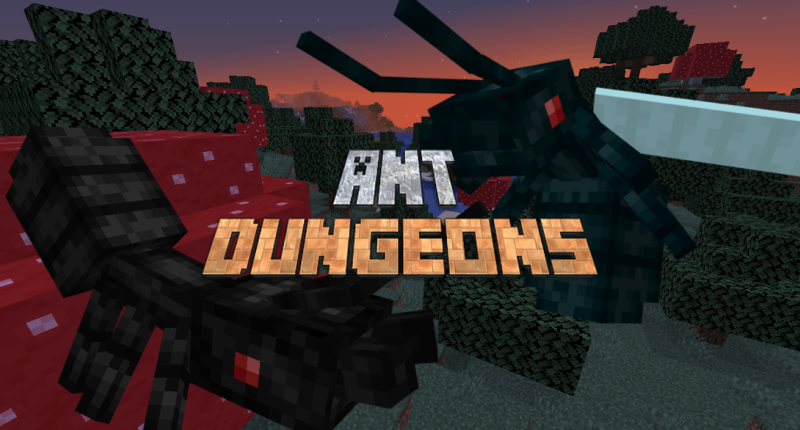 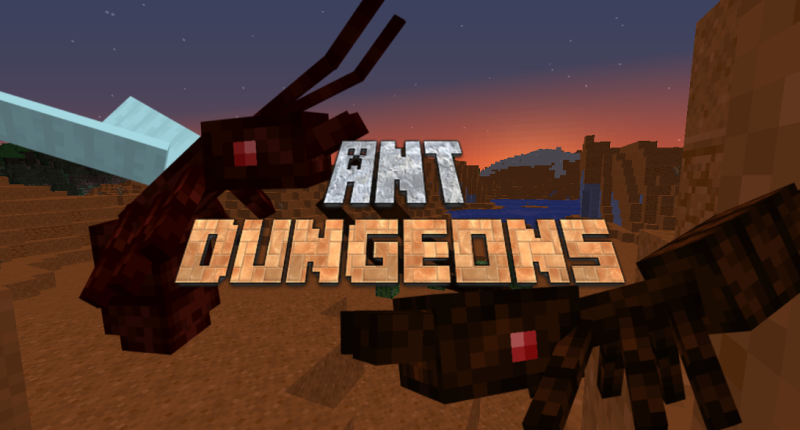 Go through the Ant Desert to find Red Ants... 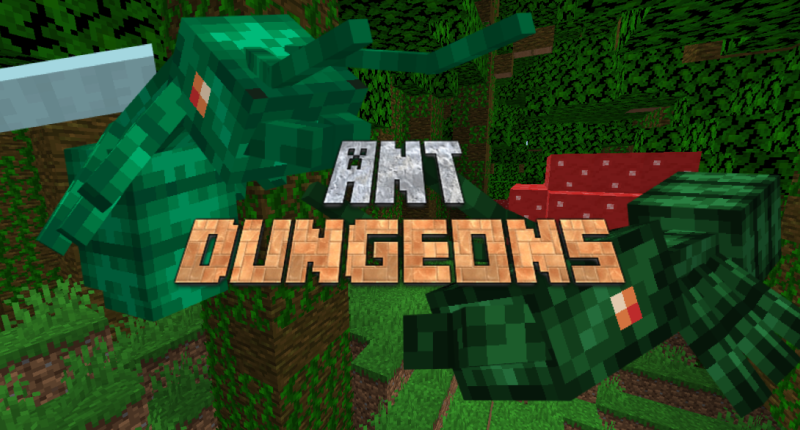 Or enter the Ant Jungle to find Green Ants. 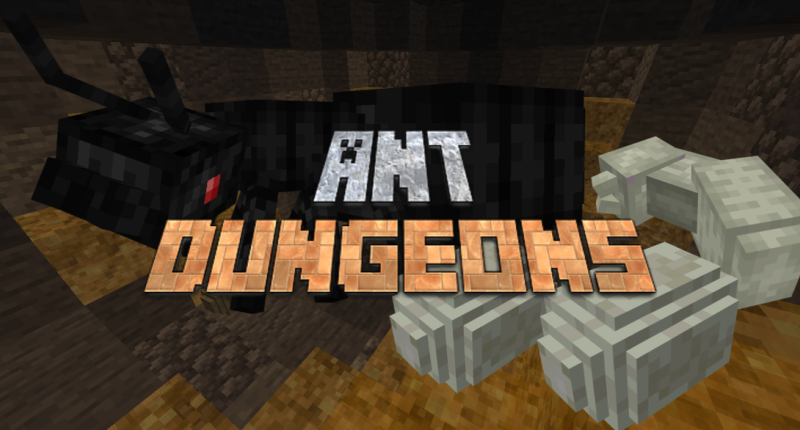 Challenge yourself to search for the Queen and get a helpful new item.

Ant Dungeons brings to Minecraft three ant species with various castes/variants along with new biomes, where you can exclusively find them.

If you like this mod and my work in general, please consider supporting me with a little something over at:

(Note: None of these are actual ant species, though I took inspiration on the behaviors of different real-life ant species). 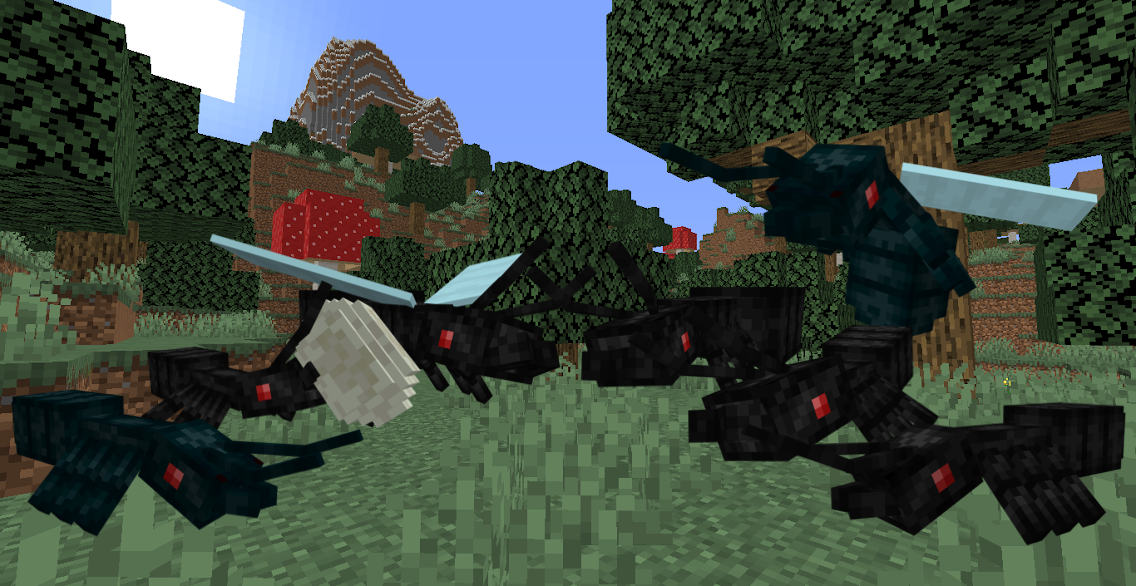 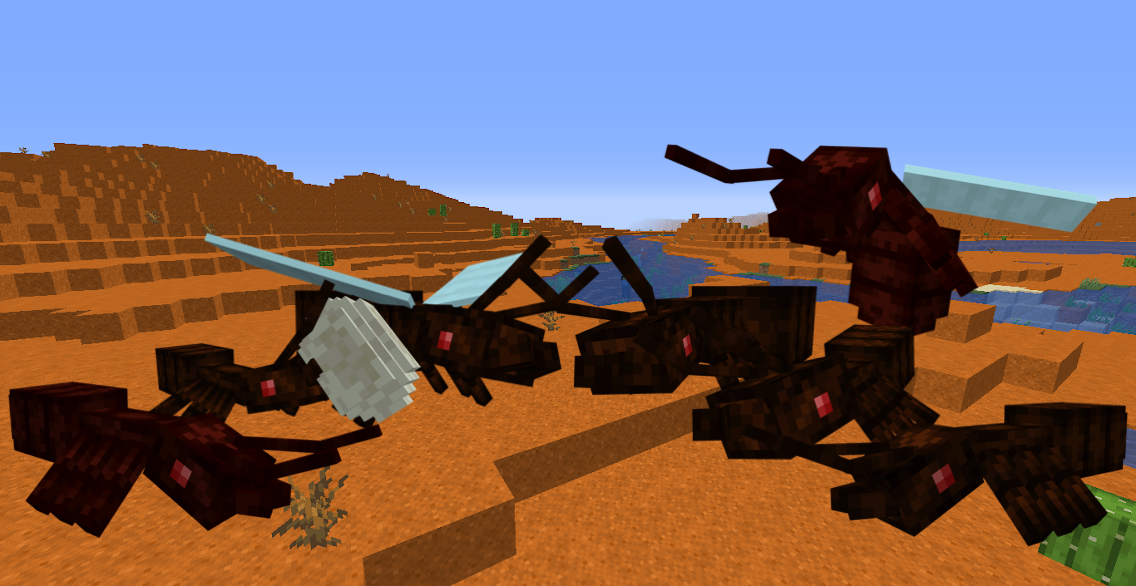 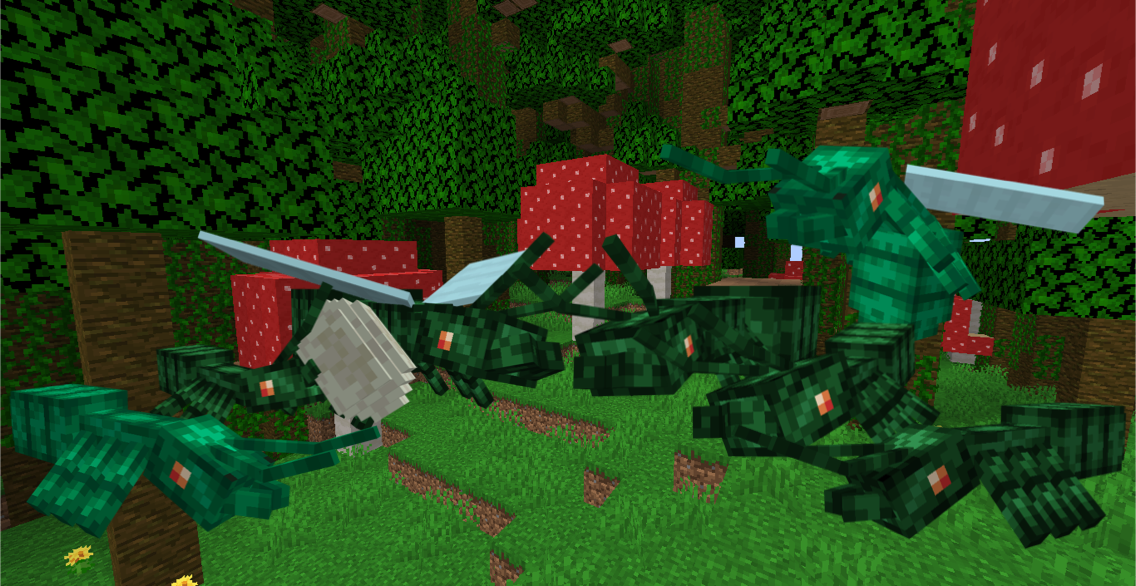 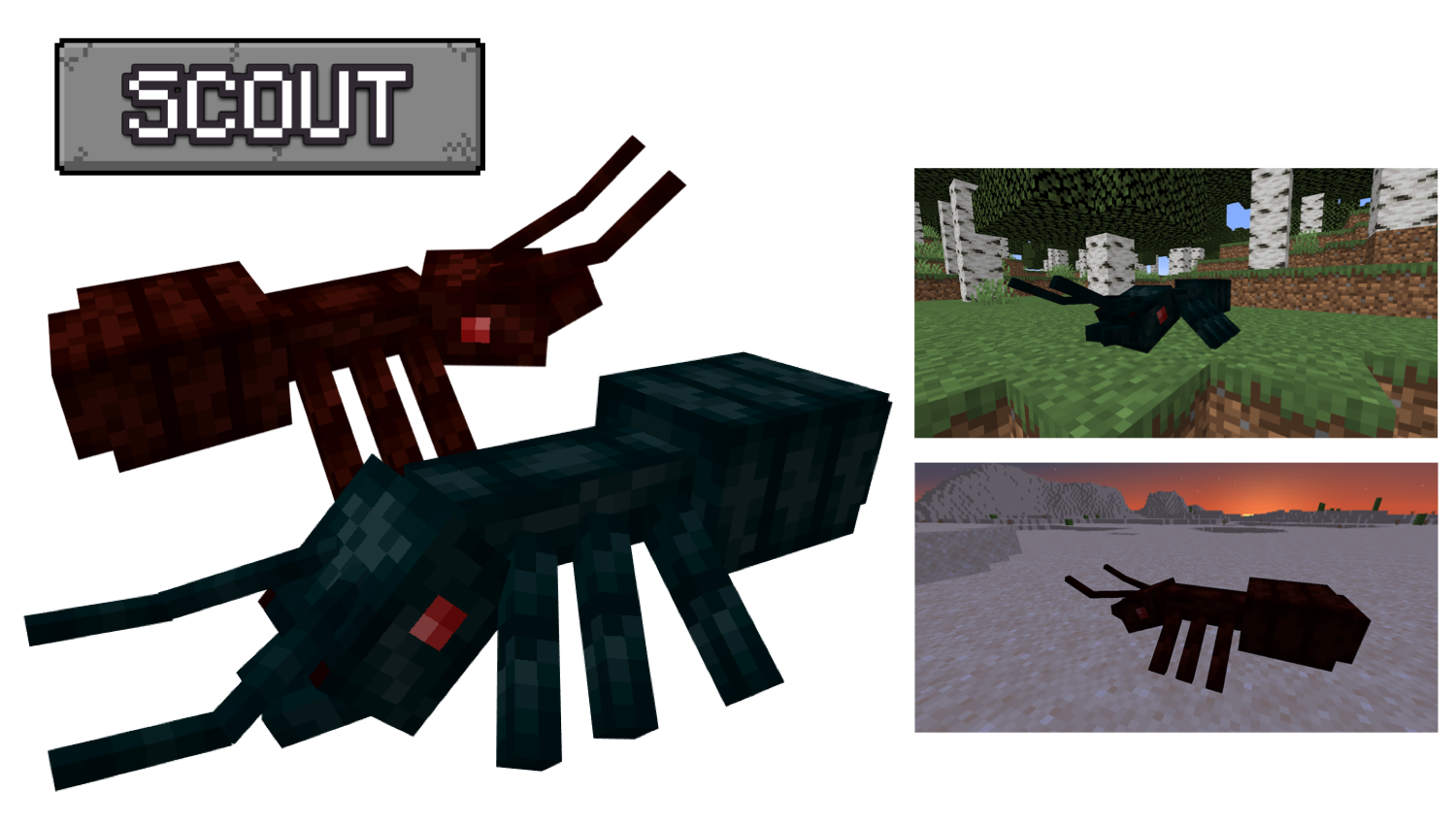 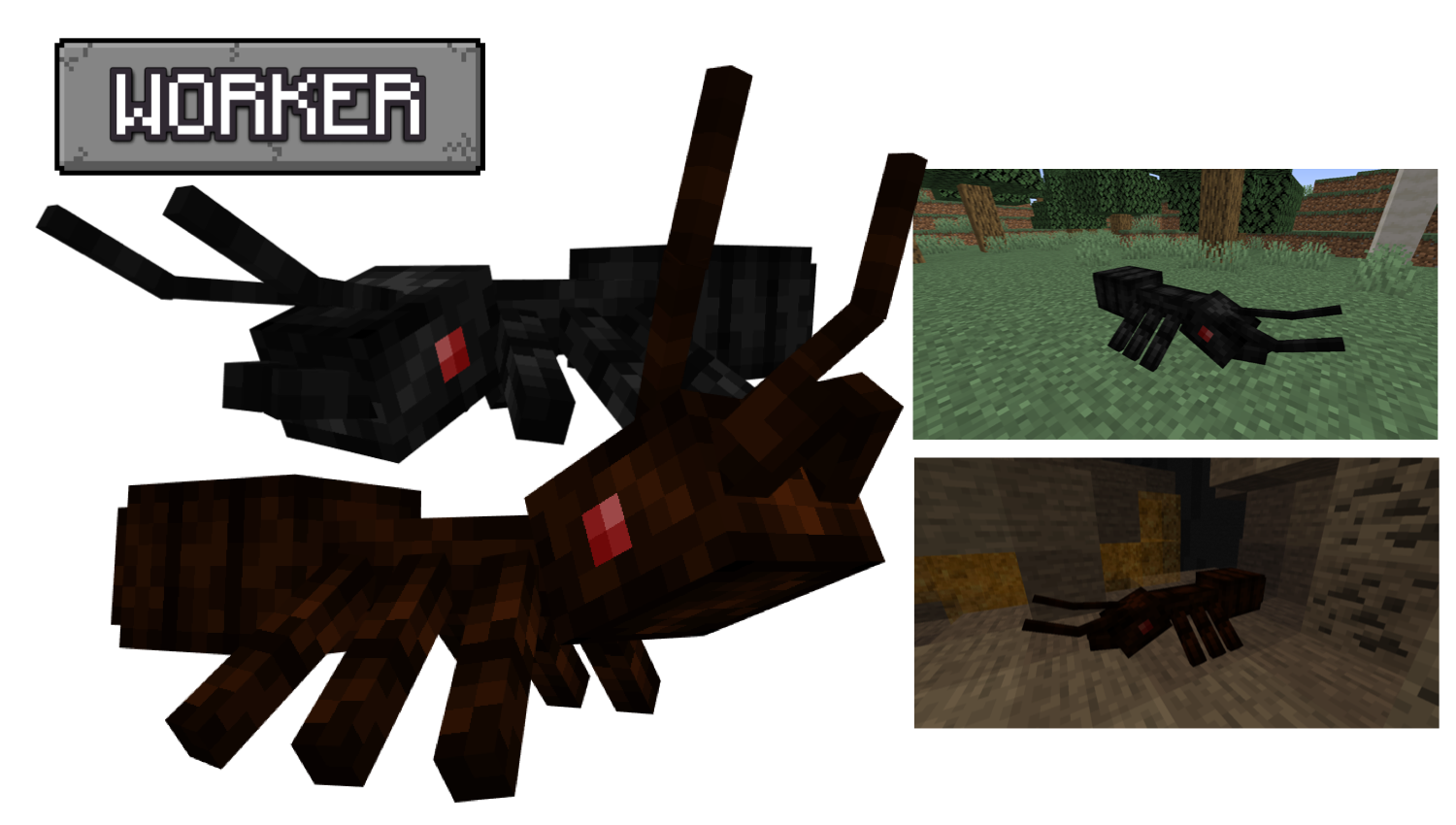 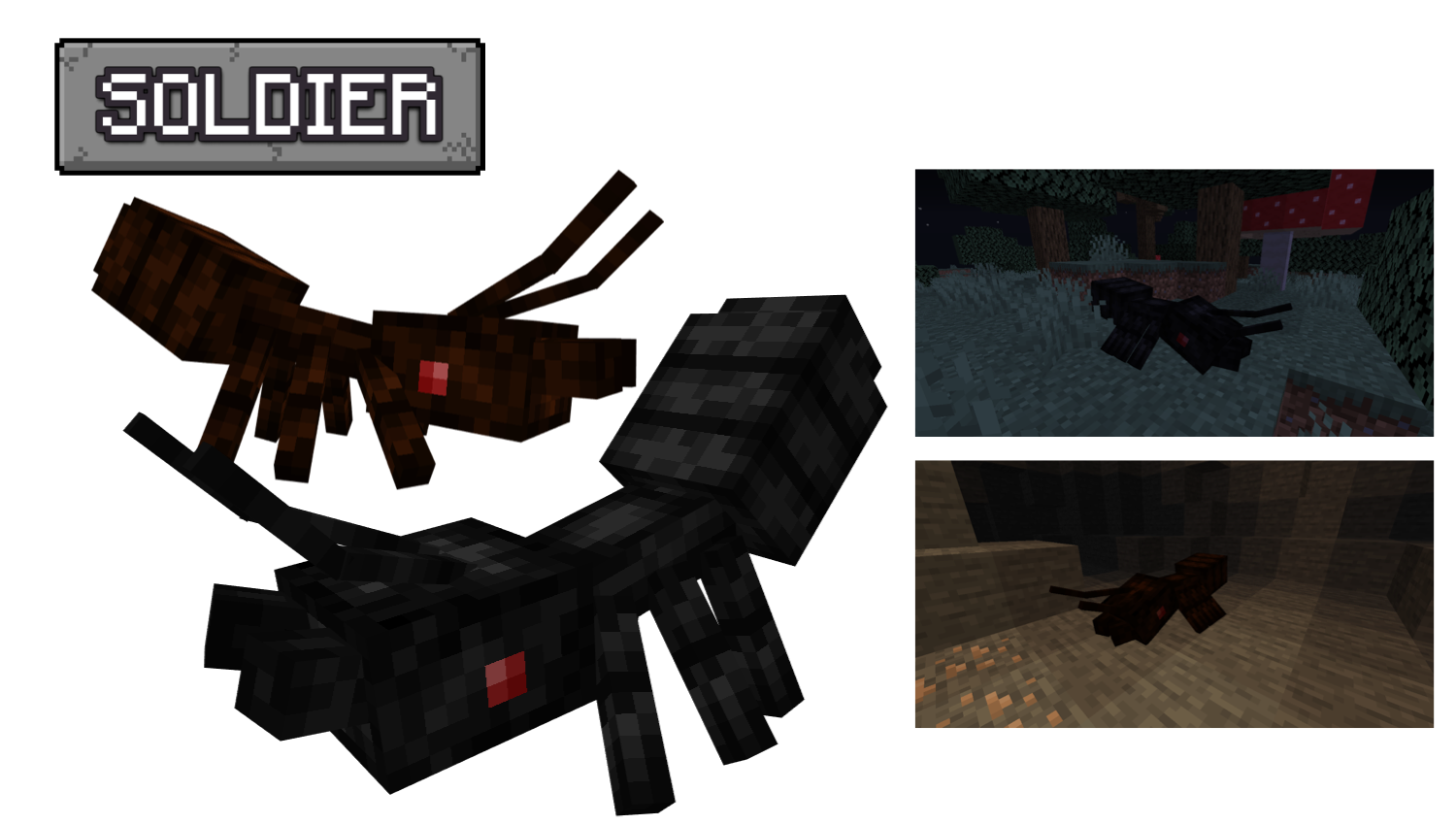 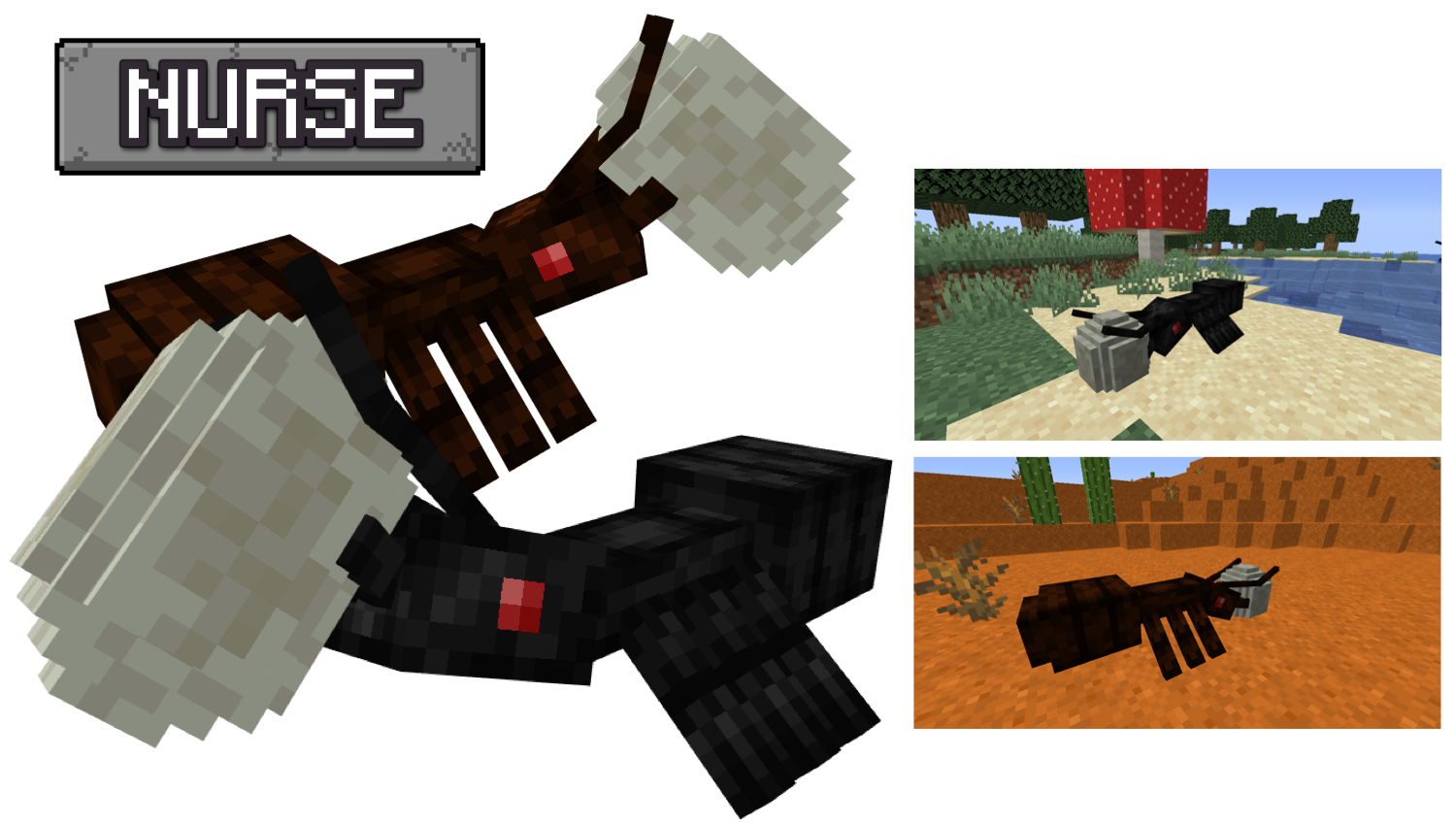 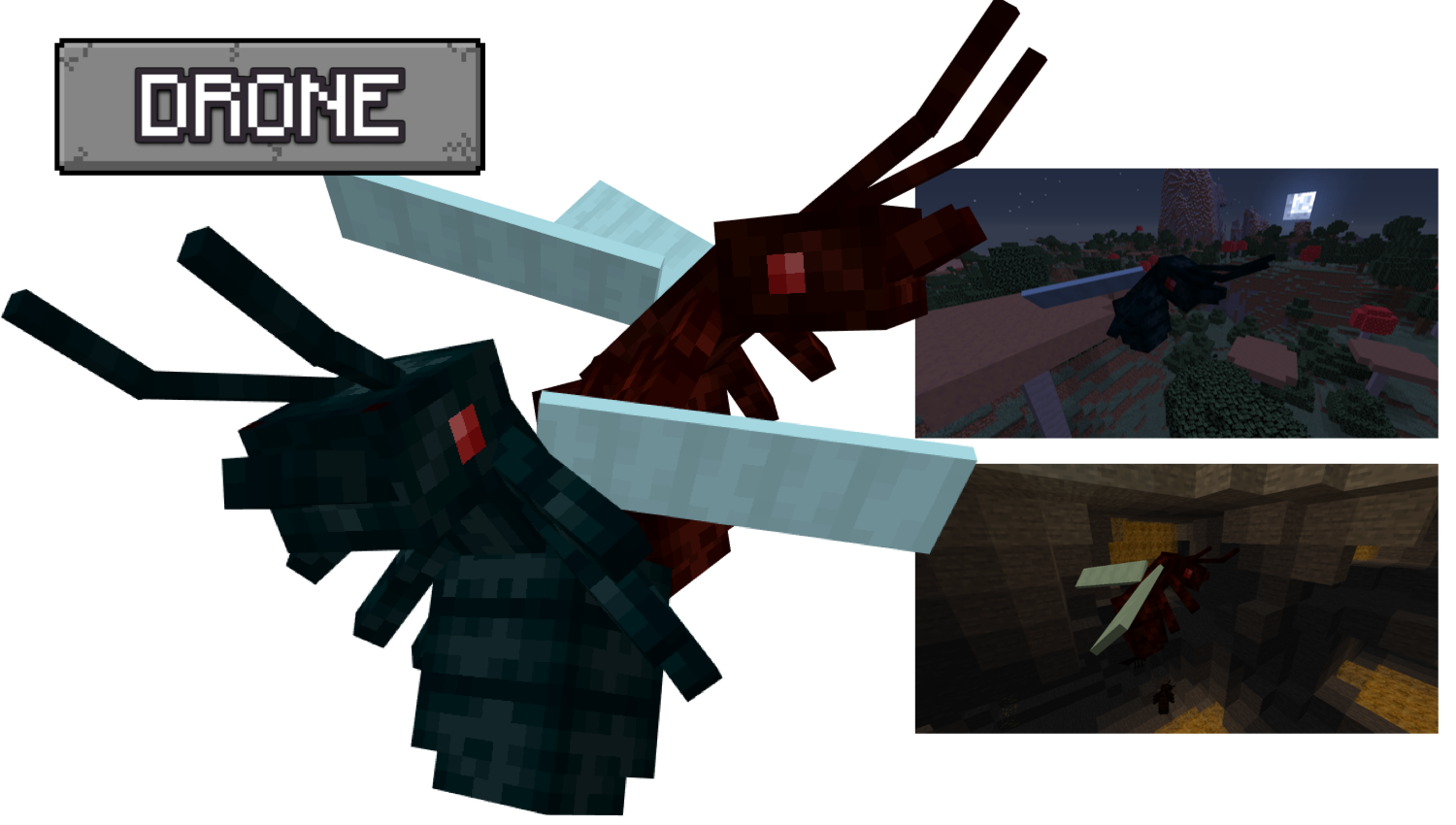 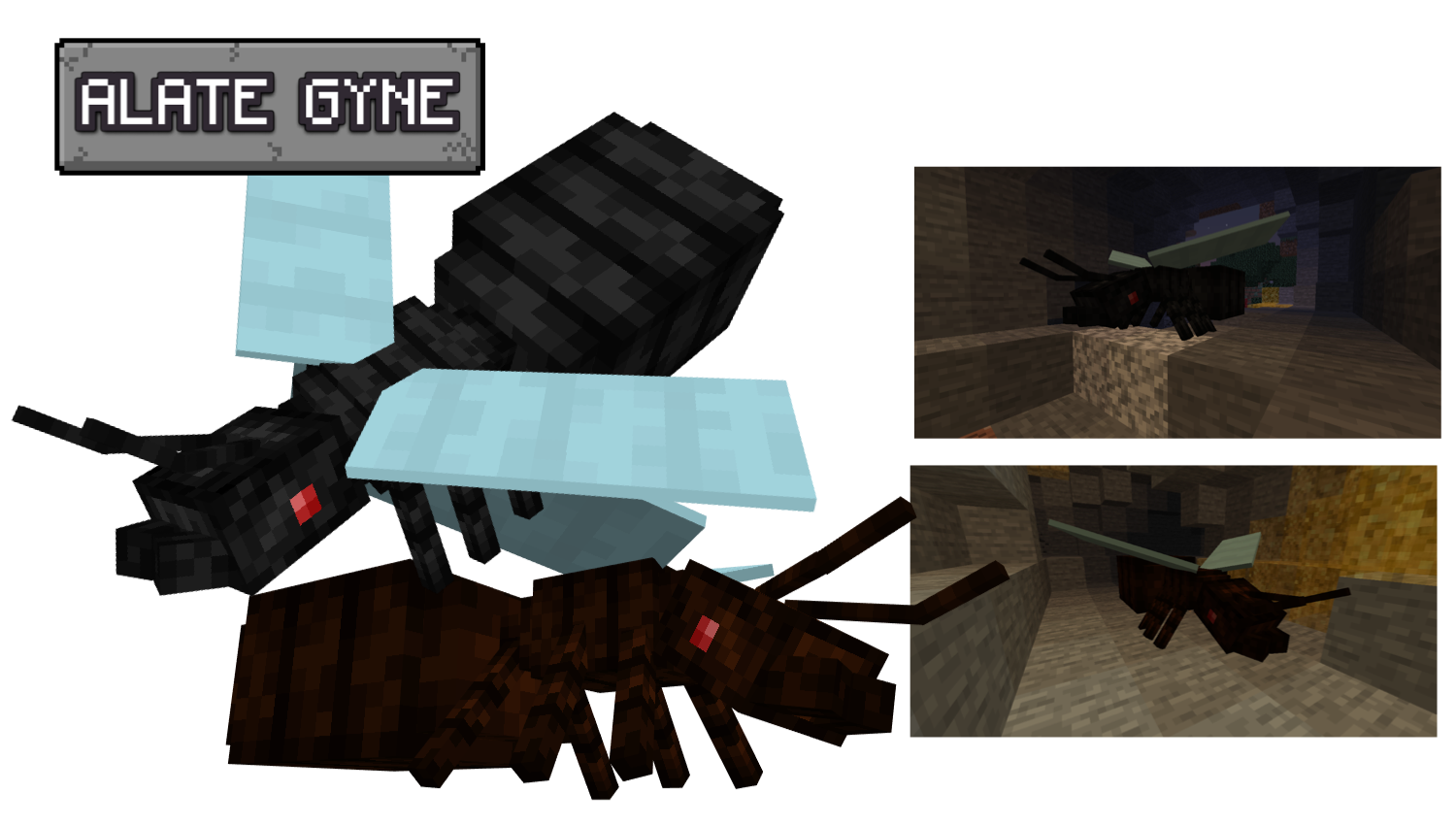 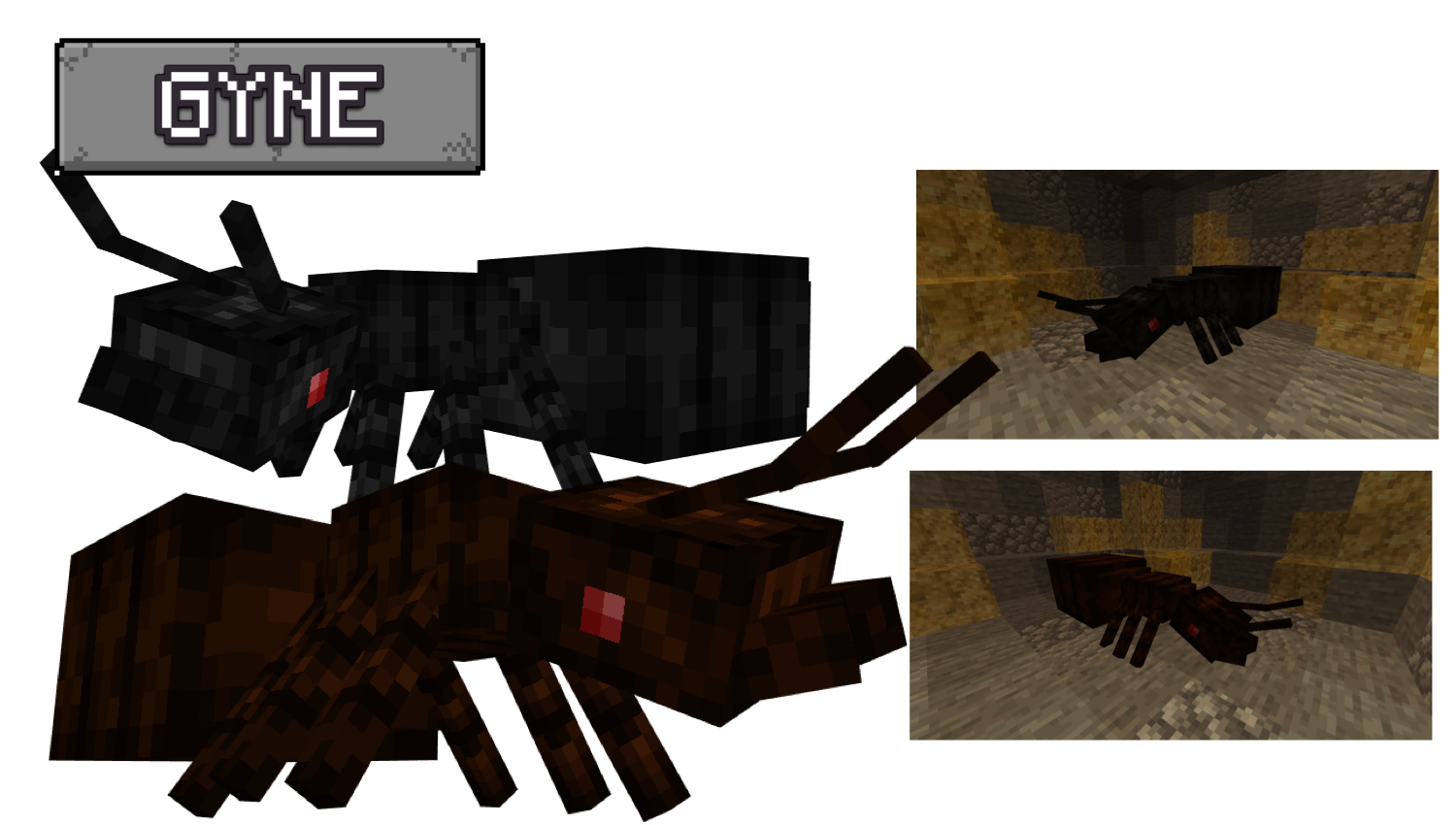 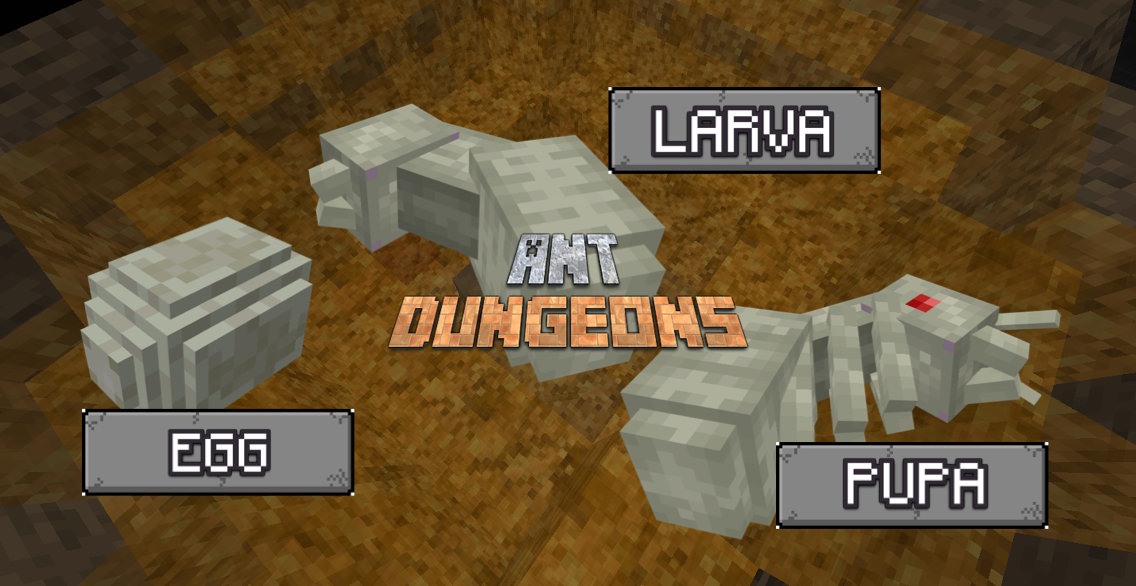 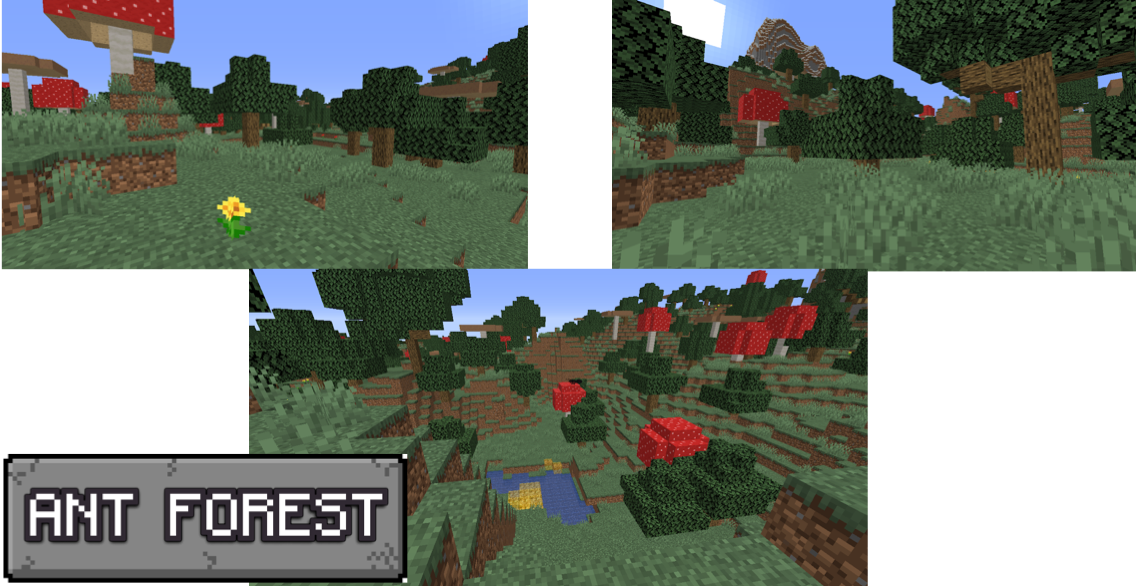 Home of the Black Ants, it can be identified with giant trees and mushrooms covering its surface. 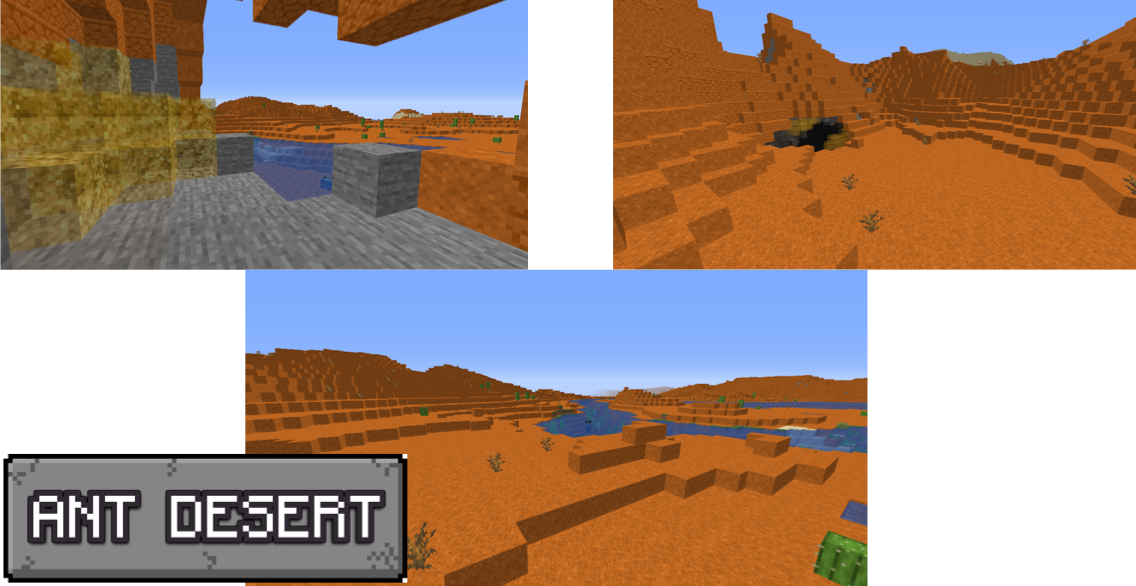 Completely covered in red sand, it is inhabited by the Red Ants. 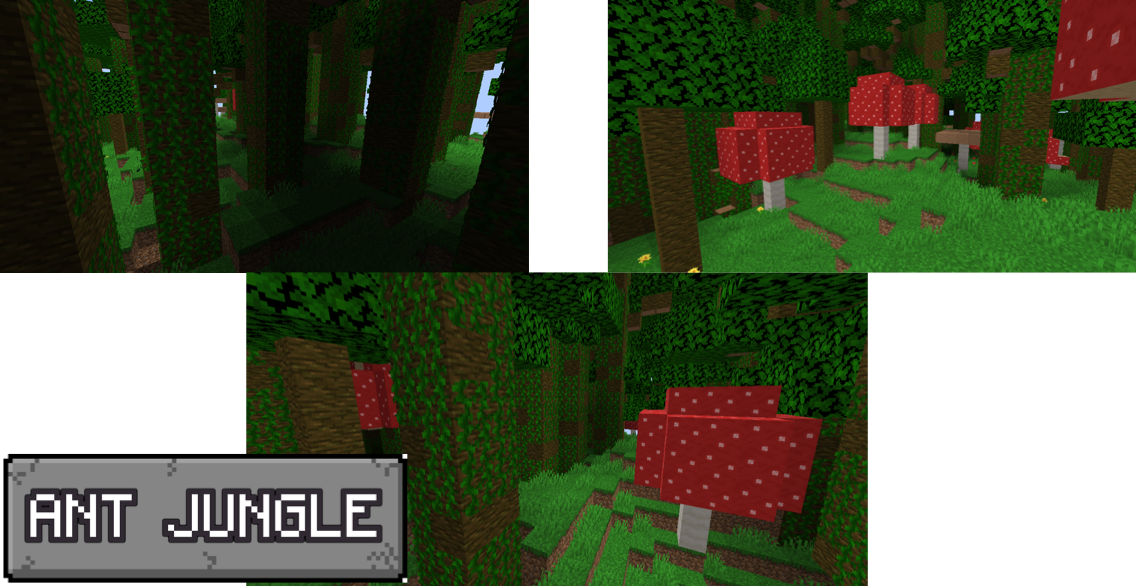 The rarest biome of the three. Green Ants have made this jungle their home, establishing some of their chambers in trees instead of underground. 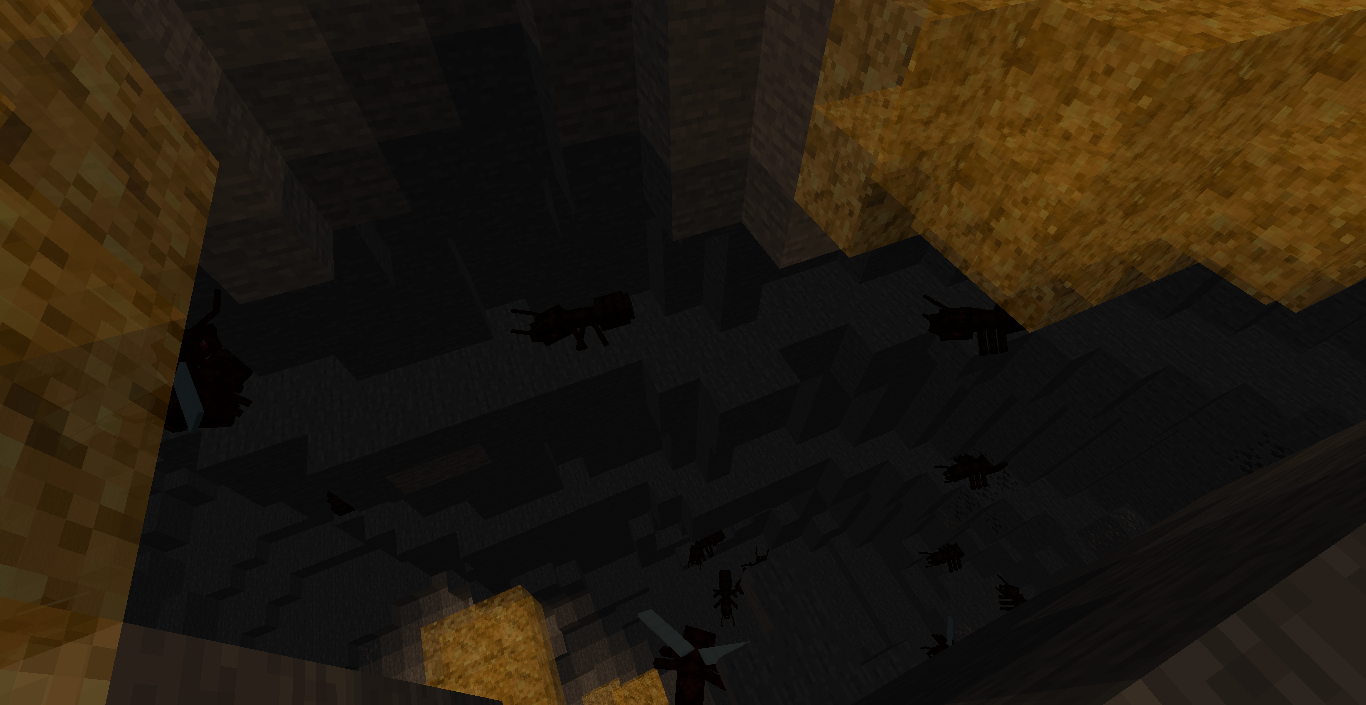 The underground of the Ant Forest and the Ant Desert biomes will contain Nursery and Gyne Chambers, while these chambers will generate in trees in the Ant Jungle biome. A new block is also generated in the underground of all three biomes: Resin!

(Disclaimer: The blocks that are presented here are heavily based on Josjosh34’s ideas for ant dungeons in the Minecraft Forums Suggestions. Although the textures may look similar, they are completely made by me. You can check out his suggestion thread over at https://www.minecraftforum.net/forums/minecraft-java-edition/suggestion…) 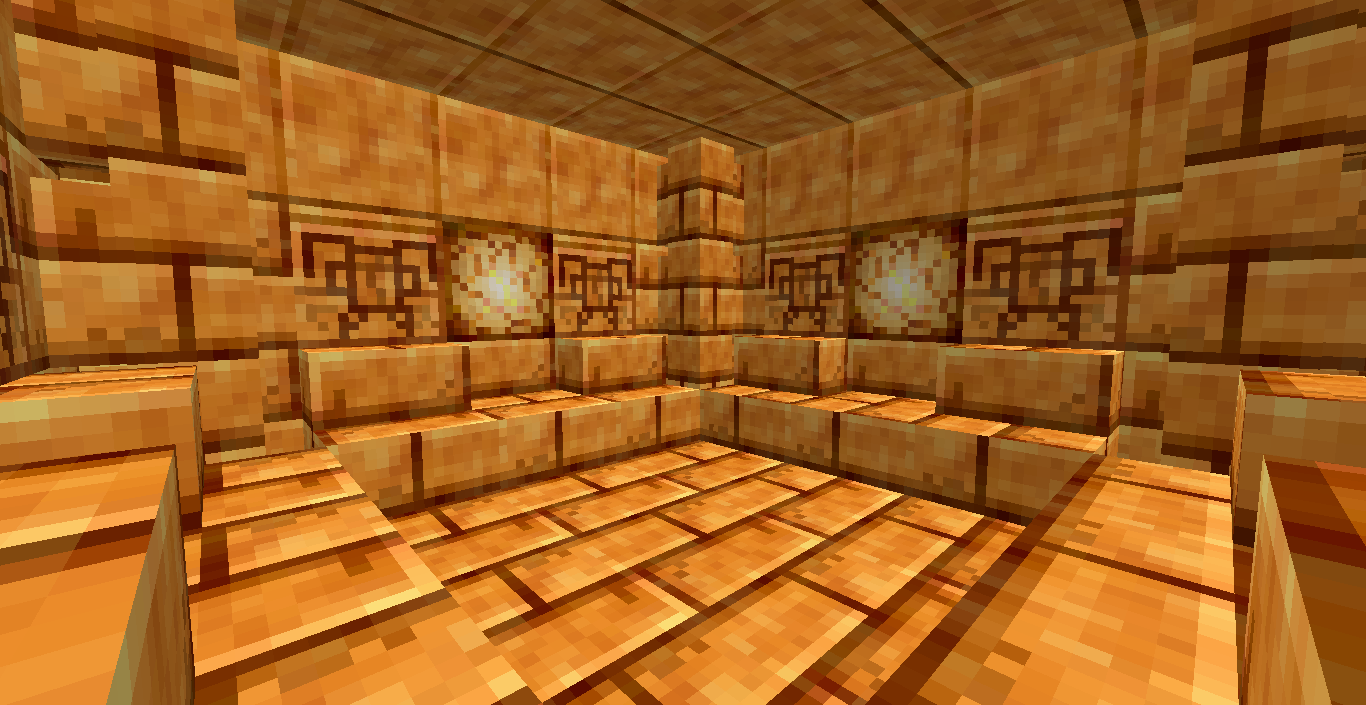 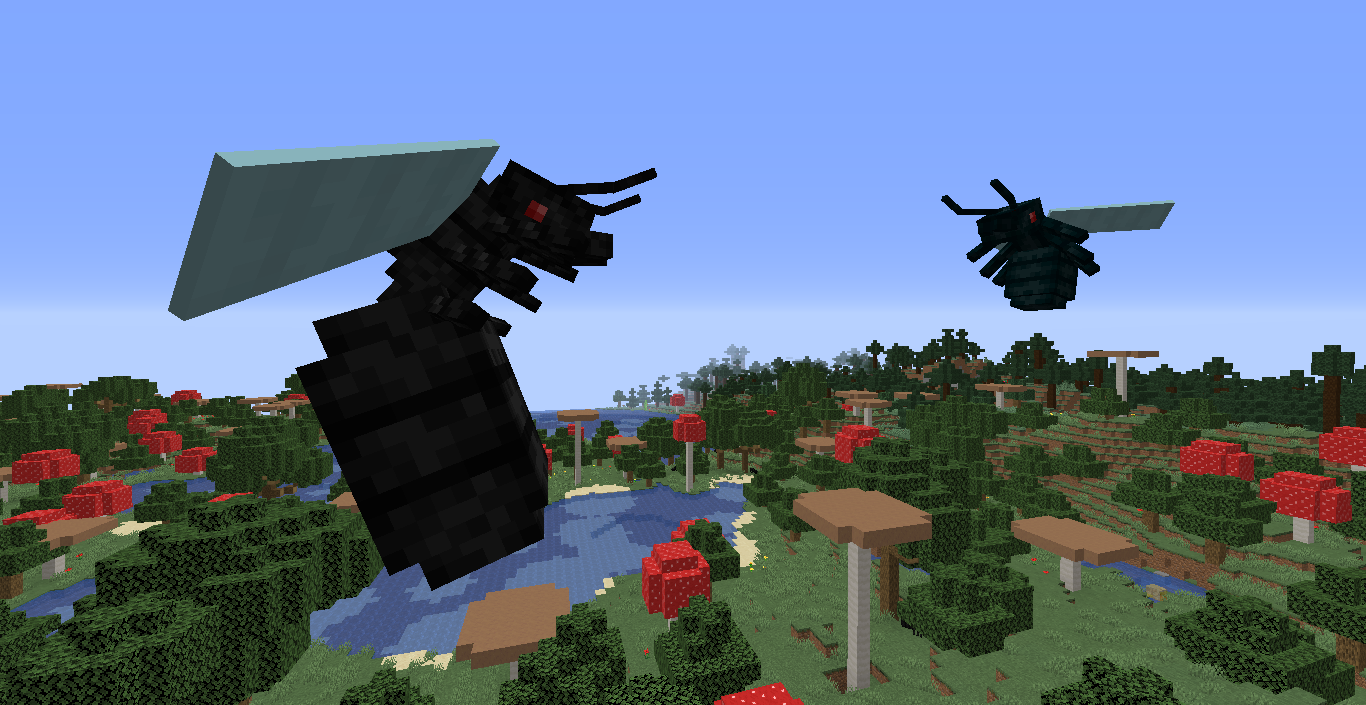 Love has come to Ant Dungeons 2.0! In order to cause a Nuptial Flight, you must craft a Fertility Beacon and build a totem-like structure with it, putting a chiseled amber block below and one on top of it. Right click the Beacon and the season will have begun! It consists of two stages, each lasting a complete Minecraft day: 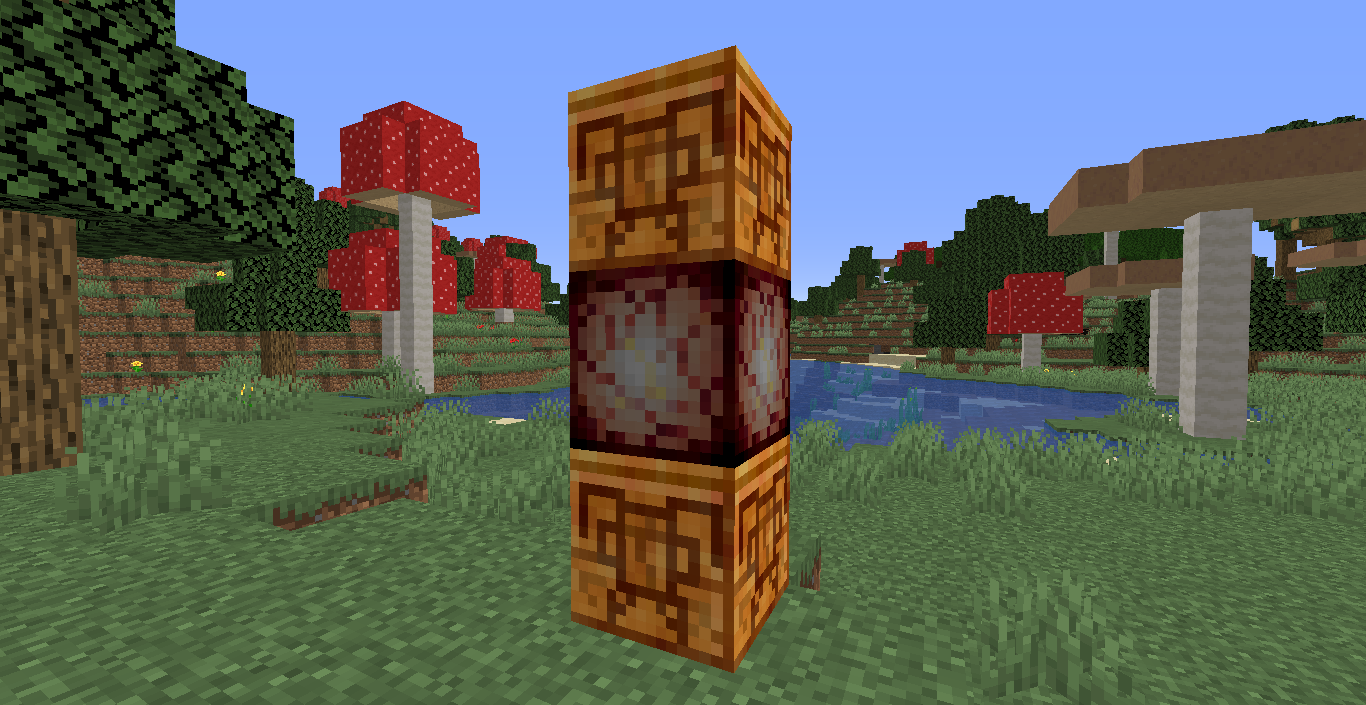 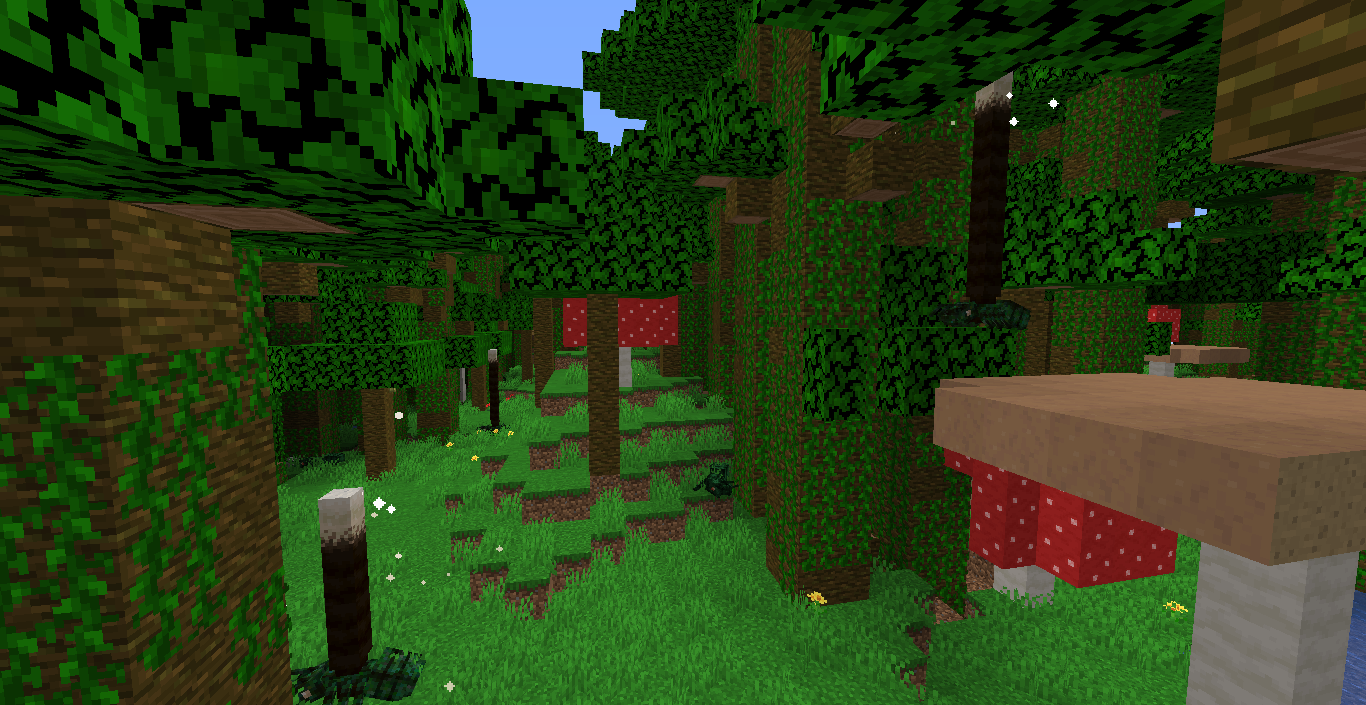 Just like you have to deal with Zombies and undead monsters, ants have to deal with the dreaded Cordyceps fungus. Ants have a slight chance of spawning naturally with Cordyceps, and you can identify when an ant has the fungus if it emmits light yellow potion particles and walks slower than the other ants. Only Gynes are immune to Cordyceps. 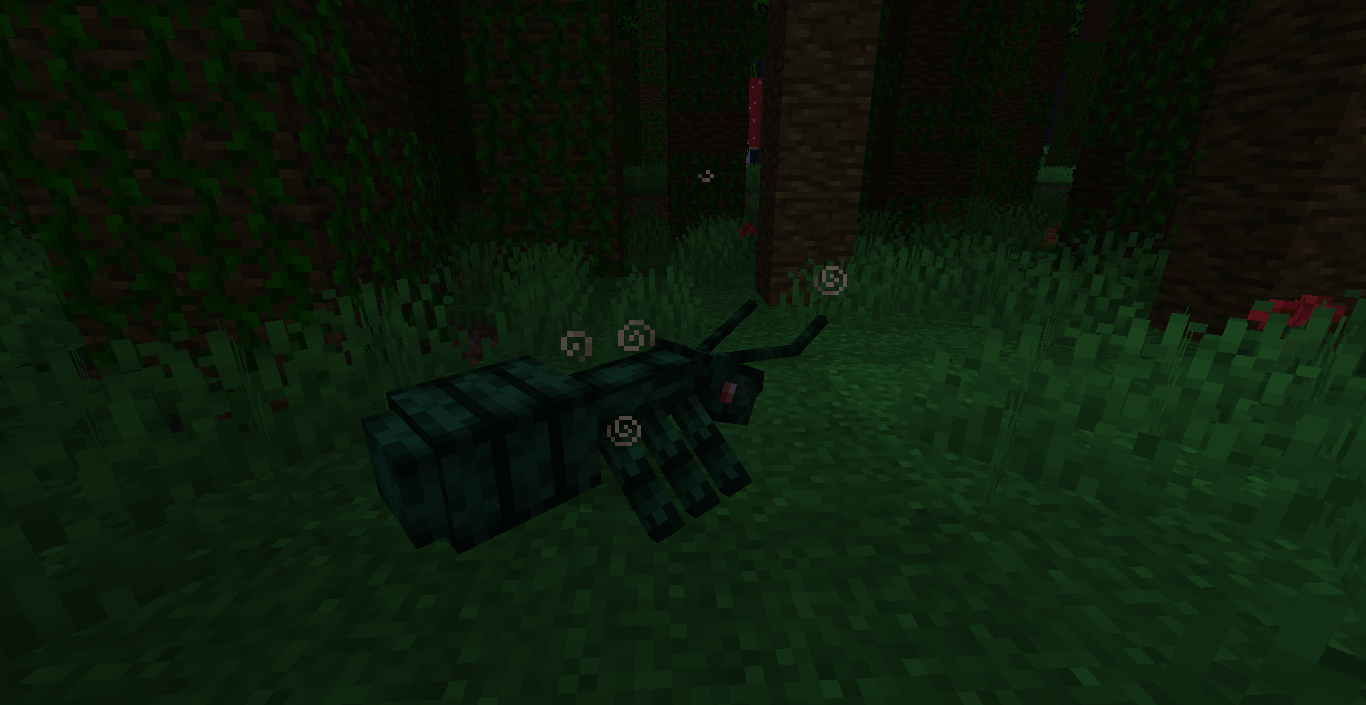 If you get distracted, this fungus will kill the ant and use its body to emerge to the surface. Once the Cordyceps has done this, it will be difficult to get rid of it, and it will become a dangerous hazard for the ants and for you as well! However, if you find a way to farm this fungus safely with your axe, it might make your traveling through the Ant Biomes easier. 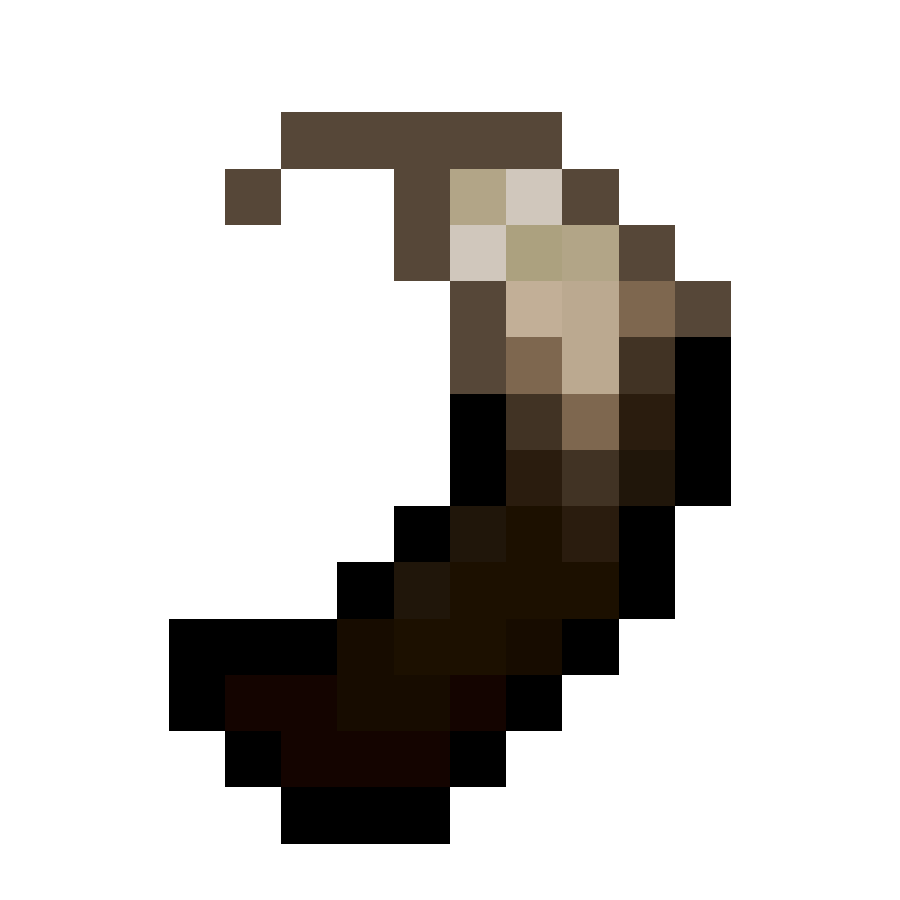 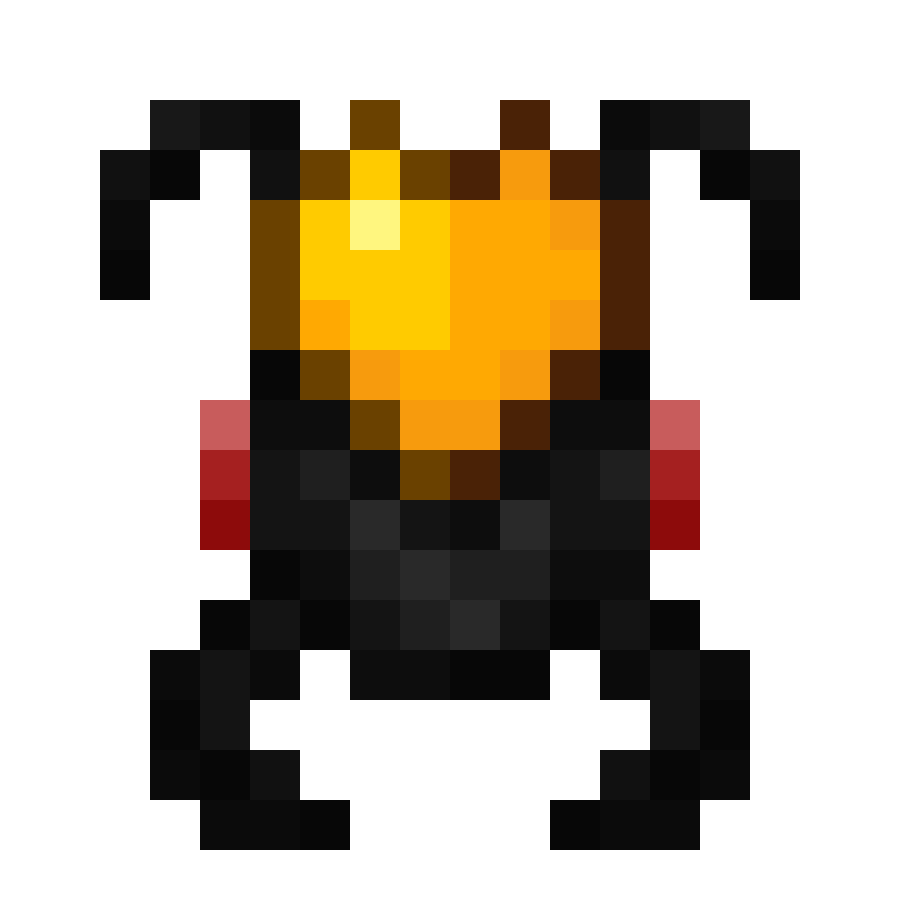 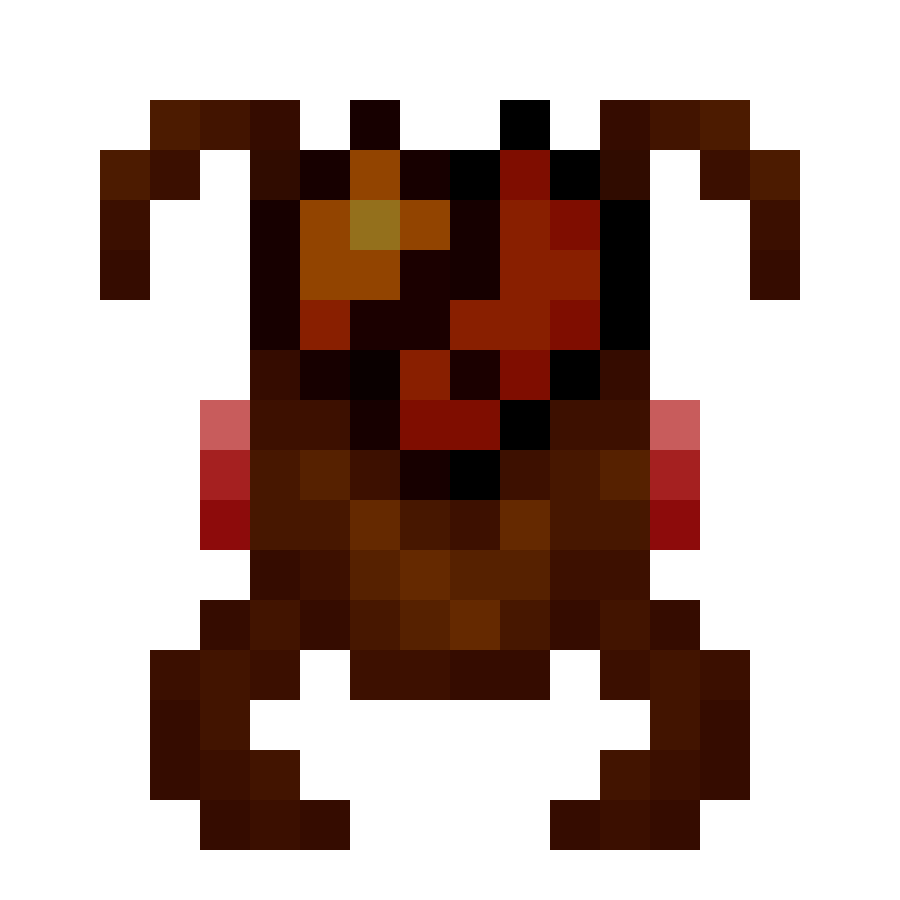 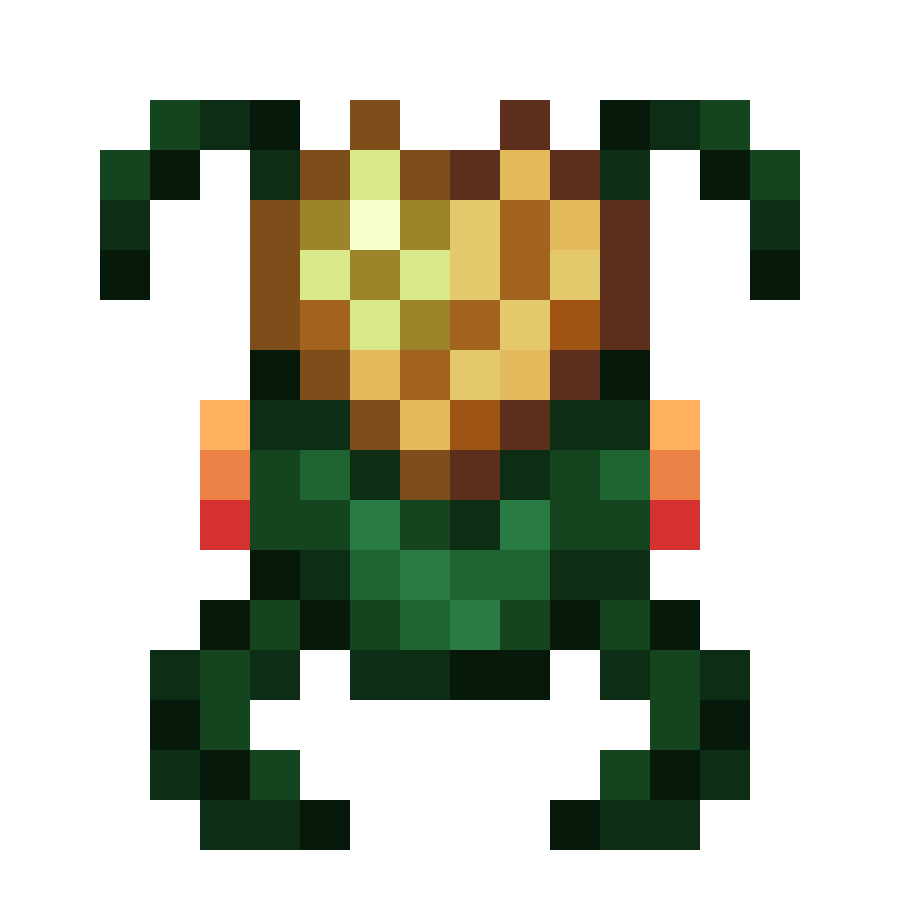 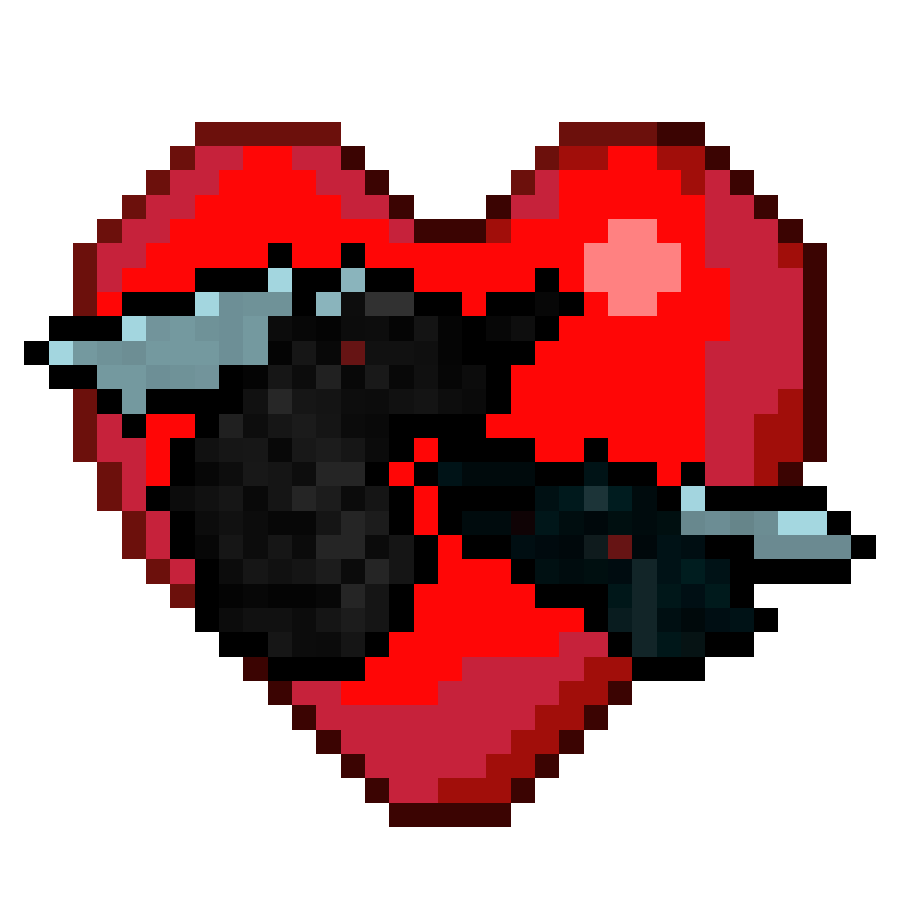 And that's it! If there’s any other ant caste and/or race that you guys think that could enhance this mod, please tell me! I appreciate all comments and suggestions.

Wow! This mod looks cool! It reminds me of Erebus!
Keep updating!

Thank you!! I want to expand it even further, as long as it still keeps a somewhat vanilla-vibe :3

Nice mod! Im think, this is was next MoTW!

Thank you very much! I might submit it for MoTW later on, but I wanna see if there are still more things that I can add to the mod to enhance it :3

This mod is cool ! Could you please contact me ? Here's my discord ID: napo#0255

Btw, congrats for your MoTW! Your models and textures are awesome!

Thanks, dude! hope you keep updating your mod.

Put it on curseforge

Thanks for the advice! I’ll put it there as soon as I can :3