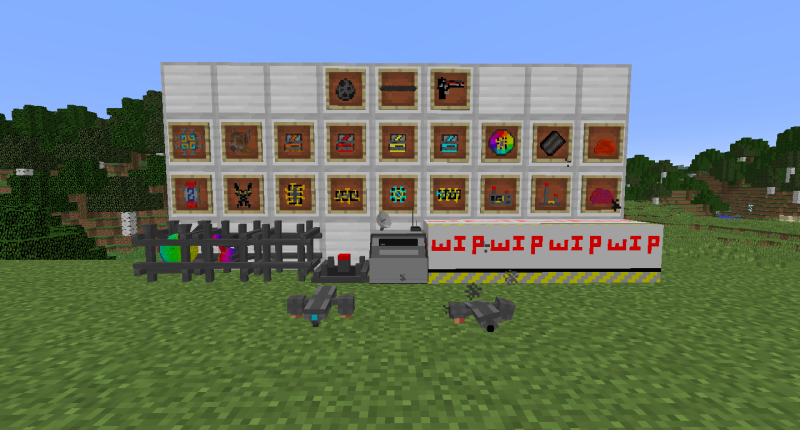 This is an older image of the mod, there is more in it now and the models are different

A mod that adds drones to the game.   Now for minecraft 1.15.2 and 1.14.4!
check it out on curseforge: https://www.curseforge.com/minecraft/mc-mods/drone-craft
The tutorial videos and most new updates will be on curseforge but bigger releases i will also put here.

This mod is super new and after i finish off the base part of the logistics system, there is soo much i am planning to add!

Drones currently in the mod:

Other drones will be added in future updates:

So far there are:

Drone relays for directing your drones along paths.

A drone controller, needed for your drone network.

To be added in future updates:

Each drone network needs a drone controller which links and holds all the variables for the drones and network blocks. Only one per network!

If it is destroyed then your whole network will need re-building so protect it at all costs!

Drones can also be set to follow the player. Does having personal defence drones sound fun!! No more need to be scared of any mobs! Just let the drones kill them for you!

Drones have to be crafted by placing the drone parts on drone frame blocks, and it will be automatable. Drone constructors and conveya belts at some point will be added in an update

Most blocks in this mod will have a custom model which take quite a while to make so many of the blocks will have a wip texture for a while and there hitboxes may change over updates.   I had to re-do all of the custom model i spent time in in blender because mcreator no longer supports 1.12.2 but all is for the better because now i can do even more to make this mod better.

Thanks! Its only this good thanks to the drag and drop editor in mcreator thanks to you! Hopefully the framerate in the block editor doesn't get much lower though as it realy likes eating my cpu lol

There is a ticket for porting the editor to Chromium in the future to improve the performance ;)

very nice! i like the idea of setting a path for the drones