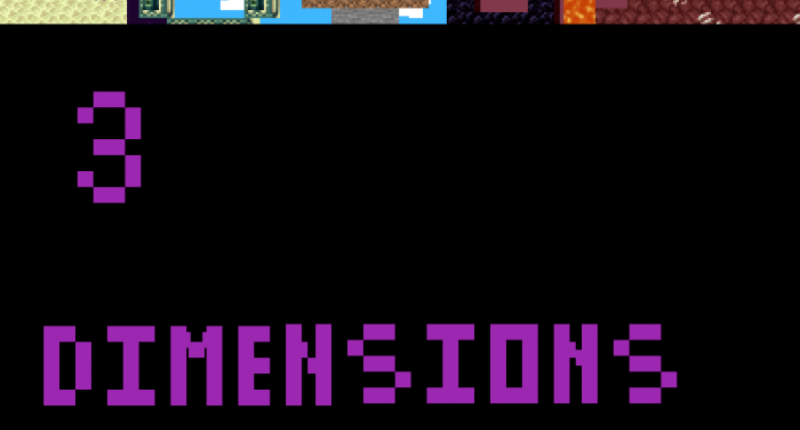 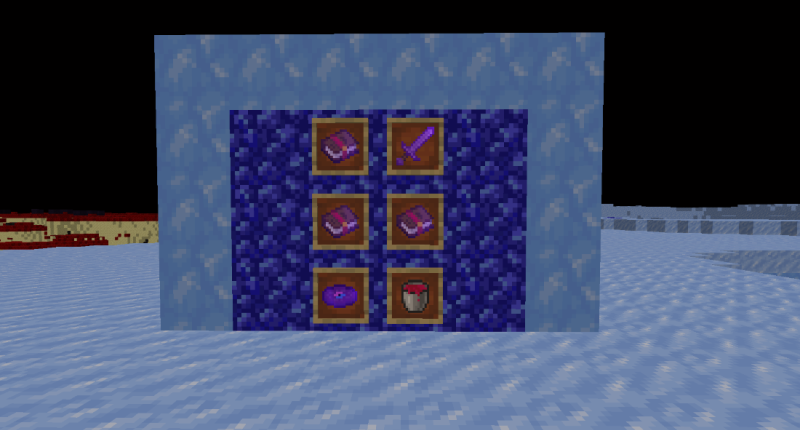 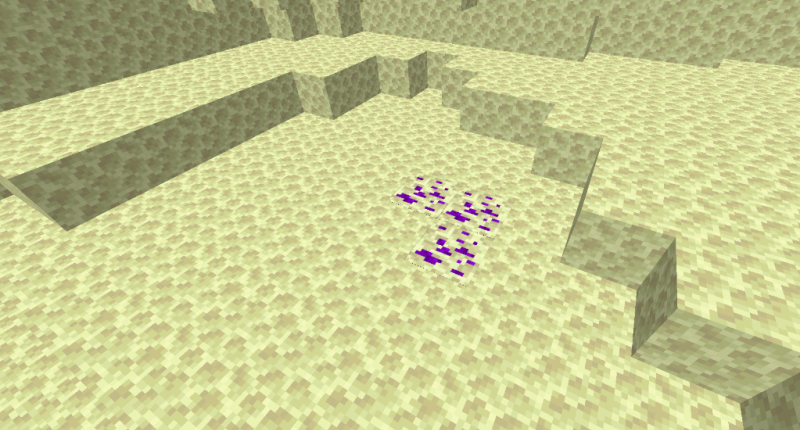 Enderite is a new material. Mine away! 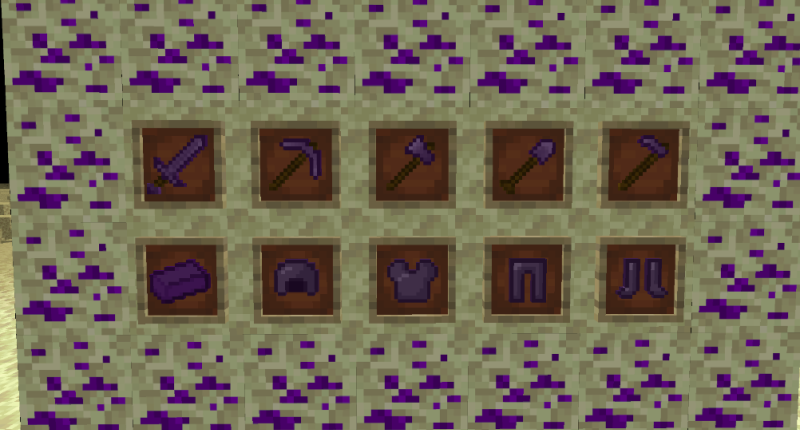 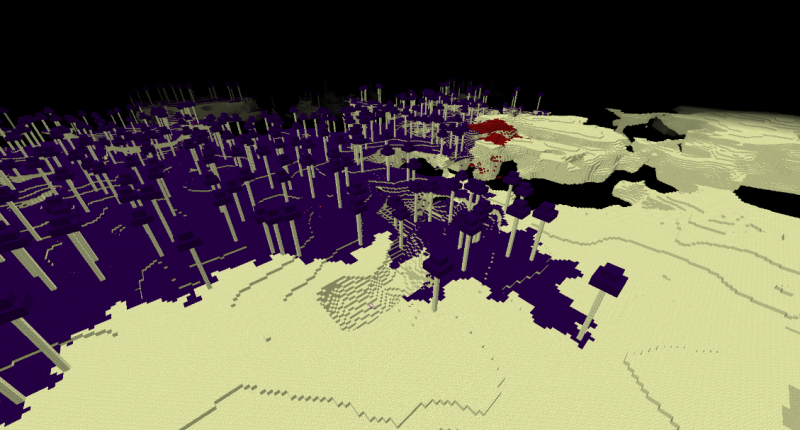 Hello, and welcome to the Deeper End! Enjoy your stay!
I added something new to all 3 dimensions, but this mod focuses on the End.
3 Dimensions' Discord: https://discord.gg/qZrkvTN

The Overworld
In the Overworld, at night, you might find the Golden Person running around. They'll run from you when you get near. If you manage to kill them, they'll drop a bunch of gold. If you get extremely lucky they might drop an enchanted gold apple! That's a lot of gold. Useful for 1.16 when you need netherite. This concludes the Overworld.

The Nether
I added another new mob into the Nether. The Magma Ghast is a smaller, rarer subspecies of the Ghast which loves nether wart, If you hold some It will follow you. You can sit on it and ride it at any time. Control it and move in any direction, except for vertically. If you press SHIFT to go downward, you'll just jump off of it, probably resulting in your death. SPACE won't have an effect. This concludes the Nether.

The Deeper End/The End
The biggest updated dimension. Make a portal out of Purpur Pillars and light it with a Void Steel, crafted using flint and diamonds. It will take you to the Deeper End. There are 3 biomes in the Deeper End.
The End Wastes
The default end biome. Not much changed here, except for a new mob. The Enderped will attack endermen with their pickaxes. If they spot you they will attack you on sight. They are the most fearsome and dangerous mob in the mod.
The Ender Woods
A dull biome, with Ender Nylium as grass and tall trees with Ender Wart as leaves and Ender Log as trunks. This new block is good for temporary uses but otherwise isn't too useful. Enderped also dominate the forests.
The Warthills
The rarest biome in the Deeper End. There's Nether Wart blocks everywhere, along with Endermen and Blazes. It's a bit barren, and doesn't really have a use otherwise. (Nether Wart blocks are now convertible into nether wart)
A miracle of metals: Enderite!
Look in the Ender Wastes and the Ender Woods. The end stone will appear enriched with a strange purple metal. Mine it away, and if you use a diamond pickaxe or better it will drop the ore. Smelt it into ingots, and craft your tools. (You need to use blaze rods rather than sticks to craft the tools or they won't work!) The tools have 2543 durability. They are more efficient than diamond tools, thus requiring you use diamond tools to break them. Make a block of Enderite and flex. You can make beacons out of them too.

The Real Big Update
Yeah, that's what the update is called. I finally(?) updated the mod, adding a new boss, lots of new blocks, new items, structures, and bumping the mod element count to 106! Here's some things added.
The Time Bender
Make one with Corrupted Obsidian and an Enderite Ingot. Charge it with diamond blocks, and you can right click it to bend the time flow.
Shadow Bricks
Find some structures made of it and you can take it all. Use a stonecutter to form new block types.
Ender Wood
A new wood type. Not much else to say about this, except it can't burn or be used in a lot of recipes.
Ender Anchor
A new block. Right click it when in the Ender Wastes (Deeper end only) and summon the new boss.
Totem of Shielding
Hold it and you won't take any damage at all. It's expensive though!

The Environmental Update
A new update just launched. It adds some more new stuff, like:
Void Iron
An ore found in the Freezing Islands.
2 New Music Discs
There are two new discs: Sky and Spring. Credit to CM14 for making them!!! Spring is currently unobtainable. To get Sky, look in:
Frozen Castle
A castle structure made of Ice Bricks. Look inside the chest for the Sky disc!
New Plants
Two new plants: the Voidlily and the Prickly Voidbush. Voidlily are poisonous, and Prickly Voidbush have sharp spikes.
New Ender Log Texture
The Ender Log didn't look like a log, so I changed it.
Corrupted Blade
A sword which doesn't have a sweep attack. It does more damage though!
Ender Milk
It's the exact same as normal milk.
More Ender Wood
I added Ender Wood Fences, fence gates, slabs and trapdoors, and stairs.
Ender Pumpkin
Pumpkins that are rarely found in the Deeper End. They look cool and you can use them to repel Enderped.
Powered Endermite
A mob that drops String. You can breed them with Void Fungus.
Curse of Breaking
A curse that adds to the durability damage taken for using a tool.
Ender Glass Pane
They're basically glass panes. That's all!
Void Mail
High durability, low protection. Find them on Enderped Shopkeepers.
Other changes:
-Tweaked the Enderped Shopkeeper's trades
-Golden People now drop random gold-related treasures
-Ice Brick Stairs were added
-A few more recipes are craftable with Ender Wood

Special thanks to CM14 for making textures for the majority of the mod! ChrisMinecraft14 on Minecraft or chris._.cord#4433 on Discord. He doesn't have an Mcreator account.
Hope you enjoy the mod!

There's too many features to really list them all so the description has most of the things in the mod. I'm also pretty lazy too.

Need ideas for what to add...

how about... A end stronghold... to another world? idk.