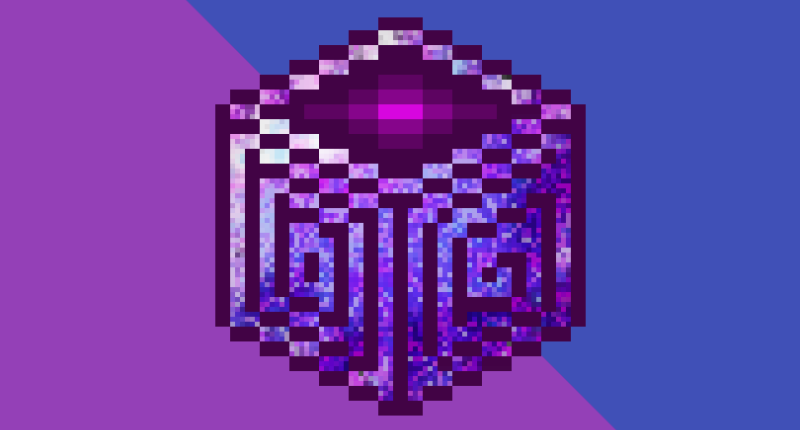 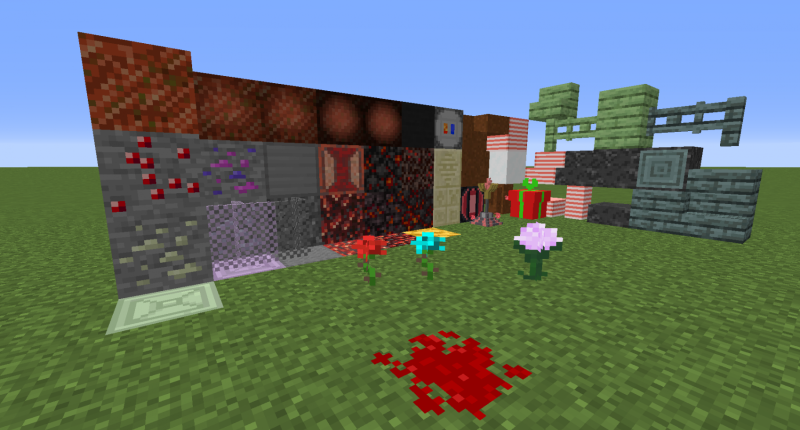 Every block as of 0.6.2 (Excluding cursed present--same model/texture as normal present) 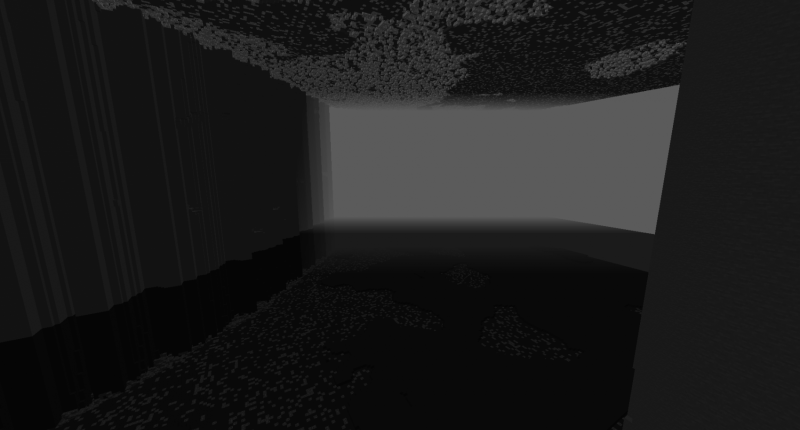 A Nowhere Rift, seen in the Nowhere Dimension as of 0.6.2 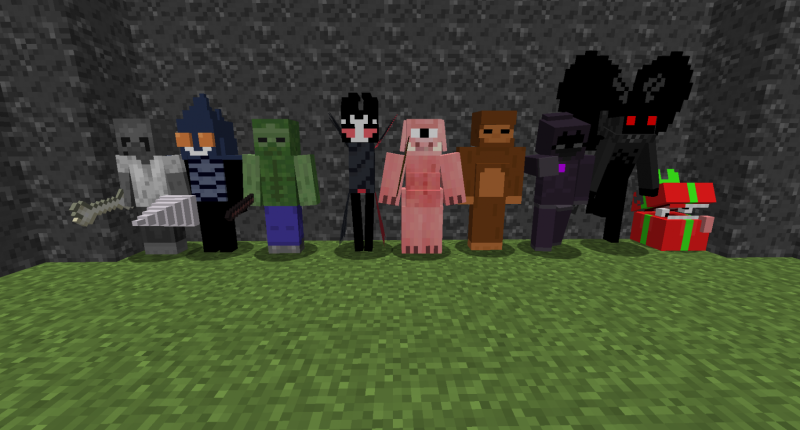 Mod has moved to Curseforge fully -- File too big

***Previously known as Genuinely Too Many Additions -- GTMA***

***This mod is heavily in development, please keep in mind most, if not all content seen is both subject to change and not set in stone as finished.***

Have you ever been playing modern Minecraft and think to yourself,

"Man, I wish there was a mod out there like Orespawn for modern versions.."

And if so, have you ever thought if it was completely different?

And once more, if the above wring true, have you ever thought that you wanted it to have genuinely too many things in it?

If the above applies to you, then you've (potentially) found the right mod!

This mod is best played with Just Enough Items for recipes.

-Many new mobs and bosses

-And so much more!

-The mana/xp system is 100% up to date and working with all mana items, En's staff, however, does not currently summon Dinguses.

-Crumbling Oak and Cactus wood now both have doors

-New structure, Abaddon Tower, (Drops not added for Abaddon yet)

-Asmodeus and Abaddon's Towers are both now more common

-3 new mobs; Abyssal Remains α, β, and Ω. These mobs are not yet done, as all have the same AI. They all spawn everywhere in Nowhere.

-Abyssal Remains 1,2, and 3 (potentially marked as ?, ?, and ?--issue with symbols and will be renamed next update if are all named the same) have separate behaviors:

-Abyssal Remains 2 will shoot the player from afar, dealing heavy range damage, at the cost of lower health.

-Abyssal Remains 3 will explode on contact with the player, but will not actively seek them out. Serve as essentially moving land mines.

-The Wendigo and Violet Winding have new, better models.

-Both Wendigos and Mothmen have new sounds

-Crumbling Oak can now be used for tools in place of other planks.

-The Decayed added; a zombie type that spawns in swamps.

-The Decay potion effect is also added, and predictably is currently only given through the Decayed. It, every tick, has a 0.10% chance to deal 1-2.5 hearts of true damage. This ignores armor, and can rapidly take the player out if they aren't careful.

-Fixes to every boss; they now grant the killer their achievement. The icons reflect this.

-Removed several achievements; they were unnecessary.

-Violet Boar now is struck with lightning every 100 hp lost, powering him up for a moment.

-Added Necrotic Charm, Skin Cream, and Ipecac.They make the holder immune to Wither, Decay, and Choking respectively. They are not currently obtainable in survival.

-The first two "hard mode" mobs; the Reaver and the Wardling.

The Reaver is a new zombie type that spawns during the night and spreads its plague through the Zombification potion. If an entity dies due to Zombification, it will become Zombified, though currently only the player and normal zombies have implimentation; turning into Infected Players and Reavers respectively. They do not burn during the day. They are made to give a further challenge to resource management in managing a plague at the same time as normal events.

The Wardling spawns in areas not directly exposed to the sky, and are miniature Wardens (1.17).

Currently both spawn in the Nether, which is not intended.

-The Violet Tome has been slightly tweaked in preparation for later, as well as to support JEI better--previously JEI would sometimes cover the buttons which I was not aware of, and solved by not only simplifying the work on me, but also by introducing the Table of Contents.

Only appears in the Nether, and drops Zalski gems when mined, which is used to craft Nowhere Portal Framings

a new Demolition class weapon, works similarly to the bombs in The Binding of Isaac, in where you place it down on the ground and it explodes after being set down.

A block that only appears in the first difficulty increase after entering the Nether. It replaces any generated and ungenerated naturally occurring andesite block, and when mined can be turned into Debris Scrap (texture may be bugged, program had a rough time with a later addition), which then can be turned into Netherite, though significantly more expensive than Ancient Debris and Netherite Scraps.

-Pigmen and Pigman Warriors can now be Zombified by Reavers, turning into Zombie Pigmen and Zombie Pigman Brutes respectively.

-Integrations with wood into other modded and vanilla recipes

Arch Skeletons are a new mob exclusive to the first difficulty switch. They are upgraded skeletons, and when they die, turn into floating heads. How fun!

-Zombification Cure (NOT IN SURVIVAL YET)

A vaccine used to cure mobs by hitting them. Creative only for this update.

Concrete that is, as implied, faded. Comes in every colour, with Black, Grey, Light Grey, and White all being true tones rather than slightly off shot.

-Most mobs now have blood particles for getting hit.

Every mob will soon, though many have unique blood because not everything in the world, real or fictional, bleeds red.

For all your inoculation needs.

Promised for a friend, sorry it took so long <3

Currently serves no purpose, will soon do as promised on Twitter.

Boon: a segment of wall from a torn-down building, with a very unfortunate soul.

Sky Island: no beating around the bush, it's the very original skyblock island all the way from beta 1.8

Warped Sky Island: like the Sky Island, but for Warped Forests.

-Blood effects can now be disabled

/Gamerule bloodEffects False to disable, default set to True.It is in the Misc section of the gamerule menu upon creating a world.

The rest of the promise, get it by wearing a full set of clown armor

A new helmet based on ENA (Joel G.). It changes emotion every minute in a chain of 5 individual masks. They each have their own potion effects. This mask cannot break unless it takes 250 damage in under a minute, which is horrific if you can accomplish.

Grass drops every crop in the game aside from cocoa beans, cactus, sweet berries, apples, and nether wart. This is how to get rice seeds.

Pigmen no longer drop 10-15 carrots, this was not intended in the slightest. They now drop 2-4

-Reavers now are slowed in daylight

-Boss Spawners now summon bosses on the block you right click, as well as Dingus and the Grimmchildren.

-Nightmare Lamps have been retextured.

-Rice and Mirror Masks should function properly for real this time.

-Wendigo Pendant can now be turned off with right click.

-Zombies now have a 30% chance to spawn with a stone sword post-Nether.

-Dimension stacking-- somewhat unfinished, but if you go below Y=-5, you go down a layer, go above Y=256, you go up a layer.

-Void Sickness, a new potion effect that occurs on the lower layers of the End and Nowhere.

-Rucksacks now use any type of leather, vanilla or modded, instead of exclusively sasquatch fur.

-Wooden, Lithium, and Golden pickaxes now make stone drop pebbles instead of cobblestone, which crafts into cobblestone with 4 pebbles.

-A new tool, Stone Hammers, get more pebbles from stone. Will be more important later.

-Walking Stick, grants speed when equipped in your offhand.

This is the REAL last update here on MCreator, it's quite literally 19.8 MB, with 20 MB being the max

The Curseforge page is 100% the only other place SoE is updated from here out.

If you like this mod, you may be interested in my other mod, Linden Files (aka my side project)

If things go to plan, a lot of things

I Just Like Your Sarcasm, Its Perfect!
Great Mod By The Way

Can you create a GUI on it? Because I wanna know how to pass it, where are structures, at least in Curse Forge add a more detaliate description of what I have to do, like how to summon Grimm where spawn Mothman...

Touche, I definitely should, but until i do i'll tell you those things;
Mothman spawns naturally in hills at night, though it is rather rare.
To summon Grimm, you need to craft the Grimm Badge and right click it on a Nightmare Lantern (one of the only blocks with a custom model) in a Grimm Theater.
The objective, at the moment, is mostly up to you, but I plan on having a Terraria inspired progression system, or in the current state of the mod, kill all the bosses, and get enium armor.

Can you add more hollow knight things, because the creators of hollow craft are very slow and I like that game so can I ask you to add more discs and add a new attack to Grimm; he shots ghast fireballs everywhere and you have to dodge it and maybe it can teleport to you in 10 blocks radius so u can't escape.

I'm planning on making an add-on to this with more Hollow Knight content, due to the fact I want SoE to be (mostly) original, but the new Grimm attack is a welcome thought

Where should I suggest my ideas, I mean here, private mail(Outlook or Gmail) or discord server if you have one, or in other links (like that where you may comment)

Anywhere really, I check comments and replies on both here and curseforge
You can also reply to one of the tweets on @tzeode but whichever one of the 3 are the easiest for you work

Welp i thinked and ill say; ill come back to feedback your mod later (in days or months) cause im busy rn
srry i wasnt typing anything here but im rly busy this months so i hope some1 will type a comment and ill recive a notificaion on gmail to dont forget to chat here